So here's what looks like a simple #226 Morris Mini Minor, one of the later editions in red-purple. Look underneath, though, and there's a drilled hole and that makes it a bit special and possibly one of my rarer items.

I found it for sale at a very cheap price, just a few pounds, probably because the paintwork has one or two small marks and there are a few of these around at the moment. It really was only a chip of paint off the boot, though, and some loss on the risen lines round the roof and on the bonnet. What the seller didn't realise was that a company called Fernel Developments Ltd made two games in around 1967: Monte Carlo Rally and East African Safari. In these games there was a device that pulled two Corgi minis around a track. The minis were usually #226 in lilac blue with either Monte Carlo stickers (often with the 117 number from the Hillman Imp decal) or East African Safari stickers which were the same as used on the VW1200. Here are the only images I can find of someone's rather damaged one. 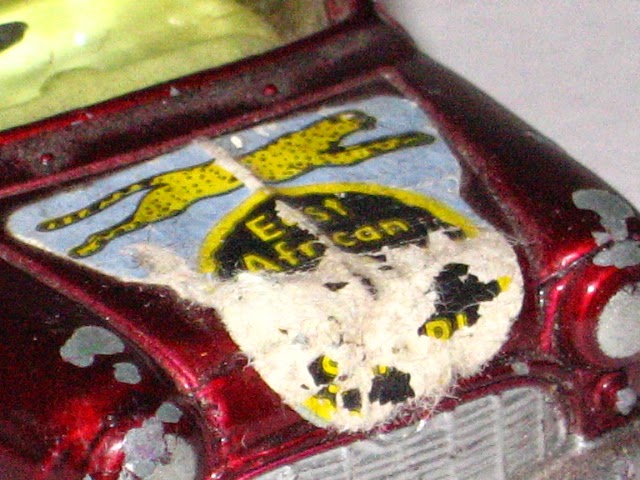 Mine doesn't have the sticker but I can obtain one for the bonnet. I am not too sure what were used for the numbers, though. That needs a bit more research. There have been one or two lilac blue minis going through Ebay and these have made crazy prices in hundreds, being rare items and collectors do like to get a complete set of the different mini variations. What I never seen to date is a red-purple variant for sale. It would appear to come from the later East Africa Safari version and must have been a late version of that game too as the colour didn't appear until much later and, according to this expert, it appears to be the very last of this type. So I have a feeling this could be very valuable indeed.

No idea yet how much and I haven't put a price on it on the site. Someone somewhere will know about these things, hopefully.