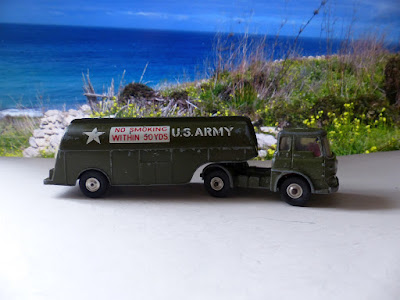 I couldn't resist buying this old Army Fuel Tanker that was going cheap and which had caught my eye because of the cab. As far as I know all the 1134 models have the old 'Big' Bedford cab.

Then I started to think about it a bit more and remembered that the other two uses of the tanker section were the Mobilgas and Milk editions, each of which gets issued with a new cab and, in those cases, a new number.

The US Army fuel tanker first appears in January 1965. But the Bedford TK style cab had been pulling the 1131 Machinery Carrier and the Low Loader in November 1963, more than a year earlier! Indeed, it is that TK cab that gets to pull the US Army Machinery Carrier issued as 1135 at the very same time as the 1134 Fuel Tanker.

Whilst I appreciate that the Mobilgas and Milk tankers didn't get new cabs until later in 1965, it does strike me as most odd that Corgi should have attached the old S type cab to the Tanker and the new TK one to the Carrier when the TK would have been then then 'current' cab for all these articulated models.

It is, therefore, entirely reasonable to see a 1134 with the TK cab but what I feel is that this is a combination by someone at some point in time and that somewhere in someone's loft lurk a khaki 1135 and an old S type cab in a similar colour. Whilst what I have bought is possible to have existed, I suspect it didn't really.

So now I am searching for old army trailers and khaki S Type cabs! Both 1134 and 1135 were produced in very paltry numbers, though, and had a lifespan of only a year or so at best. They're quite sought after now so my chances are pretty slim.

Corgi's second European model appears this month in 1958 in the very attractive and accurate shape of the Mercedes 300SL.

You will find this mostly in white with a blue interior. The other colour scheme is blue with a cream interior. Neither are particularly scarce as this was a popular model and sold very well. The ones to look out for are those with shaped fixed wheels. In production until 1960, or possibly early 1961 when it was replaced by a version with suspension, it can only have been those produced late in the day that will have shaped wheels. 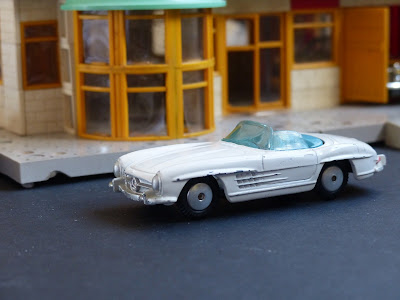 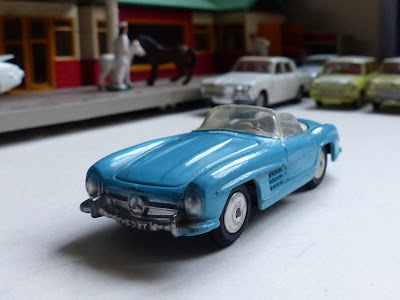 There are a few examples around which appear to be 'crossover' models where the white or blue body has a 303S chassis with suspension. So you cannot assume that if the model is white or pale blue it will be 303! The suspension is not always obvious on the later models, getting quite stiff in some cases, so sellers often make mistakes with listings. One thing seems certain: if it is shiny silver and/or has a strip then it is the later 303S.

Something else that people get wrong is the driver. The 303 models did not have one.

Corgi fitted quite a solid screen to these models, the front windscreen being supported by the fixed side windows and the perspex is rather thicker than was used for the earlier open top cars. This has helped a good number survive but if it does get damaged then, unlike the others, you cannot just slot of replacement screen in the hole. Perhaps with some care a replacement screen could be glued in place without being too obvious but it is otherwise a task that requires the base to be removed.

The other model fresh to the shelves in your local toy shop in august was another use of the Karrier bantam casting, now to produce this attractive Lucozade van. It has a nice vertical opening door at the side, a plastic element going up and across the inside of the roof most realistically. 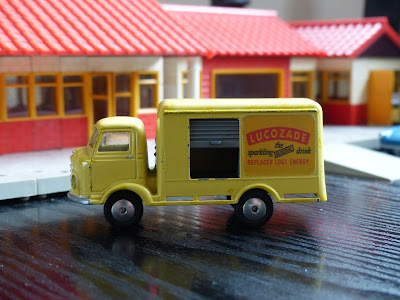 This model can be found with fixed smooth or shaped wheels, the latter being less common but not hard to find as this stays in production through to 1962, a year or so longer than the Mercedes.

I often wonder whether Corgi received some payment for promoting the drink. This was only the second occasion in which a commercial product had been advertised on their models, the first being Moorhouses a few months earlier.