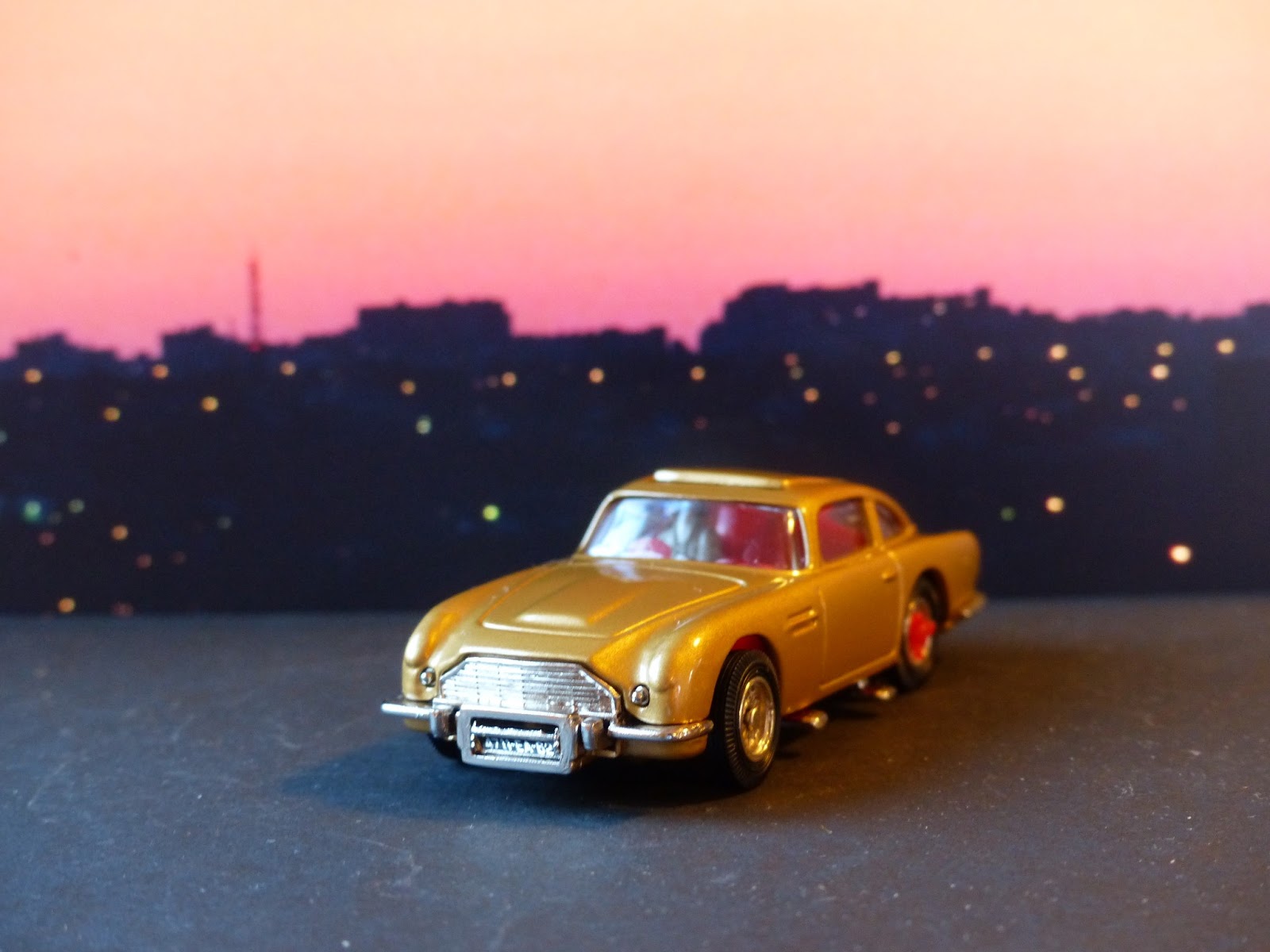 You may have noticed that some 50th Anniversary editions of the James Bond Aston Martin have made their way now on to various auction sites. The 4203 model is very similar to the 4201 model that came with an Oddjob character but without the tyre slashers and in silver as well as syrupy gold. They were sold out as soon as they were released so the scarcer gold ones are commanding prices from £80 upwards. Even the 4201 model is being promoted, without the box, here and there, in the hope that some people will pay that sort of money for the not particularly uncommon version!

I was intrigued to know whether this was, indeed, something approximating to 1:43 or another of the many 1:36 models and looked at the Corgi main web site. There is a Skyfall edition mentioned in the catalogue they issue - in silver but that is definitely 1:36. That wasn't anywhere to be found on the site, though. What I did find were the two 4203 models S and G for silver and gold which, of course were sold out. Next to them, However, were 4204S and 4204G with Pre-order links. Both are a modest £19.99 and available in May.

The interesting thing is that the illustrations look identical and when I got hold of the images I discovered that the file names for those promoting the May issues are the same as for 4203! So, unless there is some significant change being made to the packaging, I would be inclined not to rush after the £80+ models. There will be plenty around at a much lower price soon or you may still be able to pre-order at cost price today.

I am not a massive fan of the foreign made editions and actively disliked the 1:36 models which have all seemed quite cheap and nasty. The 1;43, or thereabouts, versions do feel better although the paint looks very heavy still. These are not in the normal run of what I write about but I thought you might like to know. 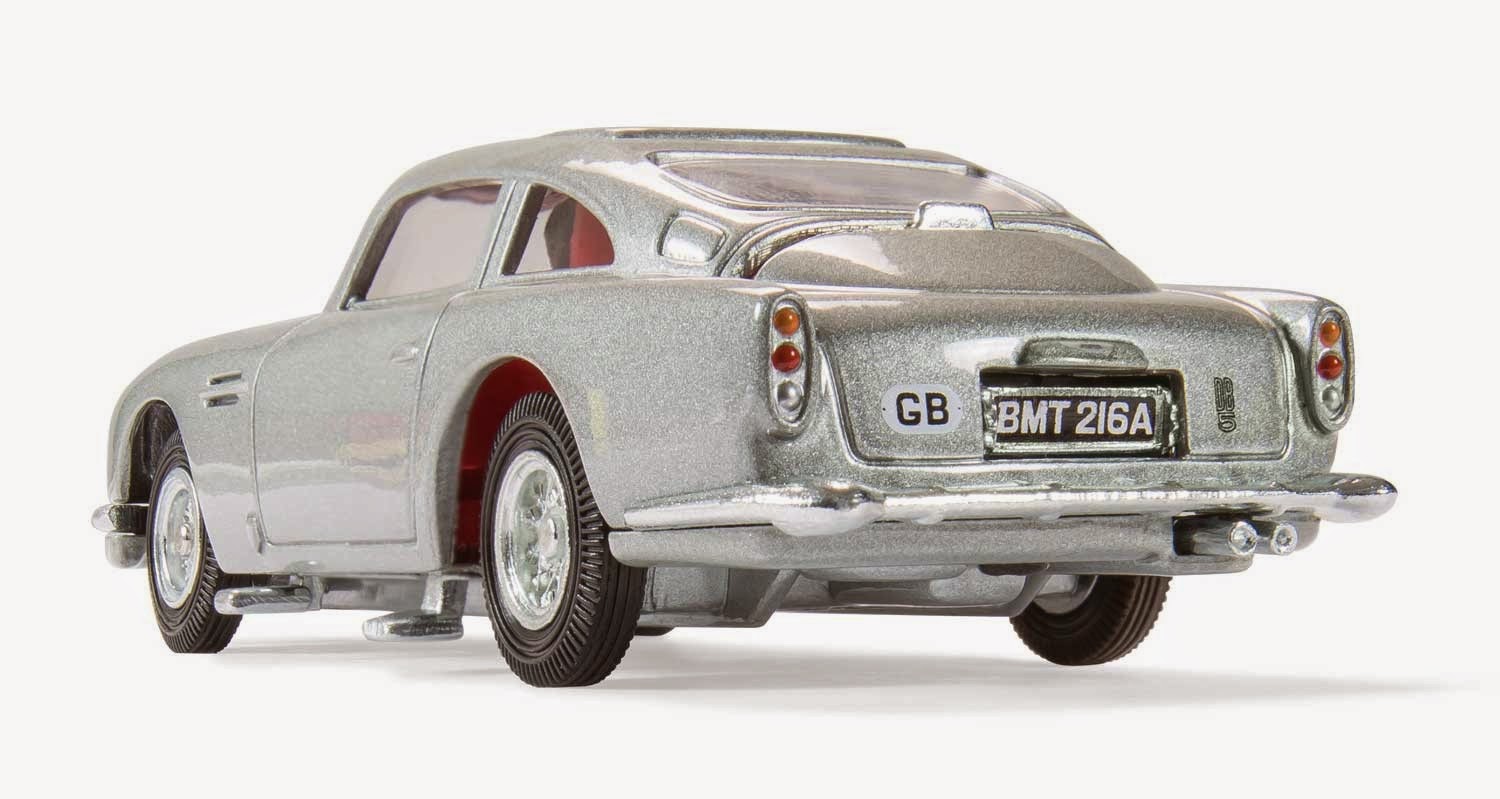 You do meet nice people in the world of Corgi Toys

It is always nice to be appreciated! I had this note from a collector in the States which helps make all the time I put into this worthwhile.

Andrew - Just wanted to say I love your website. I am 53 years old - been hooked on Corgis since my very first Land Rover. My parents would get me them for birthdays, Christmas, and after a haircut I was allowed to pick a new one out. I have all my originals and have been trying to acquire as many top quality or boxed units as possible. I'm on the east end of the US. My collection is in the range of 150 cars to date - all pre 1973. I recently acquired a 1401 boxed service ramp. Great Toys - seeing them brings me back to my childhood. Hopefully this collection will be worth something one day! Thanks for all the information you provide! - Dave

A Sun RAC Rally Mini at the Bayko house. 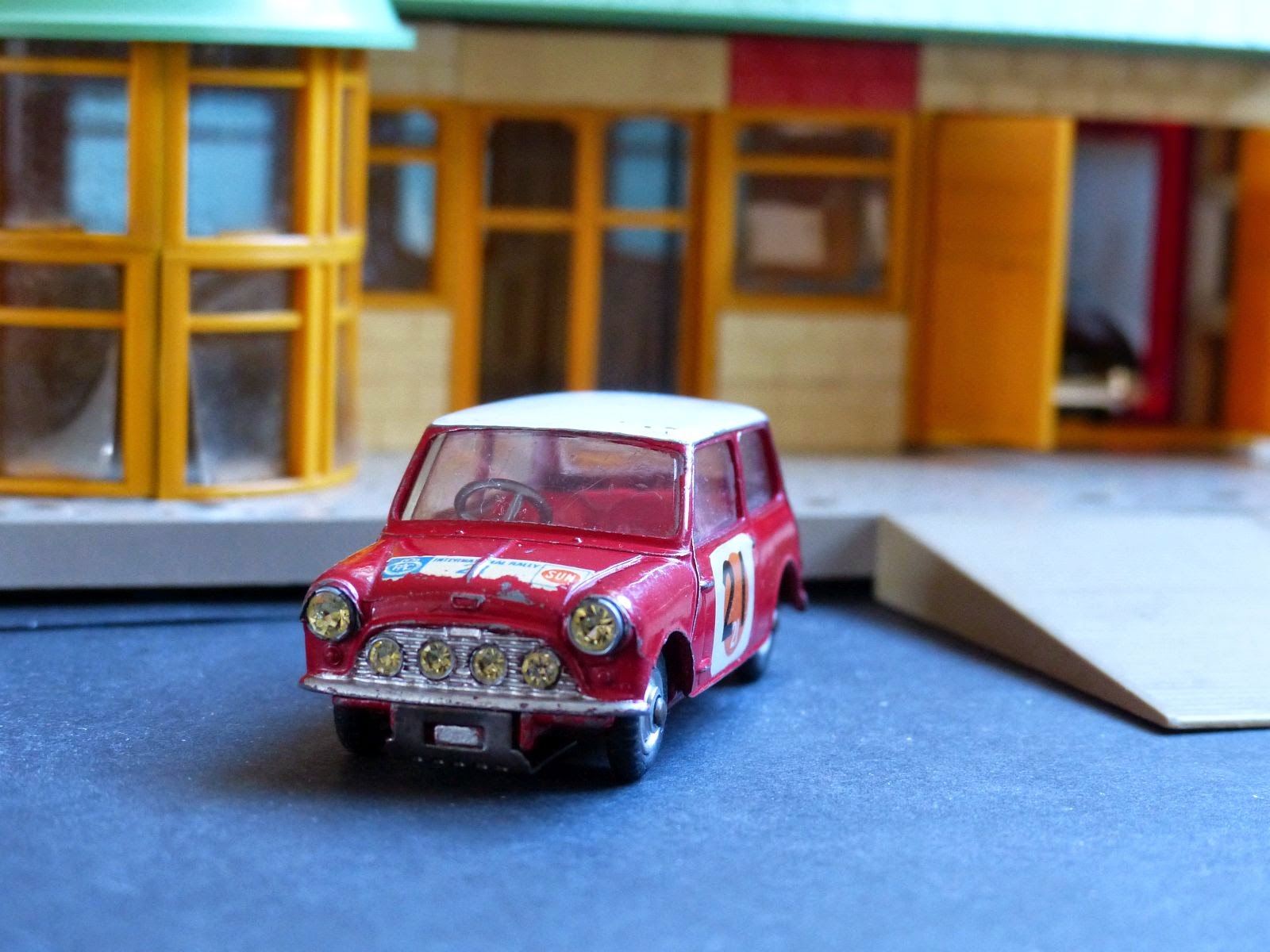 The last but one mini has come along at last. Quite a decent looking #333 which has a large chunk of paint missing on one side but that's about all. There were no door transfers so I added some new ones which seem to be the right colour, unlike some that I have seen which are almost as red as the car. 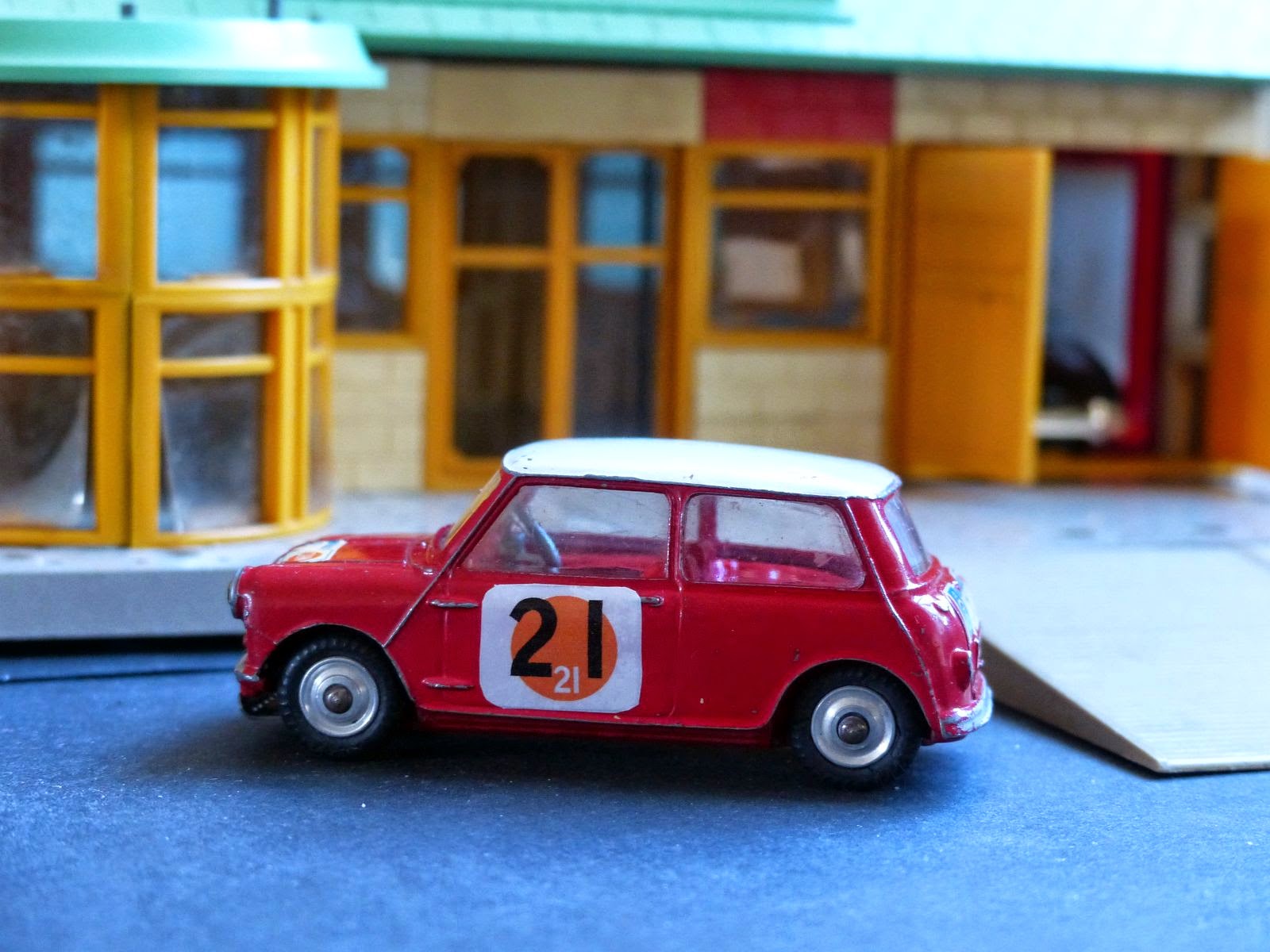 The bonnet and boot transfers are original and sort of mostly there so I'll leave them. The new ones were from a chap with nothing better to do in Cambridgeshire. They came all as a single sheet, though, and so required cutting out before soaking. You try cutting those small curved corners! Impossible. But the ones that I found ready-cut were definitely the wrong colour so I went for these. 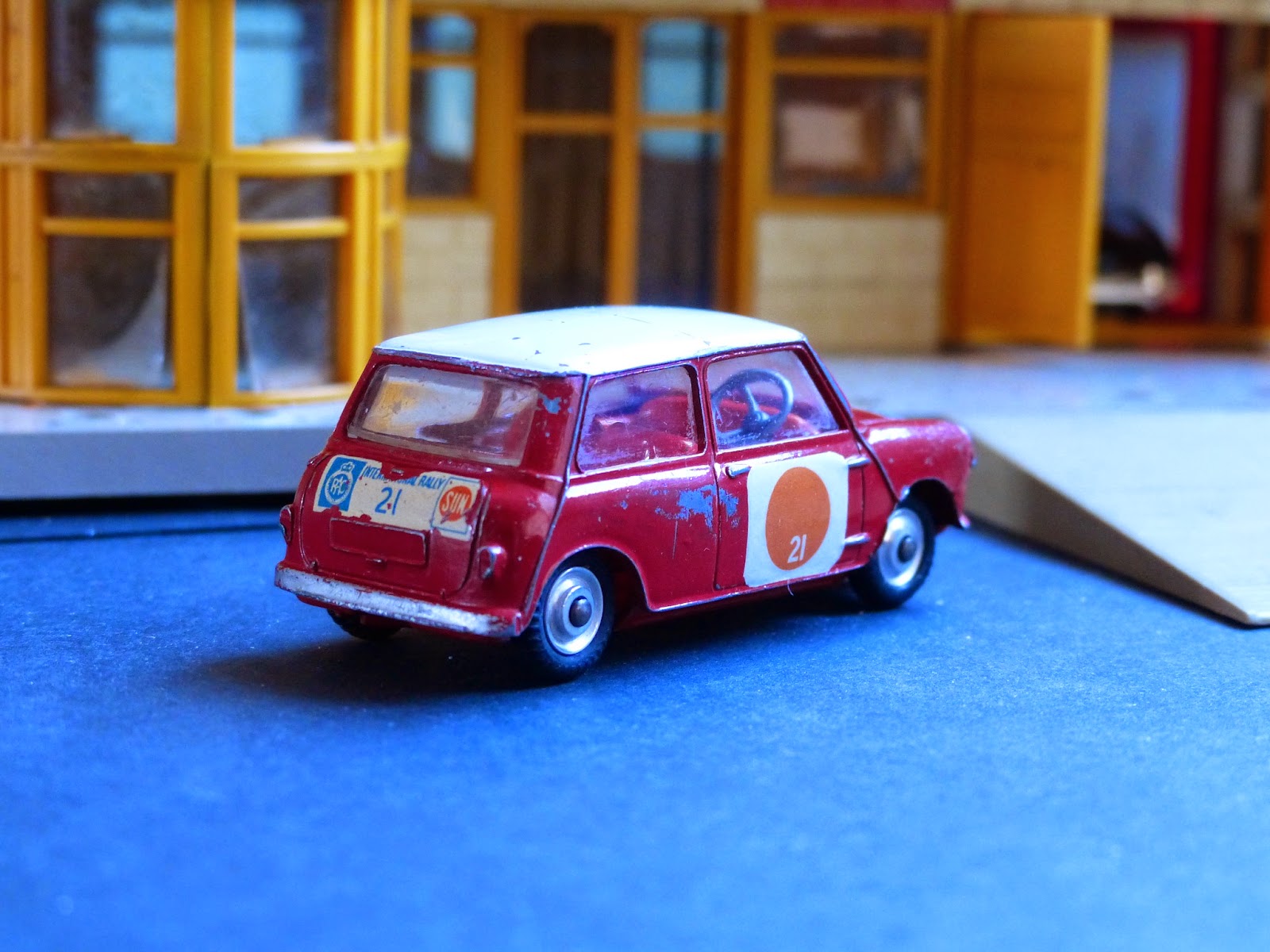 Observant readers may have spotted that the background I am using for many photos now is some strange looking building. It's a Bayko house, made from a set I had when I was 11 or 12 and of the same vintage as the Corgi Toys I had in the mid 1960s. The set is really quite big as I added several new bases and extra bricks and windows at the time. I was particularly fond of windows and most of my houses had as many as I could fit in!

I shall use this or, as time progresses, other designs of houses for future photos and not having a computer screen lighting up the wrong part of things on darker days will make for better photos too with a bit of luck.

This mini is the RAC Sun Rally version which has four jewelled fog lamps as well as the usual two headlamps. Only available for a short time in early 1967, surplus production, such as it was, finished up in the car transporter gift sets! Ridiculous. They were also the main source of the purple Rover 2000, the bronze Hillman Imp and the very elusive Whizzwheels Mini Marcos in blue. There is an article on that topic in my head but I'll have to do a bit more research first. 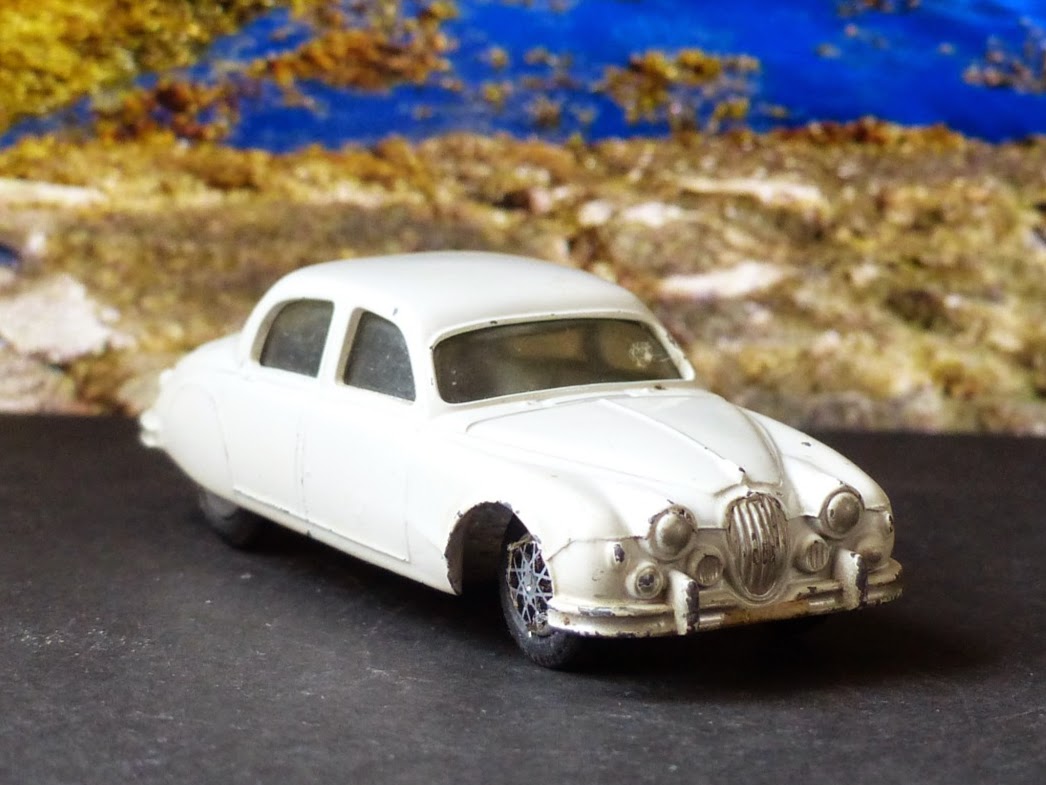 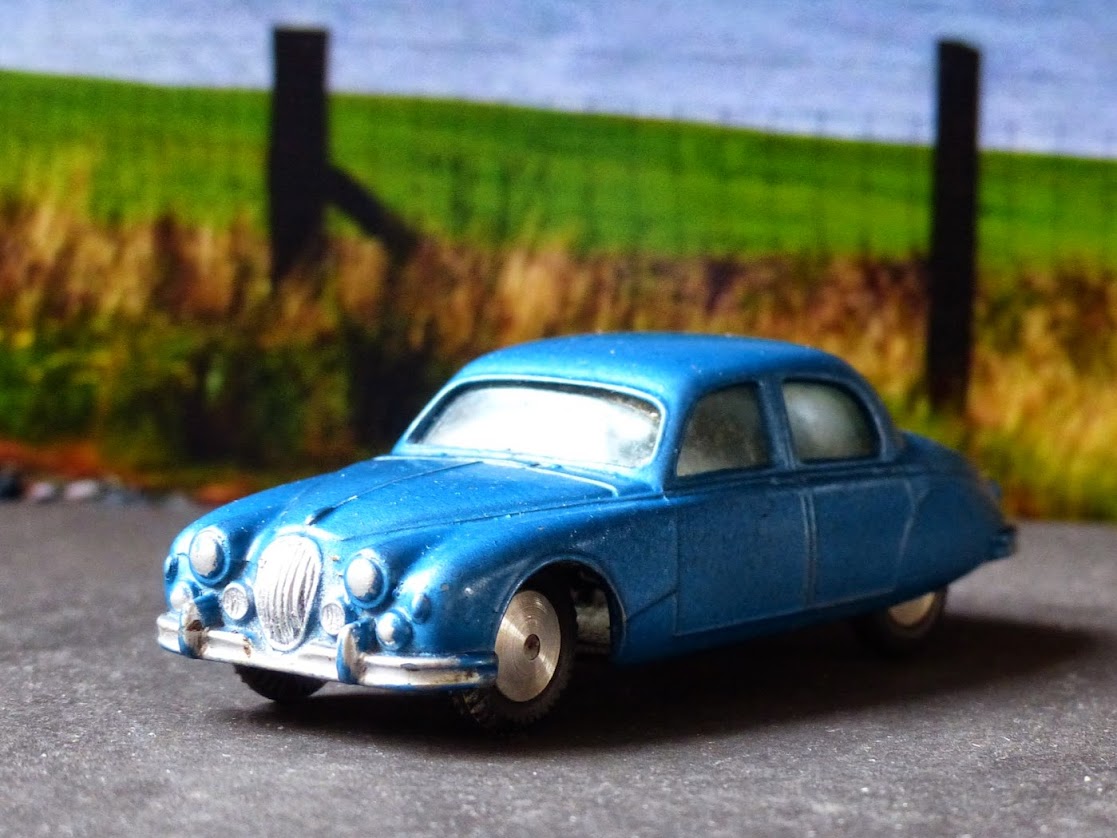 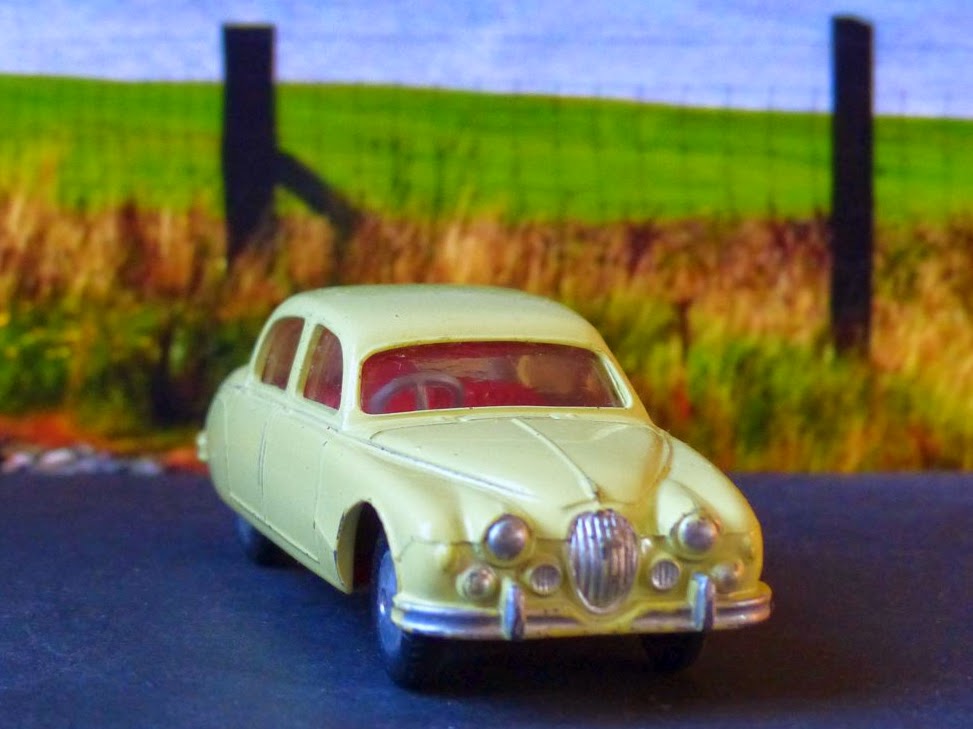 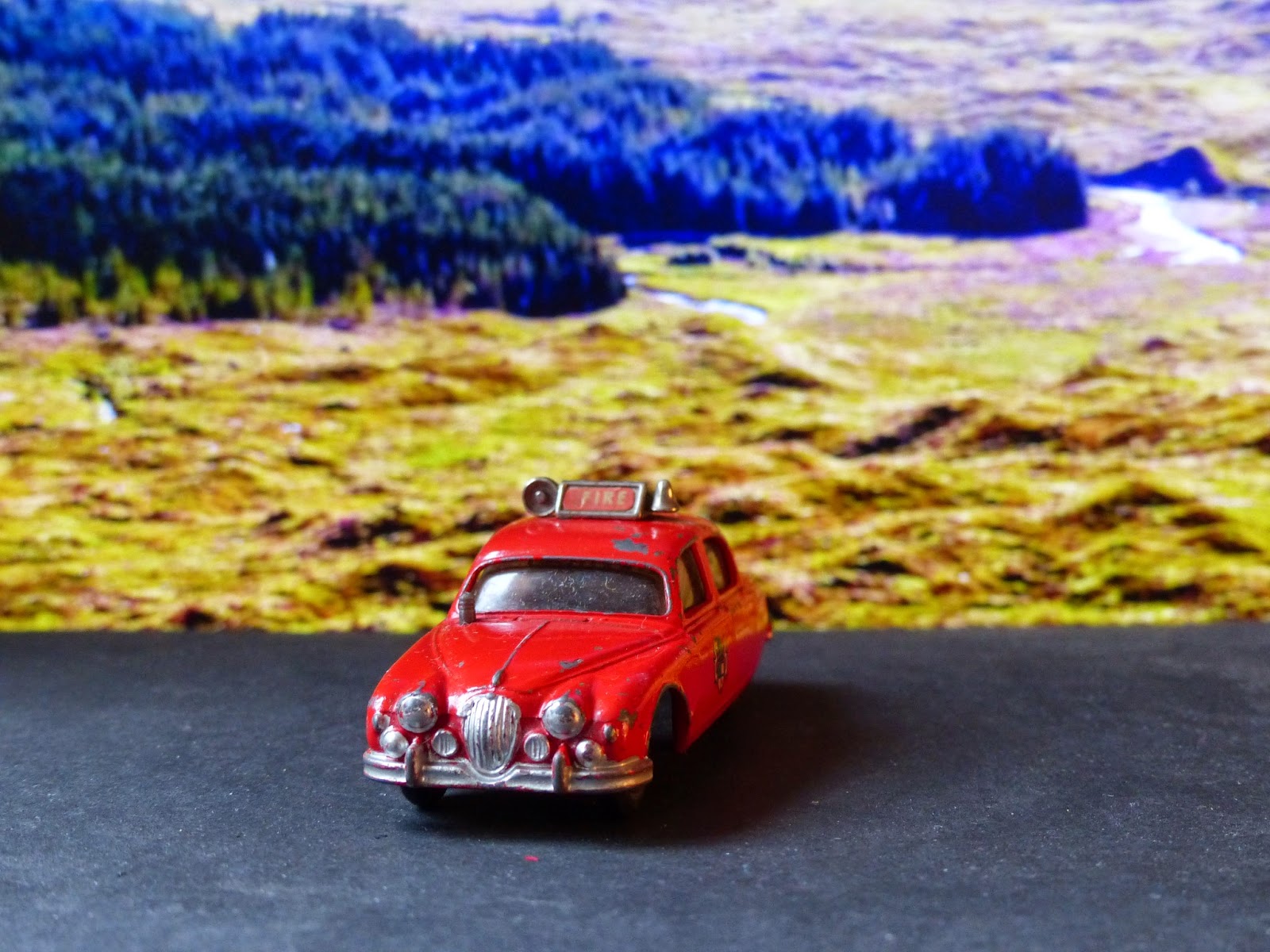 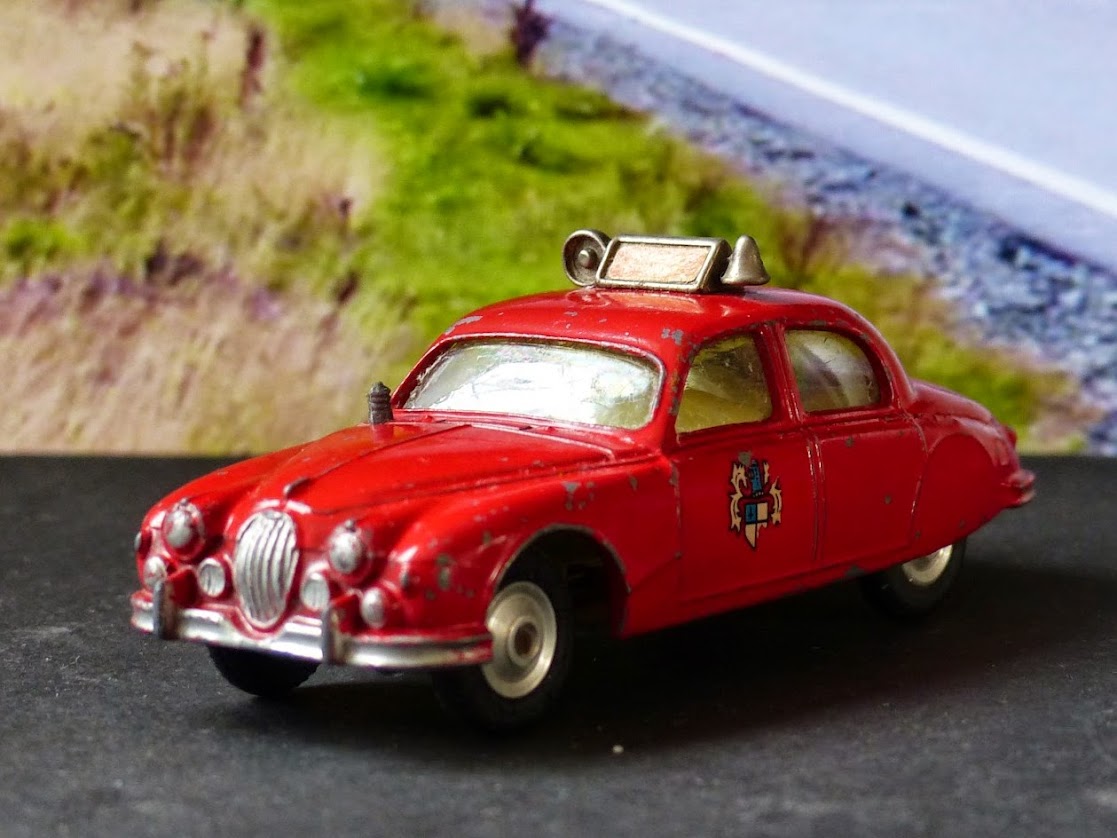 Jaguar were well represented by Corgi. Whilst there would later be the lovely little E type, its annoyingly larger cousin fastback and a whole Dulux paint chart of Mark Xs the first was a Jaguar 2.4 litre - the first type with fewer vertical lines on the grill.

#208 comes out in 1957 in two versions - white for the normal one and a nice metallic blue for the Mechanical one. A couple of years later they are reviving the original models by giving them two-tone paint but the Jaguar gets the roof device from the Riley Pathfinder Police car and red paint to make it a 'Fire Chief' car. No, I'd never known a Fire Chief with one either.

Suspension and seats get added in late 1960 and both #208S and #213S extend the life of the cast for a couple more years.The Fire Chief car is otherwise virtually identical but the saloon gets a creamy yellow flavour of paint. Neither the white nor the yellow really worked well and the car never looked as good as a model as it did in the flesh. Corgi did achieve some excellent replicas in 1:43 or thereabouts but this wasn't their best effort.

For all that the saloons sold fairly well, a good #208M being the hardest to find now. The scarcest of the five is #213S - and do remember to check that it has the siren and bell attached! 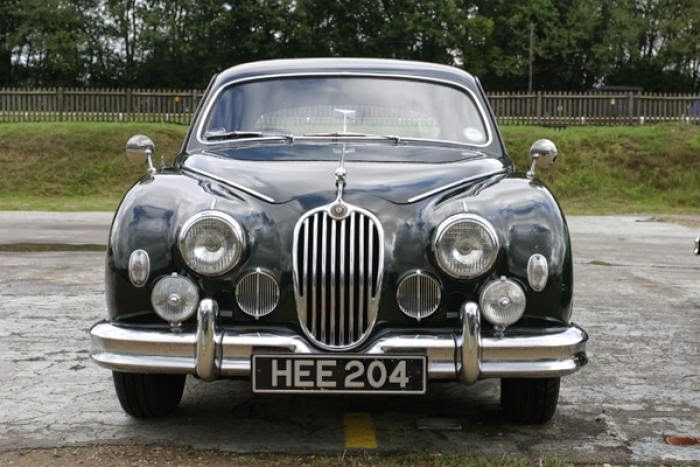 I thought it might be helpful to look at just what the Scarce List Top 20 would look like. This excludes the commercial lorries and military equipment and specific colours. I have had to put the Pop Art Mini at the top as it seems to command such crazy prices that it must be the rarest although I have not seen any production figures. You do sort of wonder whether it really is that rare but I will go along with it for now.


Land Rovers take positions 2, 3 and 4. #406S I didn't even realise existed and it isn't even mentioned in many of the reference books and, whilst I don't know the production figures, I reckon it is a reasonable guess to say it will be pretty damn low. If you missed my earlier post, #406S is a yellow Land Rover Mk 2 that preceded #438 by just a few months.

No.3 I do have figures for and I have a boxed #500 Land Rover but cannot tell the difference between this and #357. So the first one I have numbers for and which is identifiable is the RAF Land Rover Mk2 with interior and suspension. It came out at the same time as #406S but disappeared shortly afterwards.

The Rover 2000TC is the metallic purple Whizzwheels one and will surprise quite a few people but it really was not around long and maybe that paint flaking as it does led to an early cut in production.

The little Fiat Ghia 600 Jolly is the yellow one that mysteriously gets issued separately to its sister #240 and stays around for just a year or so at most.

The next one I have added in as another guess. From observations over the last year or so I can honestly say that I have only seen one or two of these for sale anywhere. It is the Whizzwheel version of the #341 model released a little earlier and was not around for very long at all. The Mini Marcos can be found in white and, very rarely, blue in a set with a car transporter. I have a feeling that the blue might even top the list if we were looking at individual colour versions of cars but, without any information on that at all, I cannot really know.

The short lived and not particularly popular Mechanical versions are all near the top of the whole list and six make the Top 20, topped by the little Austin A40.

Five of the trusty Bedford CA vans make the Top 20 too. That could explain why I found it quite difficult finding them myself and they all featured in my 'wanted' list well into a year after I started trying to get everything. Indeed, I am still looking for #423 Fire Tender.

None of the Army stuff sold brilliantly - if I had included equipment and heavy lorries etc, then the Top 20 would have been mostly military items of one sort or another! As it is, just the little VW Microbus in Army Personnel Carrier form makes it with the two Land Rovers.

The big surprise for me is the Monkeemobile making the Top 20. As a big fan myself of the TV series and (most of) the band's releases I wouldn't have thought its sales would have been particularly low. I can only guess that it was a bit late appearing. The Monkees were at their peak in 1966/7 but this didn't emerge until December 1968 by which time the band were not getting the best of promotional support.

Remember that this is not a list of the most valuable Corgi Toys. That list would have all sorts of rare colour variations of what might be otherwise quite common models and I have not thought about the various commercial editions, like the yellow Colemans Mustard mini and vans with special brand names on. It's just about production numbers and none of these listed were around for very long. 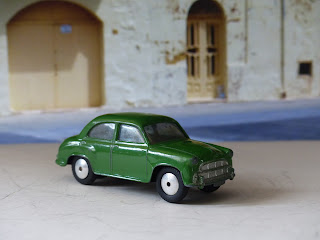