These are the photos of my #406S Land Rover that has just come in. Even though it is missing some paint it is something definitely a little special and won't be up for sale for a while.

A car you probably wouldn't see on British streets at the time was the Oldsmobile Toronado. Corgi had this in two versions, Both looked fabulous and worked well as a model, being essentially exactly the same apart from a switch to Golden Jacks on the second.

All the other introductions of Golden Jacks would be on new models. Even the Rover 2000 was quite different to its predecessor. The colours used were really attractive. All the #264s were metallic blue, with quite a few variations within shades, from something approaching turquoise to quite a dark colour. The 276s, however, came in metallic red or bronze. By far the majority were in red; bronze models are sought after and quite expensive.

As far as I can tell, all the #276s should have a tow bar. If yours hasn't got one then it has broken off. It was a just a grey plastic thing and not very well fixed and could be removed without leaving any trace of having been there. It is a different story, though, for #264 which was produced with and without a towbar. Those with a towbar would have been produced for the Glastron speedboat Gift Set.

The wheels would nearly always be spoke effect cast hubs on #264s but there are a few early models around with the normal wheels. You'll find Mustangs and Sting Rays with normal wheels on early versions too and these are generally quite a lot scarcer. Of course, there are also many models where normal wheels are the most common with only later versions having the cast wheels. That's a topic for another post one day.

Take a look at the real thing. It is quite remarkable how accurate Corgi's casting and design was in those days.

I didn't even know there was a #406S! Quite how I missed that I don't know but I am not the only one as it isn't featured in the main sources and books I have been using, including The Great Book of Corgi that many have taken as some sort of bible. Having said that, I have noticed errors in colour varieties so I know it isn't reliable.

I did find a reference to this Land Rover where an immaculate one with a 406S printed box had sold for £1800 and, weirdly, Toymart list it at a ridiculously low £105 but there's no illustration and my guess is that no-one has been there to update it. 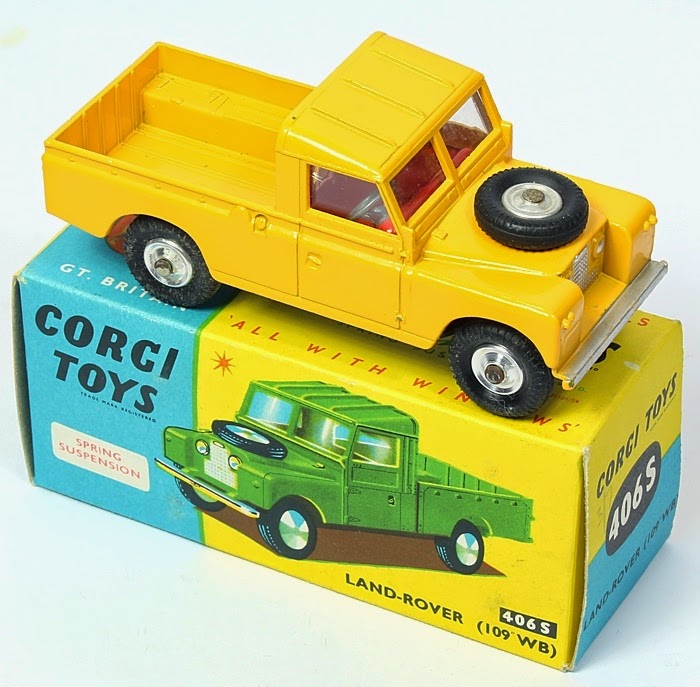 Rather like the Pop Art Mini that is fetching crazy prices, I concluded that I wouldn't stand much chance of getting one of these. Then one popped up on Ebay and no-one seemed to be bidding. I can't believe my luck but I have got it for less than the postage will cost me! 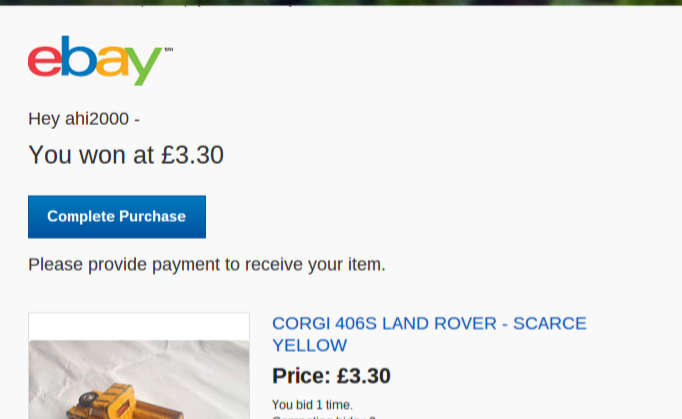 I don't normally share purchase prices but I shall not be selling this for ages by which time I should imagine this post will either be well buried or it won't matter a great deal as someone will be keen to buy and not worry about my profit margin.

I can only guess that, despite the 'scarce yellow' headline, people have confused this with the common pale brown #438 or, perhaps, thought that the S was a mistake and it was a yellow 406 and not appreciating that that would have had a black roof,

There is another yellow type 2 Land Rover - 416S produced for the Belgian market with TS logos. That is not the same shade, though, being much more brown-orange shade of yellow.

This is really a most intriguing model as it appears to be the second type of Land Rover which would be #438 for all other issues. It had suspension and the red interior that are the same as would be used in others. It is a jolly colour and you might have thought it would have sold well had it remained in production but that was not to be and for reasons known only to a few people at Corgi 406S quietly ceased and 438 was on the market from December 1962. It was late 1962 when Corgi came out with the suspension versions of other Land Rovers - the 416S RAC and 351S RAF Weapons Carrier as well as 417S, itself an odd thing that is pretty much indistinguishable from 477 other than a different detachable cover. 406S would have made sense if it had been 406 with seats and suspension but, as with the others, the cast was upgraded too so this was a totally redundant model almost as soon as it appeared and hence its scarcity.

The one I've bought certainly doesn't look worth much more than a few quid with its battered paintwork but it isn't that bad and, until I strike lucky again one day, it'll take one of the star places in my collection.

I will add photos of the actual model when it arrives.

Watch Corgi Toys being made in a 1960 video

Here is a splendid video of Corgi Toys being manufactured in Wales in or around 1960. I spotted the Fiat 1800 and some Land Rovers but that's about all from the first viewing! A fascinating few minutes and so pleased someone went to the trouble of saving this!