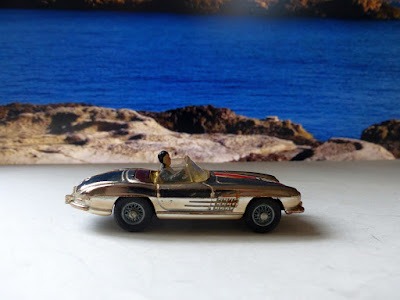 In a photo of big, blue plastic container full of old toys at an auction house somewhere in Brighton I spotted a Mercedes 300SL. On its side. It was the only one on its side and had it not been there and in that position I would not have realised that here was an example of the very rare 303S with wire wheels. The next problem was bidding enough to win it. There were ten or so decent-looking Corgis in the box and maybe twenty other models that I didn't recognise and a bag of catalogues or leaflets.

I was lucky. No-one else seems to have noticed it or considered it of much value. It was, fortunately too, one of those quite general auctions and these were the only vintage model cars appearing so it doesn't appear to have attracted the interest of dealers or wealthy Corgi collectors.

This is, indeed, quite a find. You may remember that some years ago I had wondered aloud whether these actually existed. The entry in the Corgi Catalogue of 1965 I had thought, at one point, referred to the model they brought out with cast spoke-effect wheels. Then I spotted a 304S at a dealer and began to search in earnest. I failed to find anything and finished up making my own!

This particular model is not just a rare one with those wheels, though, but also produced in the gold mirror finish which is quite different to the silver edition. This makes it even scarcer and I really do not expect to see another any time soon. The silver 304S sold for around £400. This one, I feel, should be worth a lot more. It is not in perfect condition but the windscreen is sound and there are only tiny marks to the bodywork. The slightly messy stripe tends to spoil its appearance but I am not going to attempt to clean that. Reflections and shadows really do not do justice to the appearance of this model. The driver is original and the old suspension system works. 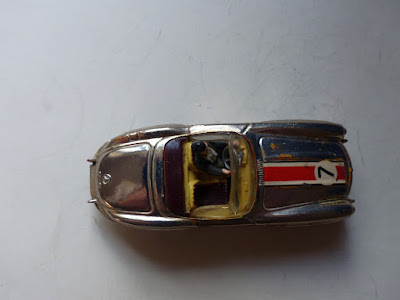 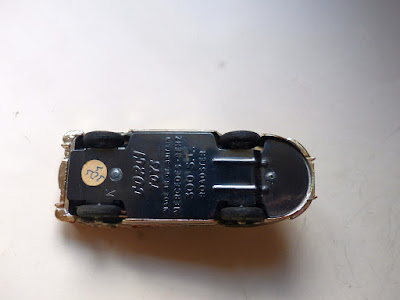 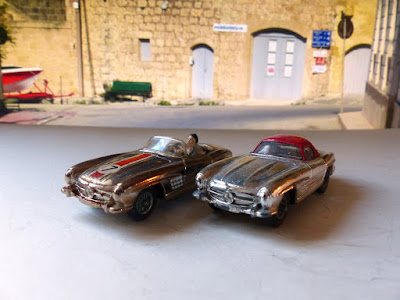 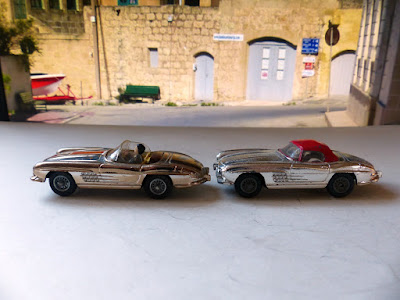 I still have my doubts about the 309 Aston Martin Competition ever being issued with wire wheels. There was a nice normal edition in the box and I am tempted to change its wheels but, as an early type with an open vent on the bonnet, it wouldn't be right. I'll just have to keep looking.

I shall also get a box for the Mercedes if I can find one at a modest price.

It would be the case that early 1959 issues were destined to have short lives. All those issued in January and these, issued in February, were withdrawn in less than two years.

Firstly, the Powers That Be decided that interest in their original launch models could be revived and sales extended a little further if they were given a new 'two-tone' look. Whereas the original issues can be found in a range of colours, these six appeared in just these colours.

You'll see that some of the paint schemes are more accurate than others! 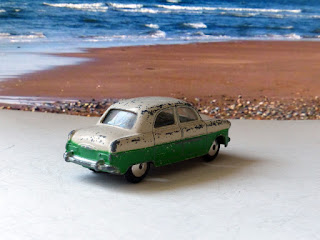 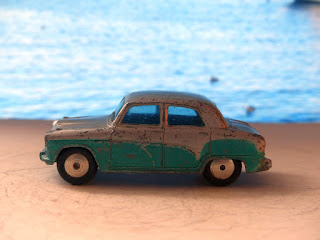 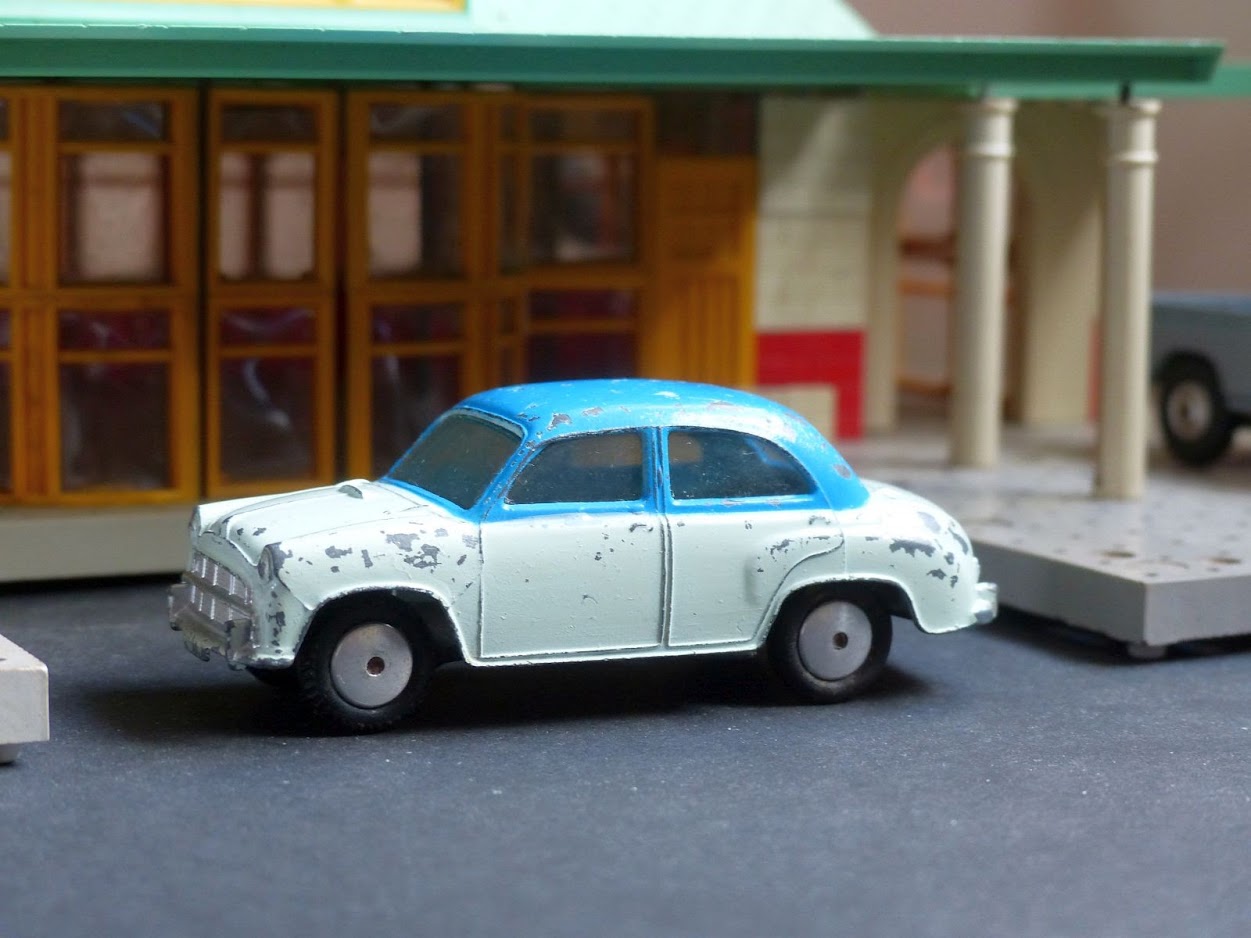 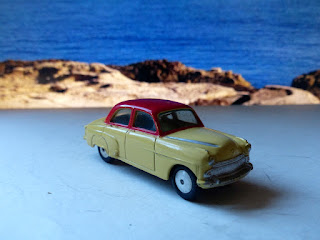 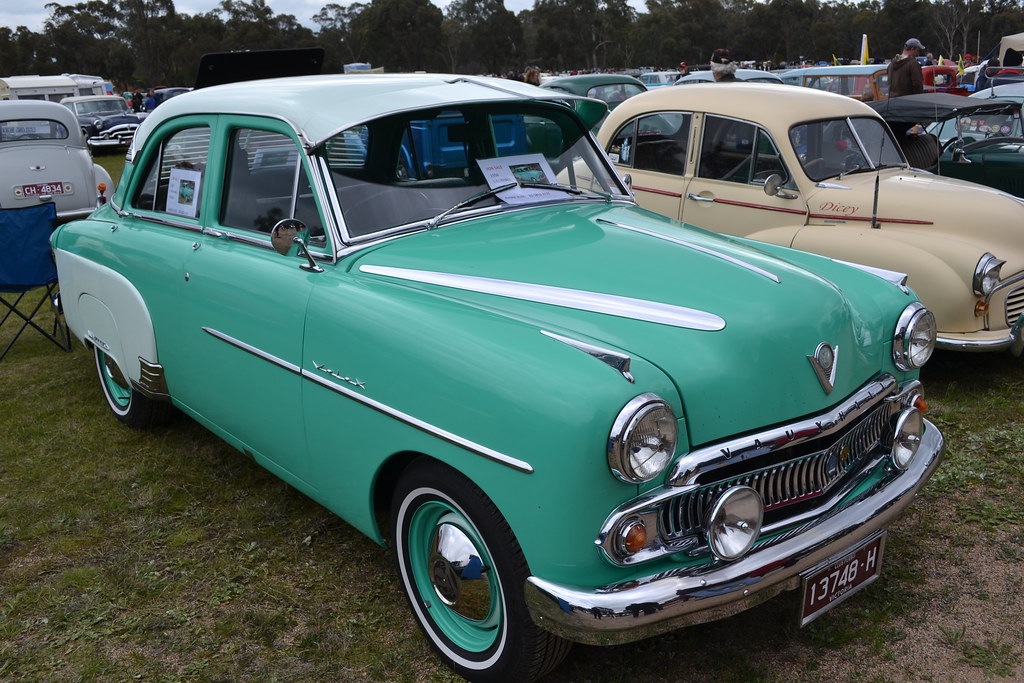 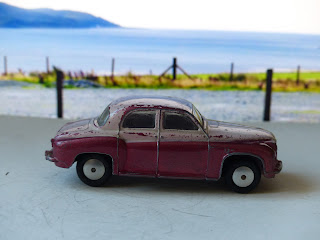 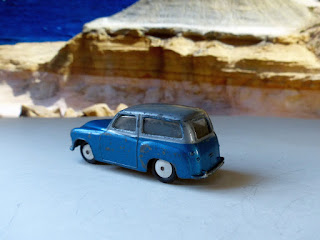 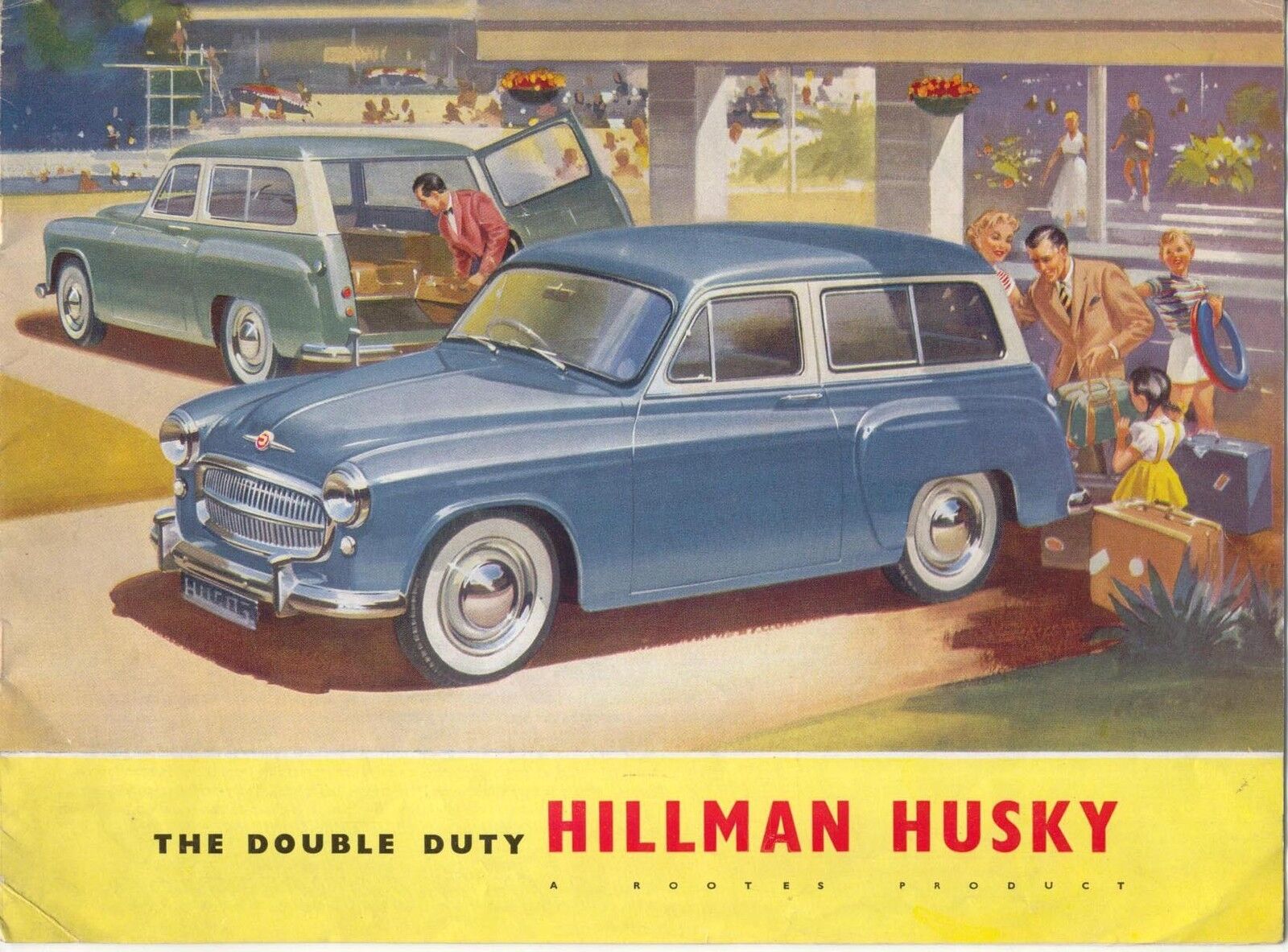 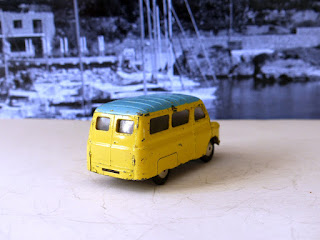 February 1959 also saw changes to the Bedford CA model, the later single screen casting being used now with its revised front end and minor changes elsewhere, as well as a ribbed roof. The first issued model to get this mark II treatment was the 404 Dormobile. It can be found with a 50-50 scheme as well as a blue body and yellow roof. Each of those variations is scarce and good examples usually cost a fortune. 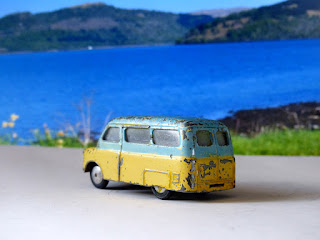 The Riley is conspicuous by its absence and would have been a lovely model in two-tone. I guess that the red 205, which lasted longer than most of these original issues, was selling well enough. The Standard Vanguard III had, of course, already got the two-tone treatment.

The other issue this month is a reappearance of the splendidly detailed and quite impressive Bloodhound missile, mounted on a khaki trolley. Some nice engineering clasps the missile nose and can be used to raise it whilst maintaining its horizontal aspect. Both items were included in Gift Set 4 and will be in Gift Set 6 later in the year, as well as being issued individually some time later. 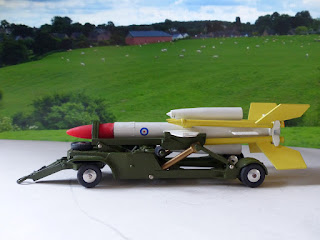 It is an odd combination when towed by the RAF Land Rover, with which it is coupled in each Gift Set. The missile seems always to be white and the detachable side elements yellow. I have seen the rocket ends in red or just silver and the vanes or wings can be white but seems usually to be yellow.