Catch-up with The Corgi Model Club?

I joined the Corgi model Club in its very first incarnation. I got the Ice Cream Van and seem to recall that I never actually paid for it! That 'Club' then ceased and restarted in 2021 with the same Ice Cream Van but in a slightly different box and a smaller certificate. So I have been lucky and get each new issue as they appear. That's helpful as I have many readers now who like to get as early a review as possible of each new issue.

Those who join later will usually start with whichever issue is then the first one, depending on stock. I think that means new starters now kick off with the Mini-Cooper but it may not be long before that becomes the Saint's Volvo.

I recently read on a couple of posts on Facebook Groups for Corgi Collectors pages how several collectors had wanted to 'catch up' with issues and, for the appropriate additional payment, the Club sent them whatever was required. So, for example, someone whose monthly service would have delivered a Land Rover Breakdown truck this week, they could get the Mustang, Ghia and Bentley sent in one go and then their next monthly delivery would be the very latest one, whatever that may be.

This seems an entirely sensible idea and my son (who lives at a separate address), who had joined somewhat later than me, liked the idea of catching up so that we would get the same models at about the same time. He duly called the Model Club but was told in no uncertain terms that this was not possible! I sent him copies of correspondence on the Group pages and suggested he try again, using email this time.

I am hoping that, this time, he succeeds. Another son also wants to start (and is not at the same address either) and I have suggested he asks the same question and hope that he is successful too. It would be so much nicer to compare notes at roughly the same time. I also recall reading something to this effect on the Corgi Model Club's own website although I have not been able to find it again. I may have imagined it but I shall have another look soon.

I cannot see any objection, other than some administrative inconvenience for the Corgi Model Club in supporting this 'catch-up' and it does mean they will have better cash flow with faster movement of more recent models too. I appreciate that there is not much anyone can do about models missed that were issued prior to joining which may now be out of stock. Those will have to be sought - most are available online with sellers who do not want to keep them or dealers who managed to get duplicates somehow and not all are at huge prices. Maybe the young lady who turned down my son's request thought that he wanted to go back in time rather than forward and that would make her refusal make more sense. 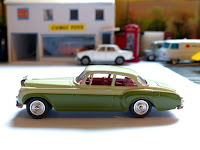 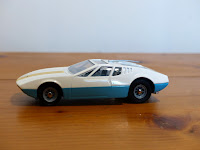 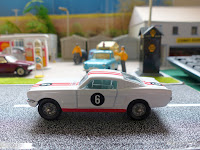 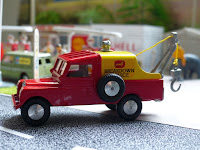 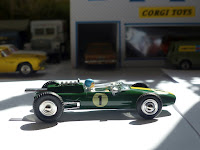 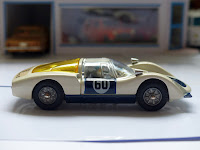 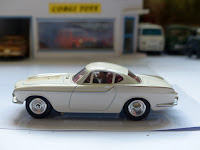 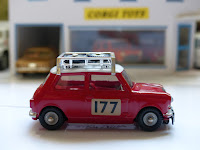 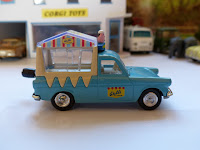 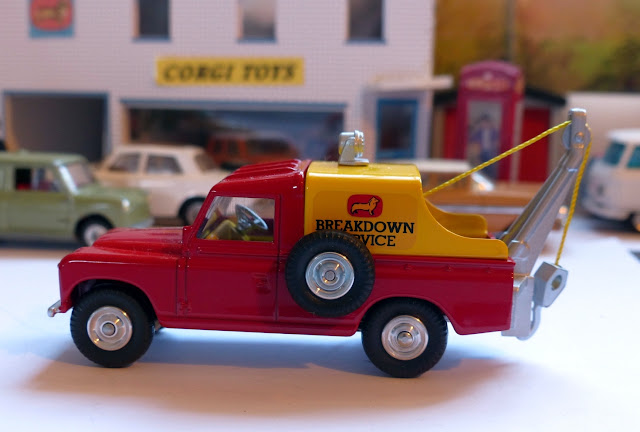 Hornby Hobbies Ltd. are getting in on the retro issues act now and with this release they are getting rather more accurate. The rather strange '261' release of the James Bond Aston Martin with rotating number plates tended to confuse as much as delight. Here, though, we have a good copy in many respects. It is 59 years since this first appeared (with suspension and an interior) in December 1962.

The original shown here has the early type 1 jib whereas the new issue has the later type 2. It does, however, demonstrate how accurate the new issue appears to be. 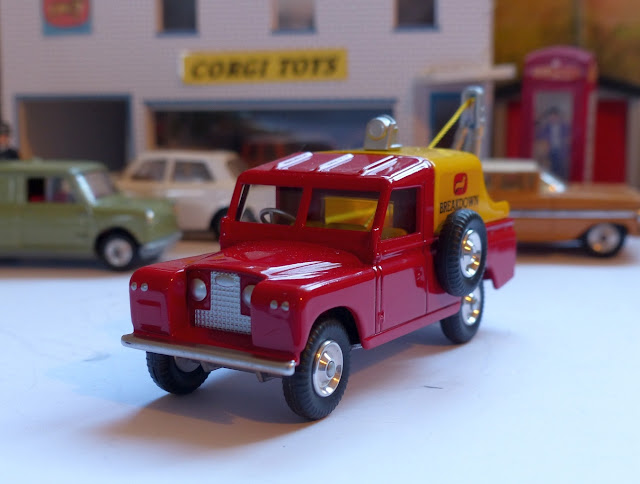 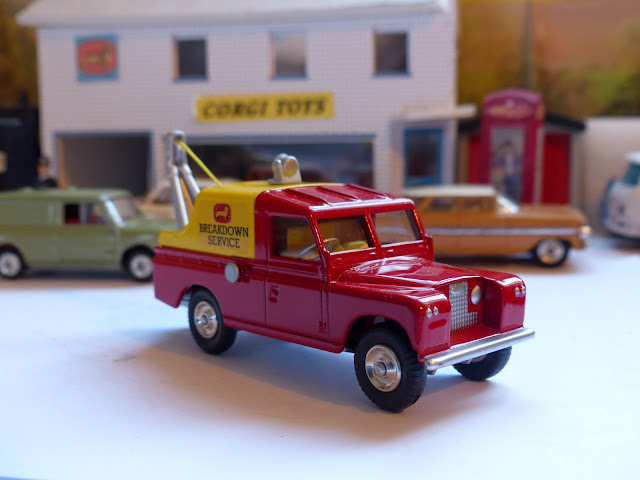 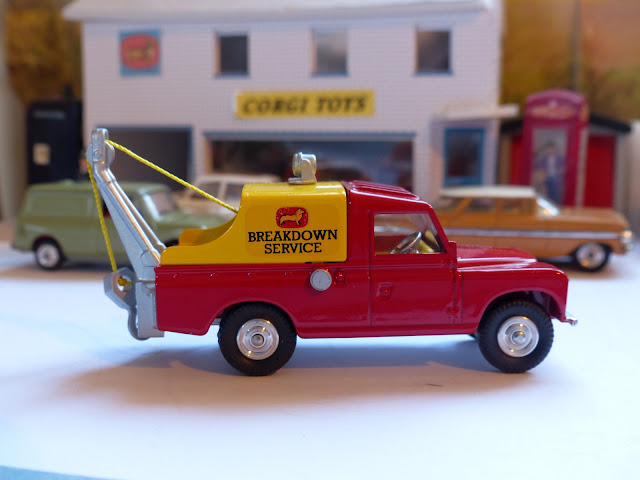 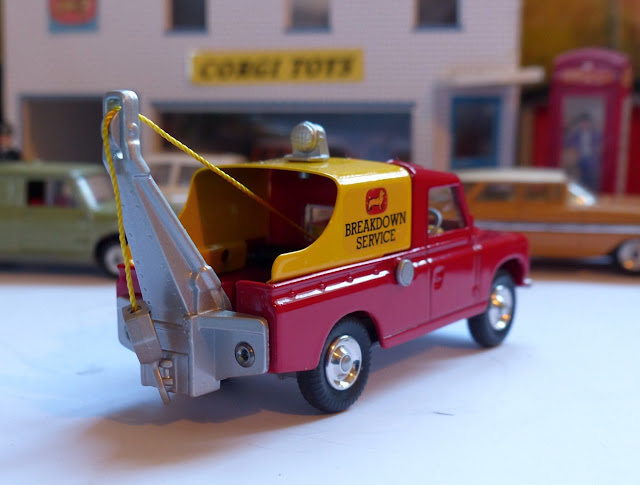 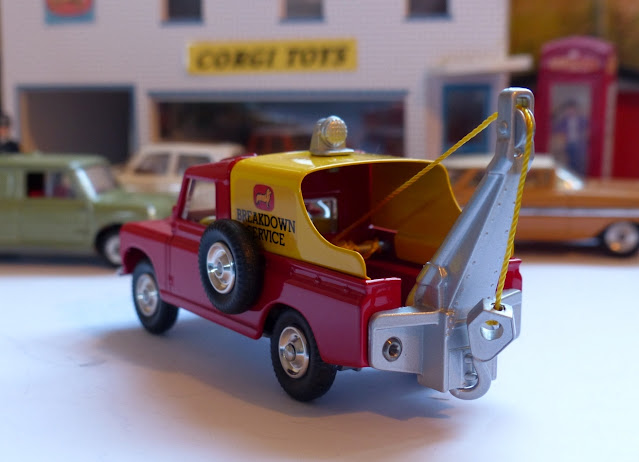 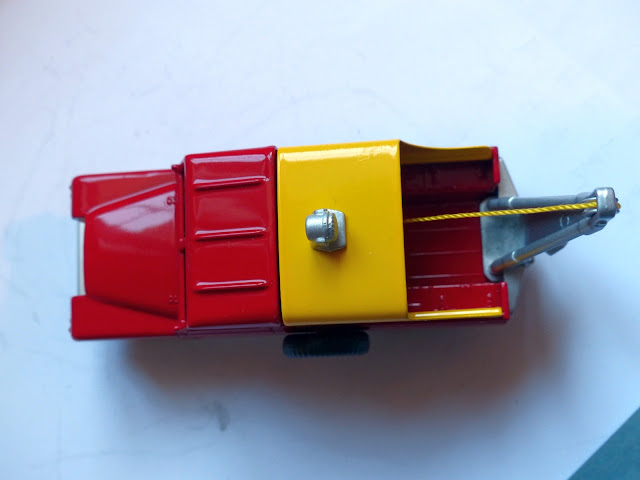 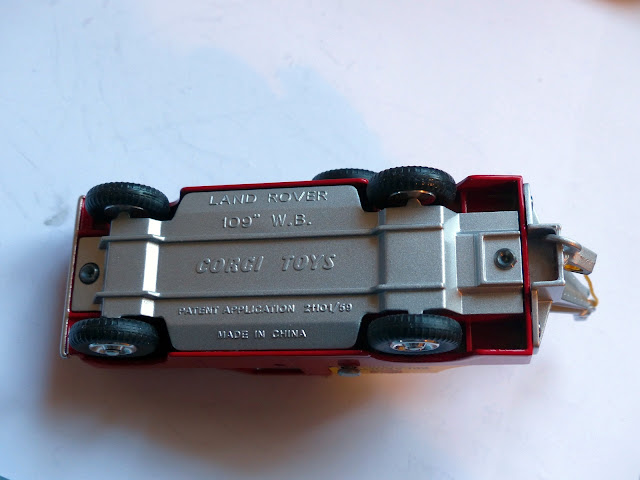 The base, of course, gives the game away and anyone thinking that they might be able to get away with flogging this at a high price, pretending it to be an old original will have to think again. It is distinctly silver too, compared to the usual grey of models issued in the 1960s.
The tin canopy is very good and bears a nice, quite aged-looking transfer for the Breakdown Service text and logo. The search light, however, seems to be fixed and made of plastic whereas the original rotated and was metal. It may be that mine was very stiff and I didn't try too hard to move it but I got the impression that it was fixed.
Apart from the end of the winch gear axle looking different to the original - exactly the same end as appears on the Corgi Model Club's 417 model - it is not easy to see much that does not match nicely the original issue. The hook is a little different, with a different shape but that's about all I can detect on first look. 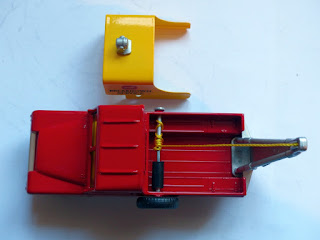 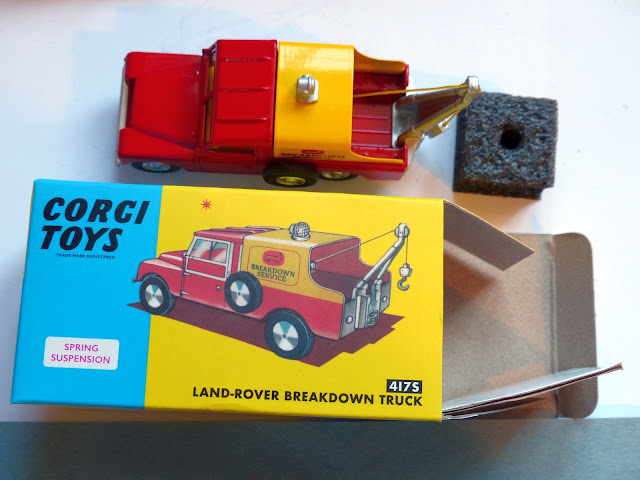 The packaging is very good, better than the Corgi Model Club's efforts so far in that it has a less shiny finish. There is an important piece of thick card that stiffens the whole thing and protects the outer box from the protrusion of the bumper and top of the jib at the rear. A piece of black polystyrene covers the search light. I am sure that this is the same block as the Corgi Model Club provide for the 417! 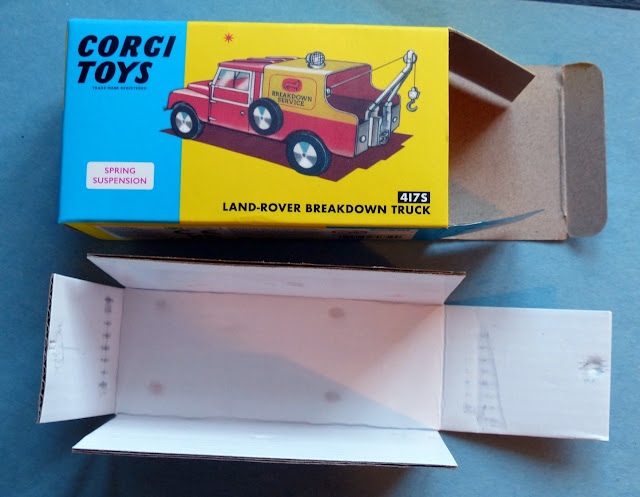 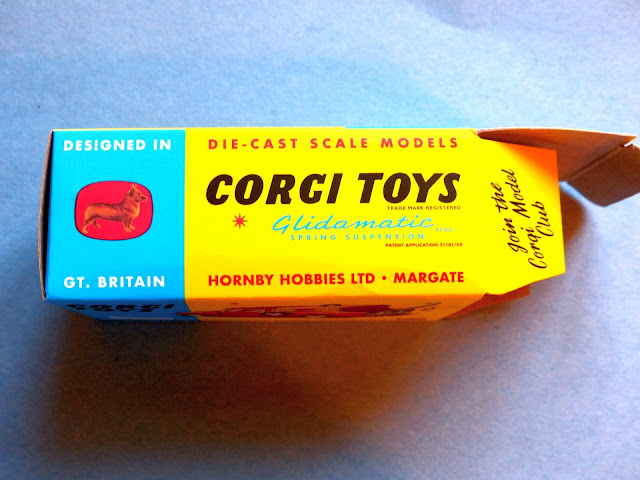 I had to smile at 'Join the Corgi Model Club' promotion on the flap!! 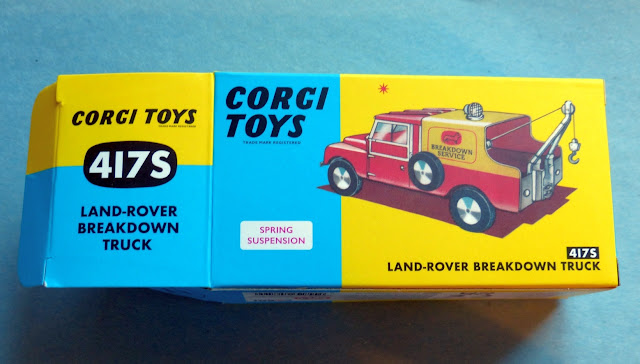 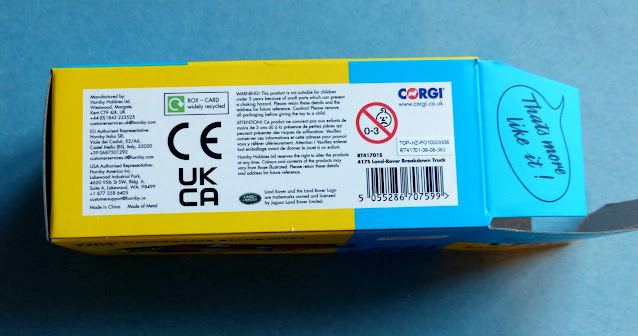 The 'bottom' panel has the usual text and 'Made in China' in pleasantly small text.
There have been several people worrying about how fraudulent traders may try to sell these off as originals but both the base and the box really should be enough to make it abundantly clear that this is not an original. I see no problem whatsoever and very much like the idea that collectors can buy a lovely model like this for a modest price. The Hornby / Corgi issue is also available for anyone to order and in a large a quantity as they please.
Posted by Andrew Hill at 12:56 No comments: