The Toyota 2000GT and how it might have been 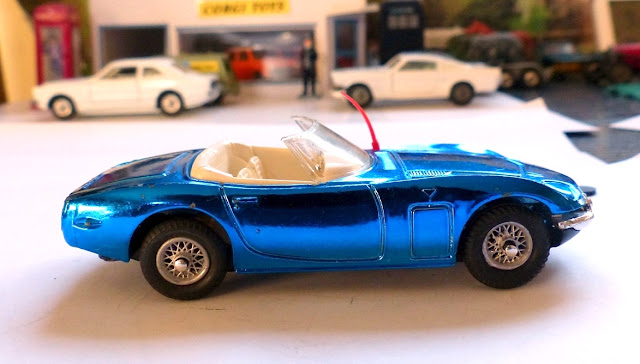 This is not a model issued by Corgi but I wish it had been. It's a 375 Toyota 2000GT which was issued with annoying 'pepper-pot' Whizzwheels in May 1970. The earlier 336 Bond-related issue had wire wheels and looked great so I thought I would see what this edition would look like with the same wire wheels.
This really is gorgeous. That paint finish is also quite exceptional. You can find it in a shiny purple too but that's scarcer and a lot more expensive.
It is not necessary to ruin the car either. Whizzwheels are easy to remove - just pull them off - and fit the wire wheels, although you will need to insert a sort of wheel bearing device to reduce the diameter of the hole to match the thinner axle.
Posted by Andrew Hill at 19:19 No comments: 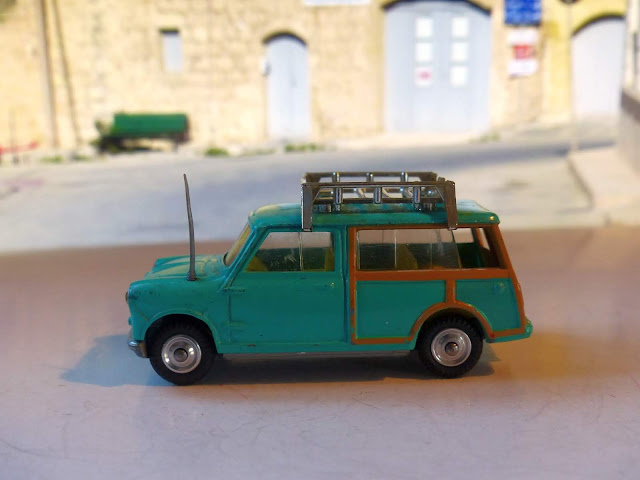 The original and most common model has shaped wheels and a fuel filler cap on the nearside rear wing. 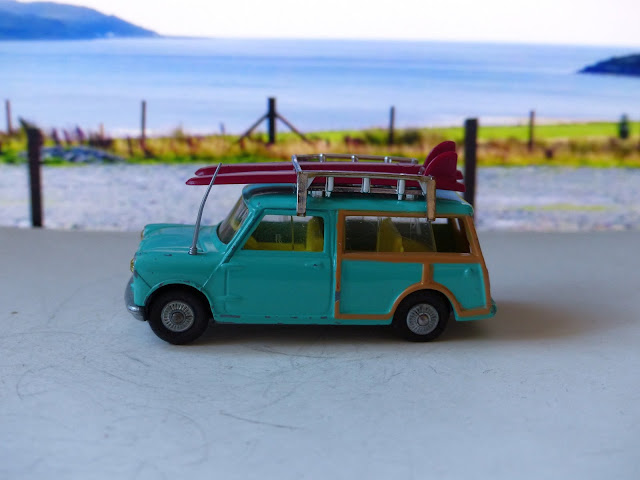 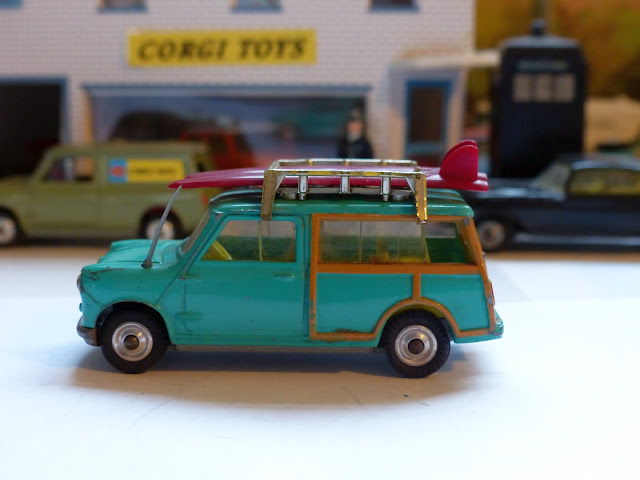 Now I discover a third model - without any sign of a filler cap! I have only seen this so far on models with shaped wheels and my inclination is that this is an early casting - not at all common and which was later revised. The fuel filler on the Minivans and Police editions are on the driver's side and inset so quite different.
Posted by Andrew Hill at 17:42 No comments: 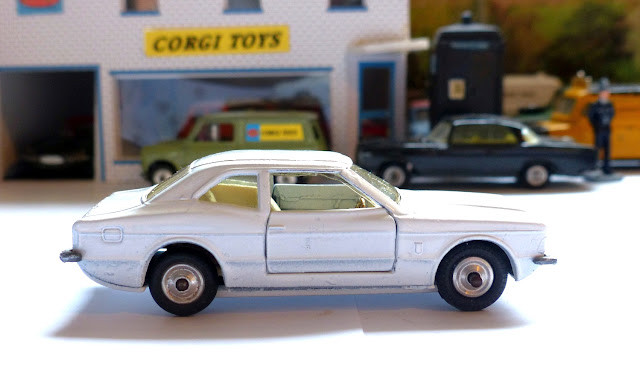 The Ford Cortina MkIII GXL was issued in 1971 with a Graham Hill character holding a football. It came in metallic blue, metallic bronze and a solid mustard colour, the latter being available, remarkably, with both right and left hand drive interiors. The mustard ones are really quite rare and seem to have been exported and not sold in the local toy shop.

One of the blue ones came effectively free with some other models a while ago and was in a very sorry state so I decided to see what it would look like with normal wheels. For me, this is a great improvement!

I need to redo this one day as it needs another coat of paint and even the original didn't have door inserts so they look a bit bare. It did have twin jewelled headlamps and opening doors with tilting seats and is an accurate model of a popular car in those times. The released issue had a black 'vinyl' roof which I may need to add too. More in a while on this project. 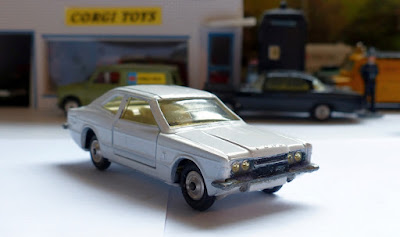 Another Whizzwheels model - one that did not need much outward attention - was this lovely Toyota 2000GT, a car that, strangely was not something you could buy from the Toyota store. This was Corgi making good use of the casting for the 336 James Bond model with Aki at the wheel. This car is crying out for the wire wheels to be refitted! So I'll see what I can do as this is a spare with virtually non-existent suspension. 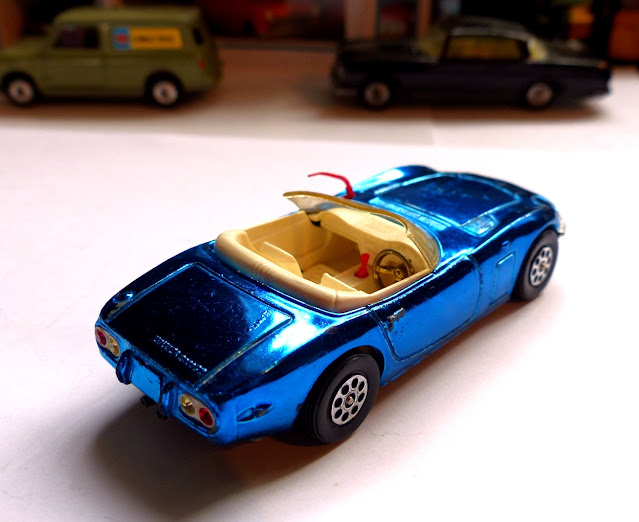 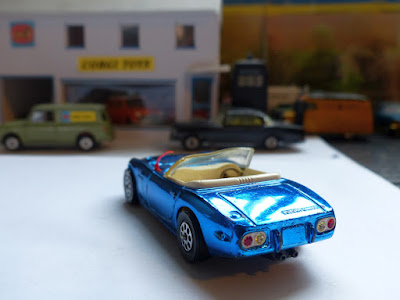 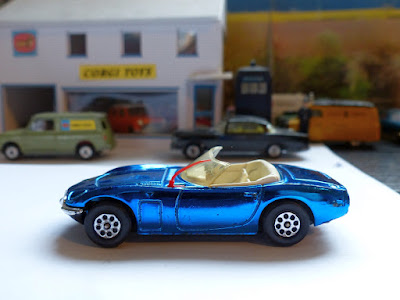 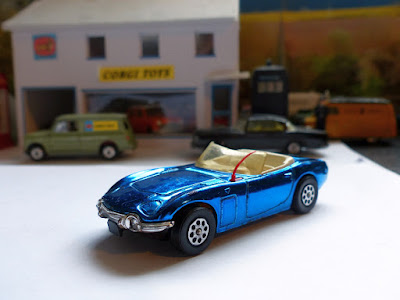 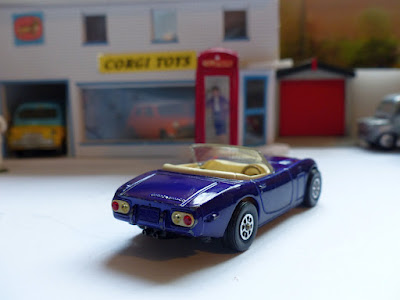 And, on the subject of making Whizzwheel models look better, here's another look at the much-improved Bentley I created last year. 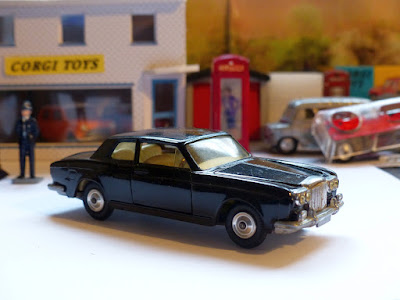 I have recently acquired two quite scarce editions of the 270 model Aston Martin and it seemed a good time to revisit the main differences but I've also found another. 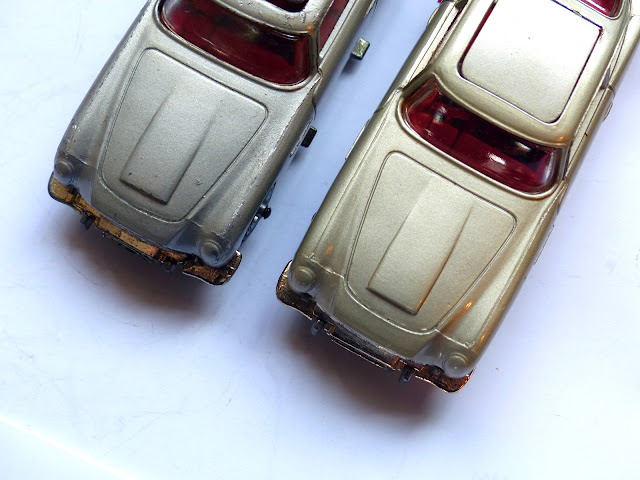 I have written before about the different James Bond Aston Martin 270 models. To recap, there are 5 main editions:
Here is a timeline which includes wheels types and box types:

I must accredit this data to the man who produced something similar on www.corgi.free.fr/Pages/chronoscope.htm and which I have revised slightly.
Boxes are few and far between these days but do beware of people putting the scarce first type in the very much more common third type blue box with a stripe. Any surviving bubble-type packs are worth a fortune now.
The wheels I did not illustrate before so here are comparisons of the early Type A, which almost appears 'filled in', and Type A which is a much cleaner wire wheel. 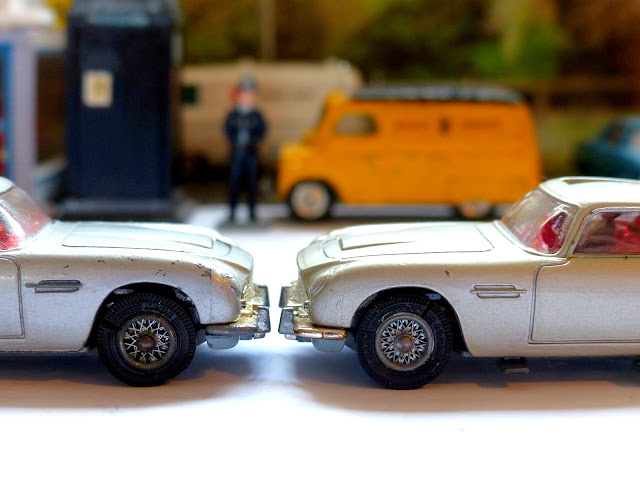 I can also illustrate the different base shapes now too. The oval and round sections near the exhaust are quite easy to see. 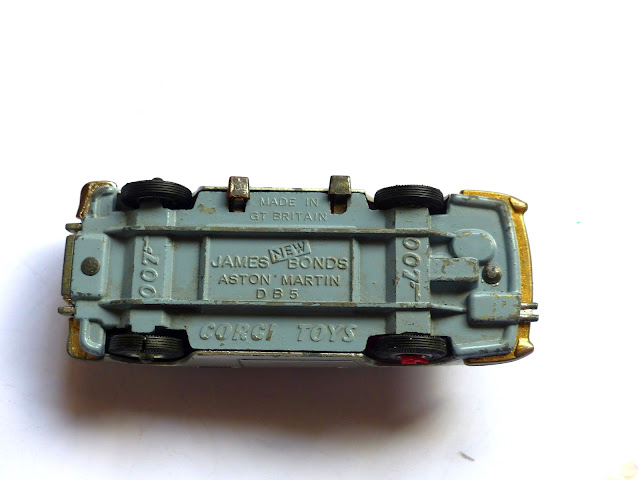 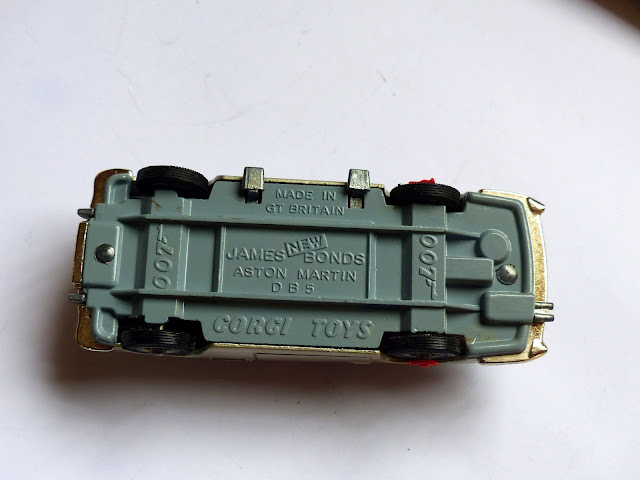 What I have not listed separately - because I have only just noticed it - is the very distinct difference between the paintwork on the two models I have just acquired. The early Type 1 model with silver bumpers has a very smooth 'champagne silver' colour and the later model, a Type 3, has quite different and slightly more metallic-looking paintwork.
Perhaps all the early models were produced in the champagne silver shade with the more metallic silver coming later. I need more information on this if anyone can help. Both the comparatively scarce models that I have shown here are totally original. It is entirely reasonable to see a change of shade or type of paint over 8 years, of course. It would just be nice to know when the change may have occurred and to what extent models of particular types may be available in them.
I shall then add an extra row to the timeline illustration.
Posted by Andrew Hill at 16:47 No comments: 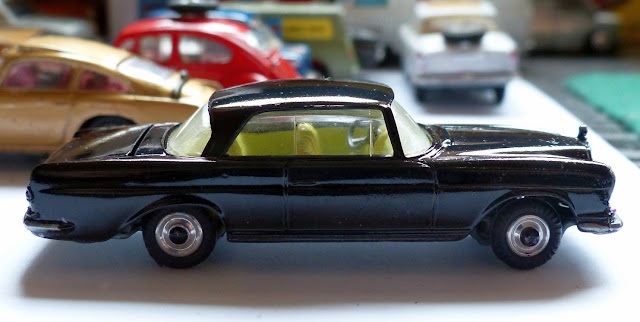 One of my all-time favourites hit the toy shop shelves in February 1962. The Mercedes-Benz 220SE was available in three colours, all solid. Black and red with yellow interiors, cream with a red interior. It had the wonderful steering that we had first seen on the Bentley Continental. Small-size wheels diminished the model's appearance slightly and it was a bit too close to the ground for really effective control on a carpet but worked fine on a harder surface. 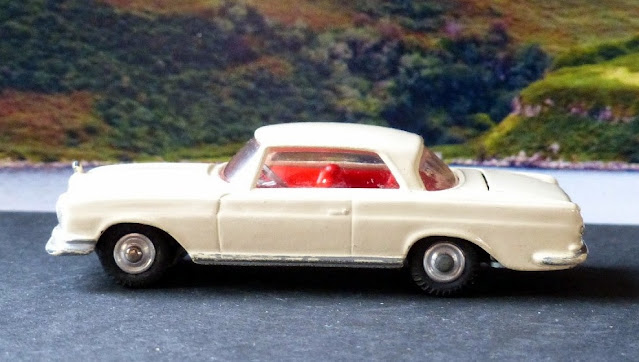 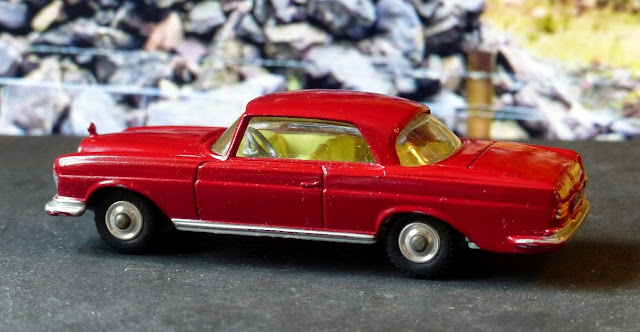 The boot also opened and contained a spare wheel housed in a dip on the right hand side. There wasn't a great deal one could do with the spare wheel but I always liked opening boots where odd bits and pieces could be placed and driven around the room. 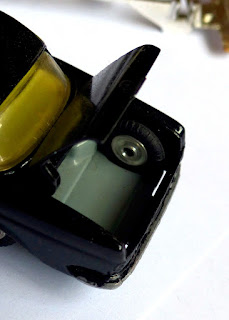 There are two types of window unit, one with an indication of a pillar and quarterlight and one without. Many models have since lost the emblem on the bonnet now. This is a typical example of where the Great Book of Corgi gets things wrong, as it states that this model was available in metallic red and dark blue as well as cream and black. I spent ages looking for those two editions before realising that the metallic red and dark blue were the colours for the later 253 edition!
The later edition loses the steering and gets a reshaped boot panel. To make up for the loss of steering, Corgi will add a suitcase but, contrary to may dealers' listings, the 230 model did not have a case when sold. More about that in September 2024!
The other new arrival at the shop would be the Thames 'Airborne' Camper Van. 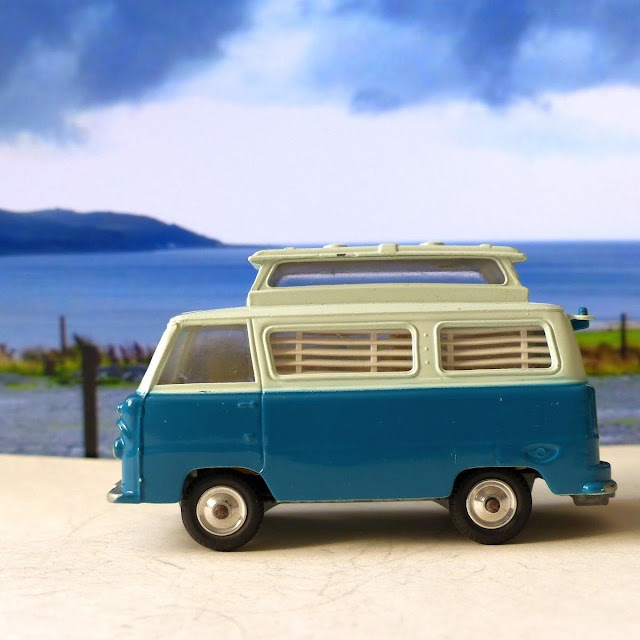 This was a fun model with opening rear doors and a very detailed interior. It came in three exterior finishes, all two-tone: creamy-white over a rich blue, pale olive over olive-green and pale lilac over lilac. Whilst colours for the olive green version were fairly stable, you'll find quite a few shades for the blues and lilacs. Furthermore, whilst the olive green had only a brown interior, off-white, yellow and red interiors can be also found in the other two with a red table in the off-white or yellow interior and a white table in the red.
The Thames Camper Van would be the last model issued with fixed shaped wheels. Fixed wheels seem scarcer, particularly on the olive-green issue.
Models have blinds in three of the four side windows but this doesn't appear to be consistent as to which window is left open, with both smaller panes on each side with or without a blind. 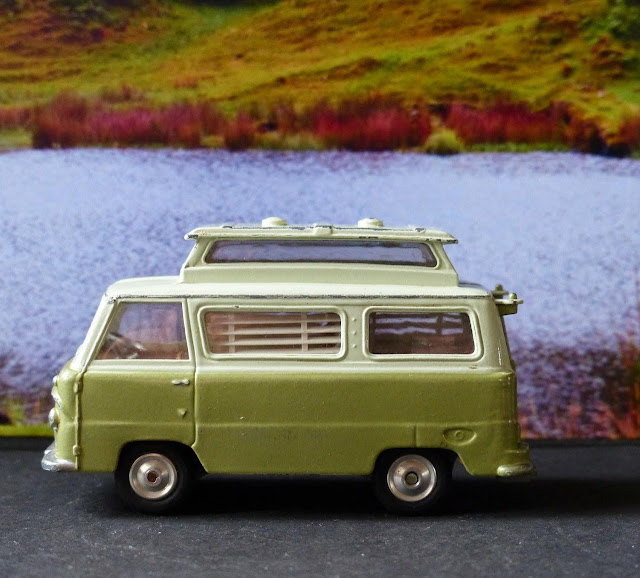 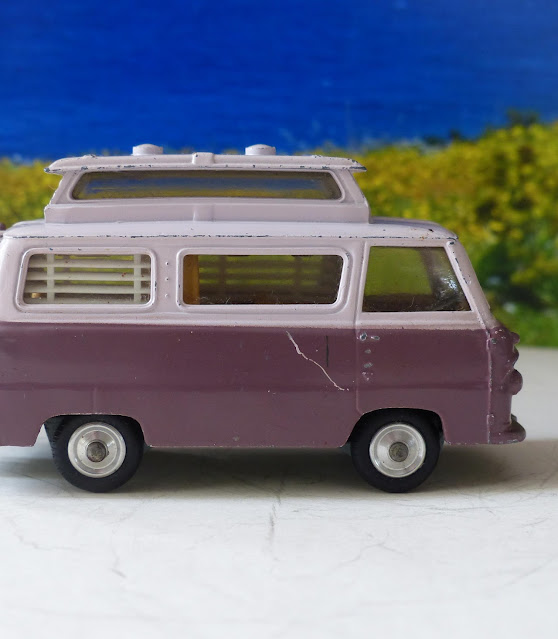 So just two models but a remarkable number of editions if you are trying to collect each one!
Posted by Andrew Hill at 03:00 No comments: