Less than a year after they issue the Commer lorry with a platform rear along comes an ERF version. 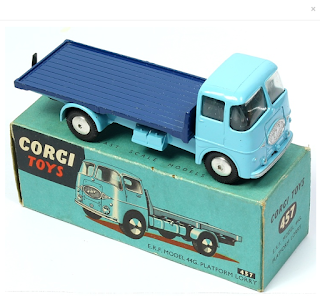 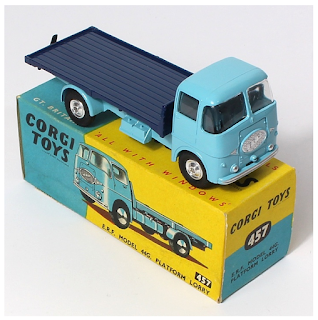 This lasted well into the mid-1960s but I am only aware of the light blue cab and dark blue platform colour scheme for this model. There were at least two schemes for the Commer but just the one for the ERF over those 7 or 8 years.

There will be a change to shaped wheels roughly half-way through production and both types are common. I have not had a chance to study these in depth, however, and believe that there will be several small differences in the casting to look out for which I shall have to document another day.

The second March lorry was described as a 'van' but I have to say I would have called it a lorry had I seen one at the time. Similar to the Commer Wall's Refrigerator 'Van' from 1956, this is a cab, chassis and large box affair with rear door lines in the casting. 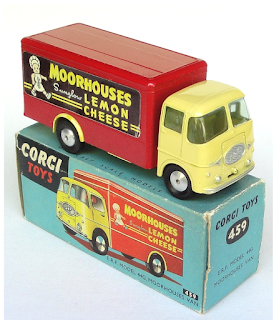 Again, I am still looking for a good one of these for my own catalogue and have not looked at any models closely. I believe that they are all the same colours but suspect there may be some casting differences. Perhaps not so many in this one as it was withdrawn from production in 1960 after just a year or so. I should imagine, therefore, that all these will have smooth wheels.

The advertising is by paper stickers which tend to wear although I have been impressed at how wel the colours have survived over 60 years on most that I see. If they have passed the point of no return, as it were, then some replacements do seem a good match, although they will look odd on a slightly worn model.