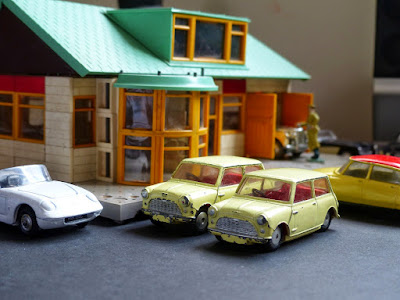 I will have to stop writing about minis. Another yellow Austin Seven came along last week and it is in better condition, paint-wise, than the first. However, very unusually for a mini, the suspension is non-existent. I don't think I've ever encountered a mini without decent suspension before and, of all models, it has to be this potentially expensive one! 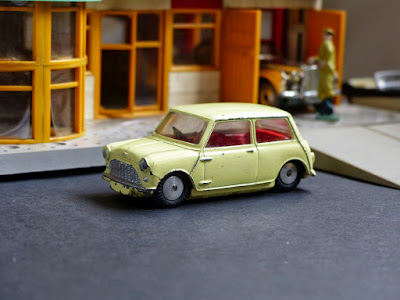 It sits pretty well on the road and, at least, it is even! I would guess that the wires have either come out of the holders at each end or become permanently bent up, leaving the axles loose. That may be something I can fix without taking it apart but it's for sale if anyone else wants to have a go! Once that's done, it would be on par with the £300+ examples I've seen at auction. This is one of those models that really needs a box so if I still have it when one appears at a reasonable price I'll pick up an original one. 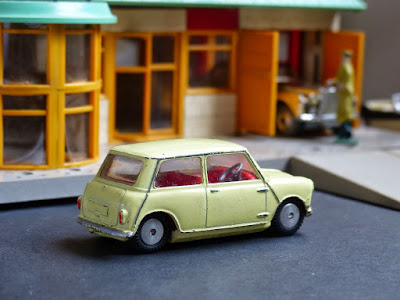 An amusing postcript to this is that my children and I play a game as we travel around, scoring points for spotting minis on the road. There's a bonus for a yellow one but, as old ones are worth ten times more, an old yellow one would be around 20 points. So it looks like I'm winning, guys...

One in the back and one in the front 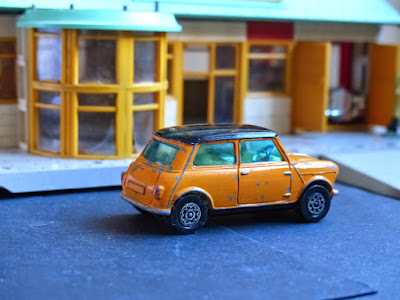 Never mind How do you get to Wales in a Mini? I am beginning to wonder just how many different versions of this Mini Corgi made in Wales in the early 1970s. Bearing in mind that their 1970 catalogue features the very popular 334 with opening everything and looking pretty spectacular as a model, as well as the redoubtable 226, still going albeit in metallic deep purple, bearing all that in mind you do wonder why they needed 204 which did nothing and looked pretty bad with Whizzwheels.

Someone had decreed, though, that Whizzwheels were the future of everything and so 204 would be The Corgi Mini in 1972. Except it wasn't and no-one bought any when the other two were still on most shop shelves. You can hear the little shop keeper now. 'Ere sonny, you don't want that one. Look, I've got these lovely metallic green or blue Mini Mannificks. Or you can 'ave a nice purple one but don't 'ee be blowing too hard on it or the paint will come off.'

So in 1973 they effectively disappeared again, most emerging in old stock sales over the years between now and then. The funny thing is, though, just how many different versions there are for such a short period of production. There are five main colours: orange, orange with a black roof, blue, blue with a black roof and metallic blue. As if that's not enough, you'll find tinted windows (and I'm guessing that they were spread pretty much across all the colours) and the orange one(s) came with yellow or red seats. I think that makes a dozen models you''ll need to find for your collection to be vaguely complete.

I say 'vaguely' because there are also silver or black bases but I am taking the view that they came with one or other of the variations mentioned already. There are, however, what look like different castings even amongst this short run. The all orange one looks to have a much less well defined badge and at the rear a smaller gap between roof and window and slightly different window frame detailing. The more I look at them , though, the less certain I am about a different casting and that may just be thicker paint and some optical illusions caused by the tinted windows and black roof.

This particular example of the orange one with black roof and tinted windows has seen better days but is still quite unusual. These may be little loved and rather messy Corgis but they're well worth some close examination and even tatty ones can be of good value. 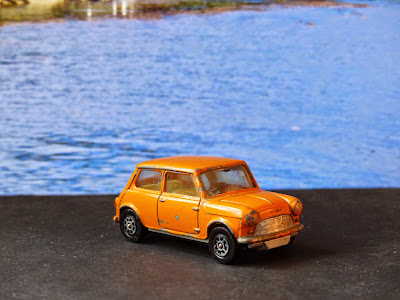 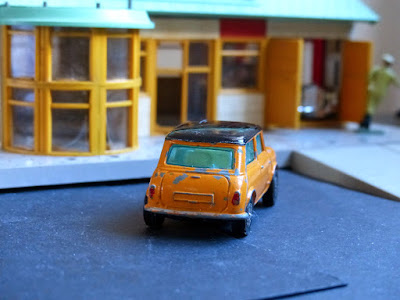 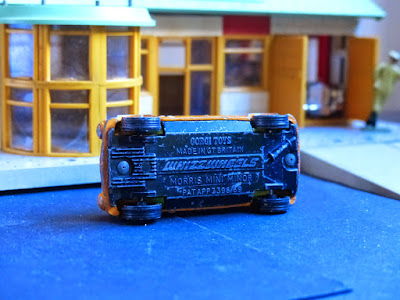 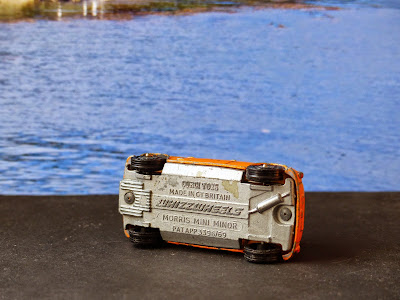 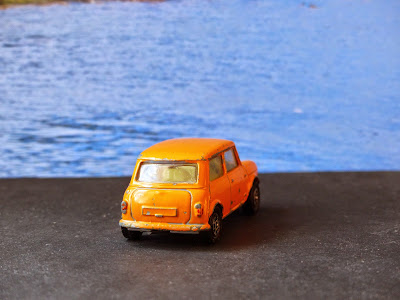 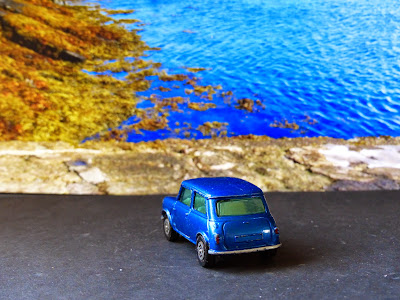 Blue and rather rare again 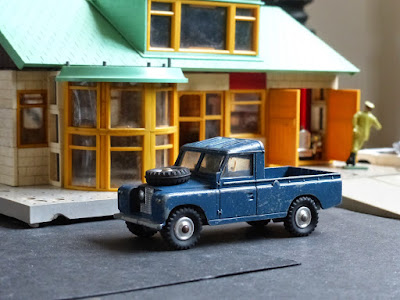 What is it about blue and Corgi Toys? This has come along and you're probably already saying That's the wrong shade of blue and you'd be quite correct. It is neither the super rare RAF blue nor the RAC blue that were around at the time. However, look underneath and you'll see that the original colour was, indeed, RAF blue and so this I firmly believe is a genuine #351S that in good condition and a nice box would be worth four figures.

Unfortunately, it looks as though this had an accident that may have scratched the paintwork and smashed the rear screen and some kid has at some stage made a pretty reasonable job with some stripper and the old Humbrol. The base has not been removed. The tyres aren't original but they look pretty good so I'm not worried about them. I may add the RAF roundel but, even in this state, it is such a scarce item that I wouldn't risk messing up the paint further by attempting the remove one blue and put on another, tempting though that is!

It seems impossible to know what to price this at so I've just left it on the site inviting 'offers'. And if no-one wants to fill that hole in their collection I'm quite happy to keep it with the other 55 Land Rovers I seem to have accumulated! Oh dear, did I say 55? Heavens. 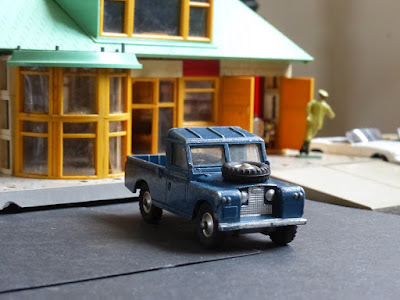 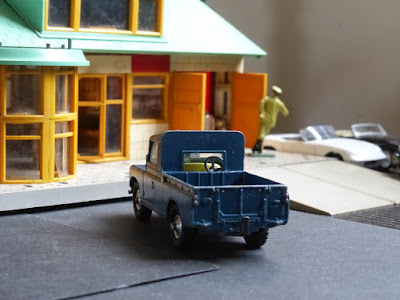 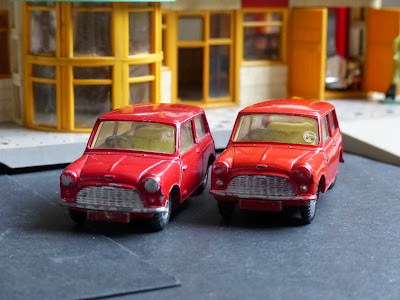 Another Mini arrived this morning - an Austin Seven with flat hubs and in really nice, clean condition. What immediately struck me, though, was its colour. It has a distinctively tomato flavoured shade compared to the one I have had since my childhood.

It is also made from a different casting, being similar to the yellow Mini that came a little while ago, having rectangular holes in the base showing the axles. 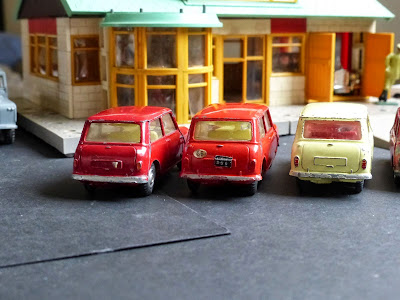 I dug out the other two red Austins that I have and, remarkably, they all have different castings! There is the tomato one with the holes, my original collection item with no holes but two rectangular flat areas near the front and another deeper red type with free spinning wheels, no holes or rectangular areas but which has a small circular extrusion midway between the front wheels. That one also has a different shape cut out for the four wheels and the text, set out differently reads Patent No. as opposed to Patent Application. 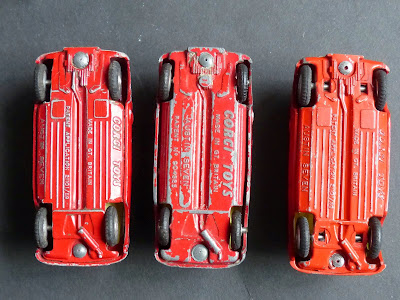 My guess is that the tatty old one with the Patent No. text is the later of the three, especially with the free spinning wheels that it has. (That one also has two steering wheels - one floating around inside! I have no idea how that could have got in other than at the factory as the base has not been removed and the plastic interior looks intact. The rear window is a bit odd but I don't think it could have been opened in any way. Bit of a mystery, that one! In more ways than one.

Another yellow Austin is on its way from France where no-one seems to realise they're particularly scarce. It looks in fine condition and a lot better than the one I got a few weeks ago. I have also acquired a very pretty little Morris Minor in pale blue with a yellow interior. I had to look at the pictures for several minutes before realising that there was something different about this one! 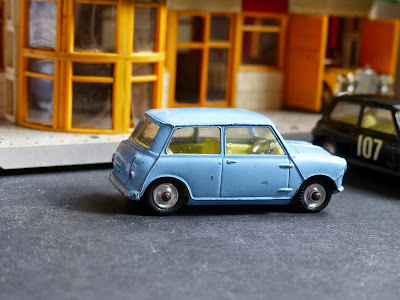 I shall write separately about the yellow one when it arrives. I am assuming it will be the same casting as the one I have.