January 1958 brought two things you could tow behind your Land Rover or Commer lorry; 101, the Platform Trailer and 102, the Pony Trailer. The Platform Trailer can be found in many combinations of chassis and load section colours but I think there would only have been these three available initially. 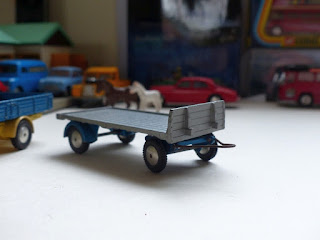 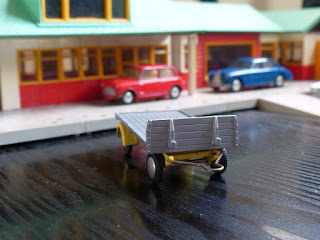 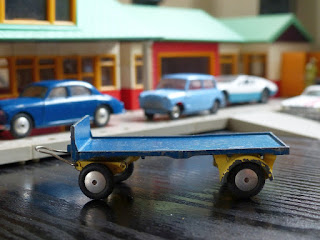 These would have had the simple wire drawbar. It would not be until 1962 that that got replaced in a boxed edition, although in March 1960 the records show that a set comprising an ERF lorry with cement and plank loads had a cast drawbar. I am not so sure that is correct, though. You will also see a blue and red trailer carrying a Chipperfields Circus elephant cage and a blue and cream trailer carrying milk churns but both these will have cast drawbars. There is, of course, also the yellow trailer from the Farming Set but that also only appeared later and had a fixed cast drawbar.

The Pony Trailer I have written about on several occasions. What seemed a very straightforward issue - just the choice of three colours, I had thought, turned out to be a lot more complicated! However, here in January 1958 you would have opened the box to find just one of two possible editions: a cream horsebox on a red chassis or a red horsebox on a black chassis. Either would have a wire drawbar, exactly the same as was fitted to the trailers. 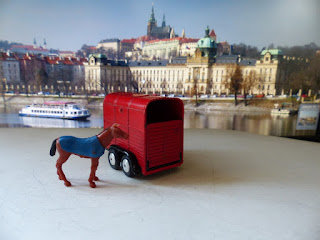 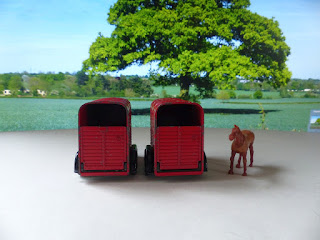 In the box would be a brown pony with a blanket on. The blanket would usually be blue. I have seen other colours but believe that the early ones were always blue. If you had one of the very early editions then you would have struggled a bit to get the pony out because there was no 'handle' or protrusion at the top of the ramp to help you in lifting it to unlatch and then drop it down. Pretty soon after the first issue, however, the casting of the ramp was changed and a 'handle' added.

Both the cream and red and red and black editions can be found with and without handles. The red and black one carried on rather longer than the cream and red and even got a fixed drawbar at some late stage. There is no documentation on this but my guess is that it would have appeared a little before the time when the brown and cream Pony Trailer appeared for the revised Gift Set 2. That would correspond with the 1962 debut of the same thing on the Platform Trailers.