I have a second BRM available. For a change, the wheels are not as blackened as many of these become (and I haven't yet found a good way to revive them as they were a fairly miserable grey in the first place) but you'll see that one has been fitted the wrong way round! 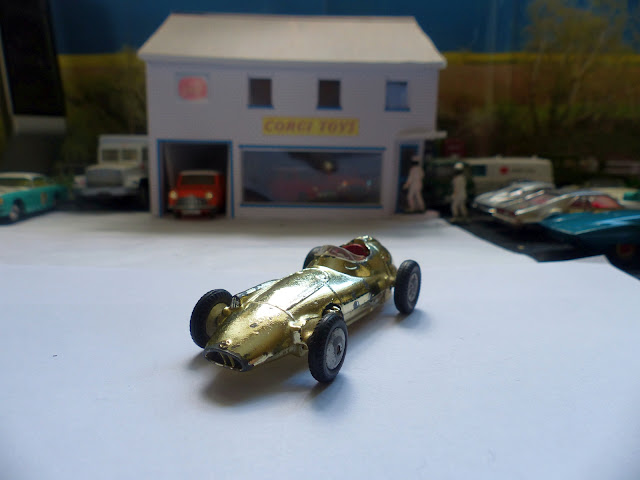 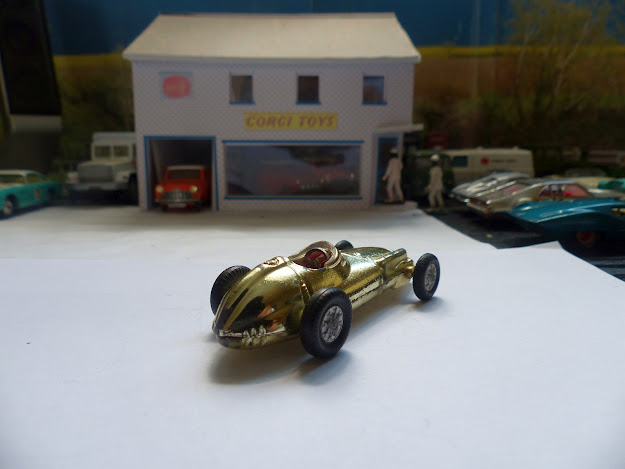 On a model like this I don't think the error adds to its value (as it would for a normal Corgi edition). The gold plating is pretty good, some flakes on the rear and side only and it doesn't suffer from the rough corrosion I have seen on some.
These models are not easy to find these days and I have yet to find one on its plinth, never mind with a box! From what I can gather, these didn't sell particularly well at Marks & Spencer and not a great many were produced anyway. Here are all five, although I do need a better Austin Healey or, at the very least a less ridiculous-looking screen!
Update 17 September: I have re-loaded the images on this page as I am aware of some issues with those published previously. If you do experience any problems with any images in my articles on this blog please let me know. 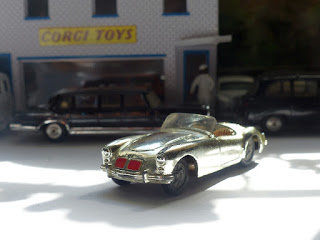 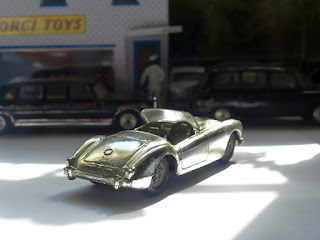 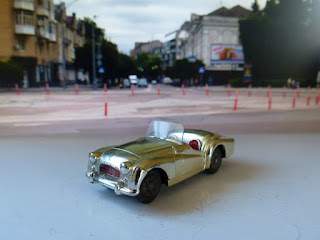 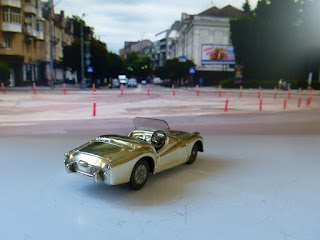 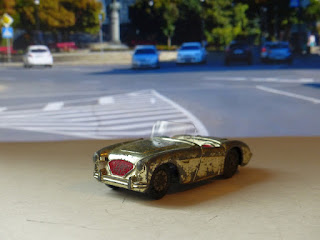 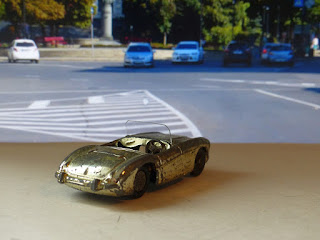 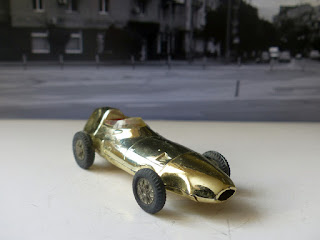 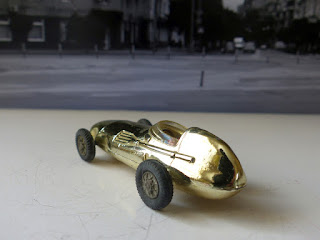 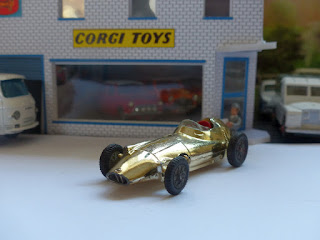 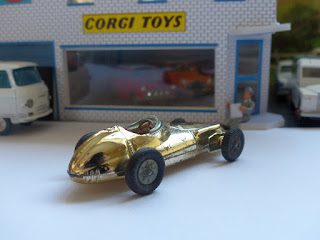 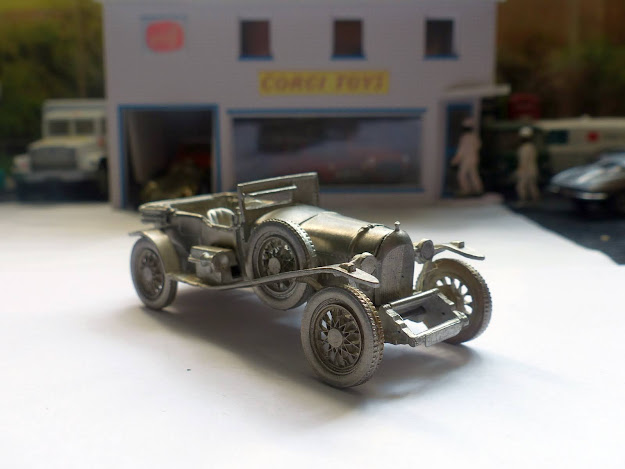 This Pewter Edition Bentley 1927 3 Litre arrived in a bundle of Corgi Classic models a few days ago. I was surprised to find that it appears to be an exact copy of the 1965 Corgi model in virtually every respect. 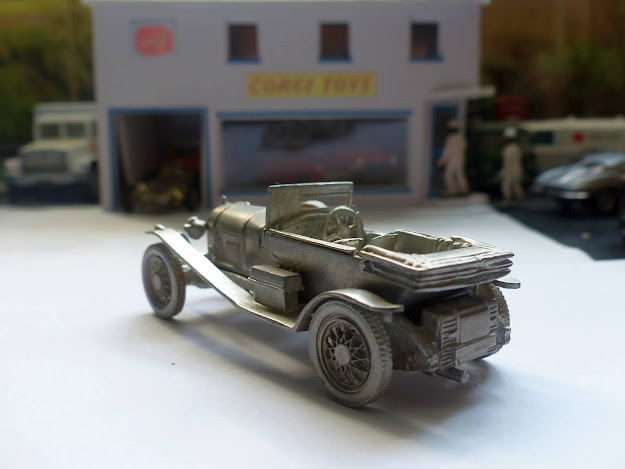 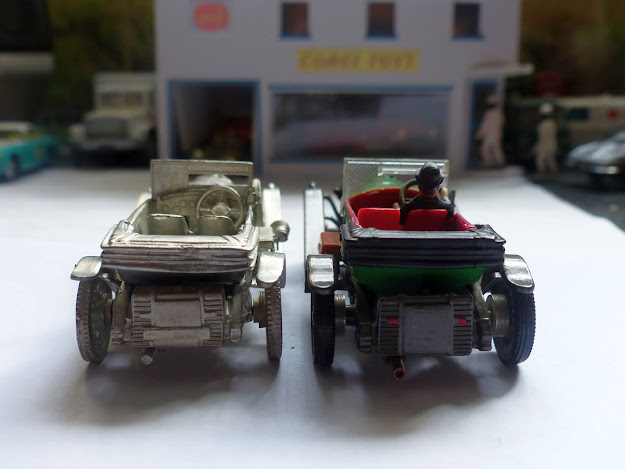 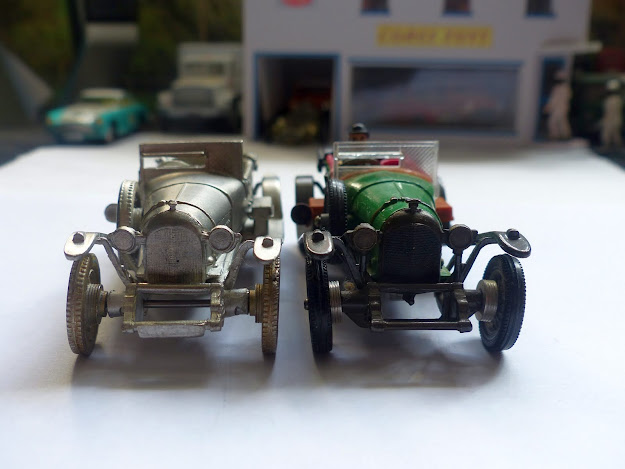 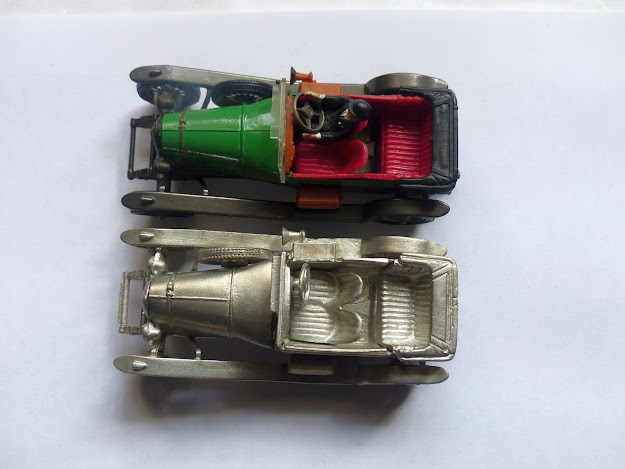 Even the seats and windscreen are produced in pewter metal. I might have preferred the windscreen left as a piece of perspex but at least this one is less likely to break! The wheels turn too and, again, might have been better left as the nice wire variety with rubber tyres of the original models. It is, though, obviously not something to be played with but an item to be displayed in a cabinet.
I cannot find a great deal about this online. Some information appears to identify it as a Corgi premier Collection model that was produced for mail order in 1989. Another source suggests that it had a limited production run of 800, using the casting tools for the 1985 C861 editions.
This could be the highlight of someone's Corgi Bentley 1927 3 Litre collection but I have no idea what price to ask. I simply have never seen anything like this before. Were there other Premier Collection models? How were they packed? Information gratefully received from anyone who recognises this. Looking at the lack of response that similar requests have had over the years on the few places Google found for me, however, I am not expecting a flood of replies!
Posted by Andrew Hill at 12:33 3 comments: 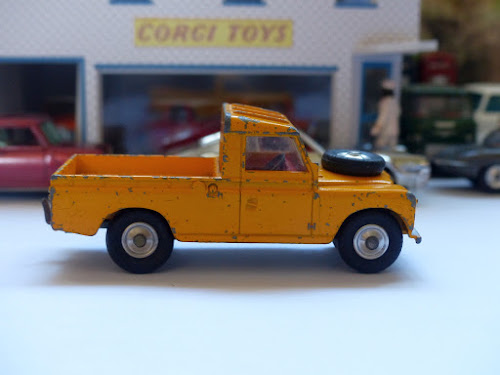 When the Land Rover was updated in 1962 it was issued as 406S and came in this very bright yellow finish. For reasons I have not being able to establish it didn't last for more than a few months before being replaced by a deep green version with the 438 model number. Maybe it was because this was a completely new model as a Series II Land Rover whereas the S suffix tended to indicate merely the addition of suspension and an interior to an existing model.
Whatever the case, these are rare and almost all that I find have a lot of chips, broken windows or missing middle strut on the window. Seldom is the hook still there or the front bumper even approximately straight. So when this arrived I was delighted. Yes, there are some chips and they do show up in this colour, but it remains the best I've had so far. 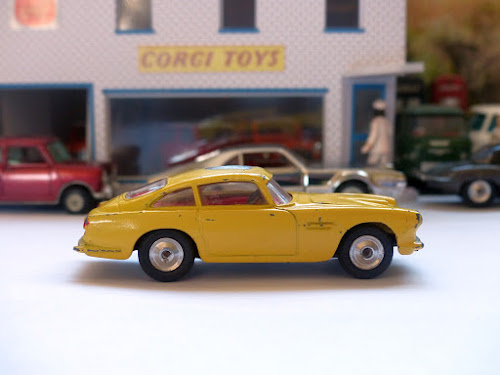 Also in yellow, but no such a dramatic shade, is another rare item which you might not expect to be rare. The 218 Aston Martin with fixed shaped wheels was only produced for a very short time, most fixed wheel editions having either the original smooth wheels or the cast type with a sort of criss-cross design that was supposed to indicate wire wheels but never worked in my view.
Now I have both red and yellow editions but, like the Land Rover, I still need to find something in more reasonable condition. This one may appear quite decent but the roof is badly scraped. 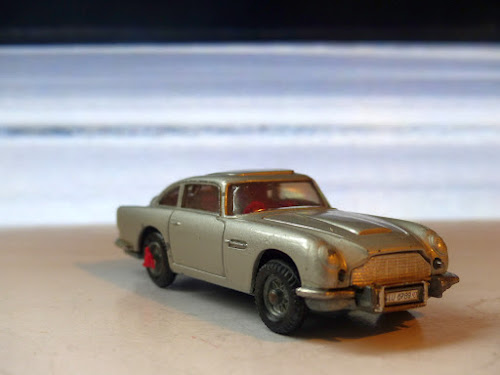 Another fairly scarce model is this Aston Martin James Bond model. The 270 in silver was issued in 1968 and started with silver grille and bumpers. For some reason these were very quickly replaced by gold fittings. Later changes when Whizzwheels were introduced have resulted in a couple of the very last editions also being quite rear with different base features and you can read about these in my Catalogue. This first edition, though, is the one that is most sought after. Despite there being a large quantity being produced these are still hard to find in original condition and with everything still functioning (and you'll need to consult your bank manager if you want an original bubble-style box and all the contents!).
This one is pretty good with an almost flat roof when at rest but, like many I have seen, it came without a front bumper. As the only bits that appear missing are the left and right sections and there is a large open gap between the body and base where they could be slotted in, I had a go at repairing it. It seems to have worked pretty well. OK, so it's not now entirely original but clean examples of these still make over £100 even in modestly good condition. 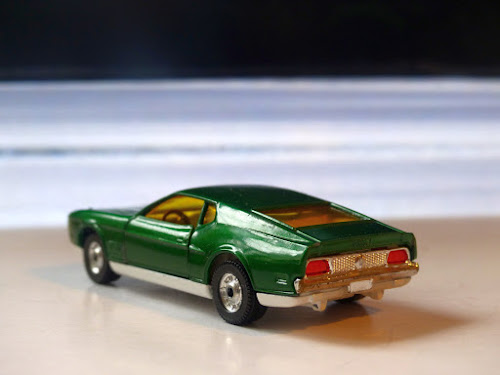 I tend to give most Whizzwheels models quite a wide berth but by 1973 someone had done something about the terrible plastic wheels and models were sporting some quite attractive wheels and looking smart again. One fine example is the Ford Mustang Mach 1, usually seen in red as a James Bond edition. That was 391 and available for a short period in 1972. Clearly, there must have been a lot of models still to come to market and someone decided to paint them a pleasant shade of metallic green and call them a Rally Edition.
All would have been well but probably the same person decided to add some paper stickers not just to the doors but to the bonnet, roof and, for good measure, why not the upper rear wings too! I can only guess that they must have been a nightmare to attach as I have only ever seen two with them looking reasonably straight. Fortunately, a few models escaped without the stickers and they look so much better.
If you're thinking that it's just a model with the stickers removed then, having tried that in the past and failed miserably, I'd say that was less likely than it being issued this way. Exposed to the air the adhesive used seems to turn to some sort of rock-hard super glue compound. Try peeling a sticker off and the paper tears leaving the annoying substance affixed to the paint. Most attempts to remove that will remove a layer of paint finish too which rather defeats the whole purpose!
Lastly for this post, I have a spare Chrome edition of the 2006 50th Anniversary edition of the Ford Consul. With made in China on the base it is not something I would normally want to promote but I do like the few 50th Anniversary models and have quite a lot of respect for the production quality of this model (and the four other variations).

With a limited edition of just 650 they are quite scarce although they do regularly appear for sale. Unlike something like the AVRO BODE edition of the Bedford CA 421 van in 1961 which had a similar production quantity, most of the Ford Consuls have been kept safely on shelves in collectors' homes! As with mine, they'll also have their original boxes, packing and leaflets. That packing isn't, though, something to get excited about. This model was placed unceremoniously in a ghastly bit of thin phlegm-coloured plastic shaped for the car that early Vanguards model collectors will be familiar with. Horrible but at least the outer box was half-decent. 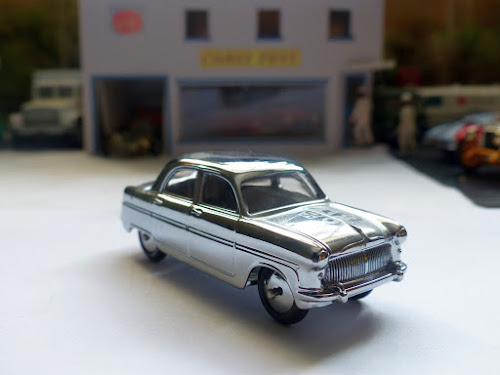