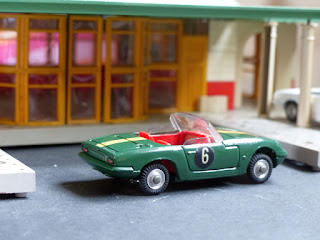 Not all Lotus Elans are the same. The model number may be 318 for all of the open top versions but you'll see that this green one with a yellow stripe has the detachable chassis that you may have been more familiar finding on 319, the hard top Coupé. 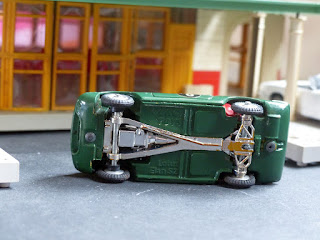 Although some may have found their way into individual model boxes, this was really intended to be issued only as part of Gift Set 37, the Lotus Racing set. The set included the open and hard top cars with interchangeable chasses and a white VW Rescue Truck with a red trailer and a third chassis, as well as the Lotus Climax racing car and some bollards.

I could never quite figure out what the attraction of the removable chassis was as they were identical so changing them over seemed a bit pointless! 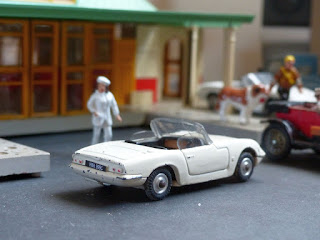 In white, the Lotus lost its driver and sticker on the boot to become Emma Peel's car from the first TV series of The Avengers. 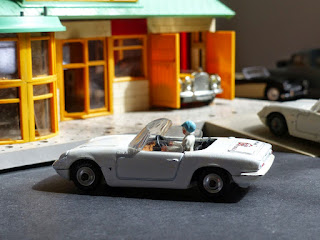 Occasionally you might find white ones with the I've Got A Tiger In My Tank sticker and a driver but most would be a silver-blue colour. 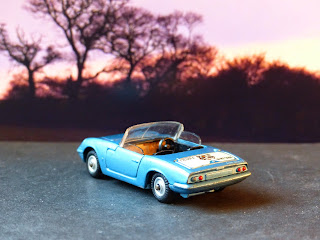 Racing Number decals were supplied - usually 2, 3 5 or 6 in white on black circles. I always thought the car looked so much better without them but they're only paper so can be easily removed or reapplied as you please. 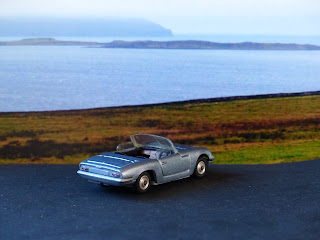 For my alternative sets for The Avengers, I created a slightly darker shade of silver-blue to match better the car that Mrs Peel used in the colour TV series - the second series on.

A colour trial of a pea green version was produced but you'll not see this for sale anywhere!

Most 319s that came in boxes had larger, cast wheels and never really sat as they should, appearing too high off the ground. The Racing Set version, however, always in yellow with a green stripe had the smaller wheels and looked much better. 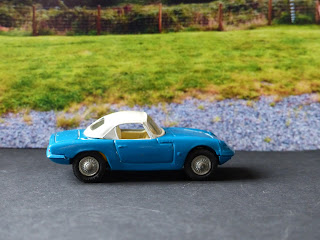 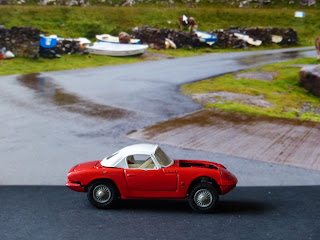 Remarkably, the interiors are the same across the range. So you have folding seats in the hard top even though you can barely get at them! There are three colours - cream for all the 319s, red for the Racing Set 318 and black for the white and silver-blue cars.

There is just one other variation I have encountered - small cast wheels on a white 318 that I think came from a late Avengers set. I have not seen either red or blue 319s with normal wheels. I suppose someone could switch the chassis over but I don't think they were sold in that format. I must try one day, just to see what the alternative versions look like.

Often overlooked in listings of Corgi Toys from the era before things went wrong are the Classics that they produced from around 1964. These were beautifully detailed models of jalopies from yesteryear and that, of course, may have been one of the terms they had in mind at the time as Matchbox had established a good name in this field already with their 'Yesteryear' brand.

These were not models that kids would zoom around the floor, though, and were, perhaps, the first that may really have been aimed at older collectors, not just because they were a bit staid in comparison to Oldsmobile Toronados or Buick Rivieras but they had bits that might break off more easily. I remember that I had no interest in them at all and only had the Steed Bentley because I had been a huge fan of The Avengers and my parents bought me the Gift Set. The Lotus was well played with but the Bentley, to this day, stayed virtually unmarked.

That set, however, was not where things started and may even have only come about as a result of sales of the Bentleys not being exactly massive. It all started with a green 'racing' edition which came with a hood and a driver clad in what looked like a pile of bandages. I didn't put the driver in the photos. 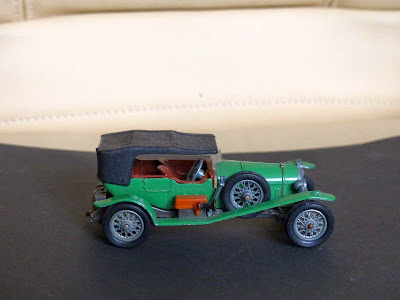 The wheels of 9001 were always steel and it can be identified from similar models by having white Racing Number 3 on the rear and radiator grill. There is also a Union Jack on the passenger door panel. 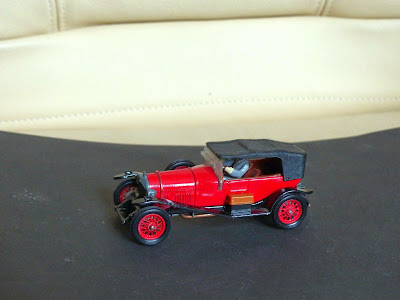 In the first launch also was 9002, a red Bentley, just the same as 9001 but this had red wheels and no Racing Numbers. It had the same full hood. I think it also had a driver who still seemed to be wearing bandages but not as white.

The same Bentley appeared later in Gift Set 40, as Steed's vehicle from The Avengers TV series. Most were red with steel wheels but there were also green Bentleys (which would have been a more appropriate colour as Steed never actually had a red one!) which were like 9001 but with no Racing Numbers or Union Jack. In either case the full hood was replaced by a folded variety. The green Bentley would have red or steel wheels. A figure of John Steed, dressed in a grey-brown suit and tie would be at the wheel. 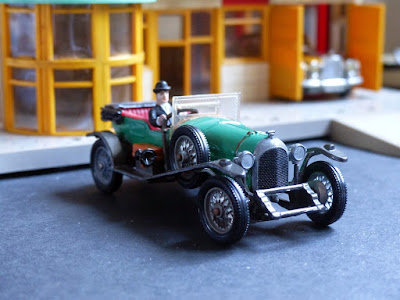 Much later than all the others, the same Bentley re-appeared as 9004 in green again but this time with grey-black rails and a much brighter red-brown interior. Jeeves would be at the wheel with his master, Bertie Wooster, leaning against the car in quite a remarkable tweed suit and nice reproduction of his monocle.
This would have steel wheels and, again, no Racing Numbers or flag. 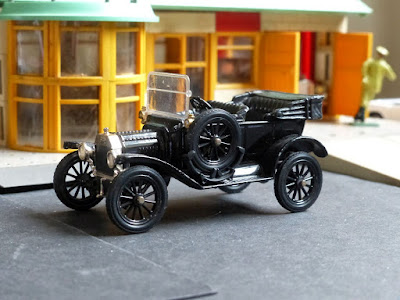 After the Bentleys came the Ford Model T cars. Again, wonderfully well-made but quite vulnerable to damage. the screens on these are often broken. First was 9011 in black with a couple of figures. 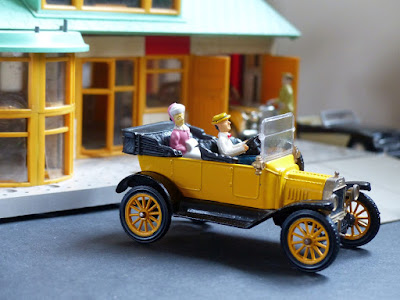 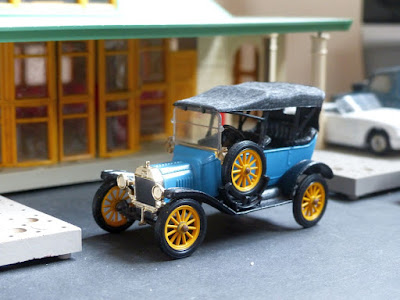 9013 was the Model T in blue and came with a fixed full hood. It also had a chap leaning down at the front, grabbing the starter handle. I have him but he isn't in the photo.

The catalogues illustrate 9014, a Lyons Tea Model T commercial vehicle but that never made it into production. 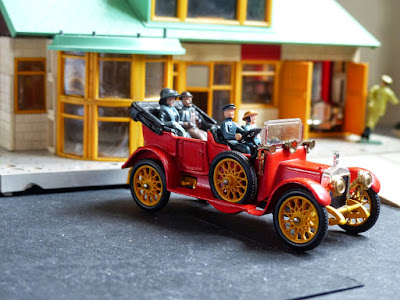 9021 is a very impressive and bright Daimler. This is packed with characters and is also a very heavy model compared to the others. The bright red paint and yellow wheels really look quite extraordinary. I totally missed this car at the time and it was only a few months ago that I became acquainted with it. There's no way I would have bought one then. Now, you'll see in the catalogues another Daimler described as 9022 with a hood, I think it is in dark blue. This never made it into production although I have seen a pre-production example from the factory and maybe some are circulating. 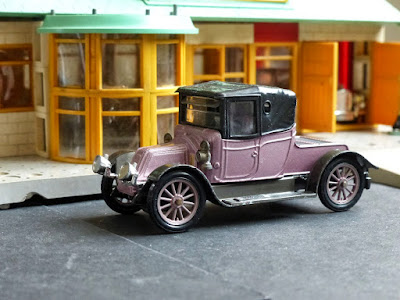 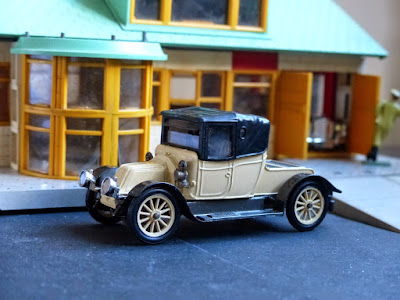 In other respects these are identical and had no characters with them, a cheaper option all round. 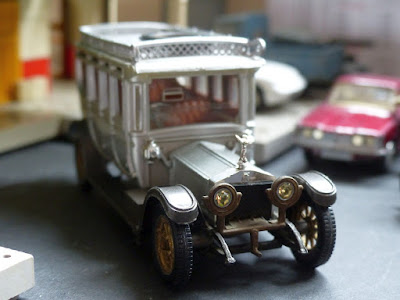 The series ends quite soon after it began with this extremely old-fashioned and rather unappealing to the young Rolls Royce Silver Cloud which is more like a bus than a car. It is, again, beautifully made, with remarkable detail, jewelled headlamps on this one and the flying lady on the radiator. I have two varieties: one with gold wheels and a grey exhaust, another with steel colour wheels and  a black exhaust.

These are all models for older folk to display. Indeed, most came with picture boxes and some had stands included or a sort of street scene illustration inside the box. Not the Rolls, though, which came in a ubiquitous bubble pack - quite inappropriate for that class of vehicle! Cost were being cut, though, and these didn't sell well. Many were made, though, and as a consequence you can but these for really low prices, even with their boxes.

If you just want to buy the cars themselves then you'll find Rolls Royces going for £10-£20 and the Renaults and Fords seldom cost more than £30. The Bentleys can be a bit more expensive, often because people confuse them with Steed's from the Gift Set. A 9001 would be £30-£40, a 9002 £40 -£50 and the most expensive is the comparatively scarce 9004 with Jeeves and Wooster at around £60.

An original Steed's Bentley in good condition may also cost you around £60. Most green ones I encounter are adaptations of one of the others and original green Steed's Bentleys are likely to be a bit more.

If you ignore the Bentleys, though, you'll realise that you can have a complete set of the Classics, all easily found in A/A+ condition, on display for less than £100.

And another jewelled bronze Hillman Imp 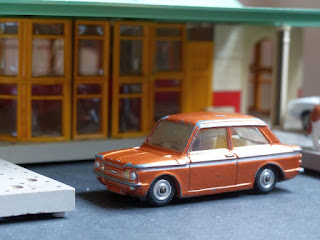 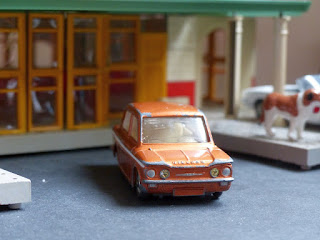 Having never seen the bronze Hillman Imp with jewels before, I now find myself with two of them in a matter of weeks!

This one is rather better paint-wise and the screens are all intact apart from a small scratch on the windscreen. Its suspension, however, is as flat as a pancake, non-existent. Such a shame and I can't see a way to repair it without taking the car apart which I don't want to do. The base on the other one is quite loose, though, and I can't see anyone wanting it with no front suspension, broken windows and no opening rear window so that one I may decide to work on. If I can find some suitable bronze paint, and a tailgate that is. My only concern is that it could just as easily be regarded then as a more common #328 that someone has resprayed. Now, I do have a set of #328 Monte Carlo transfers. Hmm. Watch this space.

I hope the suspension is reasonable easy to fix. I've never looked inside one before but guess some plastic is broken.