There are fewer greens in Brussells

I saw this and bought it from someone in Belgium. It wasn't expensive and looked like a nice example of the silver-blue shade that is quiet hard to come by. I did have one a while ago but it was snapped up by someone in Italy almost as soon as it arrived here.

This is the photo that caught my attention. 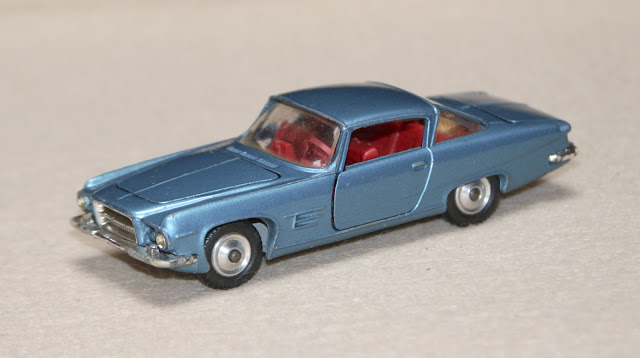 The model shown below is what arrived! At first I thought the chap must have had a few Ghias and had merely thrown the wrong one in the envelope. 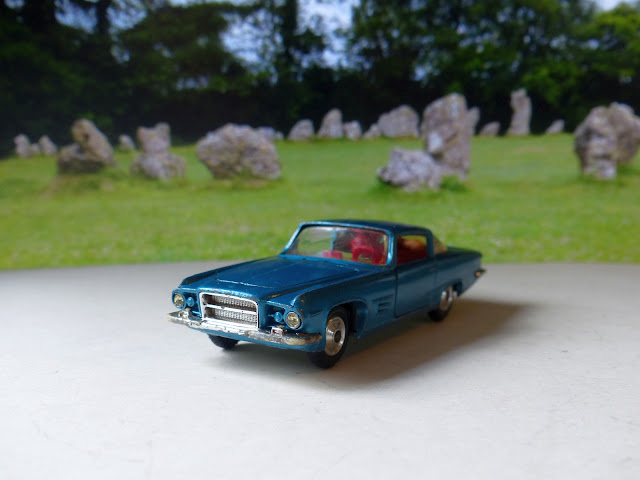 Whilst wondering whether I would have to communicate in Flemish or some Wallonian dialect to request the right model, I found the original advertisement and, fortunately, the Belgian had supplied some pretty good photos. It was soon clear that he had, indeed, supplied the correct car. It may not be obvious from the photos shown here but I can assure you that they are of the same model.

The car is actually what seems to be quite a common shade of dark turquoise, which I see often and have several examples of already. My photo makes it appear slightly more 'dark blue' than it should be and the Belgian's considerably more silver with a complete absence of any green in both our photos but, sitting in front of me now is a distinctly deep turquoise model which definitely has some green in the mix.

I have used some software to change the shade a little to illustrate better what I see in front of me. 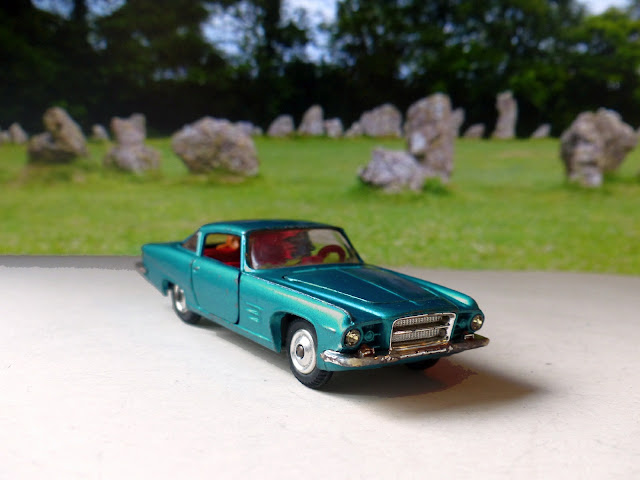 Different again, I fear! But that is the car I have, the others are imposters, colour-shifters from some alien planet, via Belgium.

Of course, this is simply what my eyes show me. For all I know you are seeing something completely different and maybe some readers are getting excited at the possibility of a crimson Ghia! 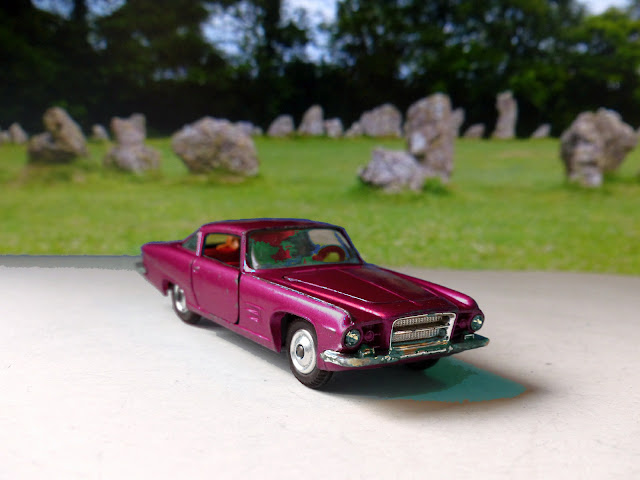 The Wilford Collection Pt 5: The Daimler that was not 'Available Later' and odd Bentleys

The 1966 and 1967 Corgi catalogues included illustrations of 9022, a 1910 Daimler 38 with a hood, marked as AVAILABLE LATER. To all intents and purposes this looked like 9021, a red Daimler 38 with folded back hood and driver plus a full load of passengers, but painted blue with a red-brown closed hood.

Corgi were good at making one casting do several things. This one, however, never got into production. What I have here is a sample, looking almost complete but lacking a steering wheel. 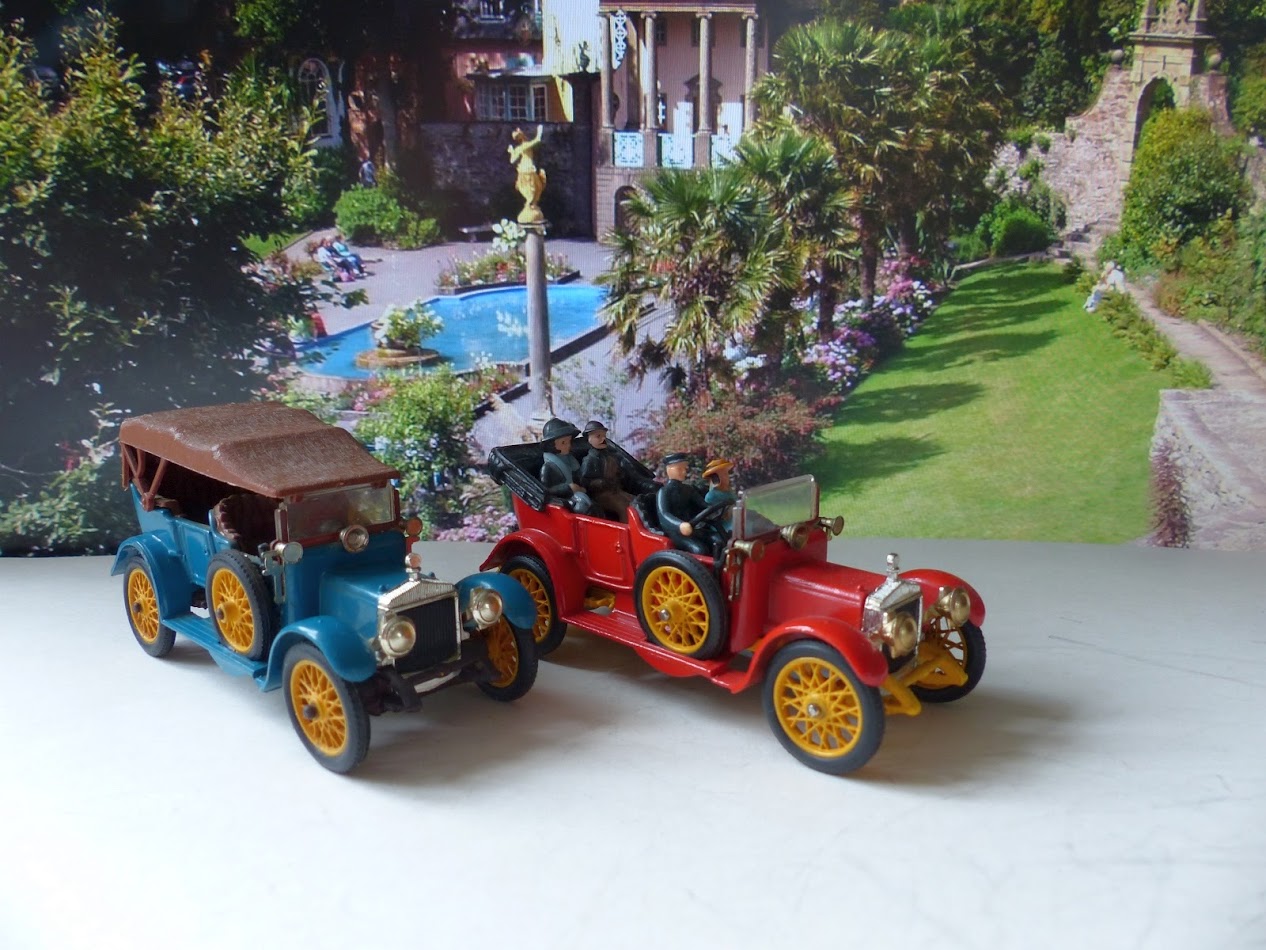 A full selection of images of this unique item can be seen here.

It is in excellent condition with no chips or scratches, the screen has survived and so too has the vulnerable radiator emblem.

I also have the 9021 Daimler which may also have been a sample but it appears indistinguishable from examples of issued models that I have. I would, nevertheless, prefer to see these kept together in case, at some point, someone does spot some differences. Shown above is a production model and, below, the model in the Wilford Collection. 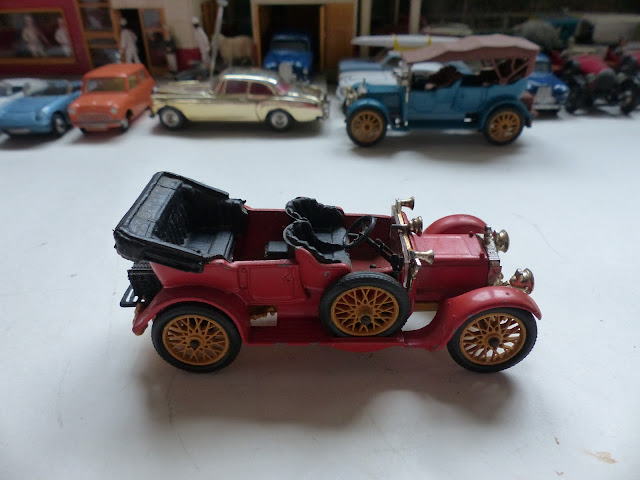 What is quite different, however, is one of the 1927 Bentley 3 Litres in the collection. This clearly was intended to be an example of a model with the hood down by the look of the windscreen(s) which would not have supported the full length hood. The horn on the side is painted bright silver, as opposed to the black on issued models, and there is a very detailed dashboard with a tremendously realistic-looking (albeit rather small) steering wheel. This needs a rear folded hood, in my view, but they are simple enough to obtain and I may well supply one with this when sold. 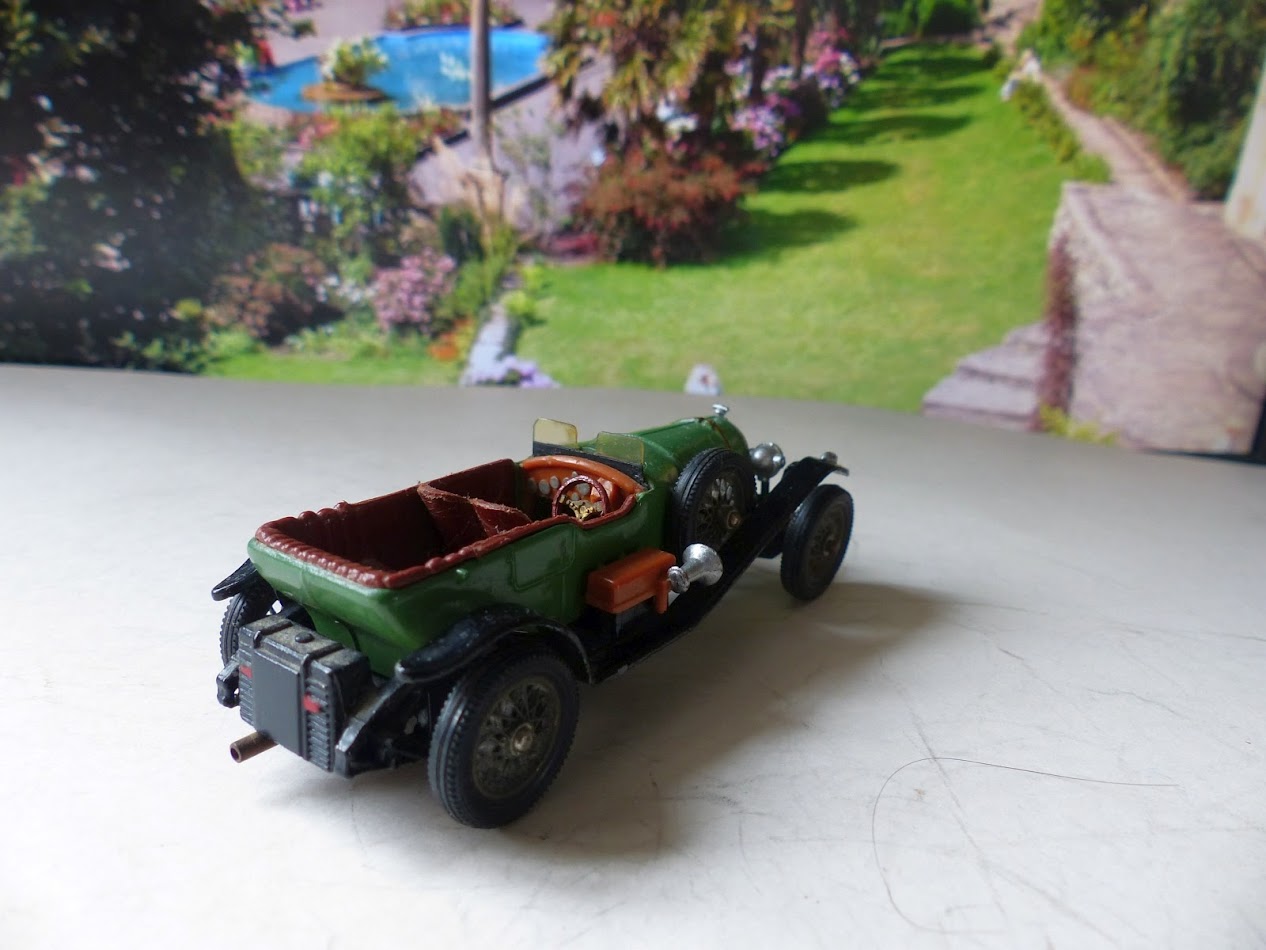 You can see where the idea for this style of screen came from. 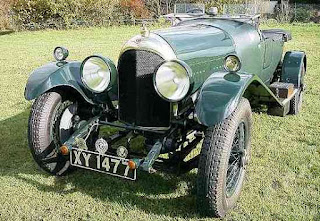 Whether this was an early sample for what would become 9001 I do not know. It may also have been the older Mr Wilford's team working with an existing 9001/2 body to create a different edition, perhaps even an idea for Steed's Bentley in the Avengers Gift Set. It would have been in keeping with the Bentley they might have seen in the instalment this screenshot came from: However, here's John Steed again in a Bentley with the same registration - but it's  on a 3 litre car now not the 4½ litre! I have visions of some confusion in the office as the series progressed! Do they re-brand the model 4½ litre? Do they move the spare wheel, not just from left to right but maybe to the rear? That might explain the odd editions that they did include, none of which bear more than passing resemblance to any of the Steed vehicles.

Another Bentley was in the Wilford office drawer. It looks like a standard 9001 at first glance. 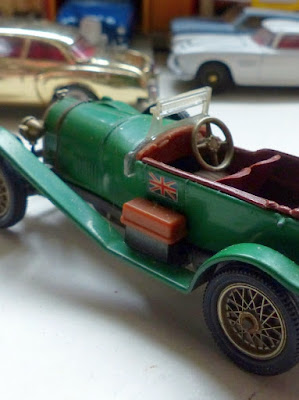 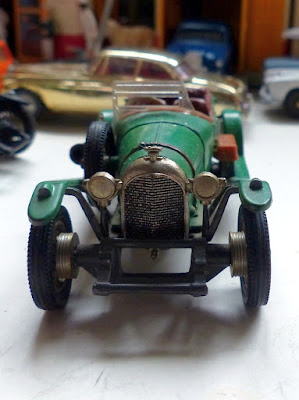 The wheels, radiator and headlamp unit and handbrake are all in a gold-coloured metal rather than the usual grey or silver colour. We know that this gold colour appears on the 9004 Jeeves & Wooster Bentley and, reportedly, in some Avengers Sets but this one has a RN3 on the back and the Union flag on the passenger door à la 9001.

The screen has a chunk missing and this also needs a hood of some type but is otherwise complete and in very good condition. It is certainly another unusual edition and will be made available soon, possibly paired with the small twin screen edition and a complete 9002 from the same source that does seem totally standard. 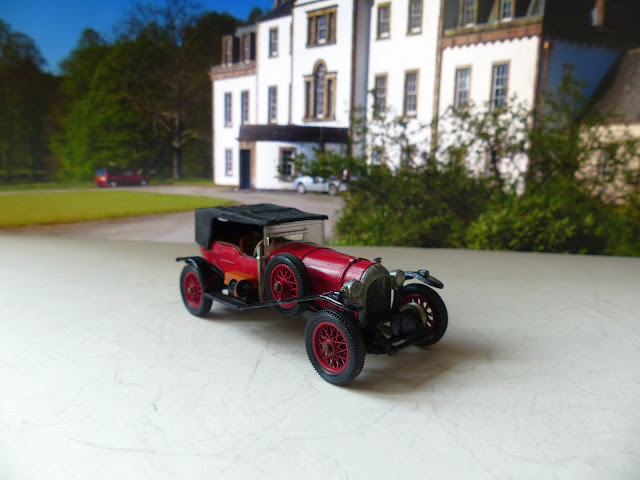 More images of the small screen Bentley, the gold wheel 9001 and this red 9002 are available. 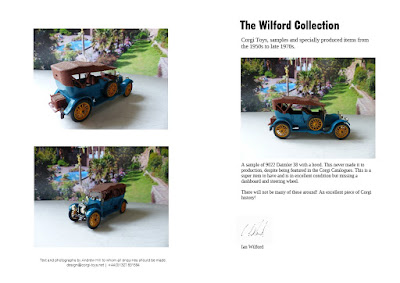 I do believe that the 9022 Daimler is unique in being the only proposed model that remained AVAILABLE LATER across two catalogue printings.

As I have spent most of the last two weeks studying Minis and creating ever-lengthening lists of what collectors may wish to search for, it seems appropriate to take a break from the gold and probably very expensive items and look at some of the more 'normal' models that I have available from the office drawers of the two Mr Wilfords.

Included in this post are five Rally Mini Coopers from the 1964-66 period and a reproduction of the Wilford family Mini from 1972.

The Mini Coopers all have a little extra detailing in silver and all but the Sun Rally 333 models have what seem to be unique Monte Carlo decals, being noticeably smaller than those on the issued models. Apart from the extra detailing, the Sun Rally models do look like those that were issued. 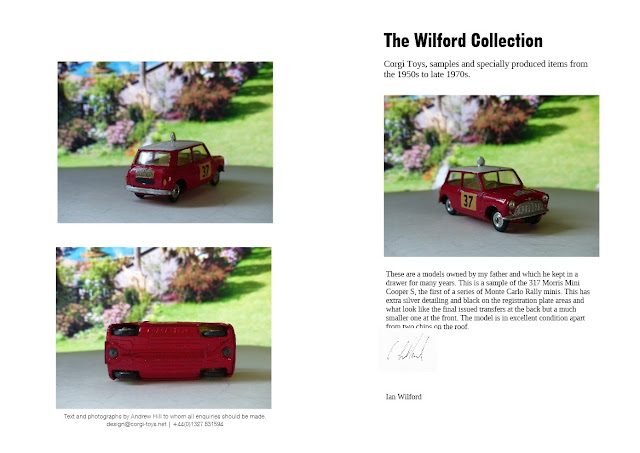 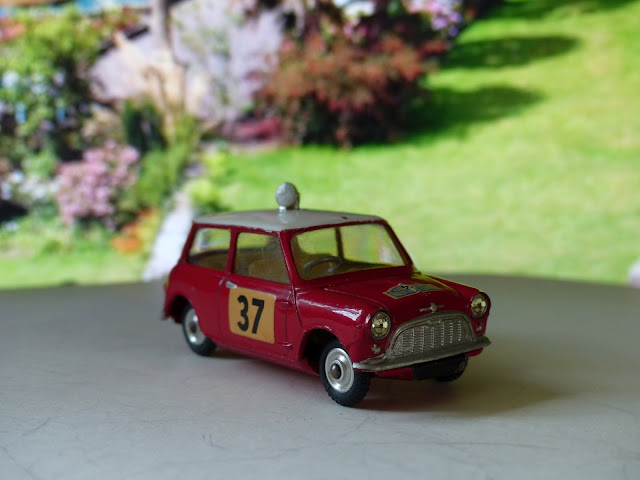 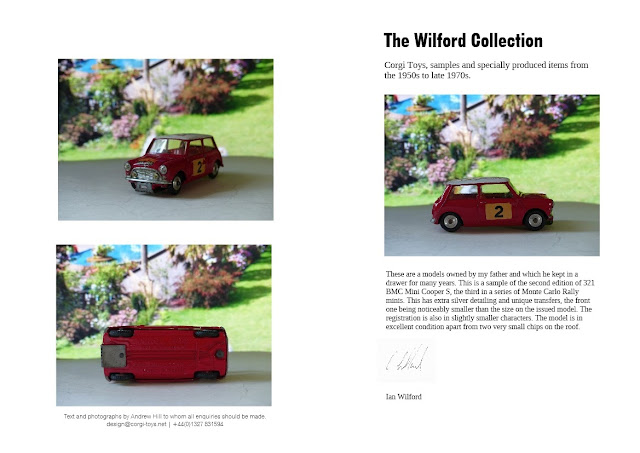 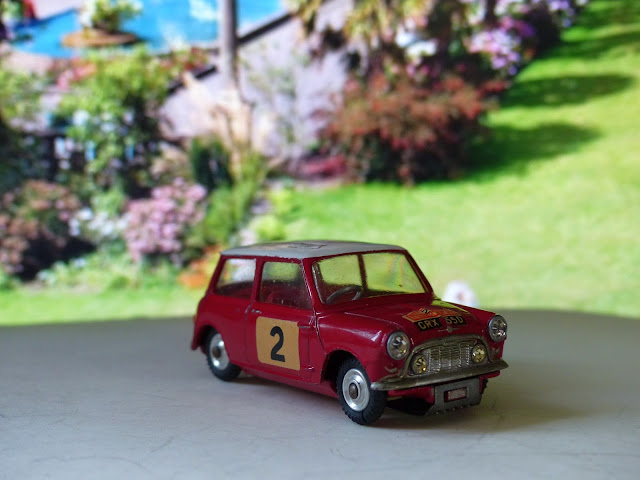 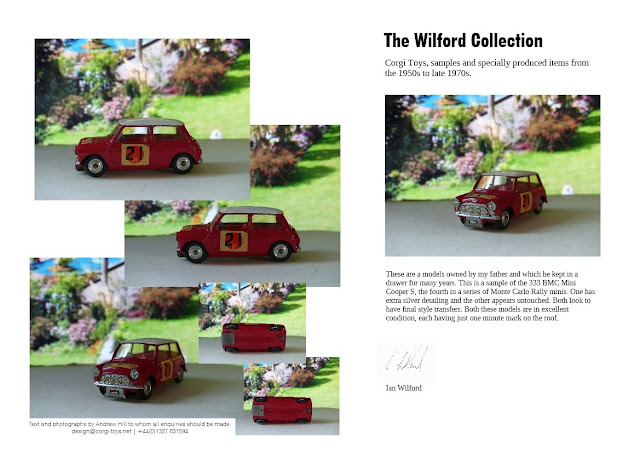 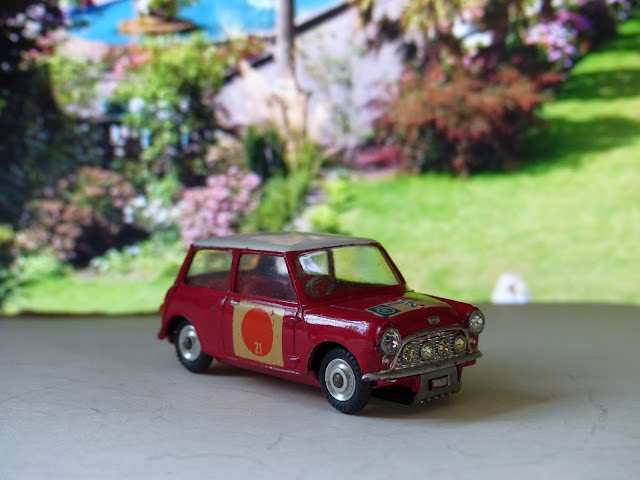 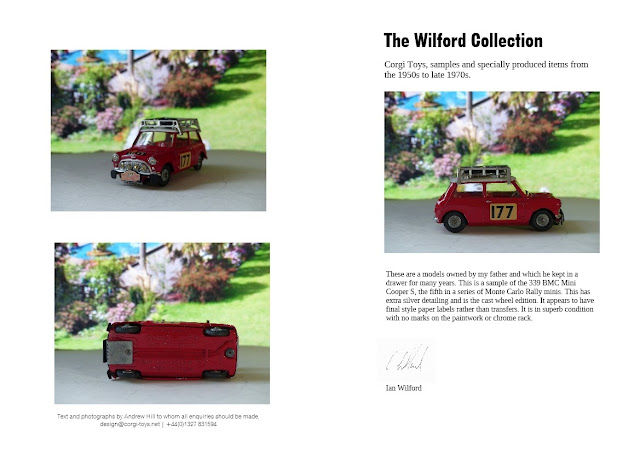 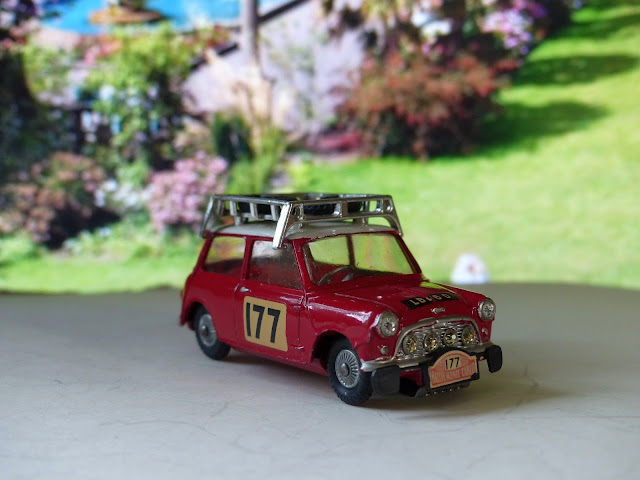 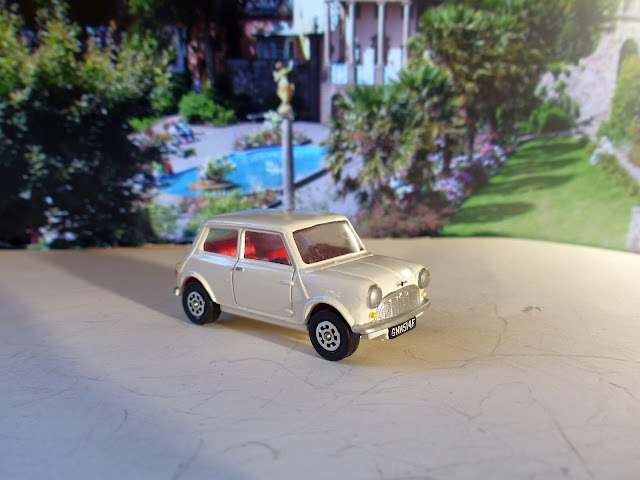 It is a little sad, perhaps that a Whizzwheels edition of the Morris Mini Minor was used! The old shaped wheels were a far better likeness to the real thing. Below is a 1966 advert for the Morris. The model is otherwise really very good! 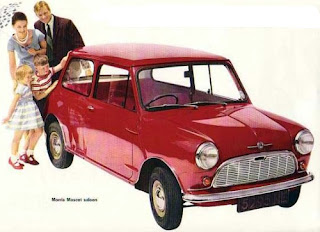 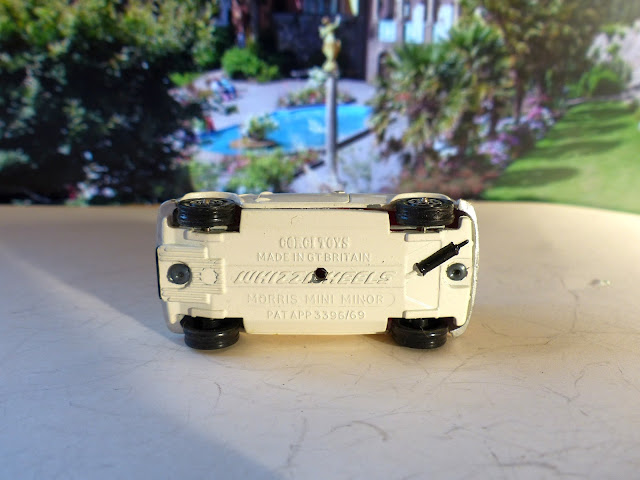 This is a charming little item, with all the little details presumably added by Mr Wilford who then mounted the car using a simple bolt through a varnished wood base. 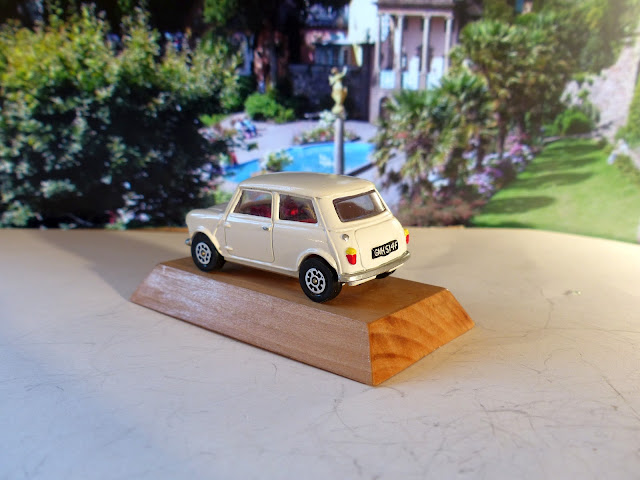 The unique Rally Minis should fetch a good premium over and above the price one would expect to pay for the normal models and the company connection should add some value to the two 333s too which are themselves identifiable with the extra detailing.

The Wilford family Mini is just a delightful item to have and if you must have a Whizzwheels Corgi Mini then I guess this will be as good as any! So Mini collectors, get in touch and reserve any that you might like. These are being made available only here and on my main site at the moment to give our regular visitors and colleagues the first chances of acquiring them. 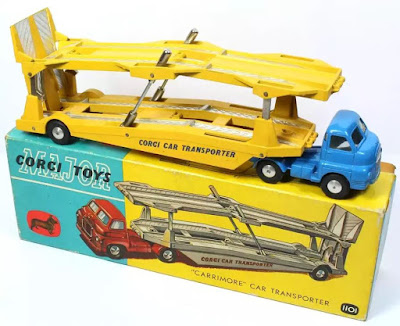 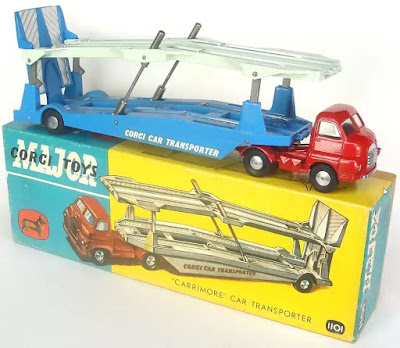 October saw the first of several car transporters, the first of the Corgi 'Majors', and this also was the debut of the Bedford 'S' Type tractor unit. That unit would appear on a wide range of models for many more years.

The twin deck car transporter was a great model for children but expensive at 18/6d. Unless you had a birthday beforehand, this was more likely to be a Christmas present, if anything. The rear ramp would fold down and the precisely engineered 'hydraulic' supports would allow the top deck to be lowered slowly so that cars could be driven on in a very realistic manner.

This would be made available in Corgi's first Gift Set in December with four cars aboard. You'll have to wait until then to discover which were the first cars.

The cab was either red, pulling a blue and grey deck or blue with an all yellow deck. The former is by far the more commonly found now. The 'Majors' were produced in a much more appropriate scale - similar to that used for cars, although the comparatively small commercial lorries would also still continue for some time yet. They would look quite odd parked next to the Transporter.

The cab would be changed in 1962 but the deck section would remain largely unchanged through to 1966, getting suspension and a different base but, I think, the same ramp and transport sections.