The Mystery of The Wheels 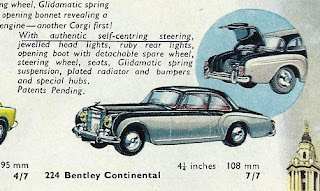 The 1961 Corgi Toys Catalogue was the first to illustrate the Bentley Continental. This year was the start of all the exciting 'features' that were being incorporated in many new models. Corgi threw everything at the Bentley - as the catalogue text says: steering, jewelled head lights, ruby rear lights, opening boot, spare wheel, chrome plated radiator and bumpers, special hubs...

Special hubs? The illustration doesn't show anything different - they look like the flat wheels common at the time. 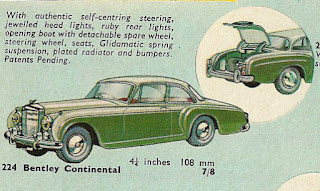 As we know the car appeared with all those lovely features except for the special hubs. It was the star of the show anyway so I, for one, didn't pay any more attention to the difference at the time. It had the shaped hubs but then so too did plenty of other models so I don't think this was the first time they'd been seen, nor would it have been the first with free spinning wheels. Or was it? Could it be that the first occasion when free spinning wheels were made available was, indeed, on the Bentley in April 1961?

We know that examples of most other models released before that could be found with shaped hubs but most were still fixed. Only a few, like the Aston Martin, Morris Mini Minor and Austin Seven would get free spinning wheels but they might well have been rather later than April 1961. We know that Corgi were playing with the idea of making the wheels spin independently at about this time as some 303S and 304S Mercedes re-issues with suspension had the old style flat wheels spinning freely so it is possible that this may have been what they meant when the catalogue was drafted.

Alternatively, there may have been a plan to create a wheel that more closely resembled the classy hubs of the real thing, perhaps with bright chrome. I have no idea. All we know for sure is that the Bentley was the only model ever produced with pale grey tyres!

There was another mystery in the 1963 catalogue, also repeated in The Great Book of Corgi: spoked wheels for the Mercedes 303s, 304S and Aston Martin 309.

The catalogue has quite clear pictures of what look like the spoked wheels used for the Buick Riviera, Chevrolet Sting Ray and others fitted to these models. 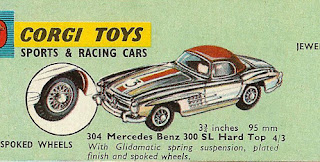 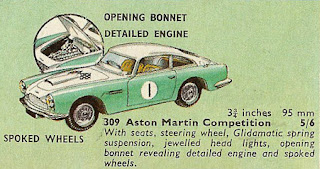 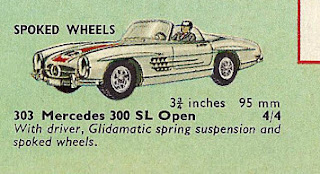 What seems to have happened is that a cast wheel, with a spoke effect design (to be used across the range in years to come), was fitted to later editions of the two Mercedes models. These were discontinued soon afterwards so they're not at all common. The 218 yellow or red Aston Martins had had a crude spoke effect cast wheel only ever found on that model and it was also fixed the the axle and not at all attractive. That was discontinued in 1962, though, and mercifully we never saw those wheels again.

I have never seen any 309 Aston Martin, however, with anything other than free spinning, shaped wheels. I am surprised that they didn't fit the same cast, spoke effect wheels as they used for the Mercedes, especially as they presumably were planning these at the same time. If there ever were any Aston Martins with those cast wheels or spoked wheels then they must be seriously rare. It is not particularly difficult for someone with the right tools to switch the wheels so I am inclined to be a bit suspicious of any I did encounter anyway. But if someone would like to have a go I would love to see one! 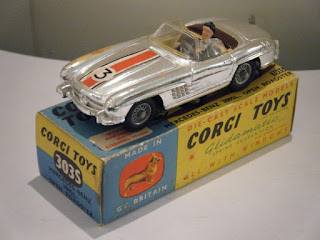 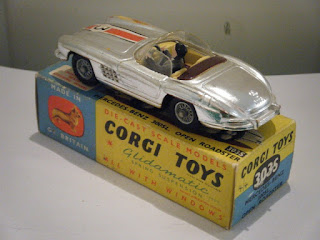 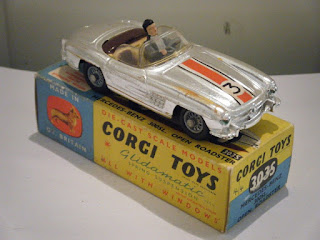 Interestingly, the seller has not shown the base which always makes me wonder, especially as this is a dealer who should know to include that. He's asking £250 which, if it's genuine, seems very reasonable. Unfortunately, I can't afford that. He has another in better condition but with the cast, spoke effect wheels, at £350. Something wrong there. It ought to be the other way round. Anyway, it looks like the Mercedes may exist. 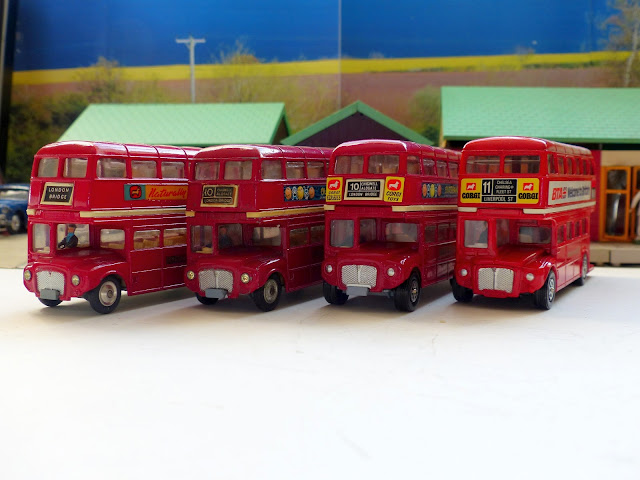 One of the iconic models in the Corgi collection is the Routemaster London Bus. You'll see thousands of these littered across auction listings, in boxes at fairs and even on some people's shelves at home. Like the real thing, it lasted a very long time. Indeed, as far as I can tell, it is still being produced to this day. For the period I am concerned with, however, there are just a few editions to look for.

The first is the original released in Summer 1964 and bearing the totally appropriate 'Corgi' banners. With jewelled headlamps, suspension and nicely detailed interior, including the louvred window tops and driver and ticket collector, this was Corgi doing what it did best. 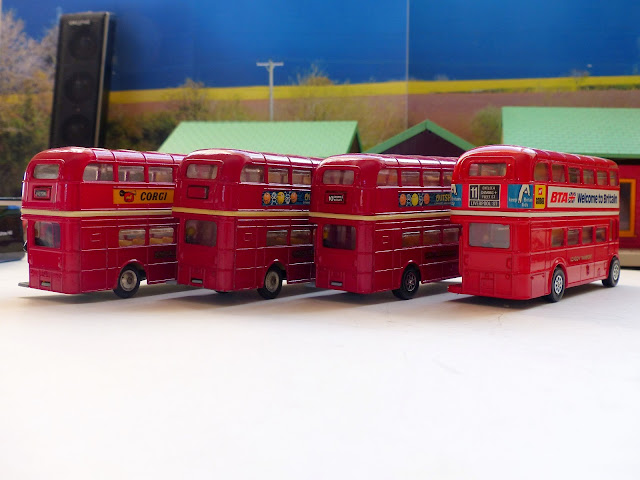 A couple of years later, someone had the bright idea of using the banners as real promotion and it seems that Outspan oranges got the first deal and their banners are by far the most commonly encountered and lasted the life of the model in that form. There was a green and cream edition produced for the Australian market but that is very hard to find and sells for huge amounts if any ever do appear. 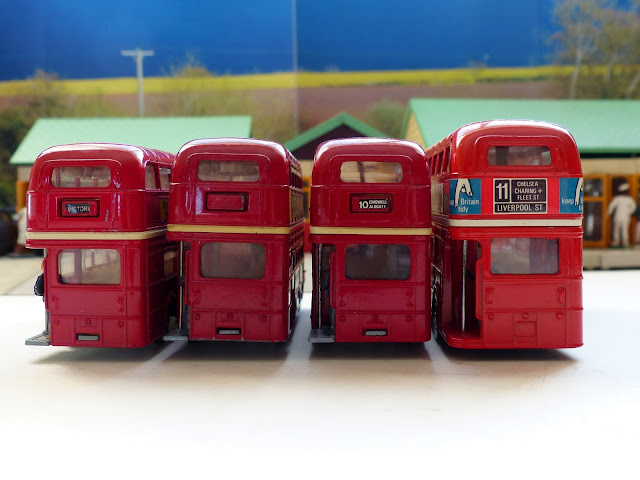 I think that the very earliest editions didn't have the additional stickers to the left and right of the destination board and that, itself, looks very simple on my example. Maybe they did look like that in those days but my recollection is more aligned with the board that shows a number and more information. I used to think my stickers had fallen off but now I think that's how it was sold. The early Corgi catalogues illustrate a model without the additional stickers and with the simple front board and no side destination board.

After Outspan Oranges came more special promotions for shops and products. These included a Candian issue advertising Red Rose Tea and Coffee, the London Gamages store, Church Shoes, Madame Tusauds, The Design Centre and Cokechu 2d. Some of these were only available late in the model's life so may be hard to find. However, not all owners realise that and you may still see them for a few pounds if you're lucky. 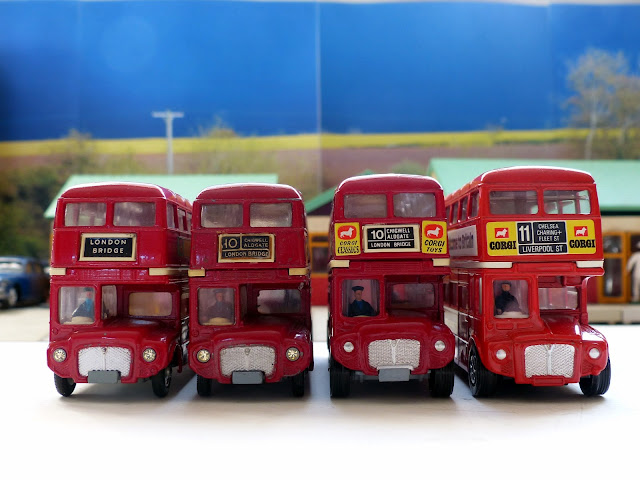 The wheels changed to the cast type at about the same time as Outspan Oranges appeared but I believe you'll find both Corgi Classics with cast wheels and Outspan with normal wheels (although each will be a little scarcer).

Then in around 1971 the dreaded Whizzwheels were fitted to the bus too. That seems just plain silly to me as no child was going to race his London bus along those Whizzwheel tracks and there really was no need to try and compete with other 'Go Faster' competitors when it came to double decker buses! Cost must have been the real reason and, at the same time, a few other changes were made. The Whizzwheels one has a clear plastic staircase in place of the cream and gone are the jewelled headlamps.

The ticket collector lady looks slightly different, as does the driver, but it's not a great difference in either case. I have seen the lady standing in different places on these editions too. 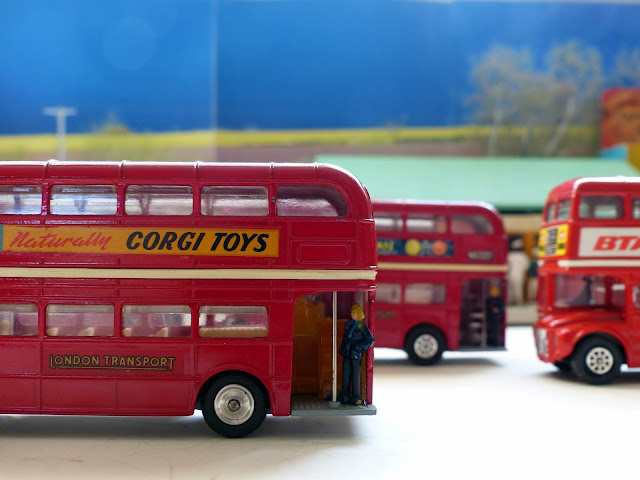 I don't know how long the Whizzwheels version was around and they seem less common than the cast wheel version. 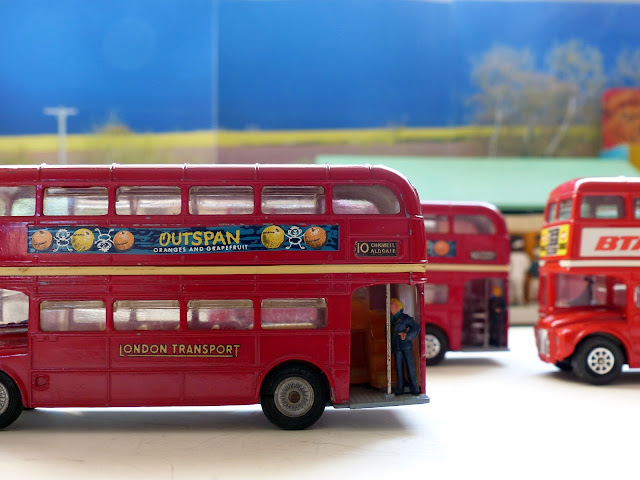 Examples of both the cast wheels and Whizzwheels versions are still available at very modest prices, though. 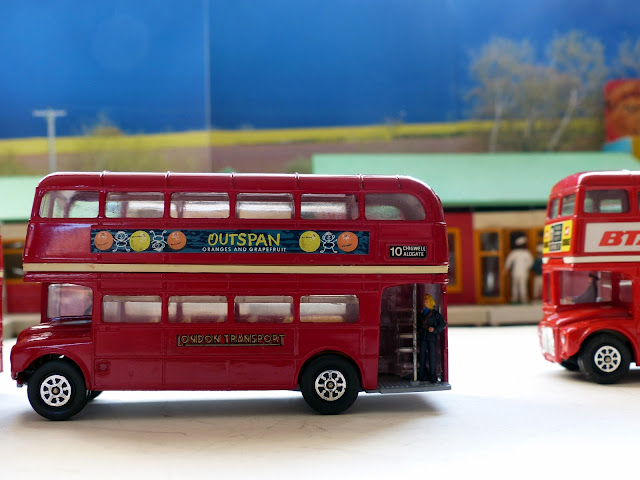 The one problem I have always had with the double decker bus is its size. It is simply the wrong scale and looks a bit strange next to most of the other models. It appears tiny in sets with a 418 taxi and a comparatively giant-like policeman!

That got sorted rather late in the day when in April 1975, #469 appears in a slightly larger scale. 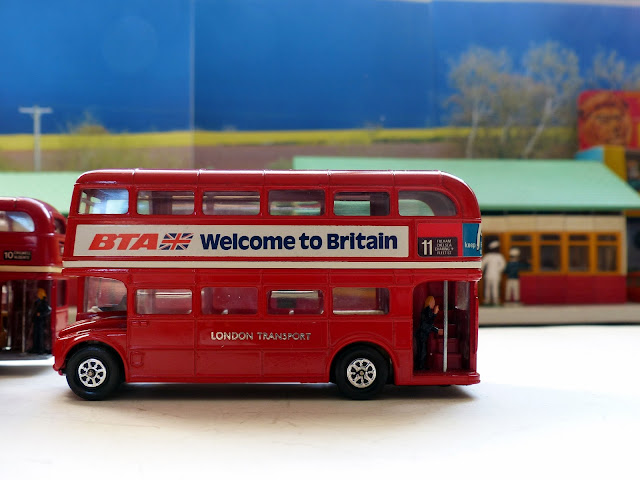 There are literally hundreds of variations of this one! Corgi really did press the promotion money button now and a pound will buy many of them too. The first, however, is worth getting and that had the Welcome to Britain banner. It is further dumbed down with a plastic base and less detail inside but, in many respects, is not a bad model and you need to put it side by side with its predecessor to see the difference. 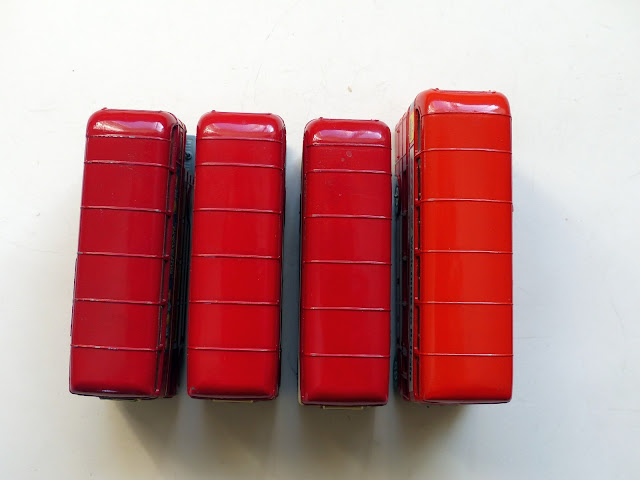 Somewhere along the line both the driver and ticket collector get sacked and the later issues are bland affairs with nothing much going for them other than the vast array of different banners and now colours too. As well as a Silver Jubilee edition in 1977, there are all sorts of colours and banners. There are even open top buses with the 469 number! So good luck with that lot if you do decide to keep going with them! This, however, is where I get off! 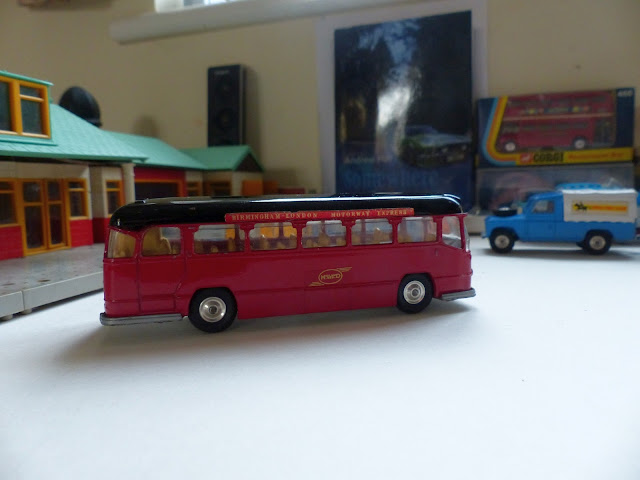 I much prefer the lovely old 1120 Midland Motorway Express.

Mixed Grill For The Mini Van 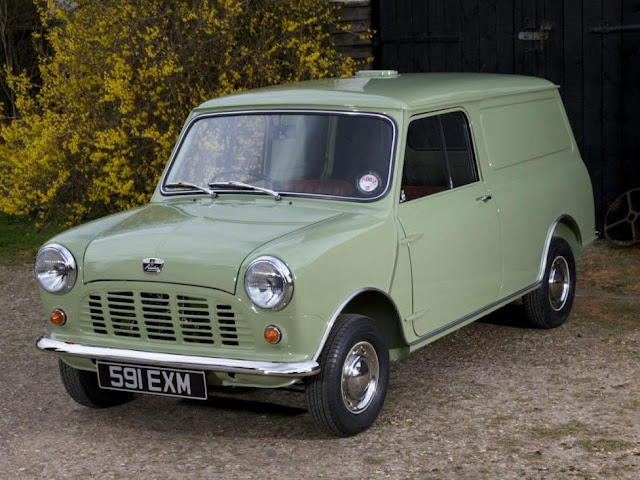 Corgi made a superb job of reproducing the Mini Van and I am surprised that it was only produced for a little more than a year, appearing in December 1964 and discontinued in 1966.

In that short time, however, even this otherwise quite bland model had some variations! 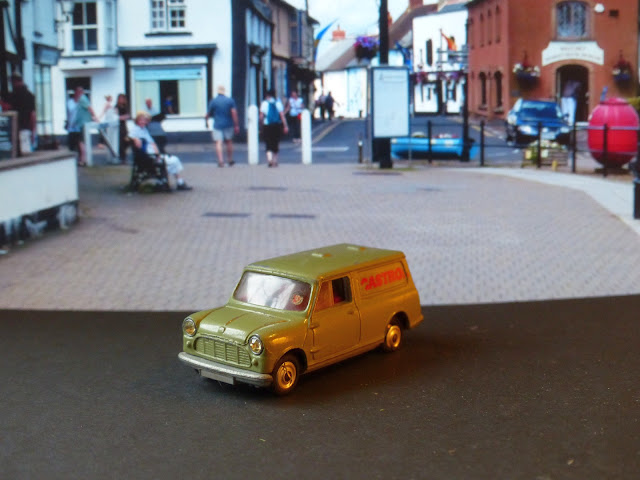 Normally, the grill is all painted and has straight bars and horizontal elements. The ones to look out for are the comparatively scarce grills that have been painted silver and the less easy to find wavy style as made for the Austin Countryman. 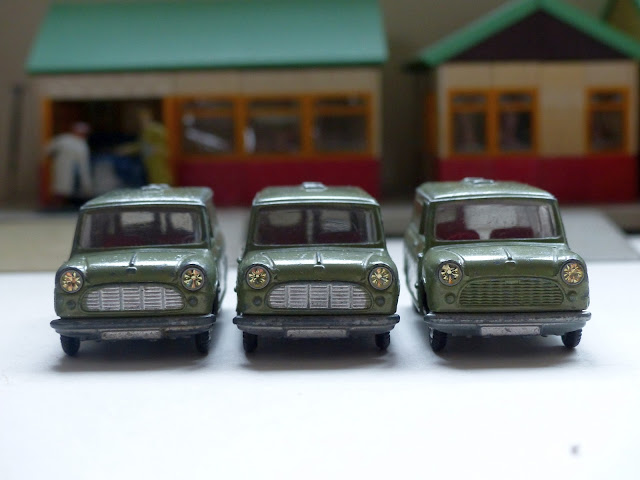 I have been able to get a couple with silver grills, and the paint does look original rather than having been added later by someone. They were quite inexpensive but both have a bent rear door. I have also found a good model with the Countryman style grill but this was probably only affordable by reason of the missing rear door! I think it should be fairly straightforward to fit a door sometime once I have found a very cheap wreck that still has one.

As far as I know, all the Mini Vans have Austin badges. I am still checking almost every one I see, though, just in case there is a Morris somewhere. I believe that there is a Morris version of the #485 'Austin' Countryman so it is not totally impossible.

There is great fun to be had checking the badges on all the Minis, in fact. A little while ago this little blue #226 came up at an auction. A collector friend had spotted the Austin badge on what was supposed to be a Morris Mini-Minor (and which was painted in Morris Mini-Minor pale blue and had Morris Mini-Minor on the base)! We were very hopeful at the time that we might get it for a modest, typical #226 price. 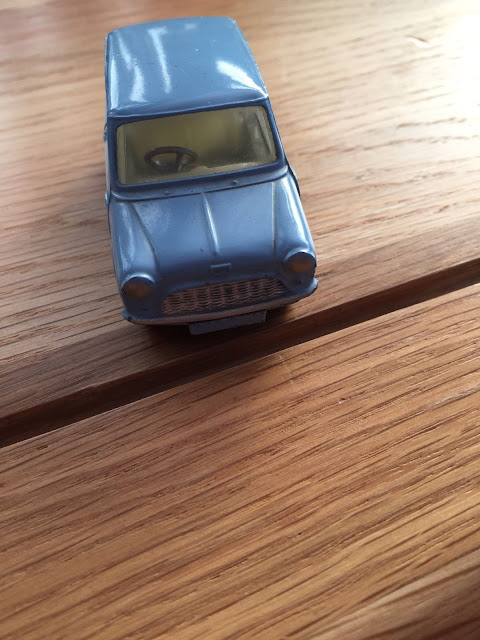 Unfortunately, that was not to be and I have since discovered that many people were watching the bids as they soared past the £120 I had considered paying! 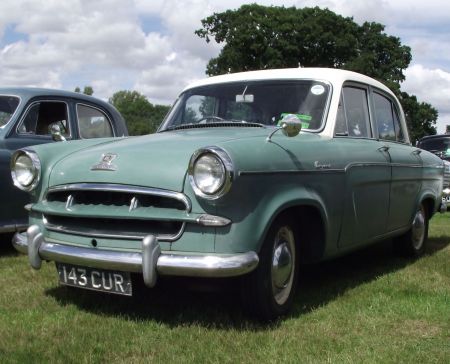 These were not a common sight on our roads at the time. It does bear quite a few similarities at first glance to the Vauxhall Velox and others in that range. 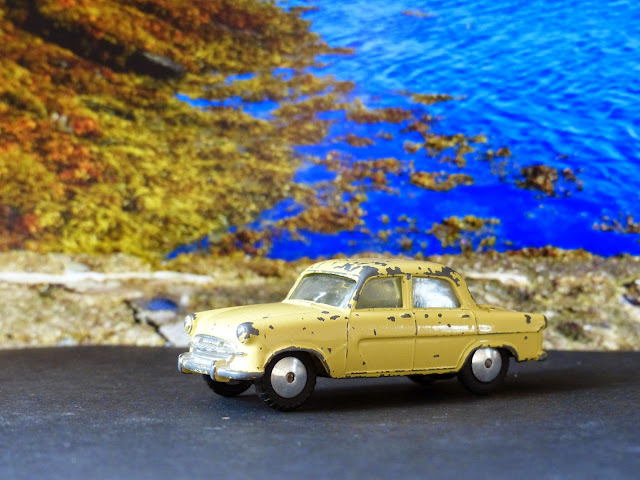 This is the Mechanical 207M, always in a creamy yellow colour. Really quite rare now in decent condition. 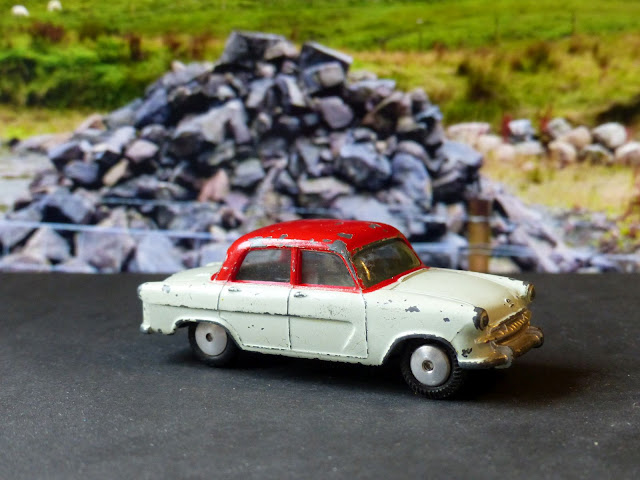 The normal version, 207, was the first with two-tone paintwork and the colours are a very pale green and bright red. You'll find two versions of this: one with the red coming down to the bottom of the window line and a less common one with just a red roof.

There are minor shades of pale green some appearing more like a pea green perhaps but really this model has very few variations. Most differences will have been the result of sunlight fading the colours or, often, someone trying to freshen up the appearance!