The mystery of the blue rear cover 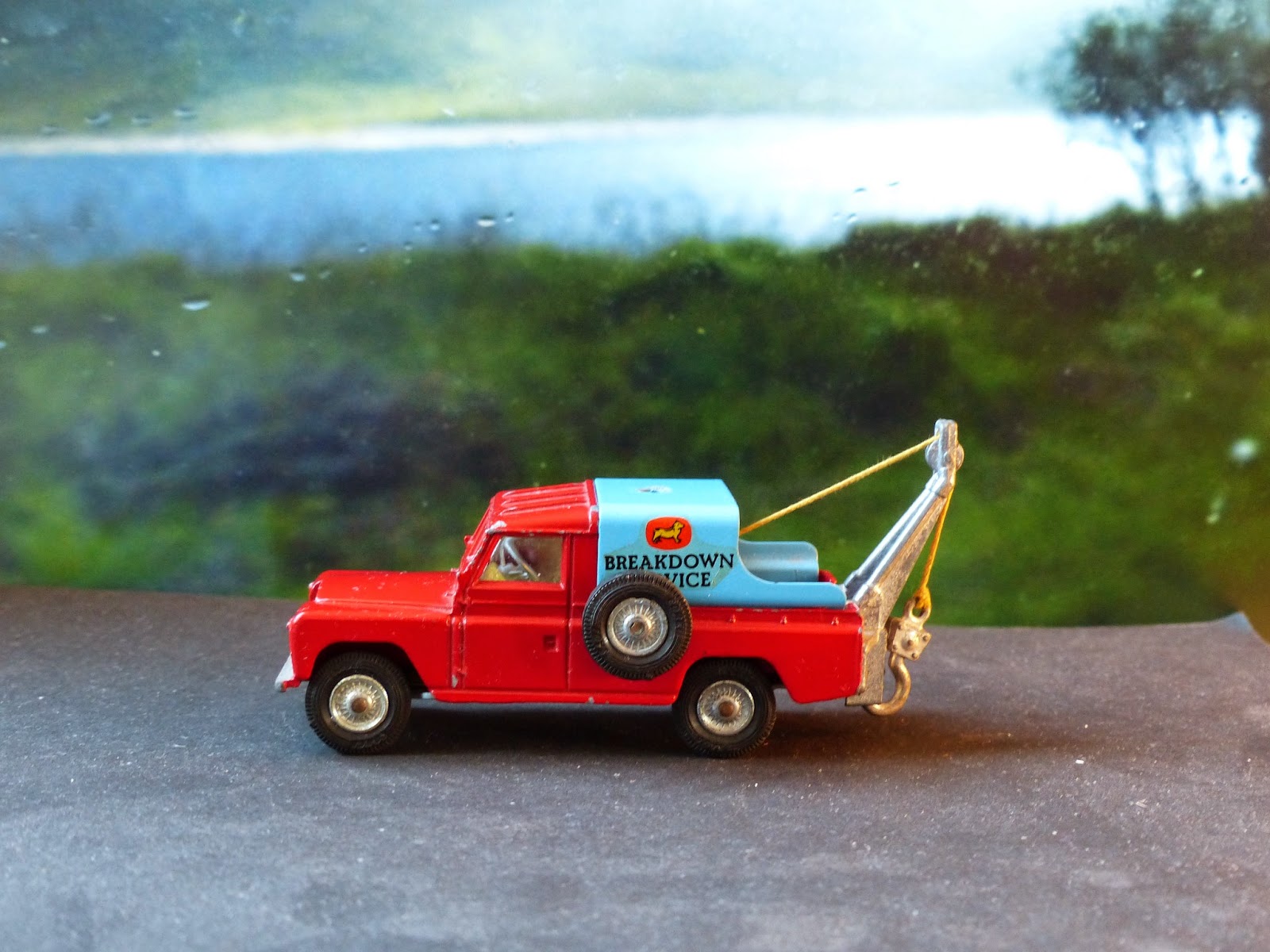 You'll know that I  have already written quite a bit about Land Rovers but the latest addition to my collection deserves a mention. It is odd in a couple of ways. The obvious one is the blue tin rear section. This looks quite 'normal' at first glance and is in a true 'Corgi' shade, very much the same as might have appeared on a Chipperfields Circus model. The thing is - all the other rear sections I have encountered have been yellow! It took me a minute or two to realise that this was more than a bit unusual. I checked hundreds of others for sale and they were all yellow. I looked on all the sites run by people who seem pretty knowledgeable and no-one mentions a blue section anywhere. Even a Google Image search didn't come up with anything.

So this is a bit of a mystery. I am hoping that someone will know something and help - ideally, telling me that it is a colour used for a short period or something like that. I did have to bid quite a bit to get this so there were one or two others who were also intrigued. It wasn't well promoted, though, so could easily have been missed.

The search light is missing. I'll order a replacement for that which looks easy to fix and I shall also need to find a reasonable 417 or 417S model to transfer the cover to as I can't really advertise it like it is. I have to make some effort to get it right, even if I don't know a great deal about it!

Although advertised as #417S the Land Rover has cast wheels and they didn't appear until well after #477 had taken over so it would seem that the blue section comes from something older and just happened to have found its way onto this one at some stage in the last 50 years.

It's about a year since I had that idea of 'doing something with Corgi Toys' which became 'obtaining an example of each model' for a catalogue that I would create and share with the world.

Over that period I think the most remarkable thing that occurred was my inclusion of the Whizzwheels era. I really had intended to stop at around 1970, ending with the Rolls or whatever actually came last with 'normal' wheels or 'Golden Jacks'. Extending the list and collection to all the 1:43 (or thereabouts) scale models brought in a whole lot more. Many simply had to be included because they were the same damn car but with different wheels fitted and a different coat of paint. Others were actually quite attractive where a better design of wheel was used. Instead of being cheap because no-one particularly liked them, most are quite scarce and difficult to find in decent condition, resulting in some quite valuable items in amongst those ubiquitous black plastic wheels!

The other surprise was just how inaccurate many of the 'bible-like' sites that I had been consulting were. That is not to say that a lot of great work had not been done by the various people concerned but quite a few colour variations had not been well documented and I wonder whether maybe too much reliance was placed on that Great Book of Corgi. Putting them all together, though, we do begin to get somewhere near a complete picture and that is what I am trying hard to achieve. I am some way off yet and I know that some shades will be well nigh impossible to find. For example, I have been looking all year for a bronze Chevrolet Sting Ray!

It is interesting to look at just what is still to be tracked down. I have deliberately not yet sought out farm machinery or early racing cars. I am interested in the farm stuff but just haven't got round to that. The early racing cars do look pretty sad to me so I can't see me paying much for these so that is bound to delay getting them! I don't know what it is but they just look awful to me. Then there are several oddities that really do not interest me - commercial items mainly. Ice cream vans, Lucozade trucks, dog groomers and circus equipment can wait.

So here is the 'Wanted' list. In order of probable scarcity, based on production figures where known. [Updated 31 January 2015 and again 31 May 2015 but I've left my comments as they were]

I'm not sure where all the #255s are. They very seldom appear - I guess they all went abroad but I would have expected lots to have come on the market by now. The 509 Porsche is easy to find, I just haven't found one at the right (low) price with its beacon on the side intact and stickers in reasonable order. The Healey, MGA and TR2 and 3 are quite difficult to get in good condition at a modest price. There are plenty if you pay lots but I am not sure why with so many sold. It may be that the screens were very vulnerable and, once broken, have been discarded so the numbers surviving are significantly lower.

Those above the line have had less than 150000 made so are seriously scarce although the Jeep and Bedford CA vans are not fetching much at the moment so I am hoping sellers haven't looked too closely at their models. The M or Mk2 can make a big difference.

Whilst I can find almost all of these today, the prices for many are pretty high, extremely so in some cases, and I prefer to try and find a played-with model at a reasonable price that I can clean up a bit than purchase some shiny example that has been kept in a box all its life and is being sold by a dealer. He must have found it somewhere - and that's where I should be looking! They may well be wonderful examples and well worth the money but I don't need that immaculate one.

So, it will be interesting to see what this list looks like at the end of 2015. I would imagine that the #349 Mini will still be there, as well as the white Rover. There are also some colour variations that I haven't included here - like another white Rover (the #275) and other colours of the Jaguar Mk X #238. I don't know how the total production figures break down for those and there could be quite a lot more added if they were to be taken into account. Things like a Kingfisher blue Chrysler Imperial, for instance, I think are going to be really difficult to find. And that bronze Sting Ray. 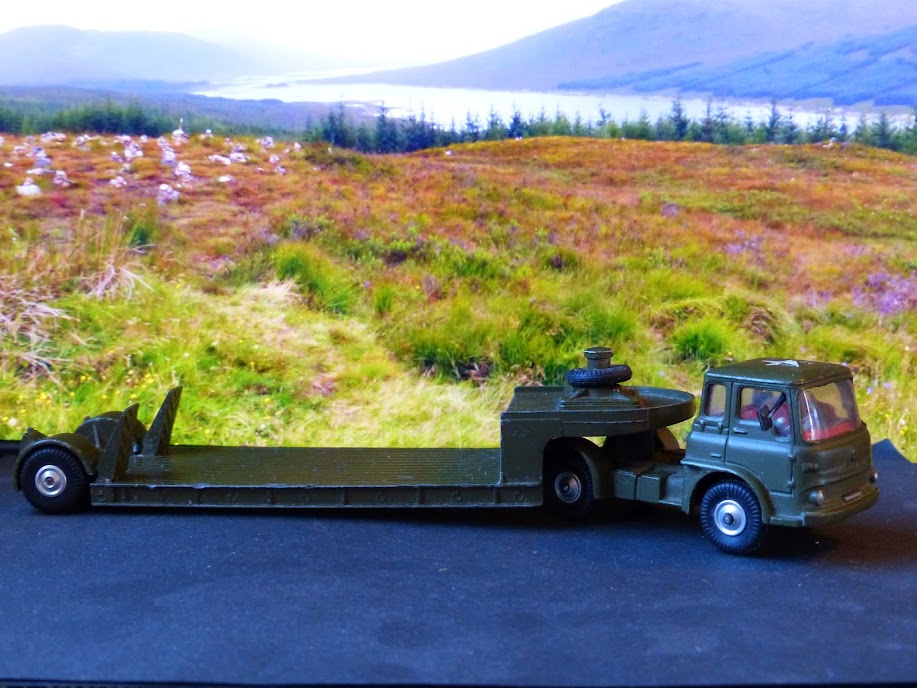 This appeared in an auction and I had to look twice as I don't remember having seen one other in the 1965 catalogue. According to the lists, only 28000 of these were produced which puts it amongst the top few scarce items. The US Army items generally have low production numbers. I suppose by the later 1960s we were influenced more positively by protests against war and news from Vietnam never looked good so spending money on US Army models wasn't something that many parents would have done.

Bedford's articulated lorry is called a Heavy Machinery Carrier for #1135, with dark khaki paint covering virtually everything that had been Corgi blue, Corgi yellow or silver before when it was in civilian clothing. My example is in excellent condition - the rear axle comes off as it should and there are Army numbers on the mudguards, the white star is intact on the roof.

The production people would have put a red interior in the Army version and a lemon one in the normal version. It seems that there are both colours for the Army one, presumably when someone either ran out of red or made a mistake.

Apart from some other Major models, which I am not too bothered about getting, I think that completes now my US Army collection. They are all quite difficult to find these days. I have them advertised on the main site and some available on Ebay but none are particularly cheap so may be around for a while yet.

The last one in was the Miltary Police Commer van, using the same detachable rear section as others and with the same operating unit as the dark blue Police van #464. 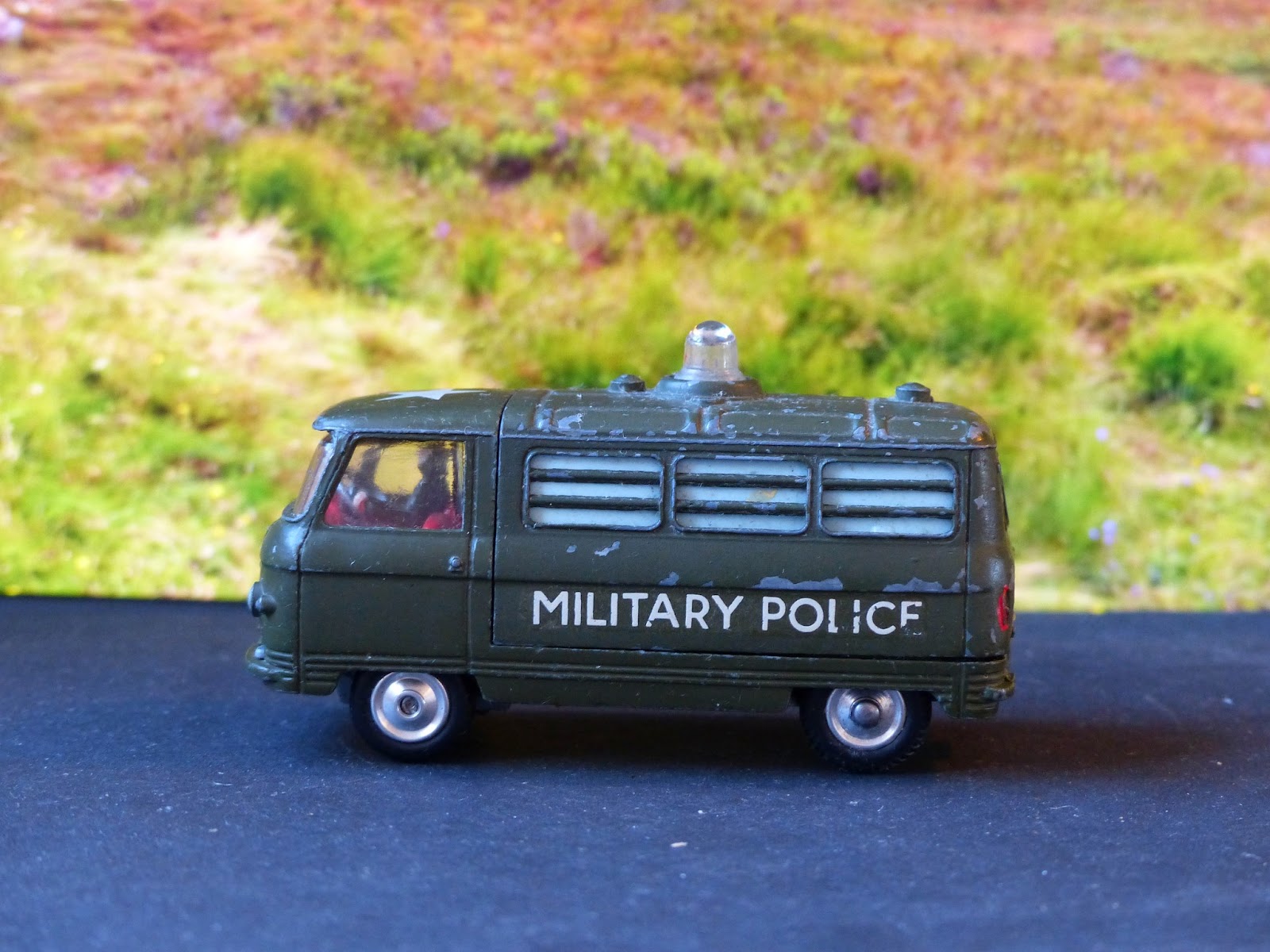 There are several Land Rovers - some have red seats and some lemon. There are dark khaki and a much paler shade and different colour canopies amongst them all. I still don't know which is #500 and which is #357! I really do think that there may end up being no difference at all. It will be simply that #500 was allocated originally to the small number exported to the States in that 'no picture' box and then, when Corgi reckoned there may be a bit more demand here, they made it #357 and called it a Weapons Carrier and made a proper box too. 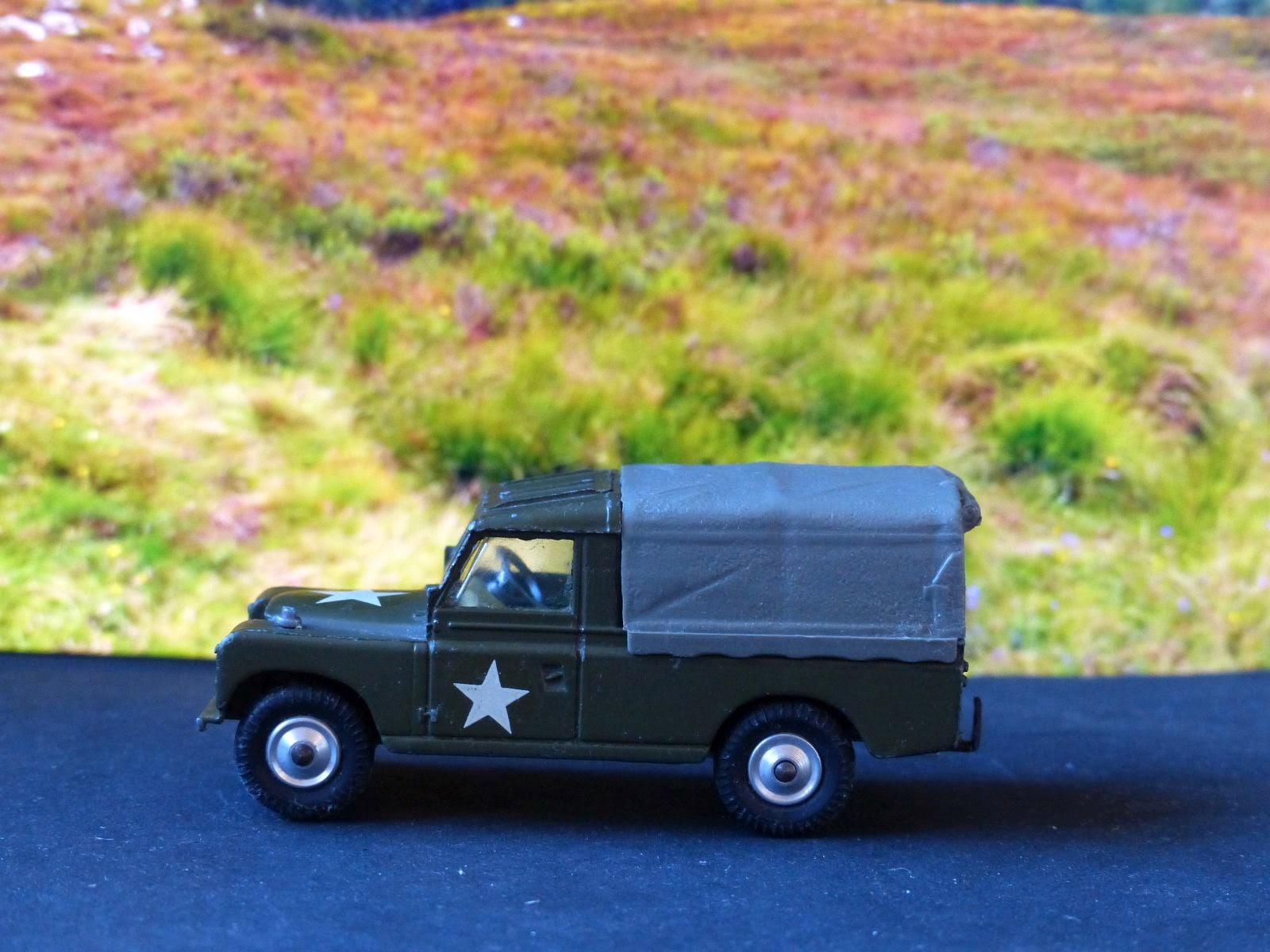 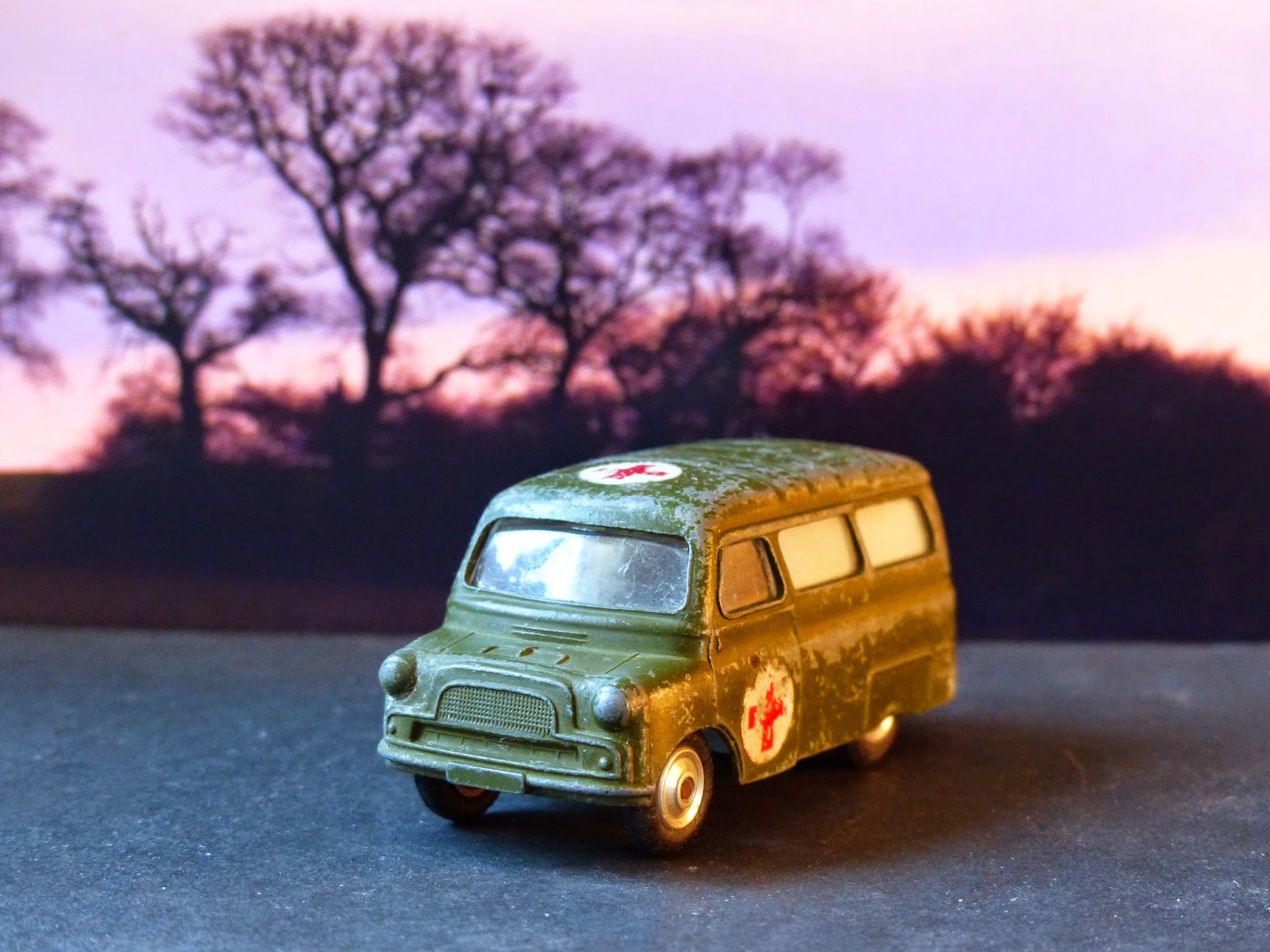 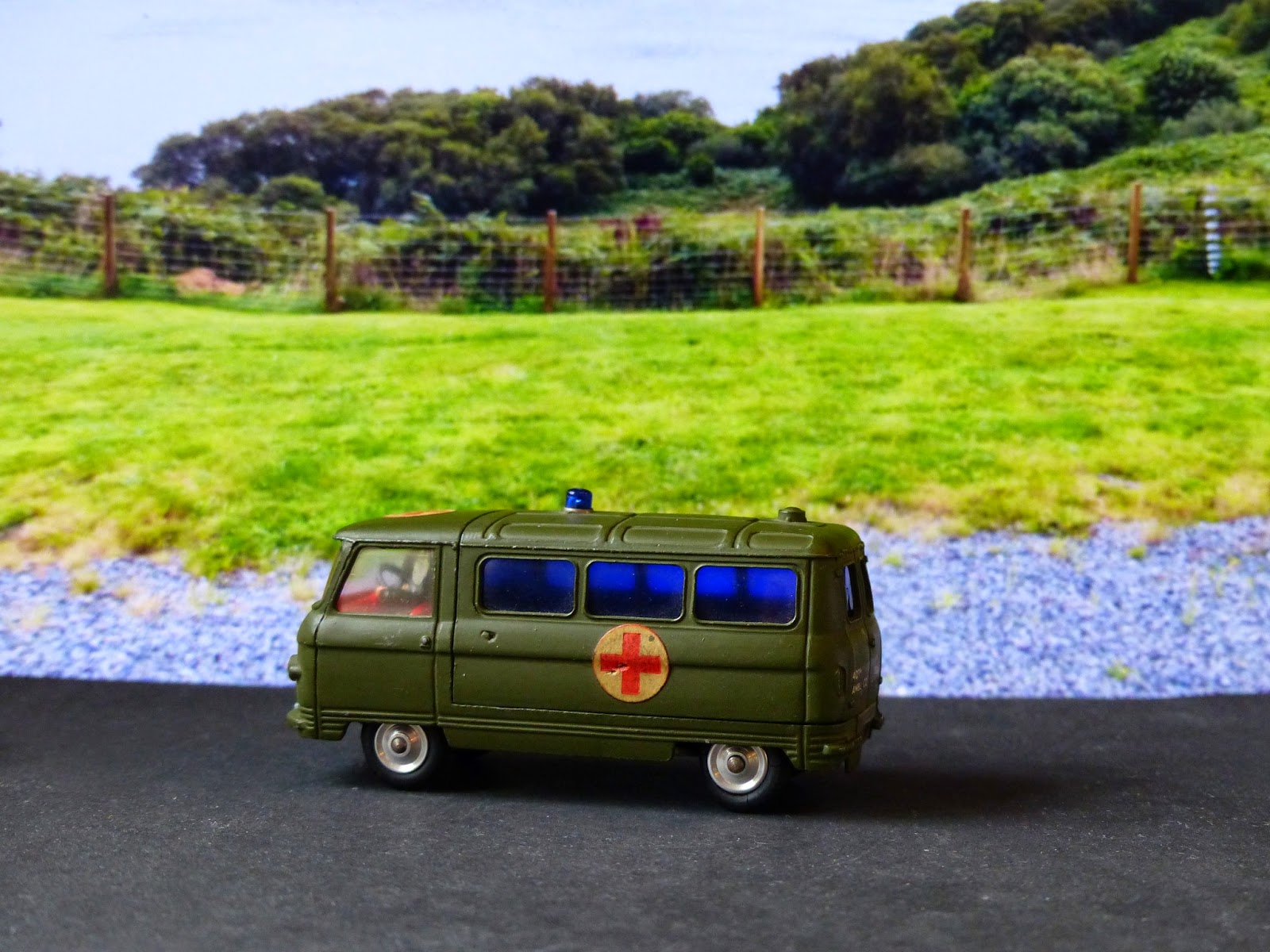 Another Commer base put to good use for the Military Ambulance. 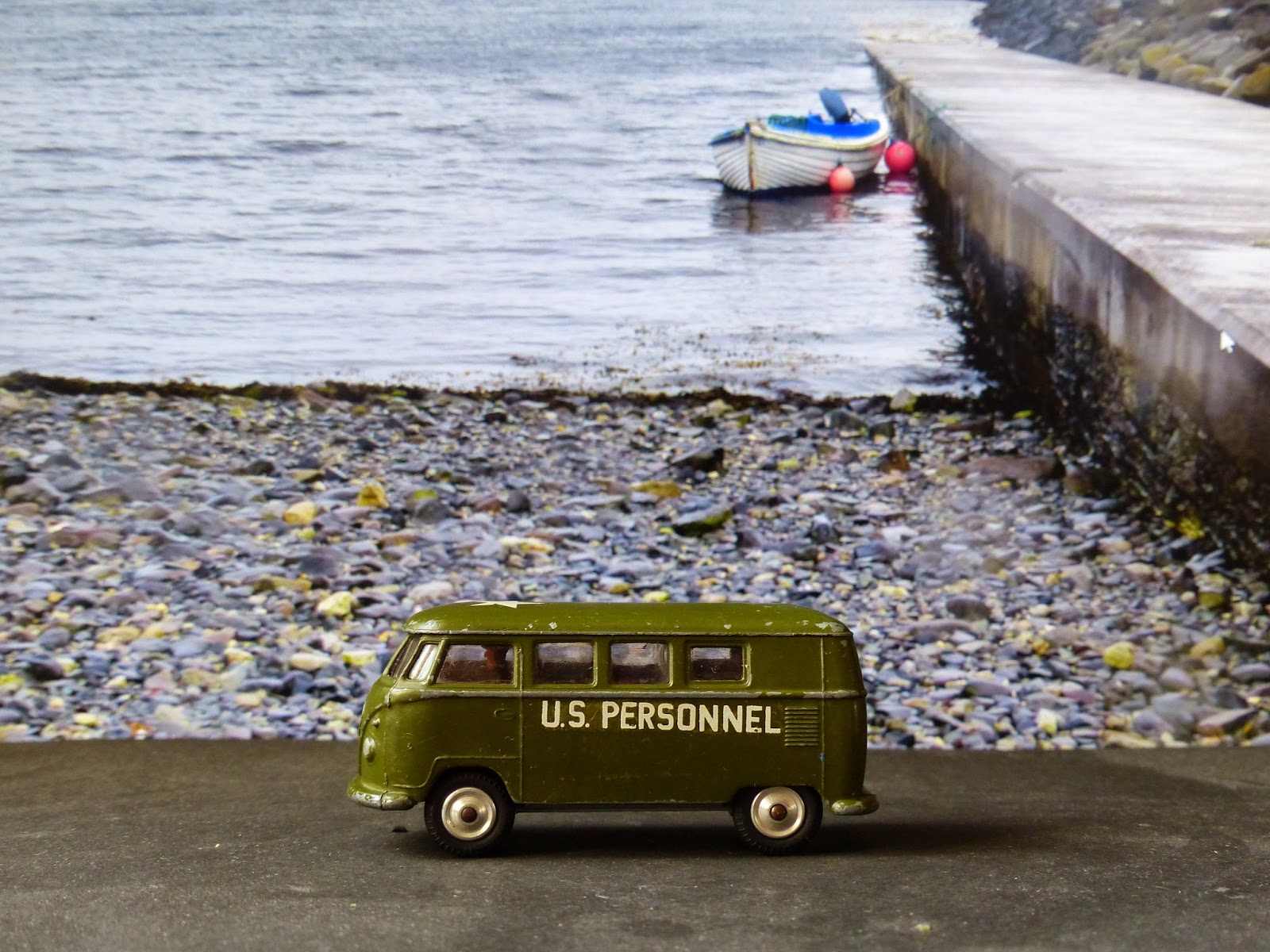 VW get a chance to be featured for the US Army personnel Carrier, based on their Dormobile. 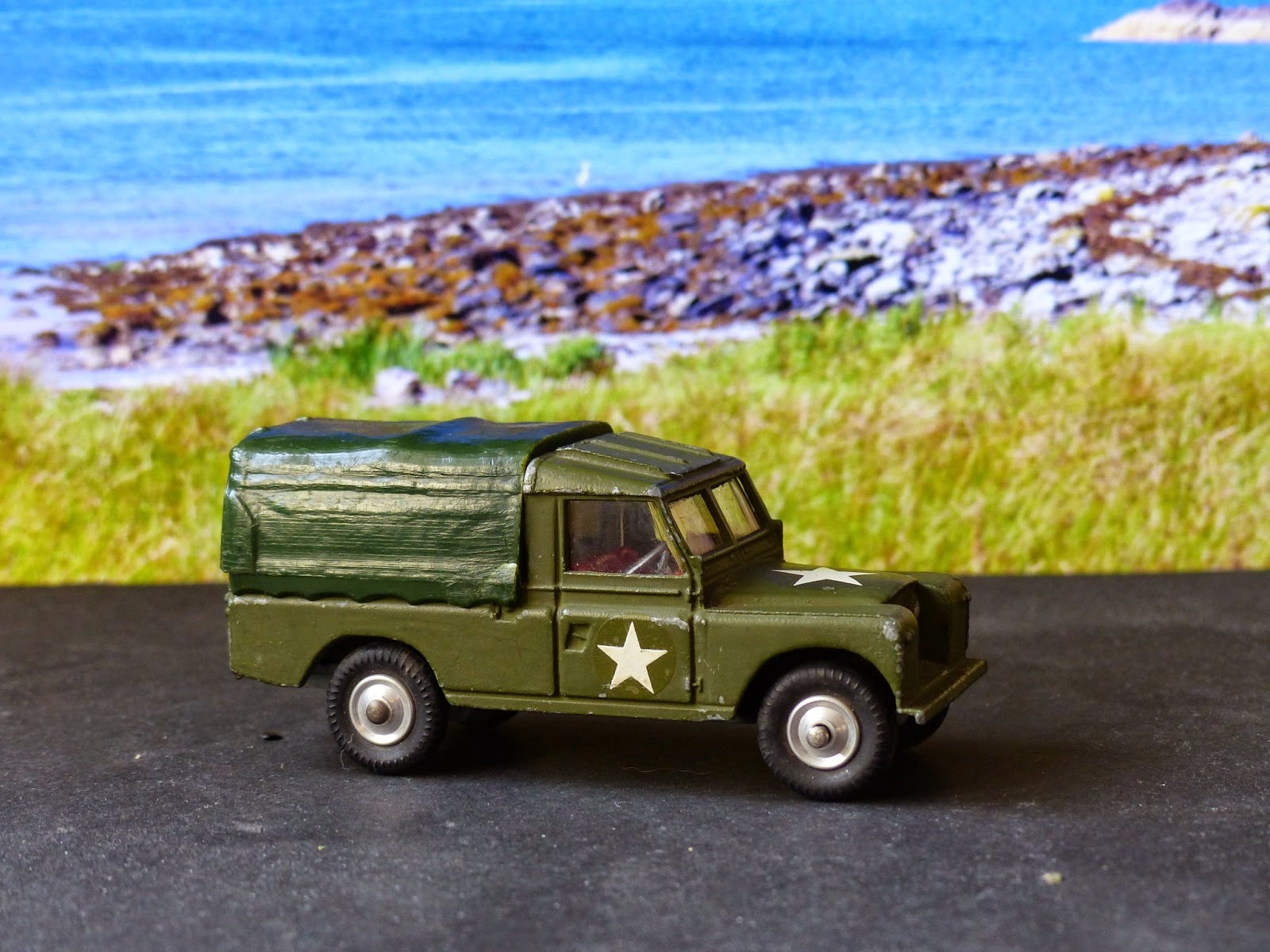 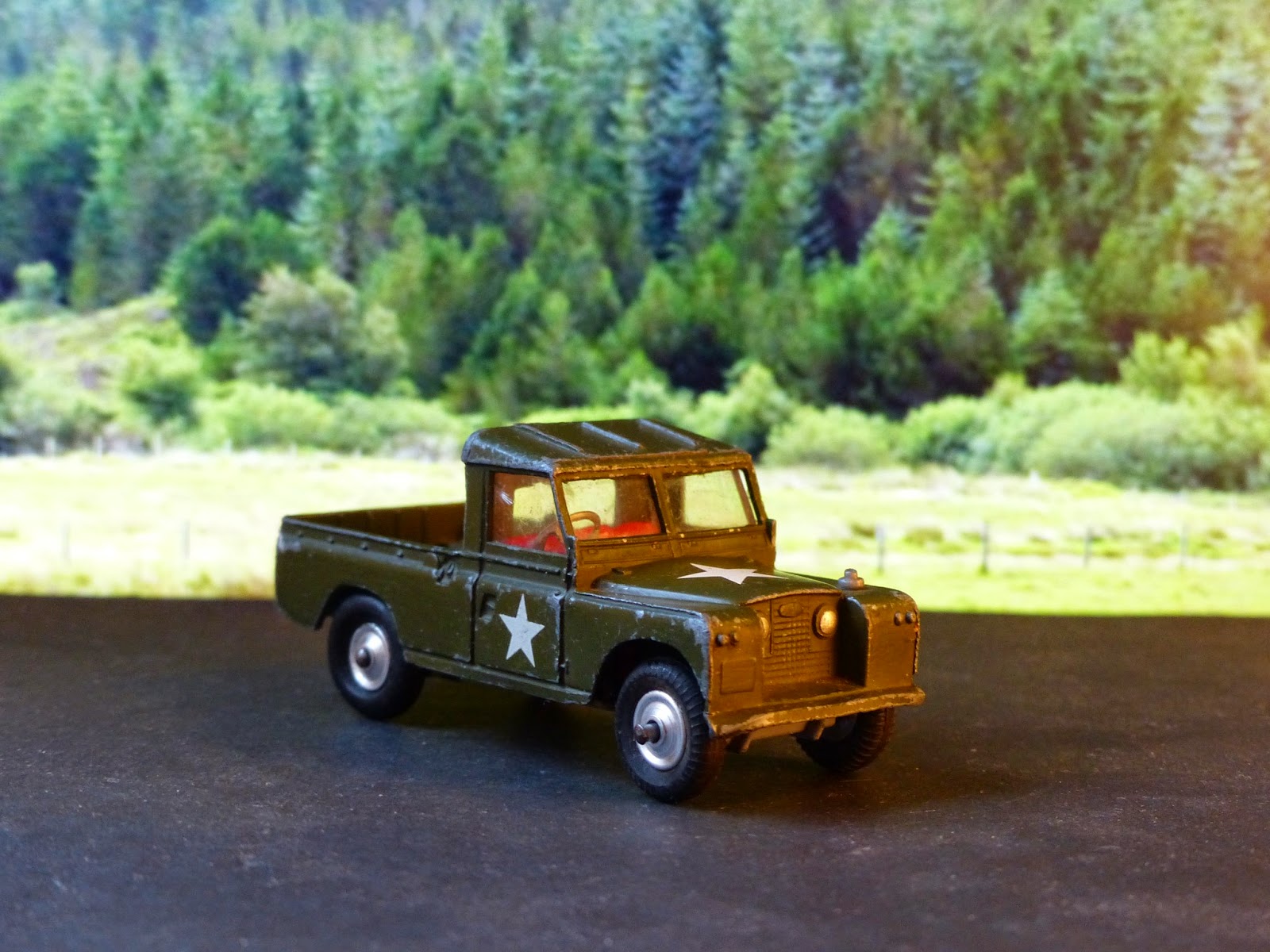 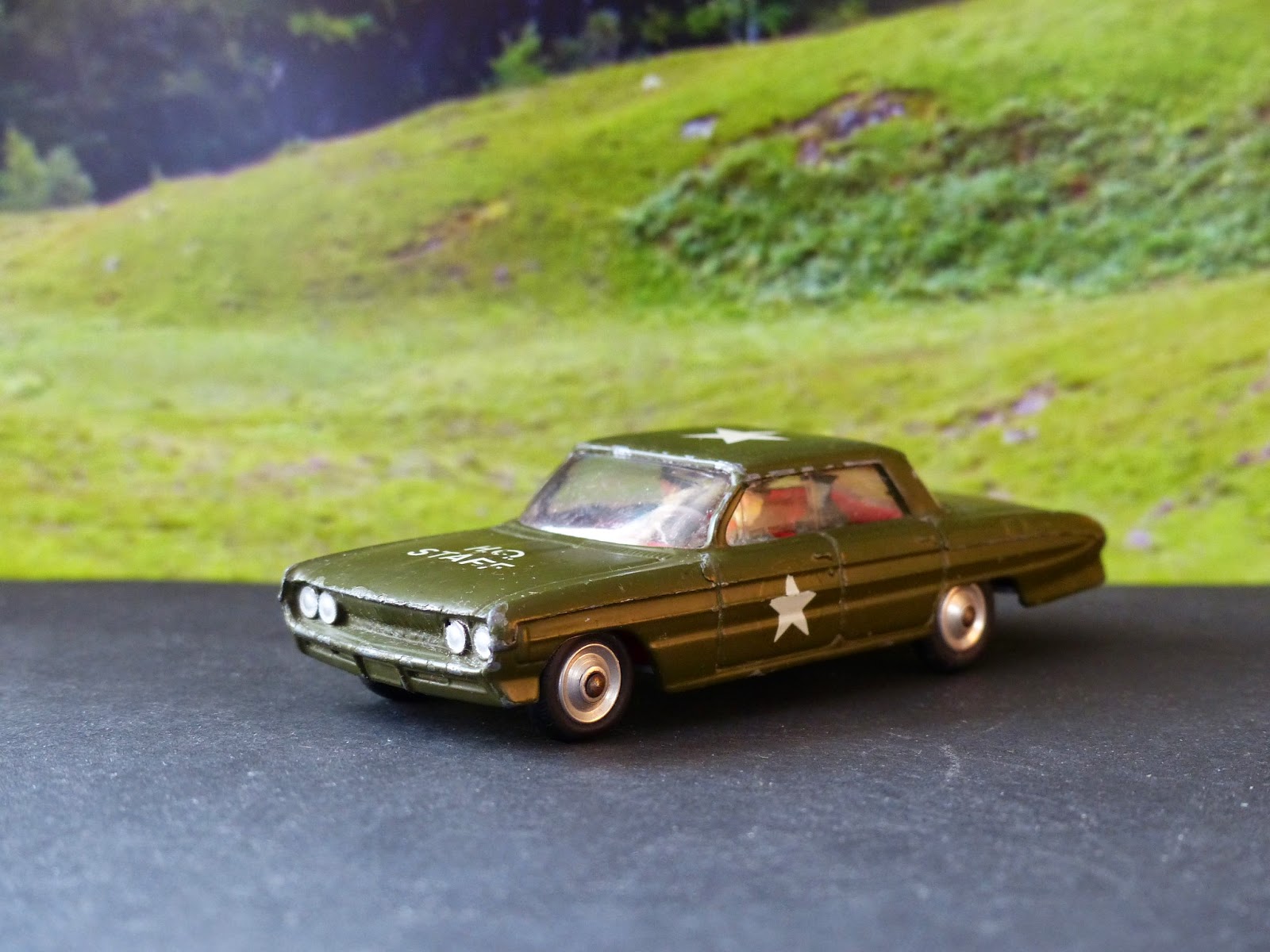 The nice Oldsmobile Super 88 in this, its third appearance, the other two being as the saloon and Police vehicle. (There's also the Man From Uncle car, I suppose!) 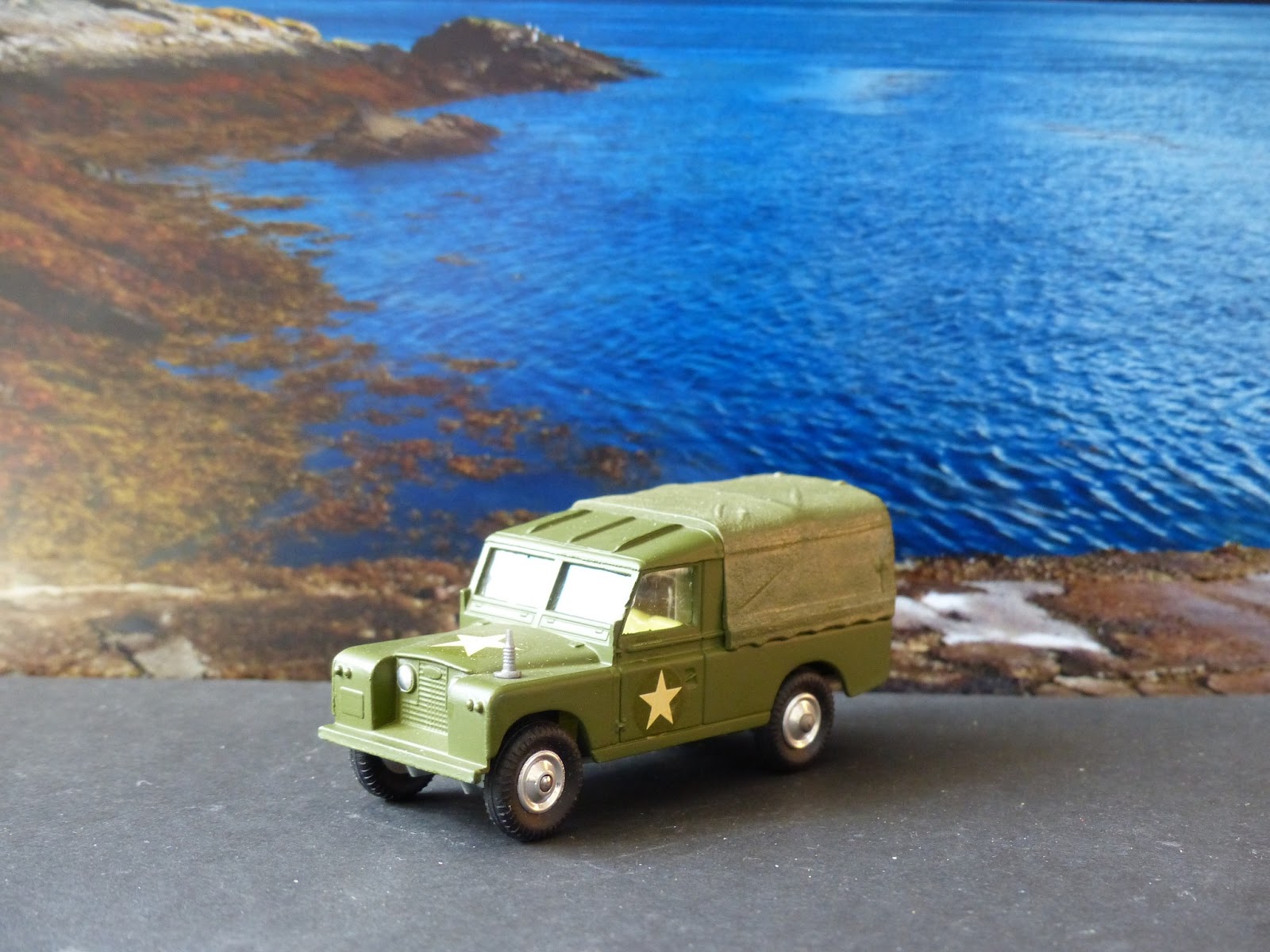 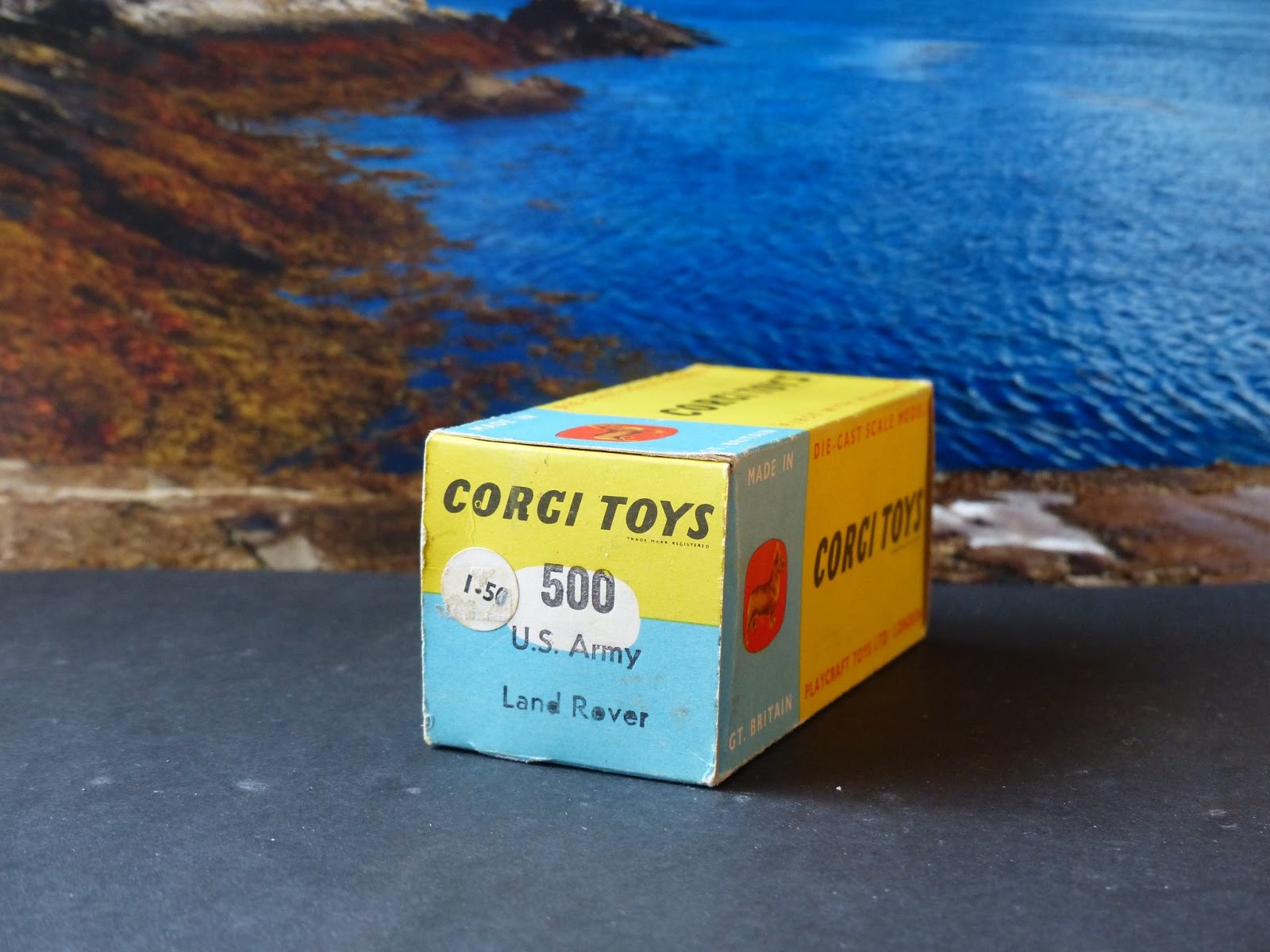 The original 'no picture' box for #500 is worth a great deal and not for sale just yet! 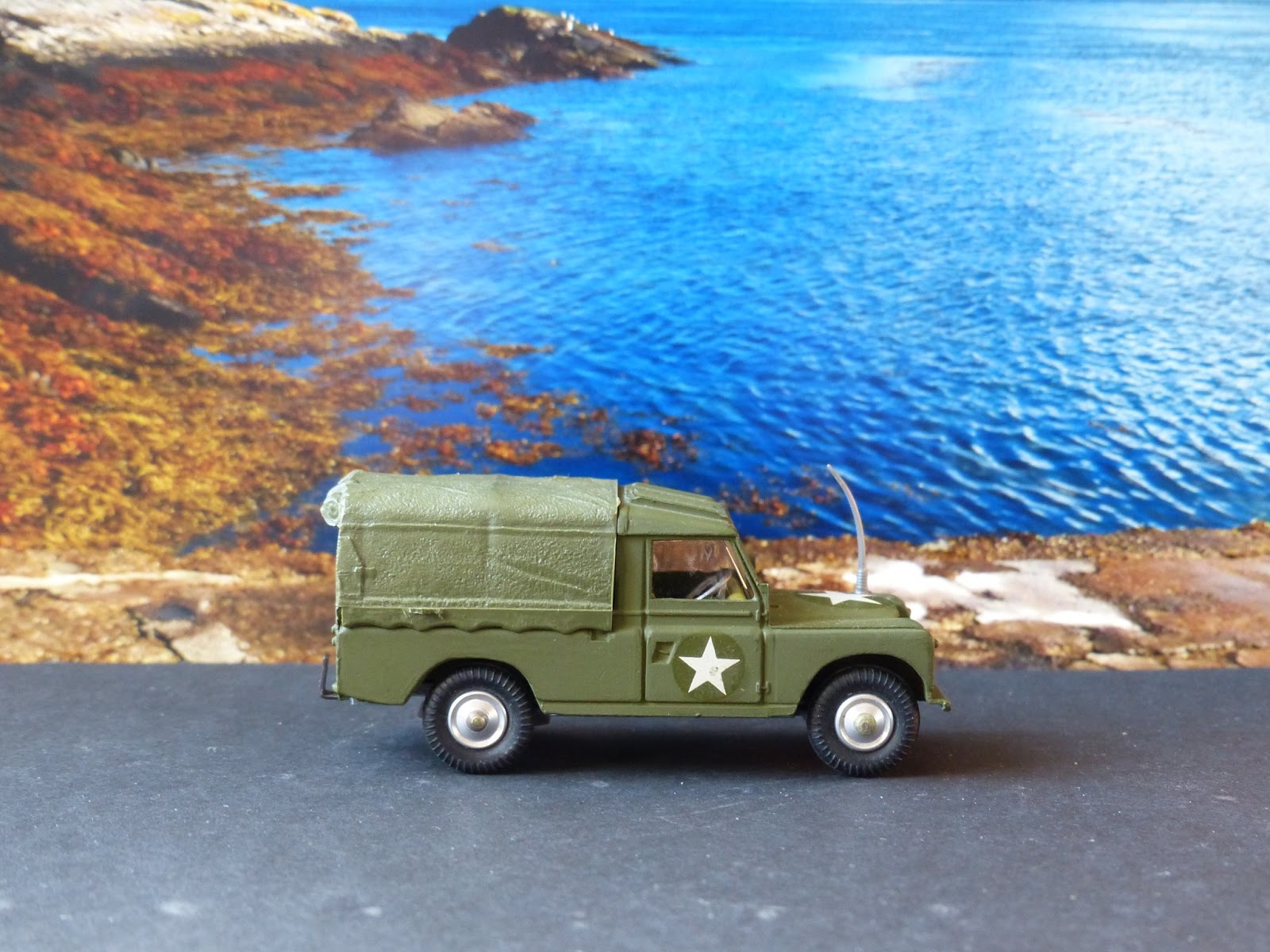 Its later and seemingly identical model #357 with an excellent original box are also pretty highly priced. The window looks open in this photograph. 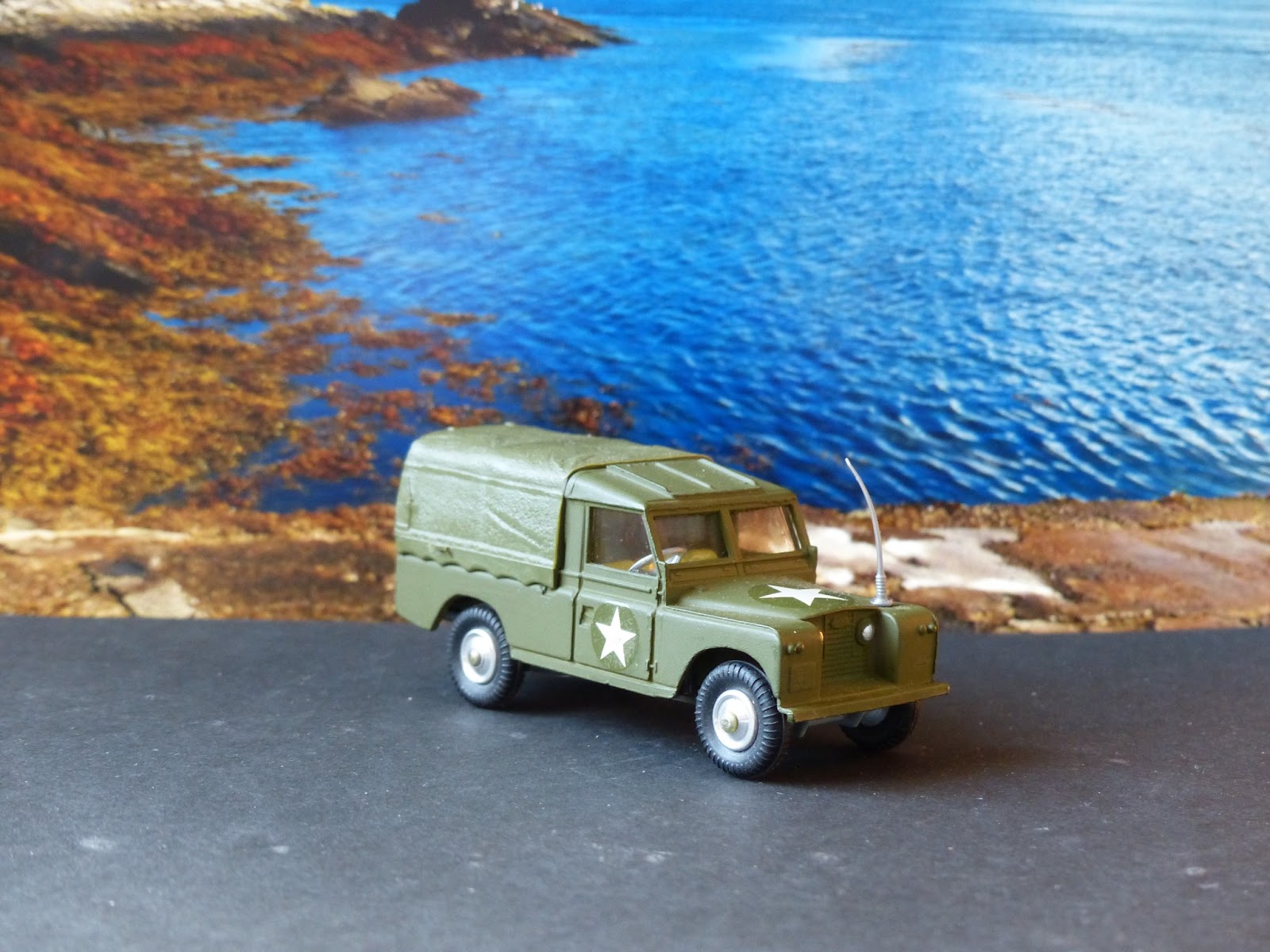 The window is there, after all, as this photo of the same model confirms. Nice to have such clear glass still after 50 years. 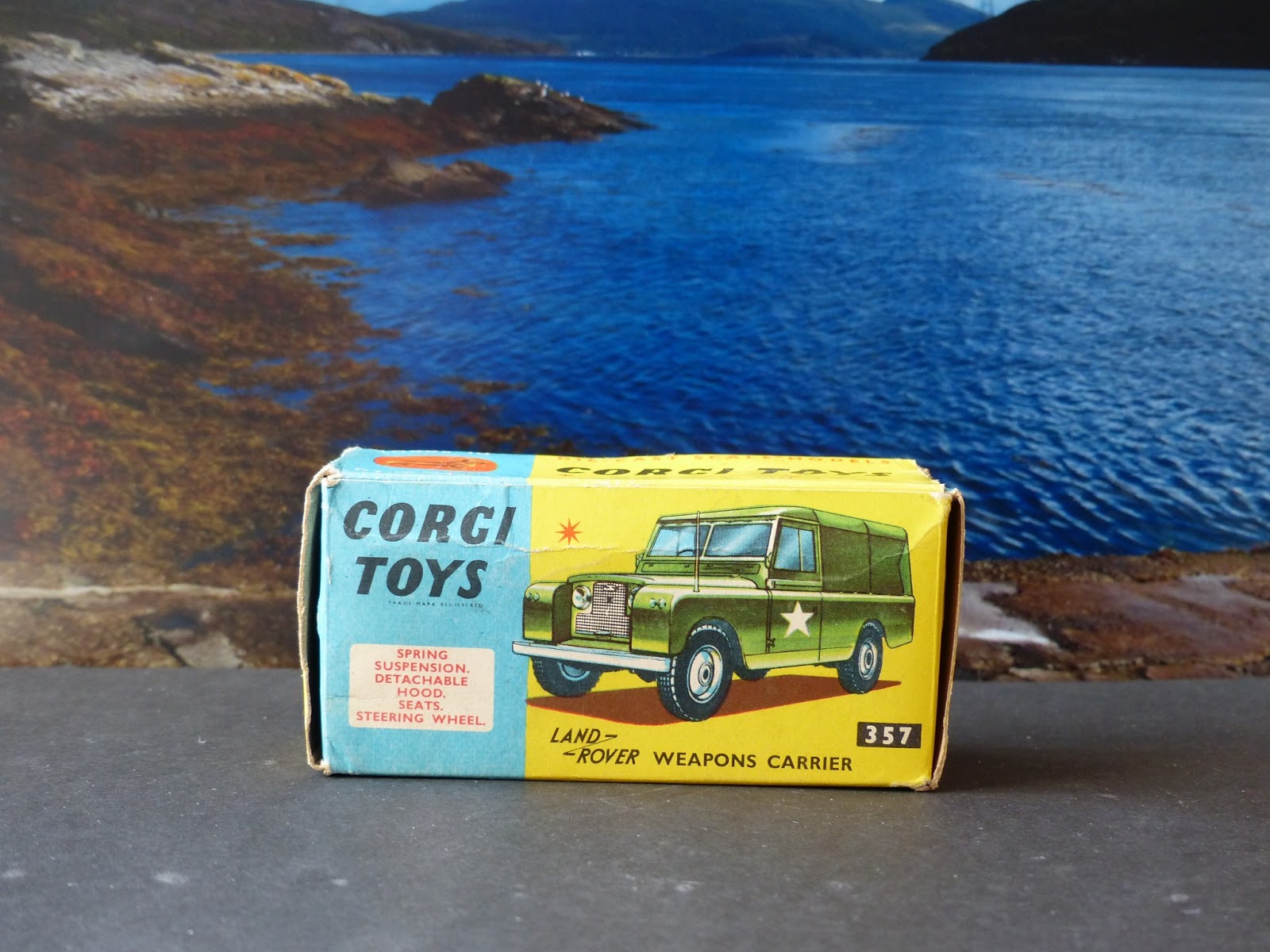