An unusual Buick Riviera - with gold grille and bumpers 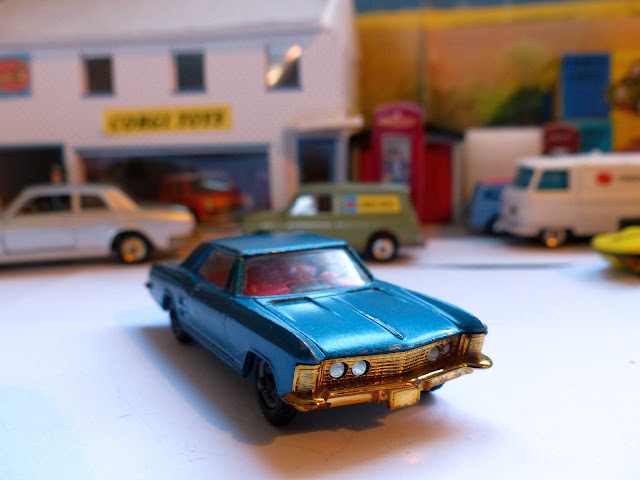 Here is an interesting addition to my collection for 2022. The 245 Buick Riviera in a splendid shade of dark metallic blue with gold 'chrome' at the front and back. 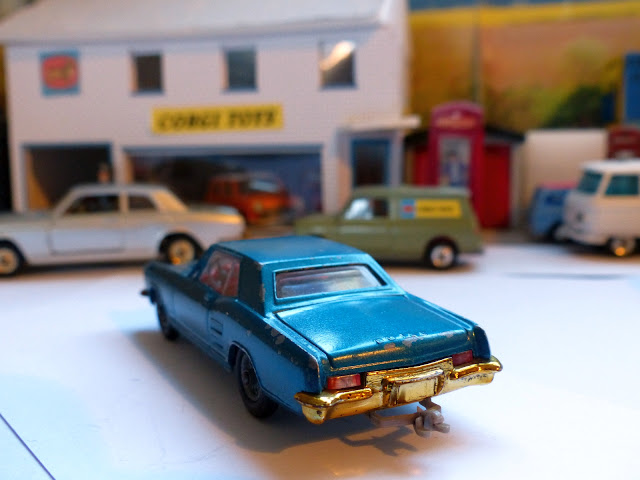 It appears to be an early edition with the 'grab' type of hook. It arrived with the later type of tyre - the post-1967 type with Corgi branding and in line tread - but they clearly cannot have been right so I replaced them with original 'normal' tyres of the right era. 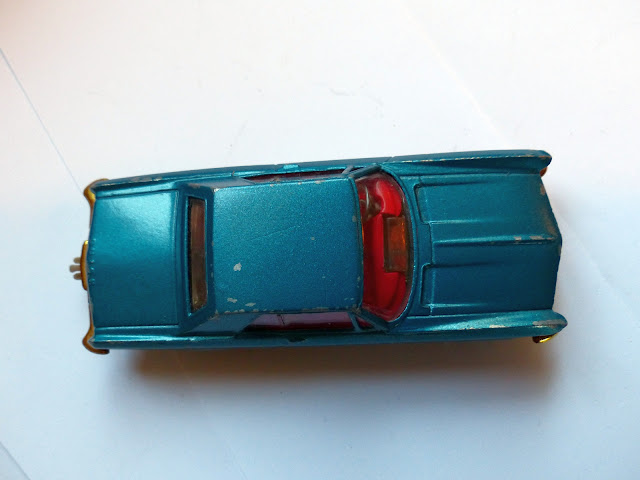 The paint is quite thin but not greatly different to the metallic blue and gold that were the norm (the pale solid blue shade being rather thicker). It is not a coat that someone has added on top of another colour as the photo below shows, so this is either original or the base has been very cleverly refitted with no sign of damage to the rivets or where they might have been removed. The paint does, however, blur the definition of the Riviera motifs on the wings. 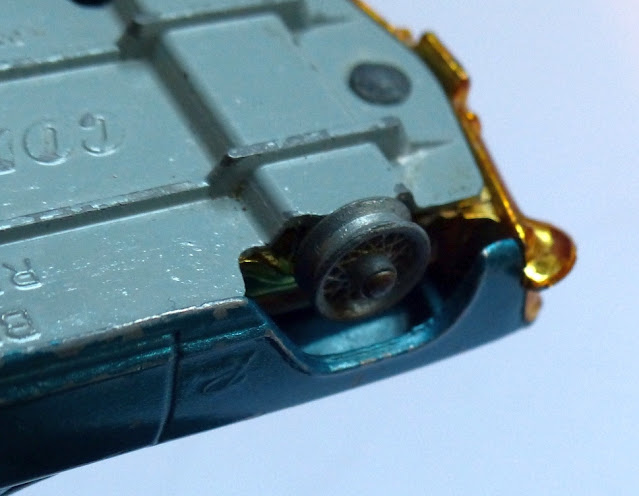 So this is a bit of a mystery and the first  I have ever seen with gold front and back. It is conceivable that someone has gold plated the original chrome pieces - or maybe gold pieces were available to buy as new parts - and somehow taken it all to bits and rebuilt it but this has been played with and people who make such smart rebuilds tend to look after them, as does whoever subsequently buys them. I am more inclined to the view that this is a production sample when colour schemes and, indeed, gold-plating may have been options on the table for the 245. Gold plating was not to be and the paint on this sample not suitable so it gets rejected.
It then gets taken home by someone at some point and a Corgi chap's child gets to play with it, eventually coming up for sale with a bundle of other Corgis. The seller had no knowledge of its past, just a random collection bought.
I am happy to have this and expect it to stay in my display cabinet for many years before I learn any more about it!
Posted by Andrew Hill at 18:12 No comments:

The most recent release in their excellent series of Corgi reproductions is the 215S Ford Thunderbird, the Open Top edition with suspension and a driver. 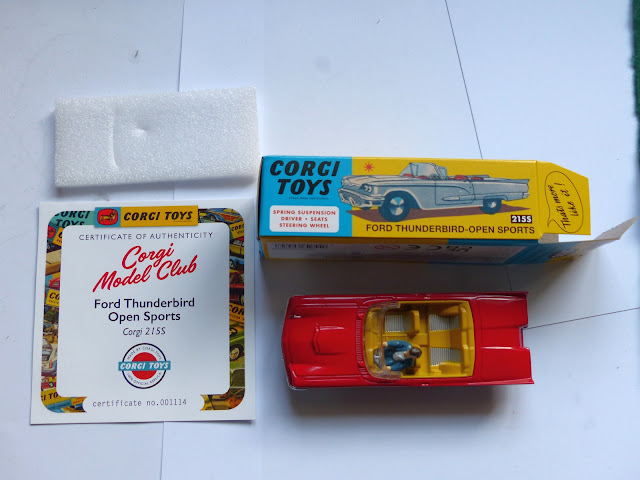 In the same size box as the original a piece of polystyrene protects the screen and driver's head. This is particularly useful as I have always found the driver to be a bit ridiculous, being way too tall, as well as looking very much like the character who would be chopped down to Roger Moore in The Saint's car three years later. I may be wrong there. Maybe he re-appears in the Mercedes 300SL. But that's all another story. So here, nearly 60 years later, is a fine and remarkably accurate reproduction of the car. 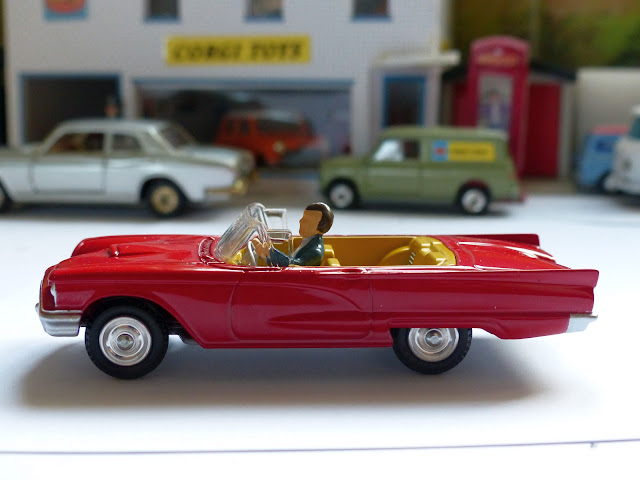 The original 215S I had always thought sat a little too high. The 215 was as it should be. I presume the requirements for suspension movement meant the height had to be increased. Here's a fairly similar vintage sitting in the village just around the corner from me. 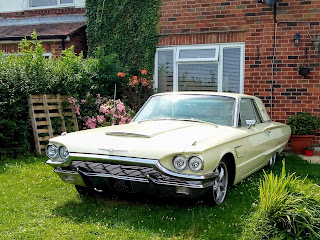 The model itself has a lovely coat or two of the right colour red and the silver paint has been very well copied, being a strong feature on the original. Perhaps the detailing is a little too precise on the headlamps and at the back end but that's hardly a criticism. 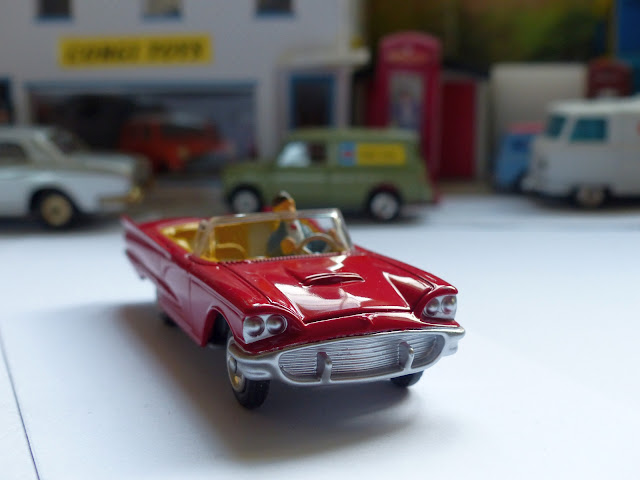 The interior is just as ghastly as the original, and you still have to wonder where passengers put their legs. The colour is perhaps a little darker, more brown than the 1962 issue. The screen is very accurate. 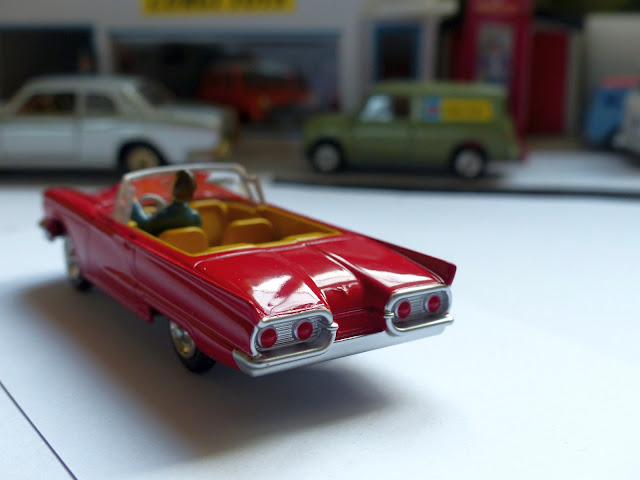 The only thing that struck me as a little odd when I first took it out of the box was the wheel design. As these were supposed to be just the normal shaped wheels they'd produced very nicely on several preceding issues, I was surprised that these seemed slightly different. From some angles they're pretty near perfect but from others they look wrong. 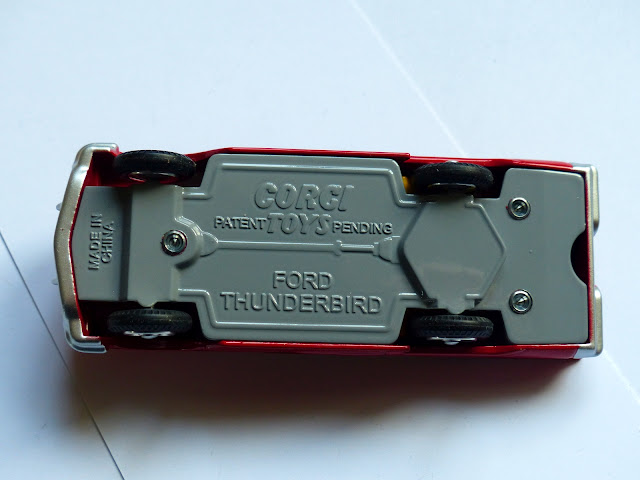 The base is nicely very similar to the original with just the reference to China instead of Gt. Britain. The box has been well done. I think the font for the model title is slightly wrong and the box has that bright finish which is unnatural but really this is a very good effort. 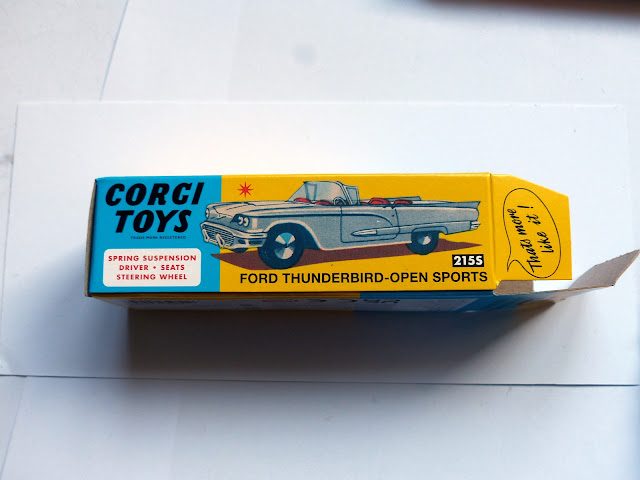 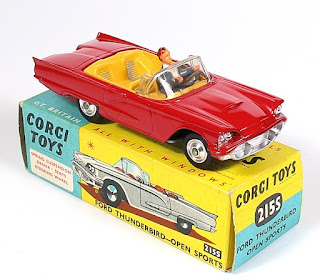 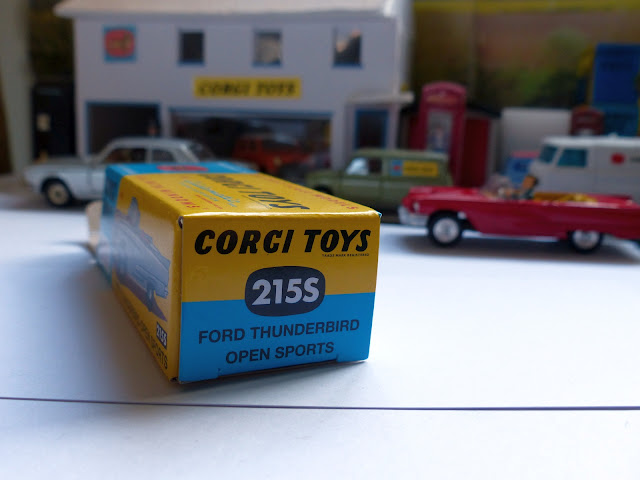 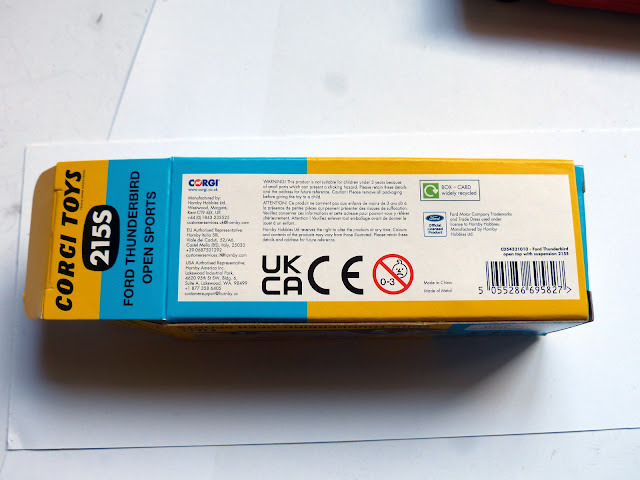 All in all, this may not be my favourite Corgi but I am still delighted to have this in my collection and I have to congratulate the good people at Blue DTC Brands, whoever they are, for their efforts once more. This series is proving a huge success and all just as collectible and exciting to look forward to as the originals.
Posted by Andrew Hill at 15:19 No comments: 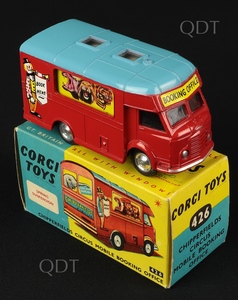 Corgi dug out the old Karrier cast and tweaked it to produce some more income from fans of Chipperfields Circus models. This came with smooth fixed wheels on the early models but soon afterwards the shaped fixed variety were put on and these are by far the more common. 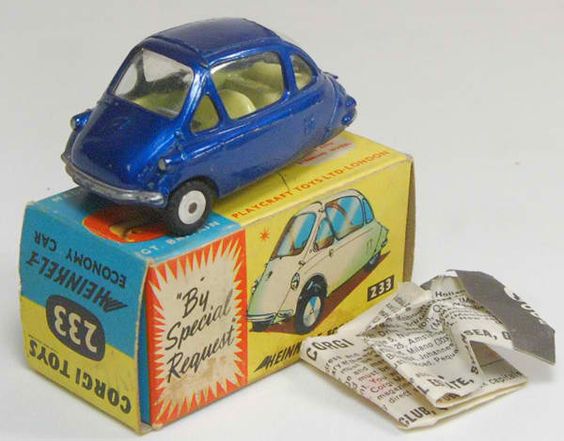 The other item to appear early in 1962 was the Heinkel Trojan 'Economy Car', better known to most of us as a Bubble Car!
This came in all sorts of colours from, as far as I can tell, the very start, including orange, deep red, bright red, pale pink, deeper lilac-pink, metallic blue and a scarcer metallic peacock blue. Early issues had very small fixed smooth wheels and these remained the norm until much later in the day when small cast wheels were used. Apart, possibly, from some trailers this is the only model featuring these very small wheels in either form.
Neither of the January 1962 models had any special features other than suspension. The Karrier still lacked an interior! The Heinkel had either a lemon or red plastic interior and I am not aware of any variations. The pink had the red interior and the others had lemon.
There appear to be two shades of red for the Karrier - a brick red and a deeper red. The deeper shade is more like the usual Chipperfields colour and the brick red is a little less common but not particularly scarce.
It is quite extraordinary to see what is essentially the very ancient Mobile Shop model with the painted metal display inside still going in 1962 with only suspension added. This would be on the shelves as this month's 'new' model with items like the Bentley Continental and other far better featured models now older issues. I suspect that, if there hadn't been people wanting to collect all the Circus models, this would not have sold at all well. I don't believe it made it through to get free-spinning shaped wheels, being withdrawn in 1964.
You really would not want to change the tyre on the single wheel of the Heinkel so do watch out when buying this model!
Posted by Andrew Hill at 08:00 No comments: