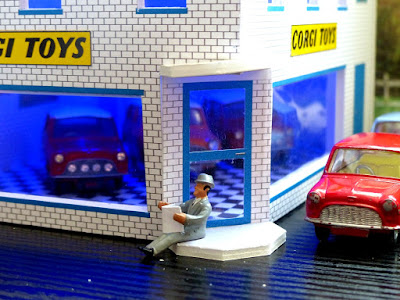 Steed's reading a newspaper outside a new showroom I have just put together. The parts come from GP-Miniatures and Mr Poulton does a first class job at a reasonable price. It was time for the Bayko to be returned to its box before daylight faded the colours of the marvellous 1960s bricks, windows and roofs that I have had since a child. 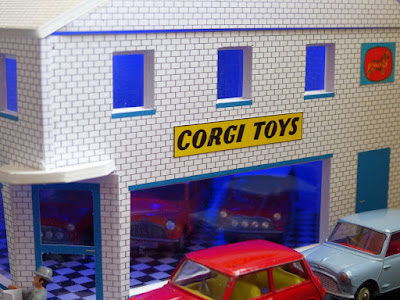 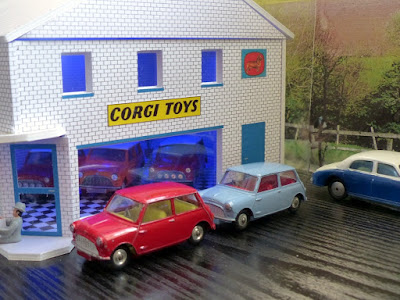 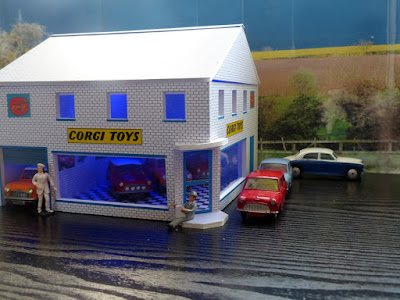 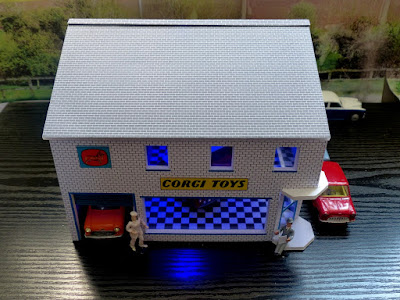 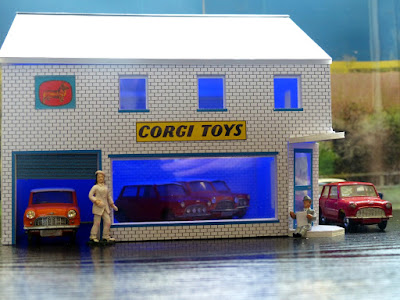 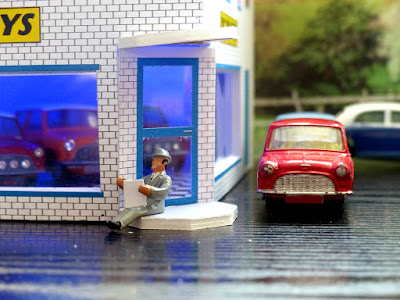 The interior lighting is my own addition. In the pack you'll get simply a bundle of printed thick paper sheets stuck on squishy polystyrene-like board, a few pieces of thin clear plastic for the windows and the signs. Construction is pretty straightforward. I finished up with glue all over the place and did make a couple of mistakes, one of which Mrs Peel is conveniently placed to disguise.

If you are careful, though, and try making a pinned together model first you will get there in a fairly short space of time. It will also be rather less expensive than any of the original Corgi buildings!

I do wish I had adjusted the track of the Austin Seven before taking the photos, though! 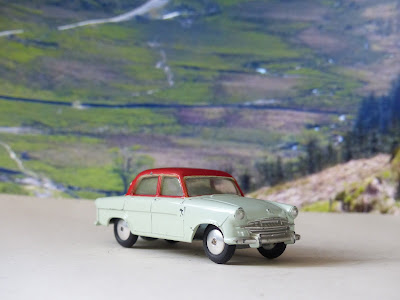 The Standard Vanguard III was issued in 1957. You could have two finishes initially: a very pale green with a red roof or yellow for the M version with a friction motor. There are more variations, though, to look out for in this range which many will have thought was just the three models, including the 352 RAF Staff Car edition. 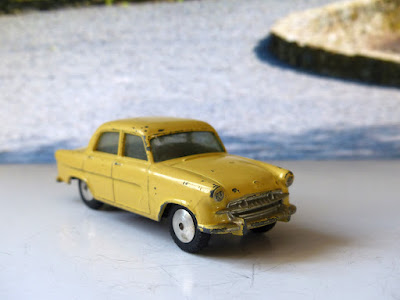 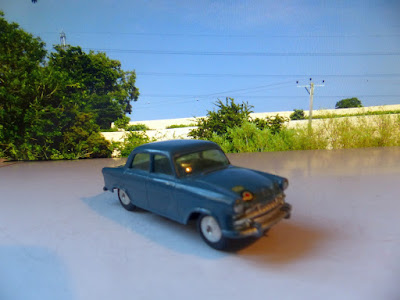 The first thing to look for are the 207 models with shaped wheels. Still fixed, though. These are not uncommon although definitely scarcer. These can, I think, also be identified by the extent of the red paint on the roof. Whereas before the paint covered the pillars as well, the later edition has just the roof painted red. Now, whether there are smooth wheel editions with the red roof only or shaped wheels with red pillars I don't know! I suppose either may be possible but they would be quite a find. 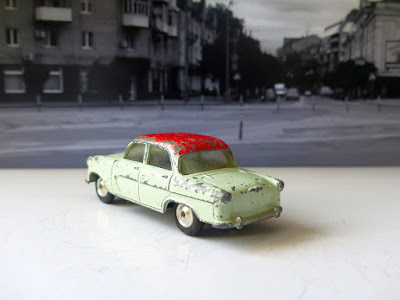 The second thing you need to do is look at the base of the cars. The 207 started with a black base in the thicker style rather than the thin metal of most others issued previously. It has the rear axle differential bulge, but not the same as the bulge for the gear on the 207M. The words British and made appear either side of TOYS and there is no text on the 207 front axle section. The 207M has patent pending  on the front axle section. 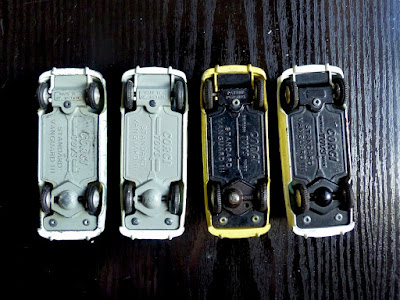 Still with smooth wheels, the 207 gets a grey base later in production. The British made text has gone with Made in Gt. Britain now on the front axle section. This text carries on through the introctsion of shaped wheels. 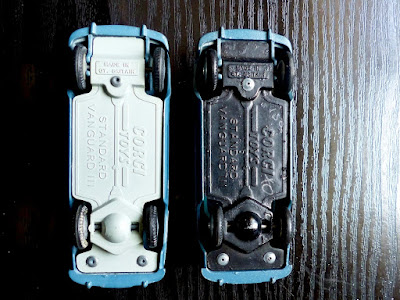 The 352 RAF Staff Car has yet another variation. Early issues in 1958 have a black base but with the same text layout as the grey base on the 207 and this continues when the base changes to grey for the 352 too.

I have not seen a 352 with shaped wheels although, as it stayed in production through to 1962 in parallel with 207 so they may well exist and would be a little special to find one day.

I am also aware that on some M models with friction motors there have been two versions - with or without an oil hole. Whether both exist on 207M in particular I have yet to discover. I am going to assume they do, being a standard-looking chunk of metal that I imagine would have been distributed across the factory for the whole range of friction motor models. All that I ahve seen to date, though, have had the oil hole.

So the Standard is not quite as 'standard' as you might have thought! Not many sellers are aware of the differences so you should be able to collect the scarcer variations without having to spend too much.

Just for fun and to try and save some damaged models, I made this Peace & Love edition of a VW Camper last year using my own recollections of 1967 or thereabouts. Now I see that Corgi have copied my idea :) 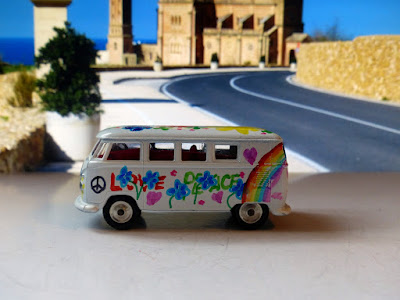 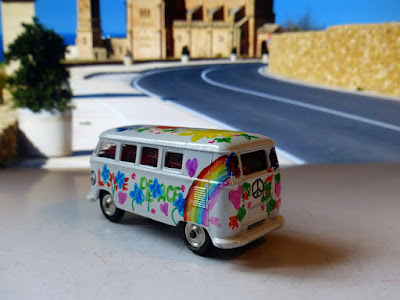 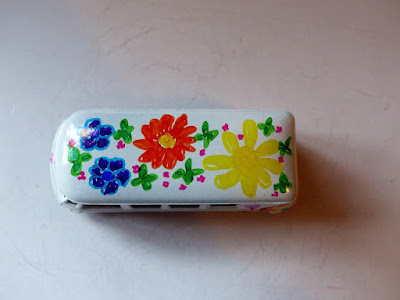 I actually think my versions are more accurate. No-one had such precise artwork in those days! 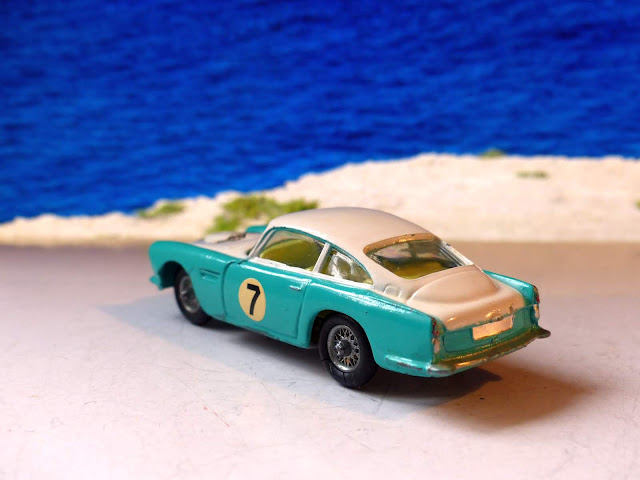 This was an update on the 1963 catalogue in which the illustration showed normal shaped wheels. The little red book that was issued with The Great Book of Corgi (1st Edition) also lists this quite specifically with an issue date of December 1964.

The same catalogue and leaflet also show the 303S and 304S Mercedes 300SL models getting the same treatment. For a long time I had assumed that this referred to the issue of the Mercedes cars with cast wheels with a louvre pattern of the same type found on other models. I had seena  few of those. Then I discovered genuine original examples of the Mercedes with 'spoked' (wire) wheels and had to accept that they did exist, eventually owning both.

The Aston Martin, however, remains, in my opinion, one of the scarcest models of all if, indeed, it does actually exist. The date for sales ending is shown as 1965 so a December 1964 release would imply low numbers anyway. We know that the Mercedes are few and far between. I have encountered three so far in about 7 years and that includes many views of Vectis and QDT auction lists. I have neither seen nor heard of the Aston Martin and that intrigues me.

Fitting wire wheels (as I call them) makes so much sense and I have always though that they would look fabulous on the model. Eventually I found a late issue 309 (with the closed vent) that was in reasonably good condition and available at a reasonable price too and have used this to make a copy of that elusive holy grail of a model.

The wheels are from a Ferrari Berlinetta of similar vintage and the axles are as fitted to the original Aston Martin model. Removing the shaped wheel was quite hard work and required a bit of patience to file down the ends of the axles without damaging the paintwork but otherwise replacement was a pretty simple job.

This will now take a prominent position in a cabinet at home until either a real one does actually appear at a price I can afford, (or persuade myself that I can afford!) or until someone pays the very silly price that I shall ask for this one. Hopefully the promotion of it will encourage more people to have a look through my catalogue and stock and buy something or, often equally valuable, bring me some useful background information or technical knowledge. 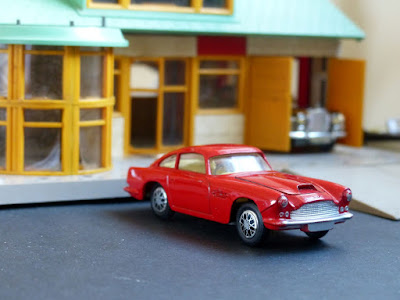 It's March and the local toy shop gets an Aston Martin to put on the shelves! #218 was the Aston Martin DB4 and this would be the very first Corgi to have something that opened, with its opening bonnet to reveal a detailed silver painted engine.

It was available in a creamy yellow and various shades of red. I have seen quite a range from brick red to a quite dark red shade but most hover around the brightish red shown here.

The red model will have lemon yellow plastic seats and the yellow one red seats. The early issues have fixed, smooth wheels and many have had a 'wire wheel' sticker attached which makes me wonder whether a set of stickers may not have been included in the box with these at the outset. They are quite different to the 'white wall' trims that were issued in accessory packs and often applied to Thunderbirds, Renaults and Fiats in particular (being the models available that most suited them at the time).

Later the Aston would get fixed shaped wheels (which, as I have written elsewhere, seem quite scarce), then an unattractive cast wheel attempting to resemble wire wheels and finally free-spinning shaped wheels. The bonnet would also change from having an open, quite large vent to a less substantial and closed one. This change is at around the time of the introduction of free-spinning wheels although you may encounter cross-over variations.

The engine element, initially a separate casting also later gets changed to become part of the main body casting and the bonnet hinge mechanism changes at the same time. I don't know when this change occurs but I believe it is fairly evenly distributed amongst the open vent type. 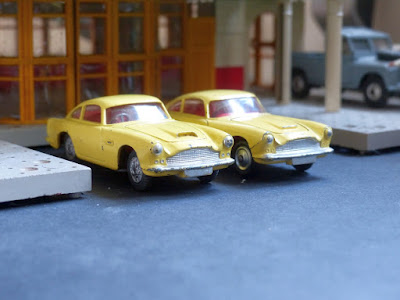 A Competition edition will appear a couple of years later with jewelled headlamps and a new colour scheme (and again two types of bonnet!). As we all know, this casting would also later be used again for the James Bond issues (despite that being a DB5!)

The Aston Martin was a hugely popular model, even before the gold one appears. The number of variations, however, mean that some quite scarce editions can be found at modest prices.

The other items arriving at the shop this month was the ERF Dropside Lorry with a platform trailer and two loads - the planks and cement bags issued in February. (I have revised my text on this!) 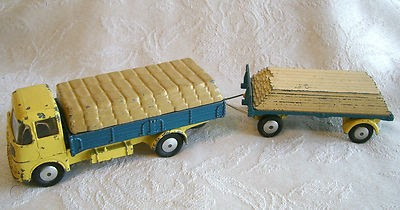 Gift Set 11 was allocated to this set which is always in yellow and blue, with an early style towbar on the trailer and smooth wheels on both at the outset. An accessory Pack C was included too.

This is, in fact, the first appearance of the #456 ERF Dropside Lorry, which does not appear individually until November 1961. So it is likely that, if it has smooth wheels it has come from this set and not an individual boxed item.

One source refers to the number 1079 for this set which may have been a reference number in the little red book issued with The Great Book of Corgi - that's where the source copied most of his site information from but I haven't been able to check yet. The same site also says that the trailer should be silver with blue mudguards but as far as I can tell all the sets issued had matching blue load areas and yellow chassis.