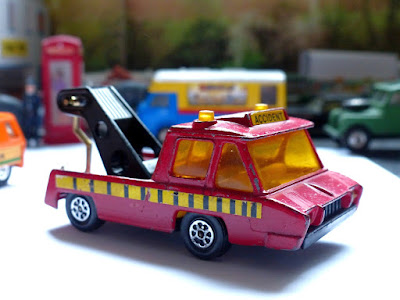 The 1974 Corgi Catalogue had a couple of odd additions, a 'Motorway Service Ambulance' and an 'Inter-City Mini-Bus', with catalogue numbers 700 and 701 respectively. Issued in February 1974, these are a curious thing to arrive just as Corgi are going 1:36. (The Breakdown Truck, 702, shown above appears in April 1975.)
These have no make and resemble nothing on our roads at the time or, for that matter, at any time. They're a big ugly with design features I cannot even imagine even the worst of vehicle designers in the 1970s coming up with and the scale is strange. The steering wheel on the Mini-Bus is tiny, half the size of the one in a normal 1:43 Corgi but they're not Junior size either. They have no suspension. The wheels are the ubiquitous 'four crowns' style Whizzwheel of the day but they are not branded as 'Whizzwheels'. Quite where they were intended to fit in the range I have no idea. 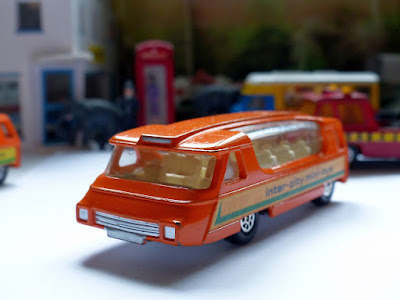 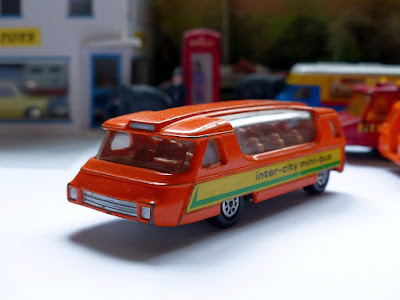 The Mini-Bus had two variations - a white or brown interior. 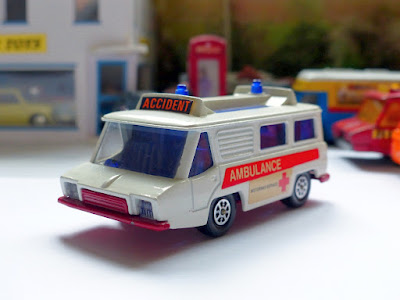 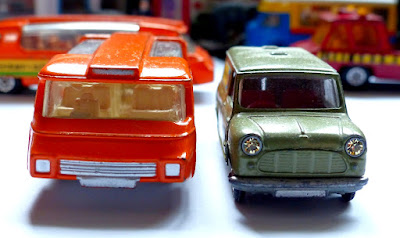 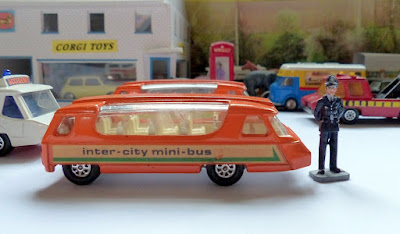 It is clear that these models do not in any way sit comfortably with anything else in the Corgi range, as is amusingly illustrated by this illustration from their 1978 catalogue! 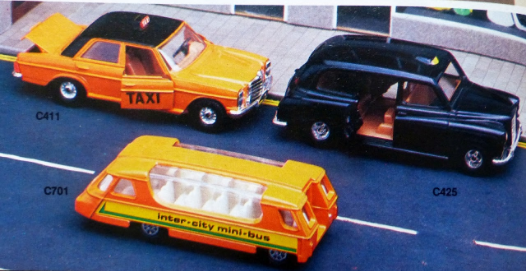 702, a breakdown truck with the same front end as teh Ambulance and 703, a Hi-Speed Fire Engine with a similar front end to the Mini-Bus, would appear in 1975 and, in December 1976 a Security Van comes along with the same front end as the Ambulance but with a number 424. From what I can see these six models are a group of their own. But I have not a clue as to the point of making them.
They are most certainly not Corgi at their best and really would be best forgotten. I have only acquired them because I thought they were 1:43 or thereabouts and had only put off adding them to my catalogue because they looked so awful in the pictures. Now I see that I probably don't need to add them in at all (but I probably will).
The entire range of these oddities can still be purchased for a song today as they are not very popular.
Posted by Andrew Hill at 13:56