Corgi Model Club: the mystery of the Bond Certificates 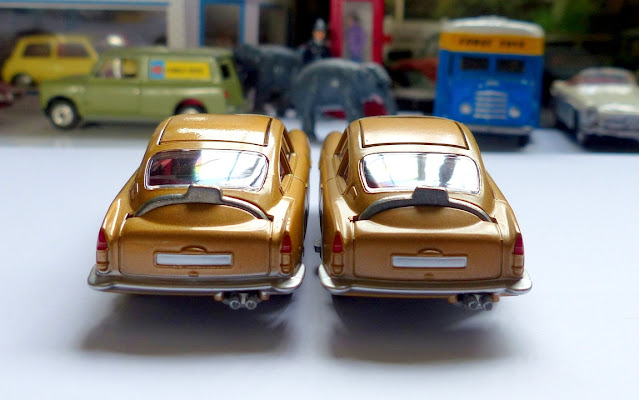 I have written recently about the second issue of the Corgi Model Club's 261 model. Now lots of people are writing about this in various social media posts. It's all about the certificates that are being sent out with the models.
Just to recap, we were told that the Club were not very happy with the finish on the first issue, which many of us would have received in January this year. It was silky rather than shiny. I doubt I would have thought twice about it if they had not only brought it to my attention but also offered to exchange it for a later revised issue when that became available.
This first issue was to be a limited run of 5000 as also stated in the letter we received and on a leaflet accompanying it. My certificates are numbered 116, 376 and 1513. I was particularly keen to have these as 5000 isn't a big production run and, despite the supposedly less satisfactory finish, I could see these being quite sought after.
Now the second issue is out and, yes, I can see a bit more shine when viewed at some angles in the sunshine. It is nothing like as vast a difference as I had expected and, indeed, I genuinely reckoned the Club must have sent me a first issue! This was reinforced as I had the leaflet referring to a limited issue of 5000 and certificates numbered 3769, 4372 and 4782. As the numbers were below 5000 I wondered whether they were first issues after all and my eyes were deceiving me paint finish-wise!
It is quite amusing to read all the posts along similar lines on Facebook this week and I suspect this will go on for a while as new people get theirs and all and sundry wonder out loud what has happened. One chap even has received cars from the 2nd issue with certificates numbered 5498, 5499 and 5500 as well as a 'limited edition' leaflet!
Now, it is, of course quite possible that the Corgi Model Club have not had a limited production run at all for the first issue - they just pretended they had and hoped no-one would notice. I don't buy that as they are highly unlikely to be stupid enough then to print certificates with numbers greater than 5000! My guess is that they did have a limited run for the first issue but didn't sell them all. I don't know what the biggest number has been on a certificate received with the first issue but let's say it was around 3000.
The surplus first issue models get put in a back room somewhere as the second issue arrive. Staff carry on as they did before, sticking certificates in with the boxes and the same leaflet as before too but not the letter apologising for the finish. It's a mistake - but that's life.
What I don't know is whether there might be a plan to limit this second issue to 5000 as well. That would tie in with the inclusion of the leaflet and make the certificate not such a big mistake after all. But if you get a certificate with a number over 8000 then it would begin to look more like that not being the case.
As it stands, the first issue is the limited edition and the second isn't. They're both lovely models and I would expect there to be a strong demand amongst those who cannot buy them abroad as well as dealers stocking up here in the UK. Members who joined recently will automatically get one of the second issue at £23.98. The rest of us in the UK can order them from the online store at £33.98. (So if you are abroad or looking on Ebay to buy one do bear that in mind!)
Perhaps the Corgi Model Club themselves should now tell us about the mystery of the certificates or we will have to read yet more posts about this!
Incidentally,  I notice the Ford Mustang Competition model is shown as 'sold out' in that store. I am sure the Aston Martin will be more popular so it will be interesting to see what happens with that.
Posted by Andrew Hill at 20:11