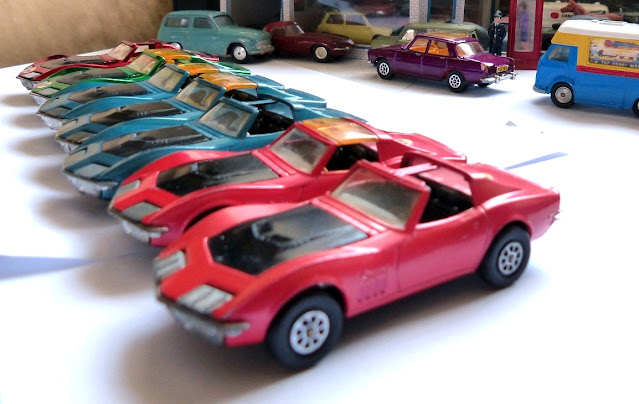 In April 1970 the fabulous-looking Chevrolet Corvette Sting Ray Coupé, model number 300, appeared in the shops. It was the first model to get an expensive liquid metallic finish, in either bright deep red or emerald green. 10/6d bought you this model with Golden Jacks Take-Off wheels. One of Corgi's most attractive models and still much sought-after today as it simply looks so good on display.
According to the Corgi records, however, production was to end later that year. As with all the Golden Jacks models, however lovely the wheels were and inventive the system allowing their removal and replacement, this was not a fast car on the carpet track and just a small flick on the Lamborghini issued just one month earlier would send it far further than the few inches managed by the Corvette. It was a model to hold and cherish but not play with. People weren't ready for the just holding and cherishing stuff then, and Corgi had already tried this market with their Classics range with no great success but we must now thank whoever was in charge for getting this into production, even if itw as for a very short period.
In June 1972 it is re-issued, now as 387, wit Whizzwheels and a new colour scheme.

As far as I can tell the metallic blue edition was the first colour available. It lost the badge of the front but retained one on the rear panel. That, I have found, tends to be put on in several different orientations, probably because there was no clear guidance to the ladies doing the attachments on the production line. The wheels always seem to be the 'four crowns' type, by far the most common across the range at this time. I have not seen any with the earlier 'pepperpot' wheels nor any with what would have been a far better idea, the chromed variety fitted to cars like the Datsun and Citroën SM.
It lost the jewels in the rear lights too, although there are a few transition models in blue with them still in place. The new issue has just rather sad blobs of mazak where the casting has been changed with little great effort to show the iconic rear lights at all. Dabbed with red paint on the blue model but totally lacking anything on the pink one! Money must have been tight then, indeed!

The pink model appears sometime after the June 1972 release and has the same black interior as the blue. I have not seen a pink 387 with any rear light jewels. Initially it has the same headlamp covers as before but late models have a ribbed cover which is quite distinct. I have only seen the ribbed covers on the pink model. 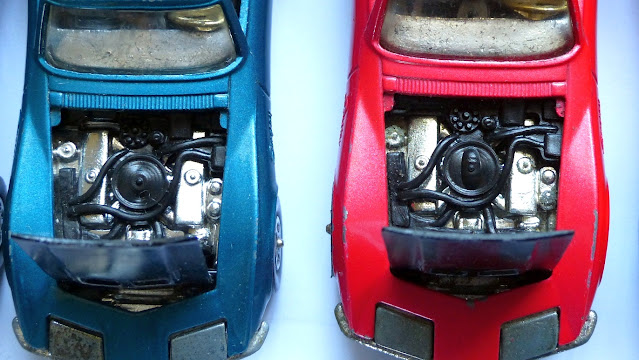 Under the bonnet there is another surprise. The beautifully detailed engine has a different air filter in one of my earlier pink models. The later one with ribbed light covers has a similar design to the blue one illustrated here, which seems to have been the style from the start.
So there is plenty to collect with this range and all we need now is for someone to make some spare roof panels. These are easily lost or broken and surely shouldn't be difficult to make. I have 7 Corvettes at the moment and need 7 roof panels!
Posted by Andrew Hill at 13:50