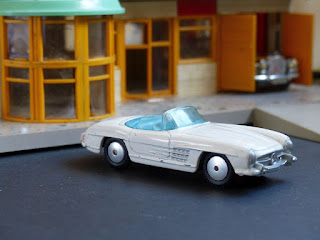 Ignoring for the time being things like colour variations and wheel types, this is one of the very last Corgi Toys I needed to find.

Just in case you haven't been keeping up, I set out a year or two ago to get a reasonably decent example of every model produced from 1956 to whenever the British 1:43 scale ended which seems to be around 1977. I photograph and document each one and then put them up for sale again in most cases. One or two I will have trouble parting company with but there is still a massive stock that is available for other collectors now.

There have been quite a few Mercedes 300s around but so far they all either had damaged screens, had been restored or were one of those immaculate, never-been-played-with models in a box for hundreds of pounds. Finally, after a long time looking, I've managed to get this at a reasonable price from an old collector in the States. To ease the postage costs per item I also bought a very nice Aston Martin DB4 from him which is shown in a recent post.

That screen must be vulnerable and when models were packed away I guess many suffered as, whilst quite sturdy, it was probably seldom protected. Whilst replacement screens can be bought I don't think they can be fitted without taking the car apart so decent originals will forever be diminishing in availability. The wide expanse of bonnet and raised strips at the sides are also usually scratched or chipped and this one also has a couple of chips on the sides. They are very small, though, and it's more than good enough for my purposes.

This was replaced in 1961 by the 303S, mostly found in silver plate but also in white or blue, with racing stripes as a Competition model. That had a suspension system unique to the #303S and #304S.

The same body was used for the #304 hard top and the #304S still didn't get any interior so can often be confused with #304, the suspension not being particularly obvious and the car still just looked like it could be the 1958 version. Although it never appealed to me much at the time, these are quite impressive models. It looks a bit unexciting in white but the silver parts are excellent and well defined.

I am nowhere near 'complete' yet, though. There are another seventy or so models with different wheel types or colours I shall be looking for and writing about!