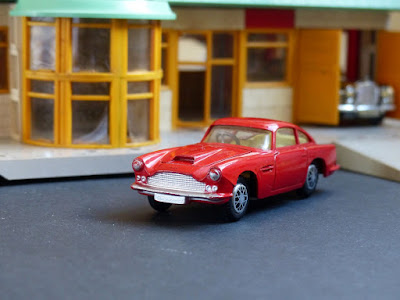 If you want just to gaze at a model of Corgi Toys at their finest in the early 1960s then you could get this lovely Aston Martin DB4. This one came from an old collector in the States and it is the best I've encountered. It has the open air vent on the bonnet and just looks as new. The wheels have those 'spoke effect' stickers and even they have been applied accurately and look great.

Corgi did make some strange choices for the colours of their #218 DB4s though. You could choose between bright red and bright yellow. The interiors got suitably reversed. I have several red models and they seem to go from a sort of brick red to quite a deep shade. The yellows, too, go from a dark primrose to this bright shade. 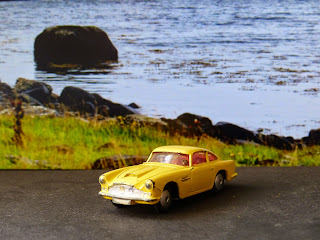 In 1962 it got jewelled headlamps and a new colour scheme - pale teal and creamy white, together with racing numbers on the doors and flags on the bonnet. The wheels were now free-spinning. Another glorious looking model. 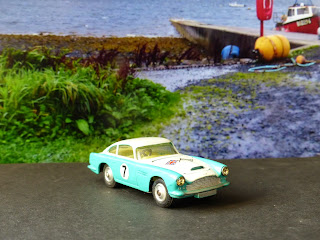 Everyone knows that the same cast was used for the famous Goldfinger James Bond Aston Martin and that was painted gold. OK, so the real car was a DB5 and silver but we didn't worry about little things like that at the time!

Some Corgi catalogues of the time also show the #309 Competition model getting spoked wheels. They would really suit this car and the Bond car had them but so far I have not even seen a #309 with them, let alone been able to buy one. The Mercedes 300SL models were also supposed to get these at the same time but, again, they are either damn scarce or never actually made it apart from a few promotional versions perhaps.