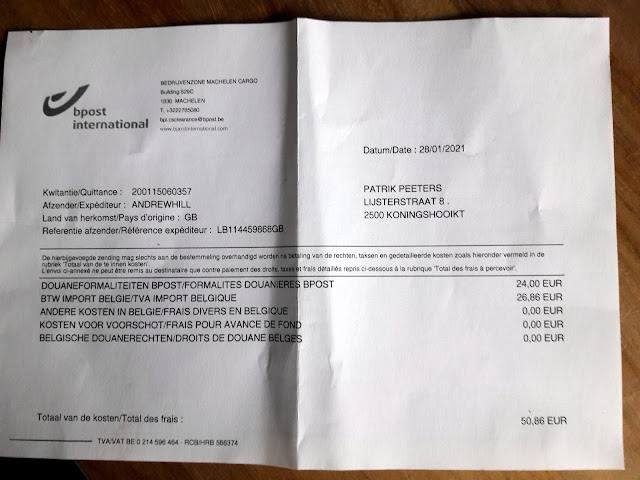 This is the bill for over €50 that a customer had to pay in Belgium before he could have a Rover 2000 Monte Carlo delivered.
The car had cost him about €95 with €15 postage, €110 or thereabouts in total. This additional fee, therefore, represents almost 50% of that price and, understandably, he is at a loss to understand why it is so high.
It would appear that there are two elements to the charge; duty, similar to UK VAT of €26.86 and what are described as formalities of €24. Neither if these figures makes a great deal of sense to me. I shall have to assume that formalities are something along the lines of a standard service charge but that is excessive, surely? I have had to pay such charges on items I have imported in the past but that element has always been comparatively modest, a matter of a few pounds.
The VAT rate in Belgium is 21%. So €26.86 would be 21% of €127.90.
The total price of the Rover model was £98 including postage which implies an exchange rate being used of £1 = €0.77. The rate is low at the moment but not that low! On the 28 January it was £1 = €0.88 so that element of the charge made also seems high.
Clearly there is not a lot anyone can do now and this does work both ways insofar as UK buyers will be paying quite a lot extra to receive goods from EU sellers but I have suggested that my customer query the bill anyway. I feel that I shall have to warn new customers who buy items for delivery not only to Belgium but other EU countries too. I would like to be able to estimate their additional charges so that they know what they're letting themselves in for but I doubt that I will be able to estimate the fee and, indeed, if every firm is going to charge the same sort of rate as the Belgians then I simply won't have many EU customers.
This is of some considerable concern as a good 30% of my sales go to EU countries. Additional costs of around 50% - and this illustration is quite a typical sale, value-wise - are simply not acceptable and I am unable to reduce my prices sufficiently to offset those amounts. I might consider sharing the VAT element with customers for a period but not if my gesture is going to be dwarfed by their administration costs.
I would be interested to know of others' experiences, both in sending items or receiving them and to be able to have some clarification, if that is possible, of what to expect in other countries.
Posted by Andrew Hill at 14:35