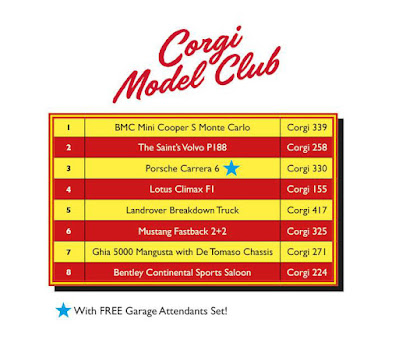 Following The Saint's Volvo P1800 we have the Porsche Carrera 6 to look forward to later this month. 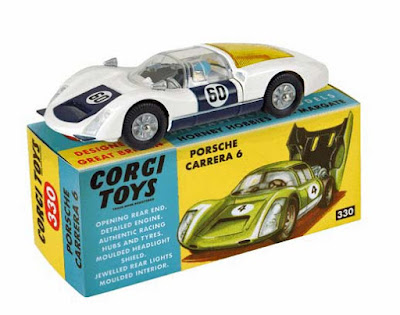 This would appear to be another really accurate reproduction and I am pleased to see that they have used the less common colour scheme with an amber engine cover. I see there is a driver too - there seem to be several originals where the driver has been omitted and I have yet to figure out just how scarce those editions are.
With this model collectors should receive a set of Garage Attendants, originally issued as 1505. These characters and the box look very accurate too. They were originally issued on white plastic sprues. i wonder whether that will be the case this time? 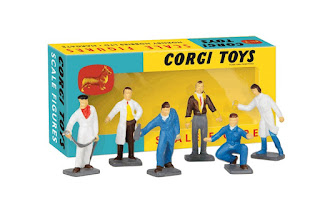 looking at the list, I am not too excited about the Lotus F1 Racing Car but the early edition 417 Land Rover will be interesting, as will be the Mustang, Ghia and Bentley! I understand that the Bentley will be in two-tone green as the original. I would have quite liked to have seen both this and the black over silver edition produced for this iconic and very major part of Corgi's history but one will be good to see.
The Mustang is the Competition model so will be in white with, presumably, the double red top stripes (and not the sill stripes!). Chalk blue or green interior? They also have a choice of three wheel types! I just hope the suspension lasts a bit longer than the original 325 model.
For the Ghia there is a choice of logos for the bonnet - DeTomaso or Ghia? An aerial that survives for more than a few weeks would be good too!
[Acknowledgements to the Corgi model Club for the images.]
Posted by Andrew Hill at 12:58