This is another really good model which is bound to delight collectors old and new. The Bentley Continental has been reproduced in the pale and dark pea green flavour and looks superb. It come wrapped in a thin protective sheet in the reproduction box with a numbered square certificate.

The 1961 release came in a quite wide range of shades for the upper half, even cream and a rare white! This tends towards the deeper of the pale pea green shades but is certainly very close to one of many original colours. 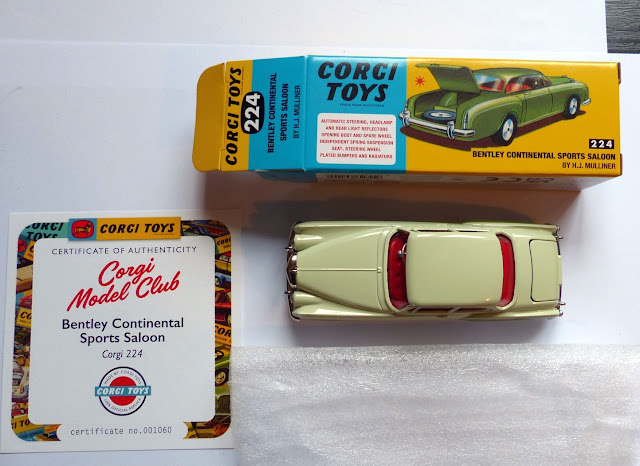 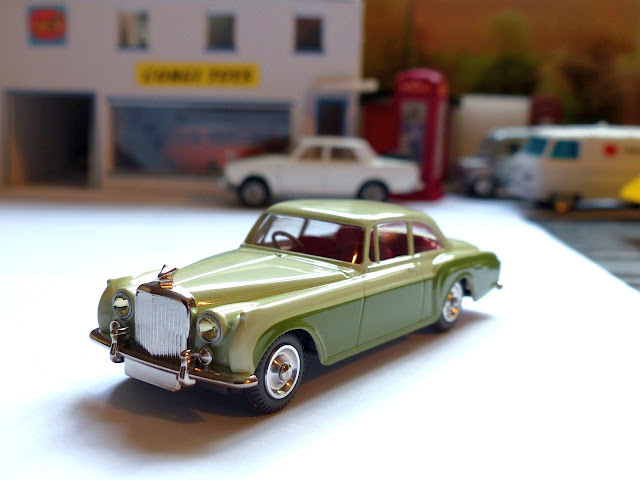 I have to say that it is a pleasure to look at this and I ge very much the same enjoyment from holding this as I still do from originals. 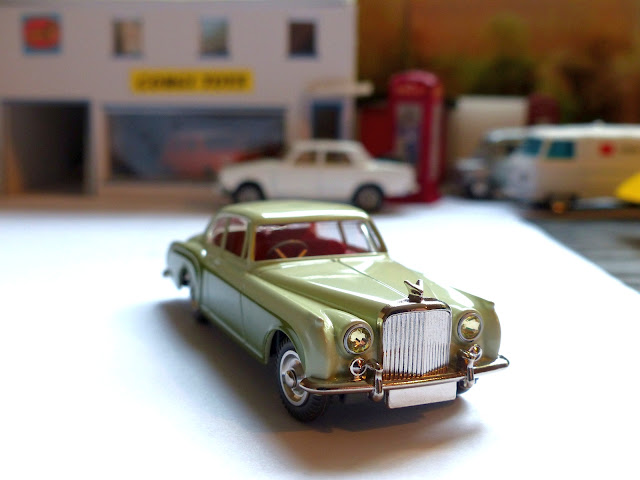 This model has always been one of my favourites. As well as simply looking so good, all the chrome, the jewels not just at the front but for the rear lights too and accurate steering as the icing on this model cake set it far apart from what else was available at the time! 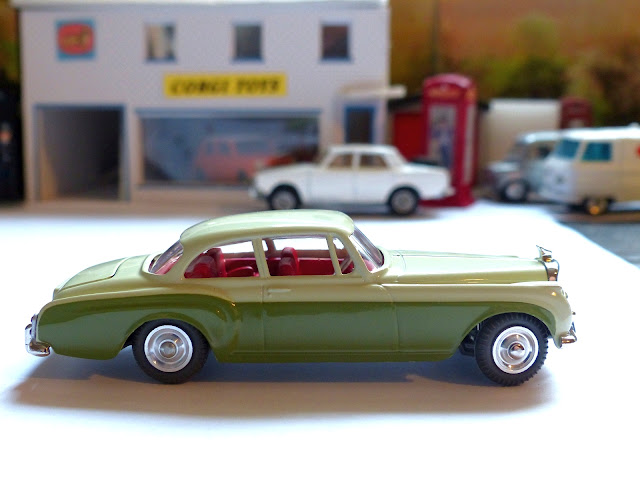 This 2021 edition has all the same features. The steering works just the same and appears to have been very accurately reproduced with the tiny springs and connector bar. 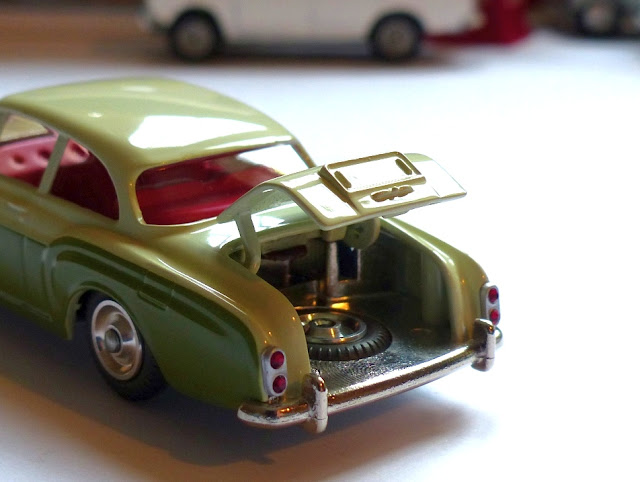 The boot opens and reveals the same chrome interior with a spare wheel too. In this image I have just noticed the indentations for dials on the dashboard - just like the original, although I have to admit I had not noticed them in the previous 60 years! 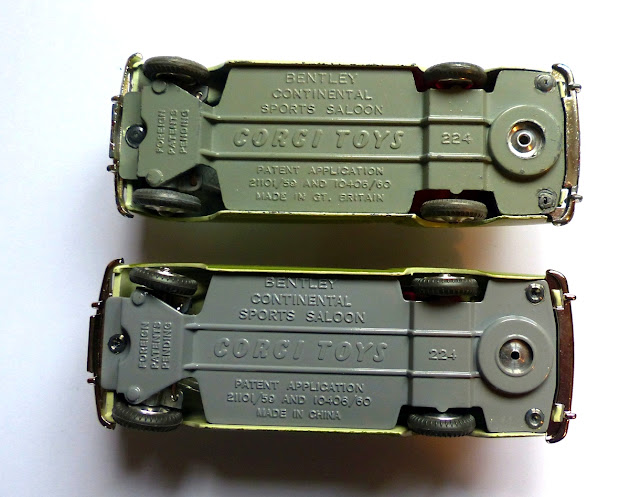 The base is very similar with just China replacing Gt. Britain in the text. 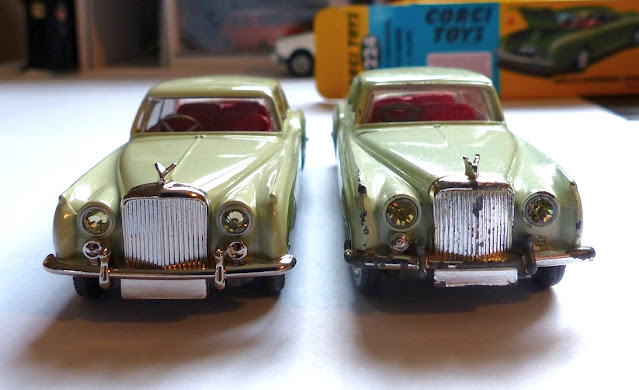 It was only by very close examination side by side with one of my own (somewhat worn) 1961 original that I noticed the wider and slightly different shape radiator grille. The registration plate section appears wider and a little deeper but that's just because mine has worn chrome. They seemed pretty much identical when I measured them.
The headlamps are significantly smaller. I think this is not just the jewels being smaller but maybe the hole in the casting is also smaller.
The wheels will appear different as they have bright axle ends and dark tyres whereas the 1961 models were issued with pale grey tyres. It is my belief that all were supposed to have been issued to dealers with grey tyres in 1961. Clearly there may have been mistakes or occasions when the grey tyres ran out and that may account for some reports of people having purchased models with black tyres. I think I prefer the darker tyre, though, and don't mind this one variation! 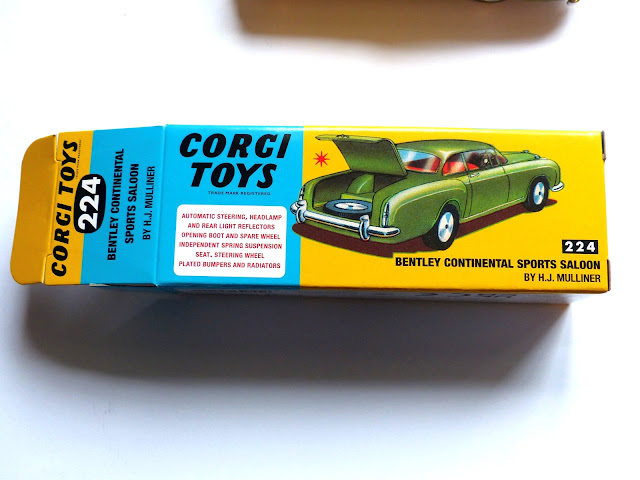 The box is familiar with the annoying cuts on the fold for the small flaps and its somewhat too shiny surface but it is otherwise a good job and I like the way the 'new stuff' is restricted to one side that can be kept out of sight in most displays! The only other change that has had to be made is the now familiar substitution of Designed for Made in Gt. Britain text in one panel. The quality and weight of card is excellent. 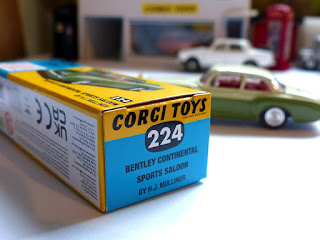 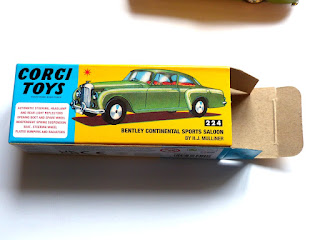 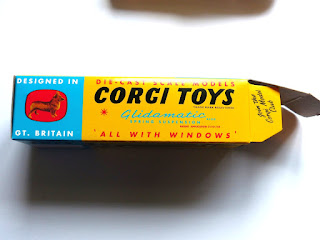 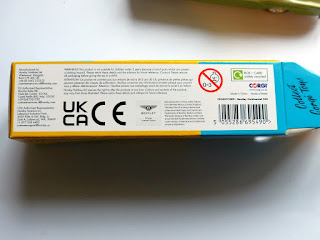 This is going to be a very popular item, I am sure. I do hope the Model Club chaps bring out the black over silver edition too one day!
Posted by Andrew Hill at 14:02