The Re-issue Mustang: getting the numbers right! 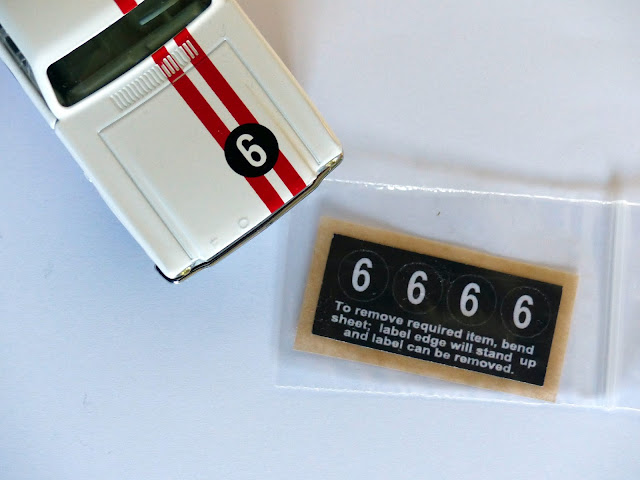 The recently re-issued Ford Mustang from the Corgi Model Club people is a lovely model (even if it shouldn't really have that red sill line which didn't appear with the fat 8-spoke wheels!) There is, however, one other matter that I would like to see fixed in any future models released with racing number decals.
The numbers on this model are transfers rather than stickers. That, in itself, is not a big thing, although I would urge the Model Club to consider excluding them from the transfer design and, instead, putting a separate set in the box, as would have been the case in the 1960s. The real thing that annoys me a little is the typeface used for the digit in this case. It's just not right.
I must give a bit of publicity to Four Little Wheels, which is actually a nice chap called Noel Wilson in Milton Keynes. I have often used his services to get accurate transfers for models like the Monte Carlo issues and the Sun Rally Mini-Cooper and Rover, amongst others, as the usual suspects make no effort in this respect and the error stands out a mile.
Following my article on the re-issue of the Mustang, what should appear in the post but these lovely paper stickers with the much better numeral - six on a delightful brown waxed backing paper with 'instructions'! Lovely.
I am tempted to order a few sets and use one to cover the the transfers!
Posted by Andrew Hill at 15:30