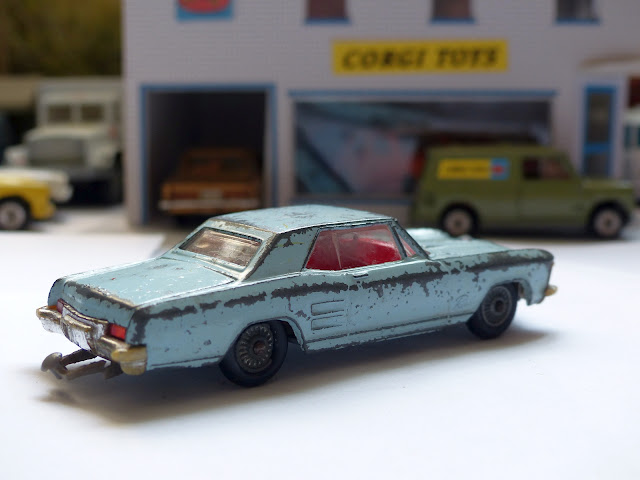 So the hook's broken and this Buick Riviera has been well played-with, for sure, but look - it's got cast wheels! These are almost unknown on the pale blue model. Usually it is just the late turquoise blue and some normal metallic blue models that have them. They're not that common on the gold editions but really scarce on the pale blue.
I would not have even known they existed if it had not been several years ago when I saw them on an immaculate edition in an original Riviera Gift Set. I tried very hard to buy the set but someone else clearly had seen what I'd seen and I had to drop out when the bidding went past £500 for the set. Add auction fees and heaven knows how much for postage and something approximating to packing and there'll have been little change out of £650 for a set which would usually peak at around half that, and that would be on a good day for the seller.
Since that disappointing experience I have looked high and low for another and finally I am the proud owner of a pale blue Riviera with cast wheels. And a broken hook and grotty paintwork, but I don't care.
The screens are clear and undamaged and the suspension is sound. The Trans-o-lite tubes are all OK and there's even quite a bit of chrome left on the bumpers. That'll do for me.
Posted by Andrew Hill at 19:39