The Land Rovers and Rice Pony Trailers in Gift Set 2

I was asked this week to list the various changes in content for Gift Set 2, the long-running Land Rover and Pony Trailer combination that was first issued in February 1958 and continued until December 1968 when Gift set 15 replaced it with the blue and white 'Pony Club' combination.

As this may be of interest to a wider audience I thought it would be a good idea to set out the variations here (where experts can also correct me if necessary!)

I am not sure about the intermediate dates. Whilst the fixed shaped wheels only started to appear in 1960-61 it seems that Land Rovers with smooth were in the box with Pony Trailers with fixed and vice versa! I have seen genuine example of both, in Gift sets I know were not changed after purchase. There is a lack of logic there but that's 'Corgi life', I guess!
The fixed drawbar is quite unusual to find on the red Trailer and, as I have only ever found this on a model with shaped wheels, I have to assume that it would have been introduced in 1962 shortly before the fawn model came to the shops at the end of that year.
Just to confuse us, however, there are examples of the red Trailer with fixed shaped wheels and a wire drawbar!
The red Trailers appear to have stopped being produced pretty much when the fawn colour came in and I have never seen one with free wheels which I am assuming came in 1963 or maybe the following year.
The very first ponies appear to have had a brown blanket but blue must have been available pretty soon after launch if not, indeed, from the outset so I would be inclined to regard either as acceptable content throughout. Any other colour, though, will be found to be one of the very good replacements readily available. 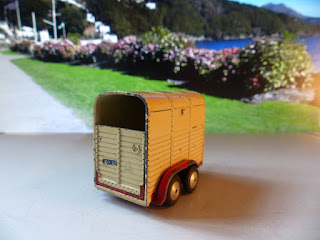 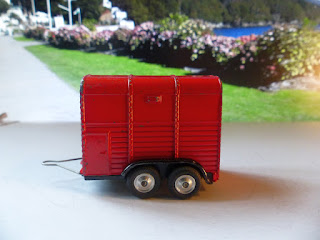 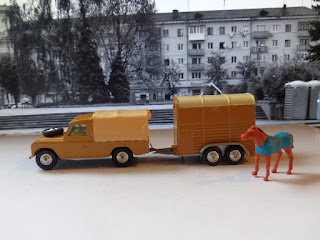 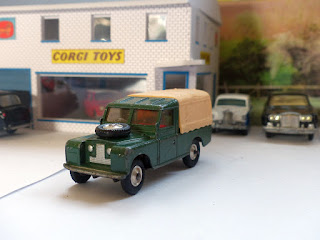 The Land Rovers with seat variations are particularly scarce and, whilst they may have turned up in a Gift Set, it is difficult to be sure as the items can so easily be swapped around now. I am inclined, therefore, to exclude them from the list of GS2 variations.
Much of this article has had to be inspired guesswork in the absence of much by way of documentation! So I welcome corrections from anyone with a better background knowledge but hope that, in the meantime, it is of some assistance to collectors.