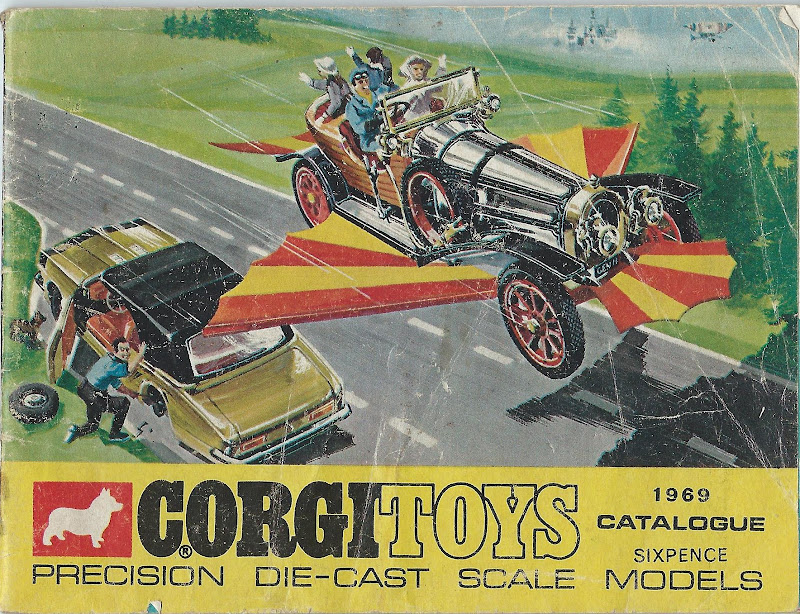 If you thought the 1967-8 cover was a little strange then here in 1969 you might become seriously troubled. On the back is a gloomy drawing of part of a city in flames which I cannot see inspiring many youngsters to buy the American Lafrance unit which is a massive thing and expensive too. On the front, a Chevrolet Camaro is in a lay-by with some guy changing a wheel has his attention distracted by something in the sky.

Now being waved at by ladies in Victorian dresses may not have seemed such a bad thing once you've got over the fact that they're in an ancient car that appears to have gone a little fast over a nearby hump-back bridge. However, if he'd looked elsewhere in the sky he would have noticed a very strange device approaching and a distant city that has a distinctly odd look to it.

I have no idea what the sky scene is supposed to represent but with models featuring Batman, The Green Hornet, The Man From U.N.C.L.E., the Saint, James Bond and The Avengers then virtually any premise would be justifiable.

Inside you will be wondering just what has happened to Corgi Toys with the first six pages solely occupied by media models, first Chitty Chitty Bang bang and then The Beatles' Yellow Submarine and then all the other TV / Film models you'll be familiar with. Next you get introduced to Take Off Wheels and Golden Jacks in the shape of the Rover 2000TC and Oldsmobile Toronado. Finally you'll arrive at a page with two blue British cars - appropriately the new Mini and the better colour of E Type and may think you can relax a little as three more minis and a Cortina appear. But no, more Take Off Wheels, this time it's the cover car Camaro and a Pontiac Firebird. Pontiac Firebird? Look back a few pages and you'll see that the Pontiac is joined by a Ferrari Dino and Lamborghini P400GT and a Mini Marcos in the Golden Jacks group. As you'll know now, the Mini Marcos makes it but the others don't.

This really does have the look and feel of an end of an era about it. Despite the excitement about such a great innovation that did actually work very well, a decision was made not to continue with Take Off Wheels but instead switch to Whizzwheels which would better compete in terms of running speed with competitors. There is no mention here, though, of that. But you kind of know something's happening, even in late 1968 when this was printed.

In fact, March 1969 was when the big fire at the Swansea factory destroyed virtually all the company's stock. I can only assume that this, as much as anything, led to a major reconsideration of the models and their future production and features.

An MGC GT is still illustrated in blue and white and shown as 'available later'. The Marlin Rambler appears with its Kayak trailer and is described as 'available separately without kayak or roof-rack' although whether this was in the nice blue and white I still have to discover. In that colour scheme, though are both the Citroen le Dandy Coupe and a Chrysler Imperial-based 'Bermuda' Taxi and a Lincoln Continental. This is a significantly rarer colour for the Citroen and Lincoln and the Chrysler never made it although I have heard reports of the Imperial normal car in blue and white.

Also in blue is the Renault 16 which actually only made it in red with cast wheels! There's a DAF City car shown with ordinary cast wheels too which never made it in that form. The Ghia L6.4 is still there but now with cast spoke-effect wheels and in the lime-gold colour.

Gift Set 36 is illustrated with a blue Oldsmobile Toronado towing the Glastron speedboat. No mention of Golden Jacks so there will have been a period when both types were on sale. I have #264 Oldsmobile with and without tow bars but all the #276s have tow bars. Oddly, I haven't ever seen a Gift Set 36 with the newer Toronado so I'm not sure quite what the tow bar was for.

There are six pages of Agricultural models, including a full ape for the Combine Harvester but, for the first time and very indicative of the times, no military models at all. Fascinating. All in all these 49 pages tell quite a story that you'd never guess from the cover.