Blue and really rather rare

Here's a treat, courtesy of a collector who has been corresponding with me recently. Never mind feeling green with envy, his really rare finds could have made me feel blue too! It is, though, sheer pleasure to share these with you. He doesn't want any formal acknowledgement but I am sure many people will be very grateful for the chance to see these. 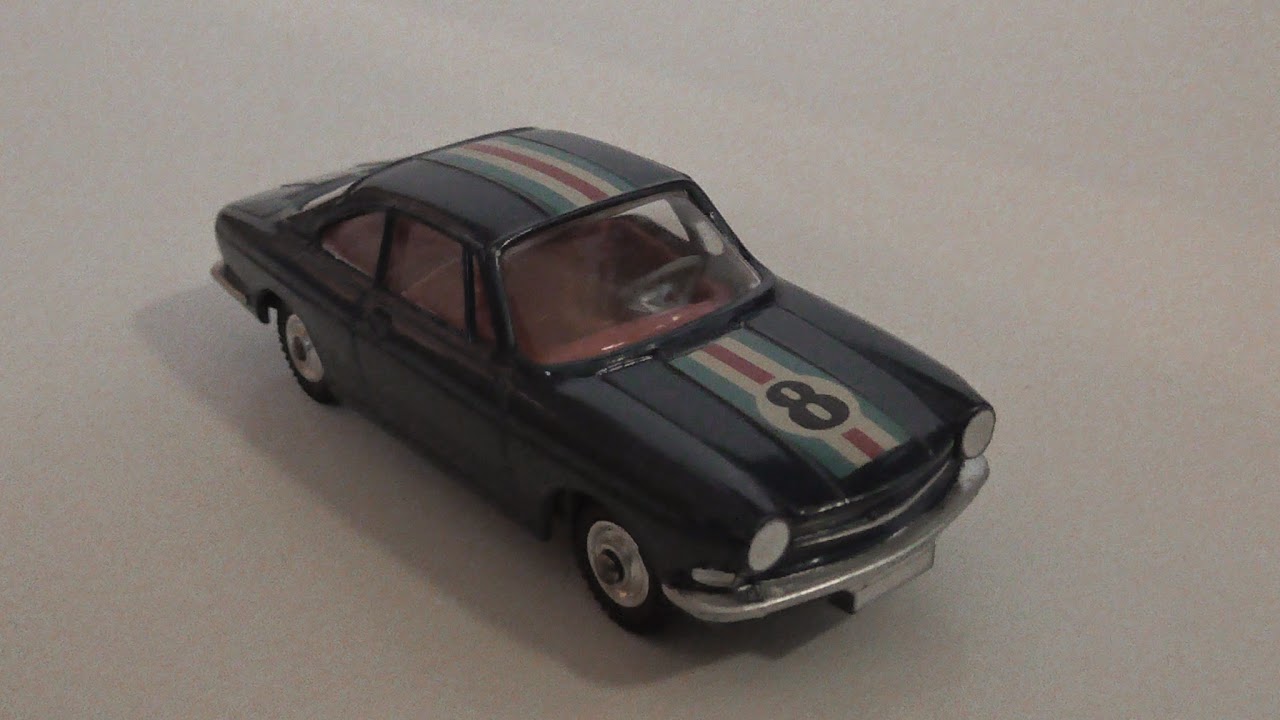 First is a #315 Simca 1000 with 'competition' stripes in a rich dark blue. The normal model had a plated silver finish, also used for the Jaguar E Type and Mercedes 300SL. My understanding is that this was not officially released in this colour but quite a few were produced and found their way into the public arena so, whilst you'll be extraordinarily lucky to find one you'll be unlikely to afford it! 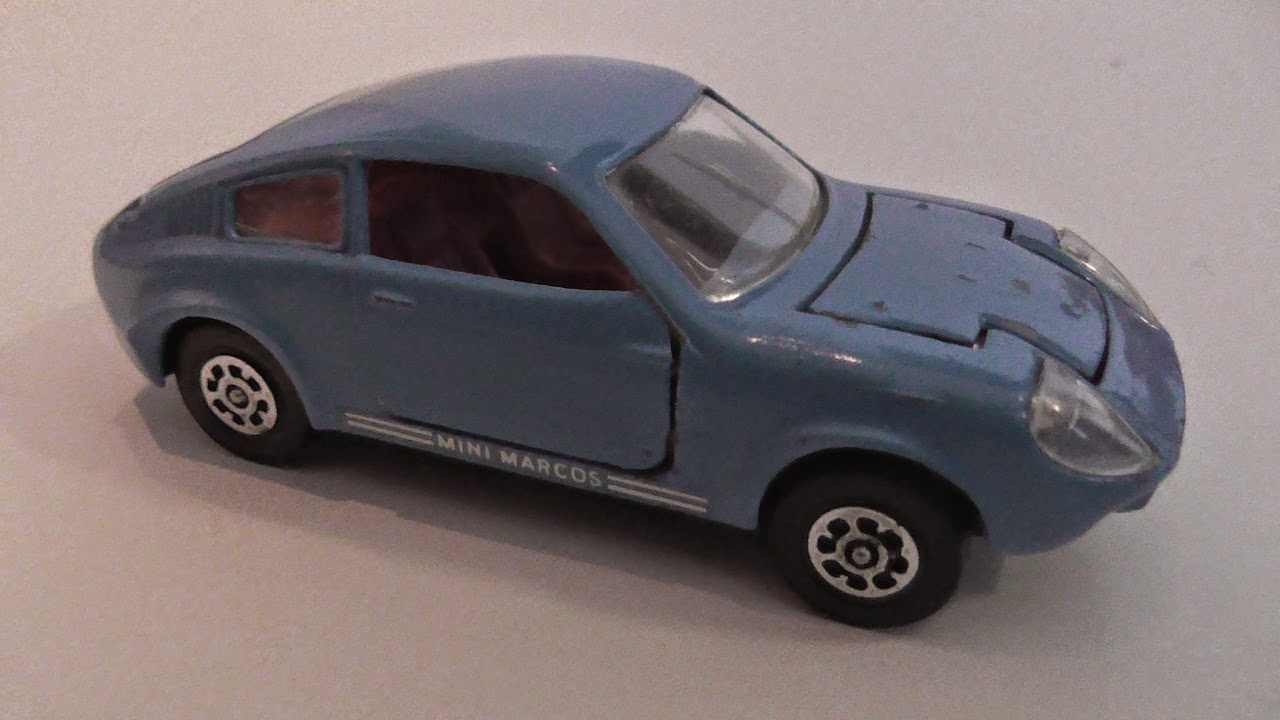 Next to share with you is the #305 Mini Marcos GT850 in a sort of deep sky blue. This is the Whizzwheels version of the maroon one that almost everyone had with the Golden Jacks wheels. The normal version of this was an off-white colour and that is pretty scarce itself, the Whizzwheels version not being terribly popular. Few will also have survived as they were very flimsily built and inclined to get easily damaged. The blue one was an official release and would most likely have been found in a car transporter set. I have seen one set for sale recently and they will appear from time to time. They're not the prettiest of cars (and I spotted the real thing on the A43 near Towcester last week which further reinforced that view!) and you may be lucky to pick one up without needing a second mortgage. 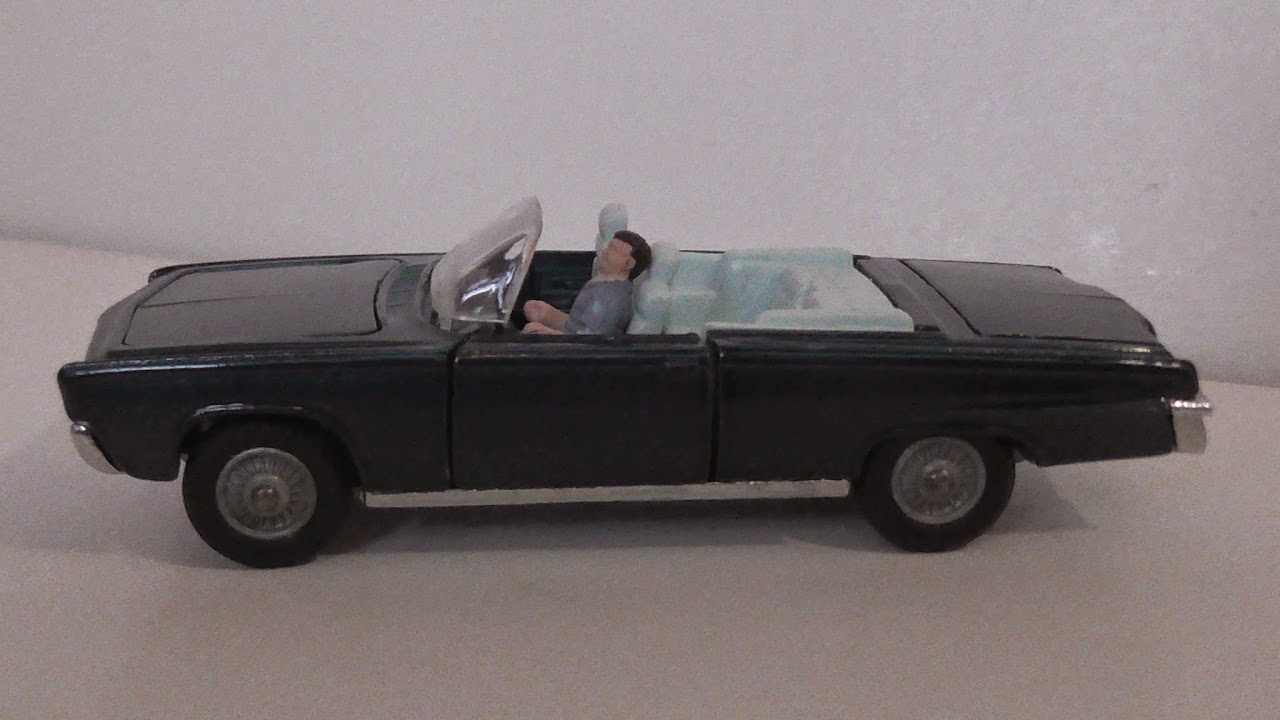 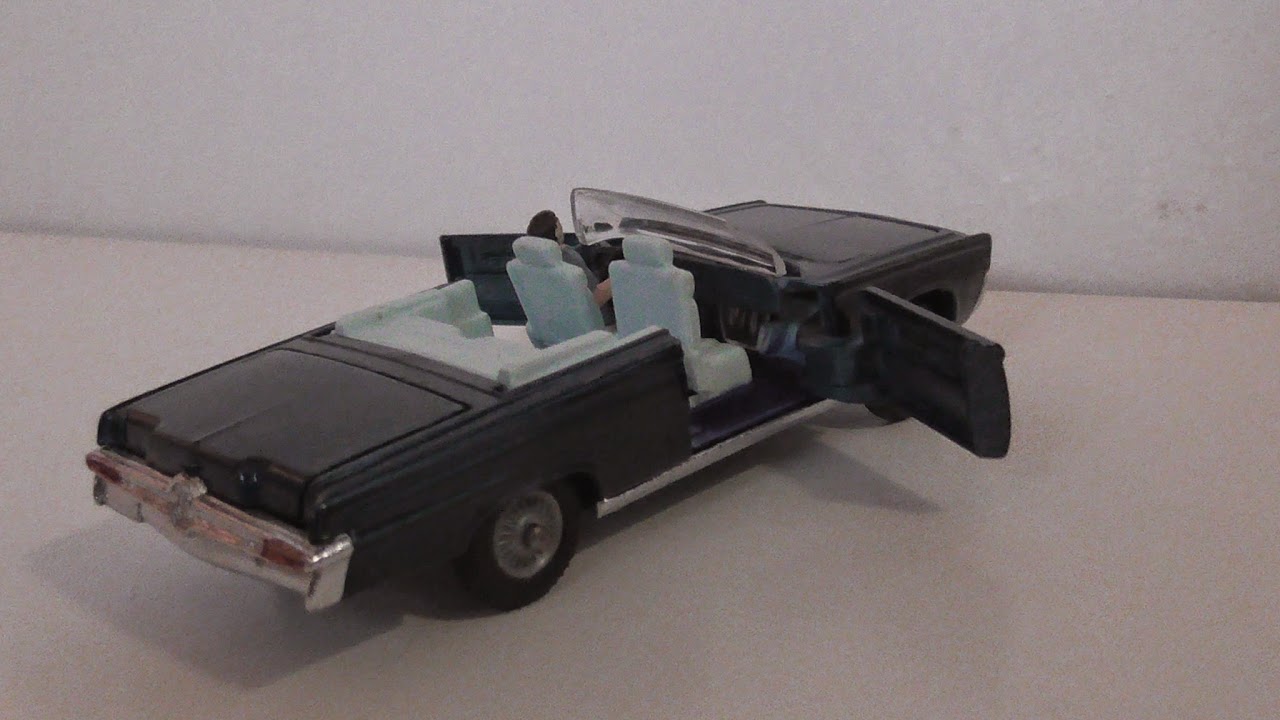 The third blue car that my correspondent shared with me and that I now share with you is the #246 Chrysler Imperial in kingfisher blue. I always think that kingfisher blue sounds delightful and would seek out cars that shade almost just for the name alone. The photos don't really do the colour justice, appearing rather darker than it would appear to the naked eye in daylight.

Now this is also extremely scarce but it did, at least, sort of make the 1969 Corgi catalogue in the guise of #507 Bermuda Taxi, presumably intended to replace the old Thunderbird. Although the taxi never appeared I guess Corgi must have produced a fair number of these - and if you look closely you'll see the drilled holes behind the rear seats where the poles would have been placed - and presumably let them out in the wild as a cheaper version of the red model. 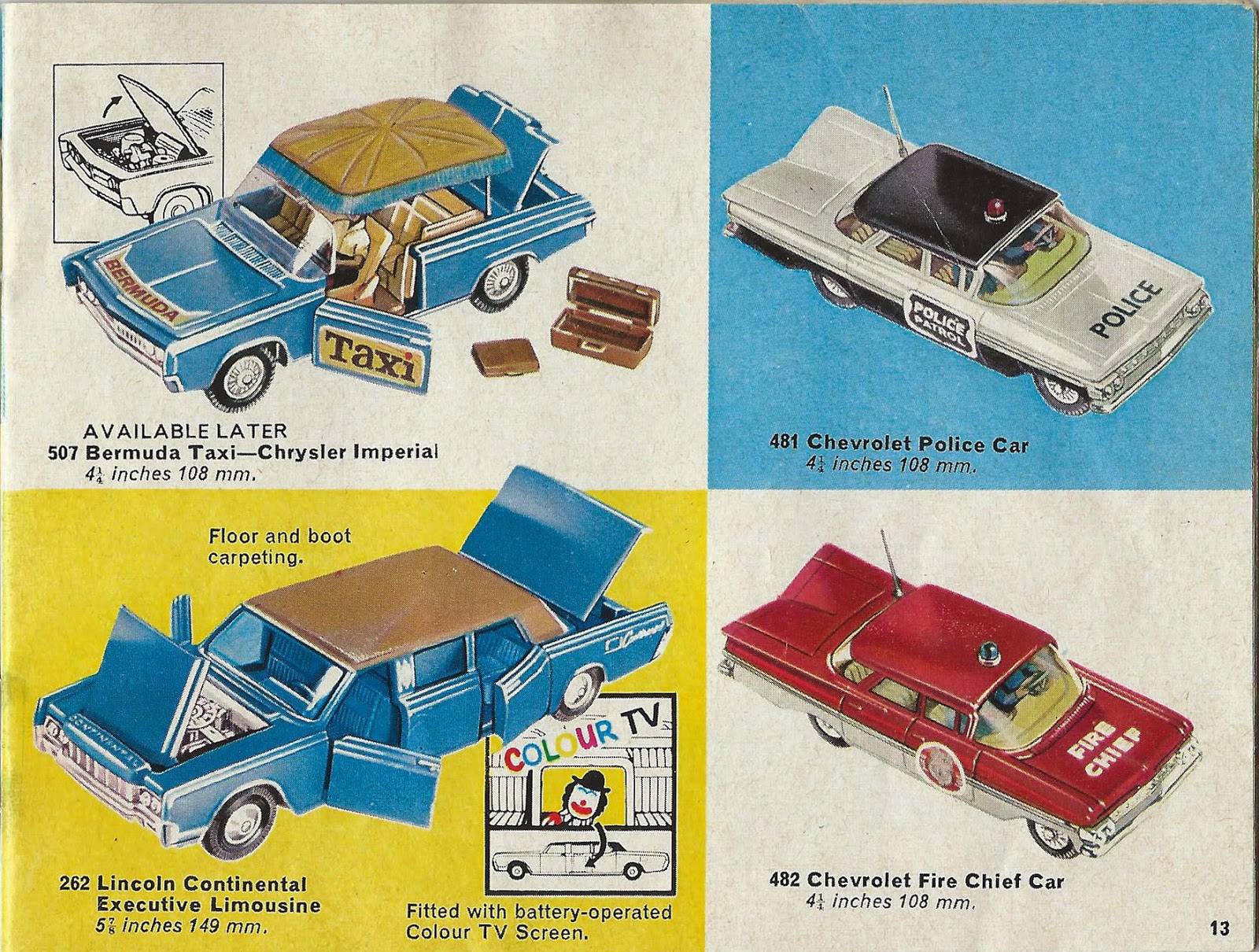 The pale blue interior looks pretty much the same as one of the two options in the red version but it loses the door inserts and we think it may also have lost the golf trolley. If that is the case, though, then the box would have had to be changed but that isn't something we've seen so remains uncertain.

I will add these illustrations to my main site in a while to make them easier to track down in future. I doubt whether I'll ever actually have one in the collection but there's no harm in looking! It is interesting that it is often the blue models that have been the scarcest. Another two that spring to mind are the Marlin Rambler (normally red and black) and the Citroen 'Le Dandy' Coupe (normally deep magenta). You'll find these without too much trouble but they are both quite expensive in comparison to the 'normal' colours.

Here are some examples of the real cars. My guess is that you could get the Simca for less than the 1:43 version! 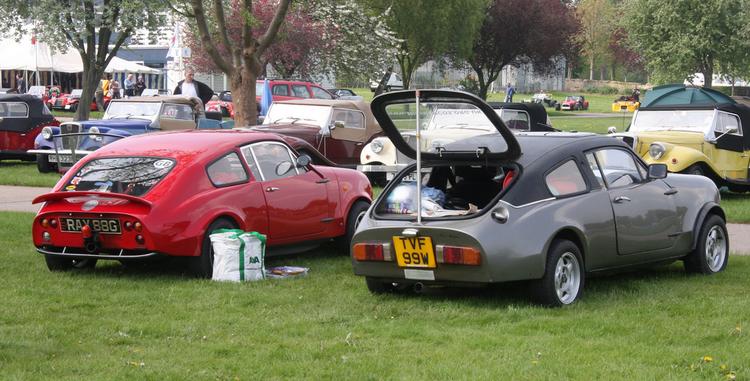 The Mini Marcos looks like some kind of little bug but plenty are still going strong. The model was pretty accurate, indeed, possibly making it more attractive!

The Chrysler model never looked right to me, sitting too high and fat compared to what it should have been like. Corgi usually got it dead right but did seem to struggle with some models.

Really acccurate was their Simca 1000 Coupe. A simple model that I often got confused with the NSU Sport Prinz out at the same time. 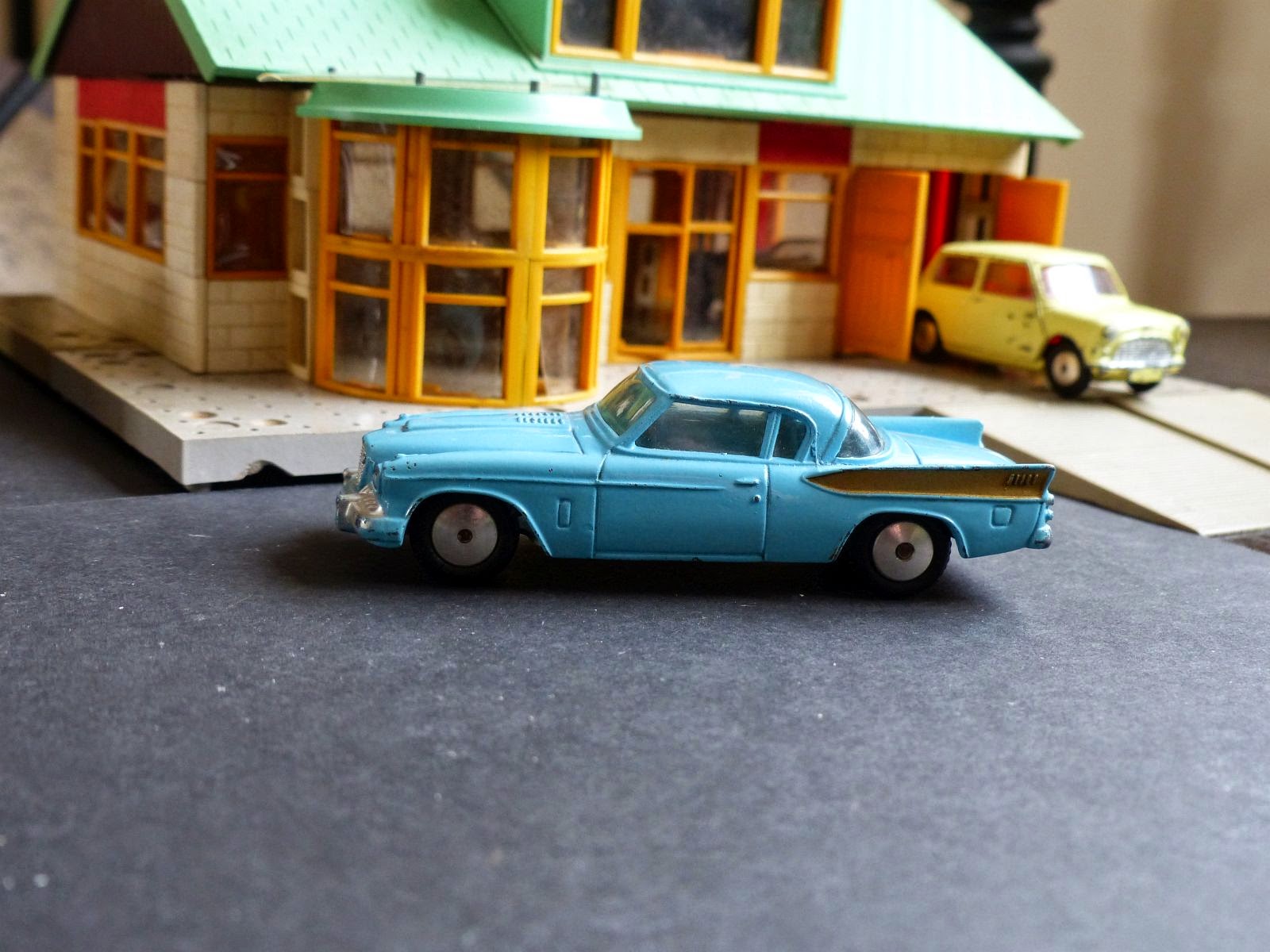 Great name. Shame about the colour. My guess is that the Studebaker Golden Hawks of the day would have been in a slightly pale shade of blue with the gold flash on the fin gleaming a bit more. This shade of neither one blue nor another didn't quite work but that didn't matter a great deal. If you were a young lad in the toy shop and had to choose between a Morris Cowley and a Studebaker Golden Hawk then the latter probably would have been what you exchanged your pocket money for.

This was the first American car in the catalogues, appearing in February 1958. It would be a good year or so before the Thunderbird followed. Whilst there was also an attractive white version with a gold flash, that was reserved for the mechanical version, 211M, and those being near the end of their appeal by then, few of that version were sold and are decidedly hard to find now.

This normal one, in fact, has been a long time coming and is nearly the last one to complete the numbered list. I'm still missing an early Mercedes 300SL Open Top 303. So far they've all been missing screens or had bad cracks in them. For a long time the Studebakers seemed to be very worn, as if kids had played with them particularly toughly and I almost began to think that there must be a grey version, some having so little paint left!

Corgi were very strict with the colours still and it is almost a relief to have just one colour available for each version, the only difference being the strange silvery-gold plated one. 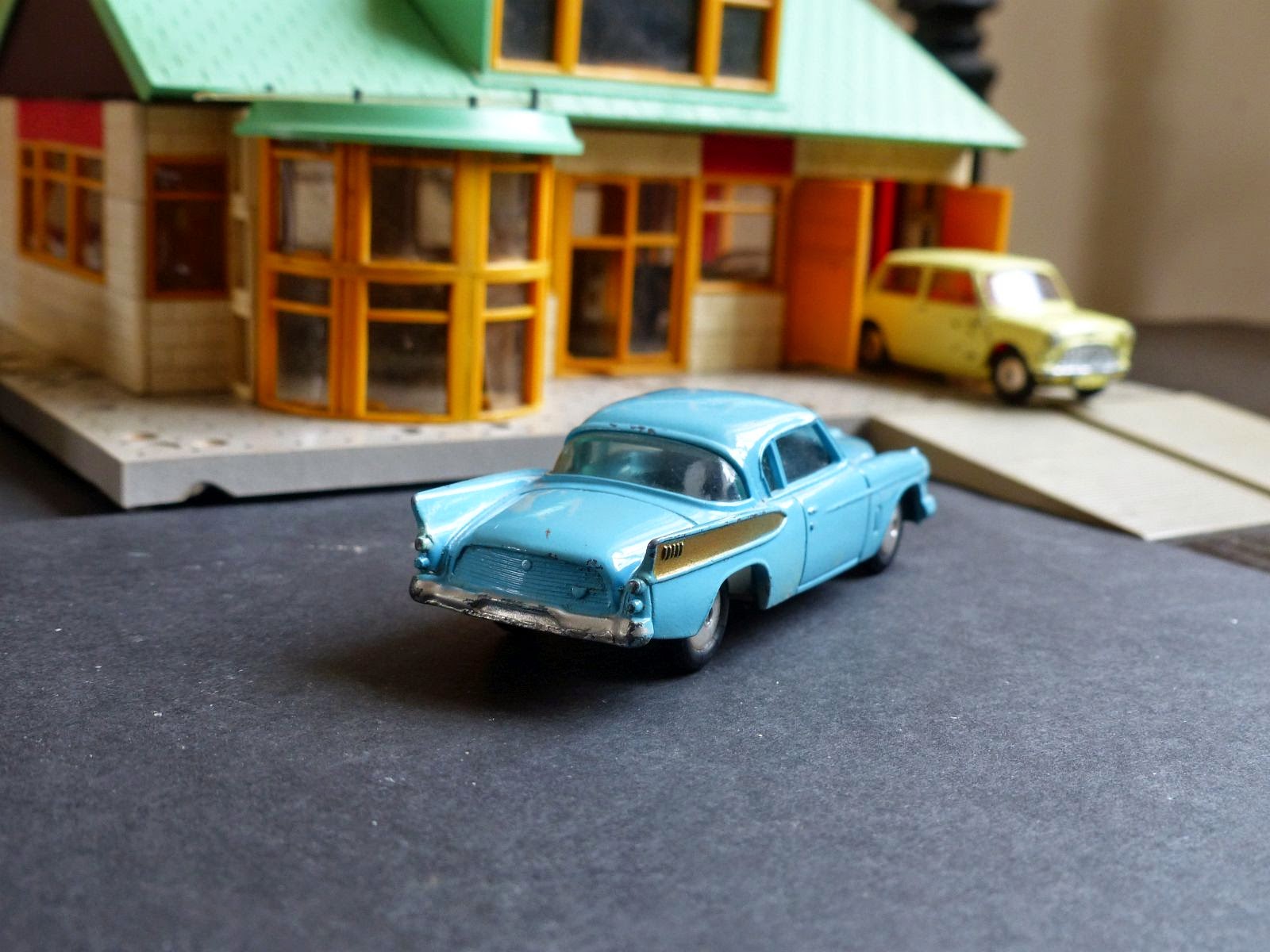 It is much to the credit of Corgi's engineers and designers that, when searching through internet images for the car, it is not always immediately obvious whether you're looking at a model or the real thing. Remarkable.