Charm on the farm 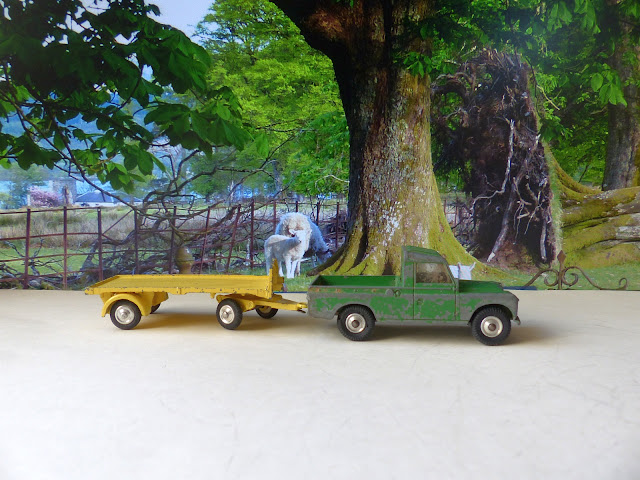 If you had been looking for a green series II Land Rover then September 1962 would have provided the first opportunity when Corgi issued Gift Set 22. This was a huge set containing lots of farm models and extra bits and pieces. Two items in the early sets were unique: the all yellow flatbed trailer and a mid-green 438 Land Rover with no canopy. 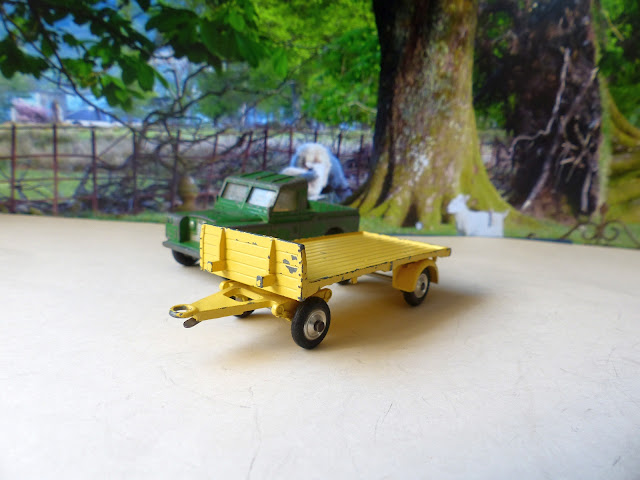 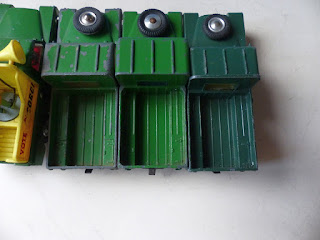 Shown above between the Public Address model and a Series 1 406 it is a pretty similar shade to those two and quite distinct from the deep green that you would have found in a box at the shop later that year.

Indeed, many Gift Set 22s seem to have the deep green model so my guess is that Corgi replaced the mid-green version at some point. The Gift Set did not sell particularly well as it was expensive at 50 shillings. That's almost one and a half Transporter Sets. So, for a number of reasons, the mid-green Land Rover in 438 Series II form is a rare item. Indeed, for a long time I have not been totally convinced that it existed. I had peered at small images on various sites trying to decide whether what appeared a lighter green was, in fact, just the light or even an old 406 that had been put in the set. 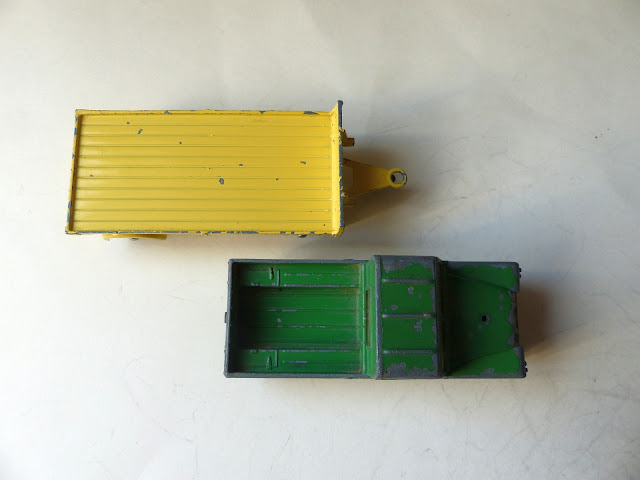 This example of the Land Rover is pretty worn, missing a spare wheel and quite a lot of paint. The hook is also missing its tip. The screens are fairly clear, however, and the suspension sound. I tell myself that clean, shiny Land Rovers never look quite right anyway!

The trailer is cheerful. It looks slightly too big behind the Land Rover but it is the same as the other later-issue 101 Platform Trailers issued, having the fixed drawbar and free-spinning shaped wheels. 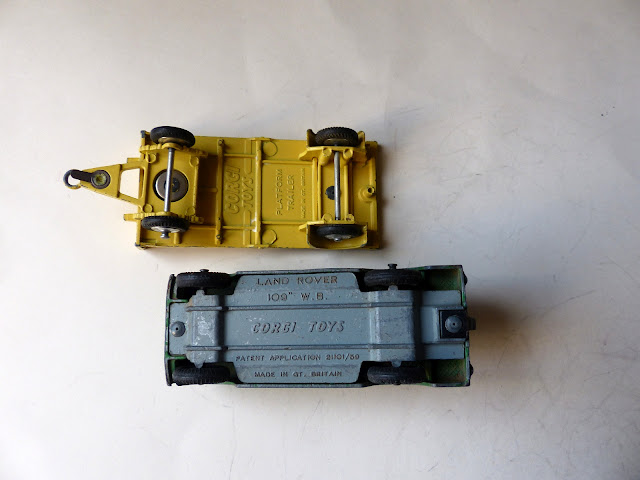 The search is now on for a slightly better example to be kept in a collection so these will be available to buy soon and the proceeds put towards the next ones. On past form, however, it may be a few years before another of either of these items comes along other than in a Gift Set at a thousand or two pounds (which is what this one is going for!) 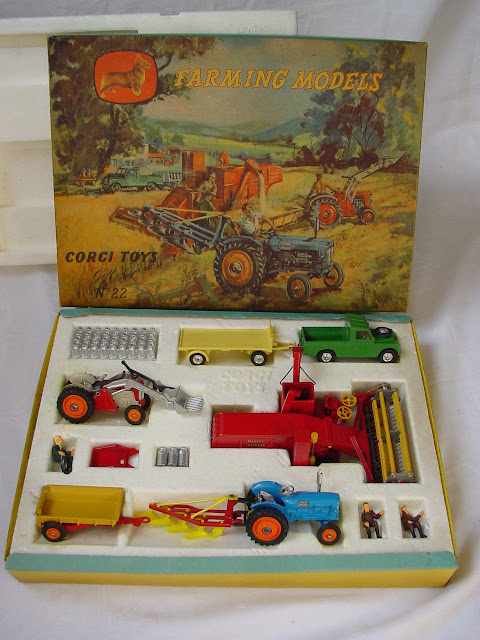 This week we have seen gold-plated Corgis on the market for pretty huge sums but it is really sets like this that I prize. Despite what some may think the gold models might fetch, these farm models and similar regular issues have that certain charm and, in my view, are what Corgis are really all about. 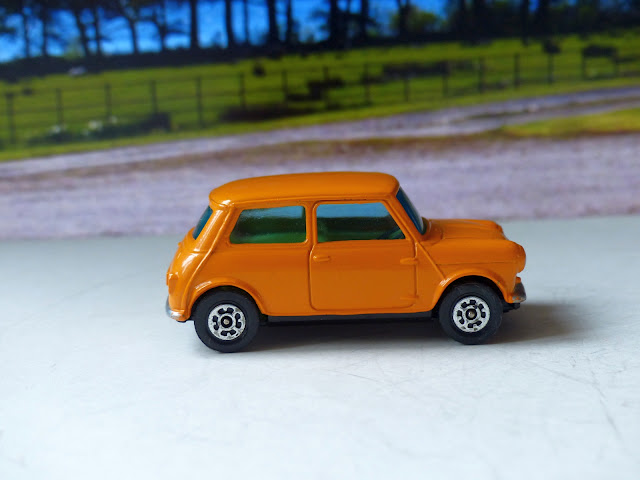 Some nice people in Yorkshire have asked me to sell their little orange Mini. I knew these were quite scarce and even my very battered examples often sell for £50 so I realised that this was something a little special, despite the annoying Whizzwheels.

It did come as some surprise, however, to see just how much one of these in A+ condition with a pretty good late box was worth. QDT had one for £450 a few years ago. The buyer paid £335 which would have finished up as a cheque for not far off £450 by the time the usual auction fees, tax and delivery had been added.

So this is one little valuable item indeed. 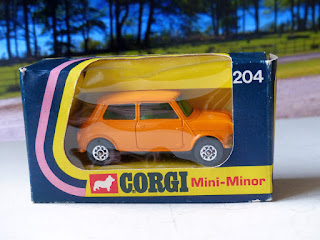 I have to say, though, that I didn't know why.  The 204 Whizzwheels Mini was first issued in February 1972, accompanied at the time by the Chevrolet Camaro, Mini Marcos and Chevrolet Corvette Sting Ray Whizzwheels editions, all of which had seriously short production periods and are now some of the most expensive to buy in good condition. None quite make the heights of the Mini's figures (ignoring for now the blue Mini Marcos which probably would if ever one were to appear).

I can only imagine that the production numbers for the Mini in this short space of time have had to be divided between the three different bases (matt black, glossier black and silver), the different colours (metallic blue, non-metallic blue, orange with a black roof and all orange), the different screens (clear or tinted), the different interiors (yellow or red) and, yes, even different wheel styles (4 or 5 spoke).

OK. Now I understand. In theory that could lead to 96 different models but I am pretty sure that some of these combinations don't exist. Let's say there would be just 20 editions. Even for a production run of a quite massive 100,000 (for those times) that would be a mere 5,000 of each of the different models. Naturally some would be rather more and some rather less but my best guess as to the maximum that could possibly have been made of this particular (more 'normal') model would be 10,000. That is not very many at all. It's very likely that it is a lot less and other people have done the same sums at some time and that, friends, must be why we're now talking about such high price for this little orange car.

Collectors also like Minis. And complete collections. So they'll need this one. Available now. At a price. 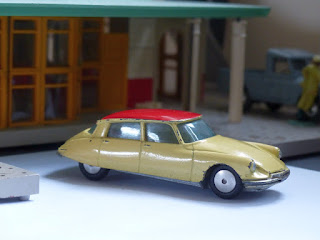 December 1957 and we see the first foreign car. A good choice and still an icon today, model number 210, the Citroen DS19 came in two brightly coloured editions: pale yellow-beige with a cherry red roof and metallic blue-green with a black roof.

This was the first saloon not to have an M version. I believe that there was simply not enough room to fit the mechanism in due to the minimal depth of the rear part of the car. Nevertheless, there are two types of base for the Citroen: one completely flat at the rear axle and another with a small lump.

The lump is similar to the 'differential' unit that the M cars had but is somehow a bit inappropriate as the Citroen was a front wheel drive car! 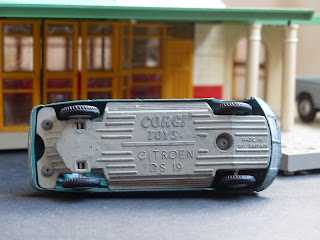 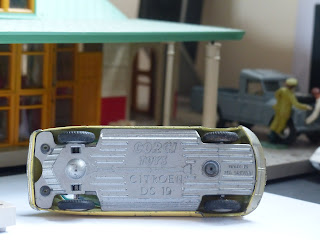 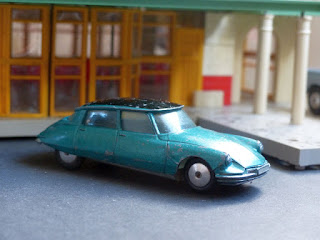 The 210 model gets an interior and suspension three years later. Most 210 models will have smooth fixed wheels but you may find a few with fixed shaped wheels if you're lucky.

Some catalogues also list a red 210 but I am sure this is an error, or maybe a sample of some sort. Red was the colour used for the 210S but I suppose there could have been a few  red bodies made without suspension or interior during the changeover period.

The other new addition to the Corgi catalogue in December 1957 was the Gift Set, and, in this instance, suitably called Gift Set No.1. This comprised a Carrimore Car Transporter and four British cars. 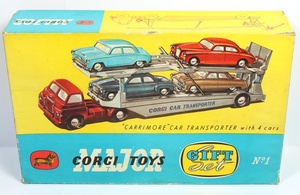 The box illustrated a pale blue Austin Cambridge, red Riley Pathfinder, dark green Rover 90 and brown Ford Consul. Quite what you would actually find in the box in 1957 (and certainly nowadays!) is largely a matter of conjecture.

You would get four models in blue boxes and two 'spacer' boxes. These empty boxes were initially yellow with black text, then yellow with red text and then the Corgi dog logo replaced the text. I don't know the dates for these changes.

Many sets that I have seen have two sports cars and two saloon cars rather than four saloons but it is impossible now to know what they may have contained originally. I know that some collectors are keen to try to match the lid, although they will be hard pressed to find a grey transporter section! You will find both the red and blue as well as blue and yellow versions, however. 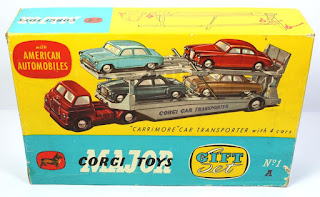 For the American market Gift Set 1 became Gift Set 1A and initially the letter A was added to the lid, together with a label to say that the set contained American cars. This would have been rather later - more like 1959 or even 1960 - as it would not be for several years that there would have been four American cars. By that time a new box lid, featuring a selection from America, France and Britain was printed and Gift Set 1B was the strange 'export' edition. Again, quite what would really be inside I cannot be sure. 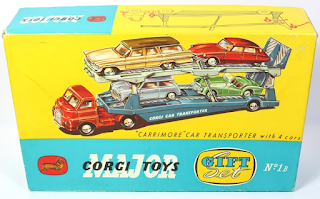