Big Daktari (and a small elephant) 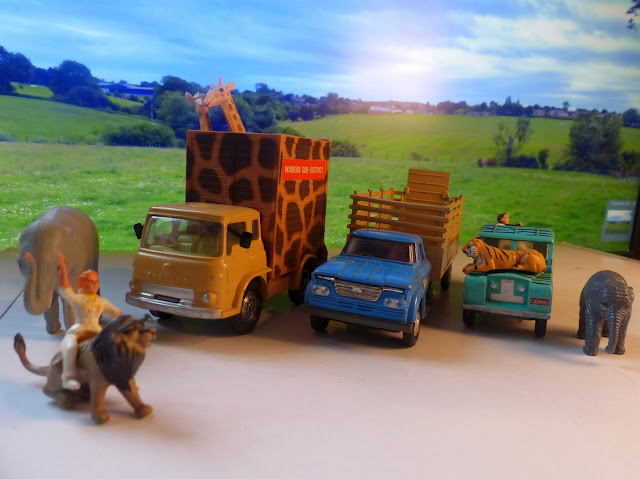 It has taken a while but I finally have all the components for the second Daktari Gift Set. This is Gift Set 14, issued in May 1969 and including some unique items. 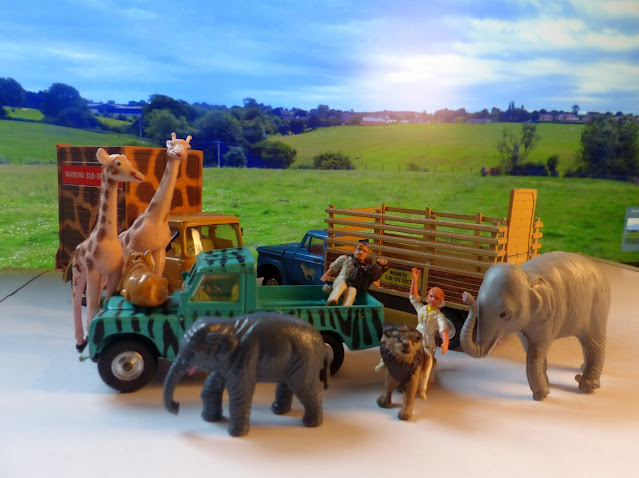 By 1969, the normal Land Rover and Dodge Kew Fargo trucks would have been fitted with cast wheels but it seems that these sets often had both with shaped wheels, as I have here. I don't know the distribution but I would expect these sets to have had predominantly cast wheel editions of these two. You could imagine that Corgi had several boxes full of the Land Rover left over from its outing in Gift Set 7 but that set too was available not only with cast wheels on the Land Rover but with Whizzwheels too! So, if you read the books, you'll be told that Gift Set 7 ceased production in 1969 which was when Gift Set 14 started to be issued. Logically, there really should not be any Daktari Land Rovers with Whizzwheels but, clearly, there are, and many of them too, judging by the low prices most sell at. I think, therefore, we can take it that Gift Set 7 remained in production well into the early 1970s and that, in turn, is much more likely to justify the sales of nearly 1 million, according to the same books. 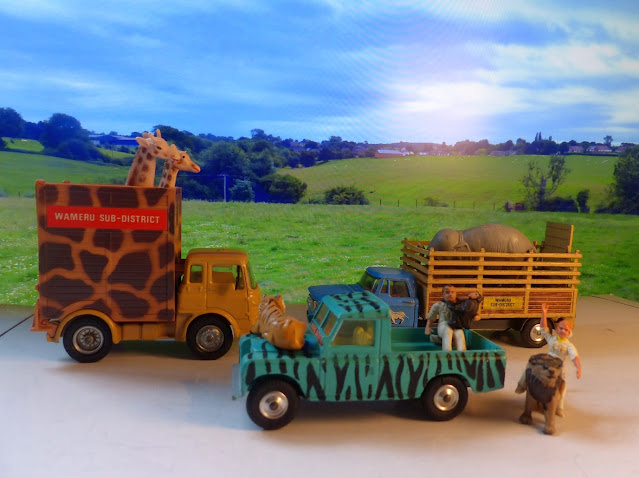 In this set, however, it appears that Whizzwheels were not fitted to any of the models, despite the books telling us that it ran through to 1973. Sales of a mere 100,000 or so, however, may have been just the first few production runs of the models and there was never a need to replace them. It simply did not sell as well and is now extremely hard to find, especially if you seek a box. I have seen two boxes so far in my several years of looking and there are no reproductions being made either, presumably because they cannot get hold of an original to copy.
The Kew Fargo Truck never got Whizzwheels anyway, this being its final appearance in new colours and the Daktari decals being added as paper stickers. Most models suffer from the usual suspension problem, resulting from a bent prop shaft. If you search this blog for Kew Fargo Truck you will find my instructions on how this can be repaired without taking the base off or spoiling anything.
The Land Rover, as I have said, is identical to that issued with Gift Set 7.
The third model is the Bedford Giraffe Transport vehicle, being the same thing as the June 1964 Chipperfields edition getting a fresh lease of life here. It now has nice pale brown paintwork and the carrier section has a two-tone brown giraffe pattern, bearing the Wameru Sub-District decal in red. As with later editions of the Chipperfields version, this truck has the attractive and quite realistic cast wheels as fitted to some later commercial vehicles.
All the Gift Set 7 characters moved to Gift Set 14 with the Land Rover; that's Paula on the lion and the lion has a pair of spectacles, together with the doctor wearing a stethoscope and with a chimpanzee on his lap. These are all present and original here - the glasses and stethoscope are tiny, easily lost and quite hard to find as originals now. Replacements are good, though, and that's what you'll find most people have and it isn't easy to tell without a magnifying glass, although the reproduction spectacles rarely stay in place on the lion.
In the back of the Giraffe Transporter you'll find the same mother and baby as were in the Chipperfields box.
The Kew Fargo truck carries two elephants. The big one is the same as you find in Gift Set 19, the Chipperfields set with a ready-made elephant in a ready-made cage on the back of a trailer towed by a Land Rover. (In the 607 kit both the cage and elephant are in separate parts and, when made, may appear slightly different). The baby elephant is the part you may well find the most difficult to track down. It is noticeably smaller than the other one and has a quite chunky appearance, with trunk hanging down and turning back at the end slightly. It is a dark grey colour. It is often missing and, I suppose, gets mixed up with whatever other animals the owner may have had at the time and, when it comes time to sell his collection the baby elephant will, more often than not, finish up in a bag with several other animals of no Corgi origin. Once the connection is lost it will not be regained and, as a consequence, I spent many months searching for one.
Strangely, both that came to light were found by my German friend and collector, Andi. I have yet to see one for sale in the UK. (Of course, having said that, there may now be a whole herd of them tramping through Great Britain if not the Channel Is!) Many people, unable to find the correct one, have substituted another, and I have even seen imposters in place of the comparatively easy to find mother elephant. The trunk and how it is shaped is the best thing to look out for in both cases.
As they stand, the group is probably worth around £200, which at a mere £60 or so for each of the principal elements + their content, is not very much when one considers just how difficult is is to get everything. Add a box, however, and the price sails up to £600, (a lot more at one of the auctions I've seen!) So I shall not be selling any of these just yet. Indeed, I fear it may be some years before a box comes along but they'll still represent an excellent return on investment, I'm sure.
Posted by Andrew Hill at 17:42