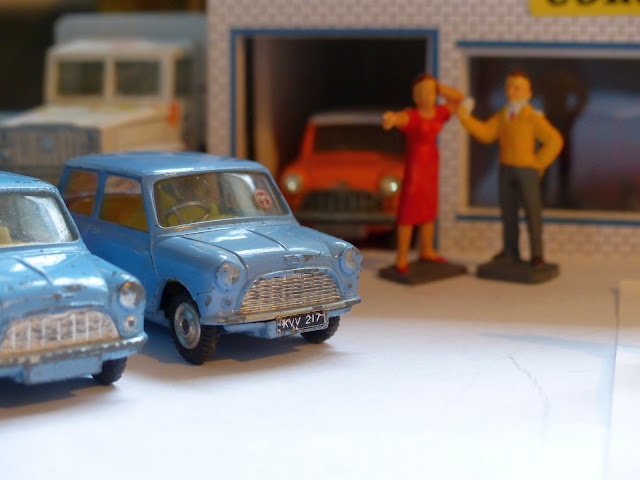 My fellow collector, Andi from Kneitlingen in Germany, will shortly have an interesting pair of Corgi Minis. I was successful in acquiring for him a blue Austin Seven to sit next to his red Morris Mini-Minor.
These are quite delightful production errors, where it would appear that an Austin body gets included with the Morrises and gets sprayed blue and then attached to a Morris base and escapes the attention of the Quality Control chap. He also misses the occasional Morris body that gets a red coat of paint and then attached to an Austin base, an example of which my colleague discovered a while ago.
Bids for this particular model were sitting happily at £2.20 for most of its period on sale and I did wonder whether I might finish up getting the Bargain of The Year but in a frenzy of digits on screen at the very last few seconds it rose to £120. One other individual had spotted the Austin badge on the blue bonnet in the seller's photos but his efforts were in vain as my colleague's top price was just slightly above the other player's.
The Morris has a type 1c base - clearly narrower front section below the bumper - which is normally used with those models fitted with free spinning wheels but this one has fixed, shaped wheels. The Austin is an earlier edition with a type 1b base with the wider lower front bumper section, more normal with fixed wheels too.
I am sure these variations will be found amongst earlier and later models too, although I doubt we'll see a maroon Austin Seven. 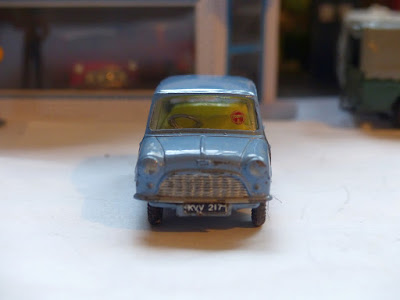 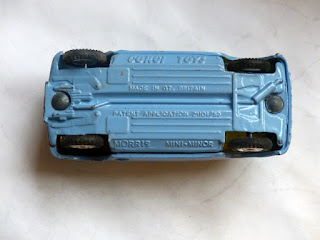 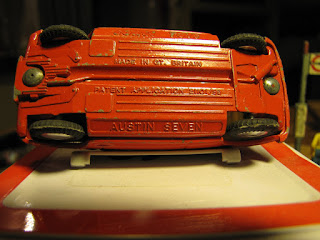 I would love to find these for myself some day. In my own collection I have a primrose Austin on a Morris Mini-Minor base and two Morris Mini-Minors on Mini-Cooper bases but these don't look particularly different on display as the bodies are essentially the correct colour for the badge. That's what sets these two models apart and a quite valuable pair.
Posted by Andrew Hill at 13:19