Someone asked me this afternoon why and when I started what has become this Corgi Toys business. I say what has become because what I'm doing now is not what I had originally planned. I took her back to the mid-1960s and my first Corgis. That meant I had to try and recall just what my first model had been. As my father worked for an agricultural machinery depot, the first items may have been the Massey Ferguson tractor and trailer Gift Set 7. I know now that it must have been the early one as there was no Farmer George on the seat. I also had Gift Set 2 but, as that had a deep green Series II Land Rover it would most likely have been Christmas 1962 so that wasn't the first. 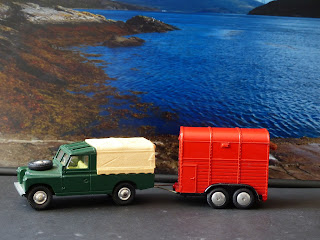 I did have a 216 Austin A40 but I only bought that at a later stage because I wanted to paint it red as my father's was an A40 Countryman version, red all over. (There were no 216Ms available at that time or I'm sure I would have spent the extra 3d and just painted the roof!)

I am pretty certain that my first car will have been the Jaguar E Type. It was the plum red version which, coincidentally, I have been looking for for some time now. Back then everyone had the plum red version and I didn't even know the pretty metallic dark grey existed. That, as it happens, was also one of the very first models I acquired when I did start this business. Now all that is see for sale are the metallic dark grey versions. Odd, but probably just one of those things. Mine had the matching plastic removable roof and both survived intact and more or less unmarked for more than 50 years. 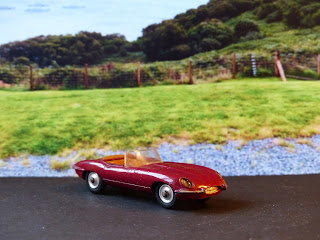 Second would have been a gold and white Triumph Herald with its little removable black air filter on the engine accessed by folding forward the whole of the upper front body section.

I know that the Bentley Continental was available but it was expensive at 7/7d. (That strange looking price construction means 7 shillings and 7 pence. In 1961 there were 20 shillings in a pound and 12 pence in a shilling. 7 and 7 pence as we would have said then is about 38p in today's decimal currency.) I did get a two tone green model but suspect that came as a present in 1962. What I did get next was the Mercedes 220SE. I had a black one and think I still have it too. The paintwork did suffer a bit but that wonderful steering meant that it was played with a great deal.

Apart from the Austin A40, which I don't really count as I didn't play with that, the only model I had with fixed wheels was the Austin Seven. I remember how much better it was to play with the Morris Mini Minor which I bought later. I also didn't have any models without suspension and was completely unaware of the early models and certainly knew little of their Mechanical cousins. 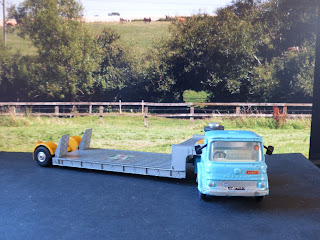 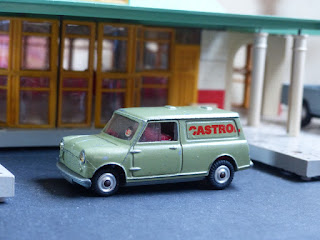 By 1963 I was in the first form at school and getting enough pocket money from odd jobs and saving dinner money to buy almost every new car that came out. I say car because I had little interest then in the commercial vehicles. My father bought me a Bedford Machinery Carrier, to which I applied an Agricastrol transfer, and I also had a Carrimore Car Transporter but that was pretty much the extent of my trucks or vans. Just one exception - an Austin Mini Van, which I found great fun to play with as you could put a finger or two through the rear doors and kind of drive it and push the back out round corners!

Just as these memories flood back now, so they had done in 2013 sometime when, having retired from lecturing and helping to introduce technology in education, Corgi Toys were one of the first things that came to mind when I thought about starting a new business. My plan was then to buy wrecks and restore them. I bought all sorts of equipment which I thought would be useful but it wasn't long before I realised that collectors were not very interested in restored models. They much preferred an original, even if it was not in great condition. I had hoped to get £20 or more for decent restorations but you could buy played-with but still decent originals of the more common editions for that amount.

So the restoration plan was binned and I carried on the other part of the plan which was to build a nice web site that could be a useful and genuinely comprehensive catalogue too. That took shape in 2014 and I bought lots of models with money inherited when my mother died. Once I'd taken some photographs and studied the models I began to sell them so that I could have funds for the next ones required. It just carried on from there.

I never expected it to be much of a business. I hoped people would enjoy reading my news from time to time and I tended to write about whatever came in as and when it occurred to me. It still tends to be that way although the Corgi Toys @ 60 series I started in 2016 has provided some structure. The rest is rather random as anyone who is still reading this will have appreciated!

I have since had a look at Ebay and there are models I've had for sale there for over 5 years! Clearly I am either asking too much or the photos are bad or the descriptions are poor. Maybe all three. Now there's a job for the next few weeks - to try and revive interest in these. I get a number of models listed free but, as my total number of items is well in excess of that, these listings have effectively been costing me a few pence every month and 60 times x pence means I've probably spent more listing them than some are worth! Expect to see some 'special offers' soon!

For those who may also have played with Corgi Toys in the 1960s, my layout was a piece of hardboard that my father had cut to fit nicely over the metal frame of a single bed in the spare room at the first house I lived in. I had made roads using thin strips of masking tape with additional edges from various pieces of Floral Garden and Bayko. Bayko provided a few nice buildings and garages that cars could actually be driven into. The Floral Garden stuff was quite delightful too. I would love to get some again but prices are even higher now than Corgis!

The one Corgi building that I had was a BP Filling Station. Well, it was the shop part and some sort of panelled bit at the side. No pumps but I may have had a BP sign. As I recall I could choose between BP and Shell logos (although the box image I've found just refers to Shell. Were there two?) I still have this tucked away somewhere. I should get it out and use it for some of the photos in future if it is respectable still. I have been looking to buy some kits but they are mostly very expensive. In fact, I'd be happy with a made-up kit rather than the unopened bag of pieces.

Looking to add pictures, I couldn't find any of the Filling Station building, which I had. I shall have to dig out my own - and seemingly take good care of it!

So that was a pleasant trip down memory lane.