Here are the new items on the shelves at your local toy shop in October 1960. Quite a selection! I guess this might have been some sort of planning for Christmas too as no further models were apparently released that year. 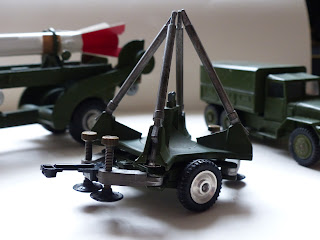 The first is the launch module for the Corporal missile. It's a highly detailed and wonderfully well-engineered little thing, with stabilisers or feet which screw down individually to ensure correct positioning on uneven surfaces. The wheels can be removed and the support arms fit into grooves on the side of the missile. It has a tow bar and would usually be pulled along behind an International Army Truck with which it appears in Gift Sets. This item would in most instances have been obtained in one of the Gift Sets with the missile and maybe with the Missile Carrier vehicle too so it is unusual to find it in its own box these days. Very few were sold individually, one in a good box now being well worth getting hold of. 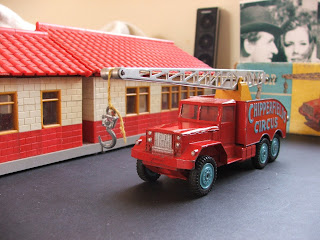 Another Corgi Major and the first Chipperfields Circus model arrives in the shape of the International Truck now with a re-worked rear section that carries a jib. Compared to the army models this is rather basic and crude engineering. The jib is bare metal and raised by hand in three steps on a simple ratchet device. There's a large and not very pretty handle to lift or drop the hook.
The six wheels are now painted Circus blue and the old truck gets an extension to its life. Indeed, it will even get suspension later, which the army version never does. 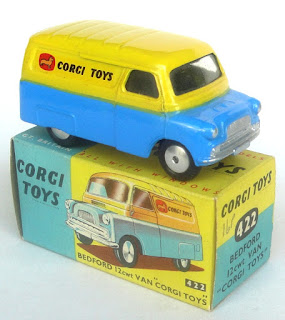 Amongst the commercials Corgi produced another Bedford CA Van with a single screen and revised front end, appropriately bearing Corgi Toys transfers. It gets a new catalogue number, 422, following on from 421 for the Evening Standard version. To the confusion of children then, but much to the delight of collectors now, Corgi seemed to be unable to make their mind up for some time as to where the blue should go and to what extent. So you will find this half-and-half model as well as one that is blue but with a yellow roof and another that is yellow with a blue roof.
The last combination is the one that is by far the most common, the other two being really quite expensive to acquire now. Indeed, I have had to steal a photo of the 50-50 edition from QDT as I have always been beaten in bidding to date and it has not turned up in any collections I've handled. 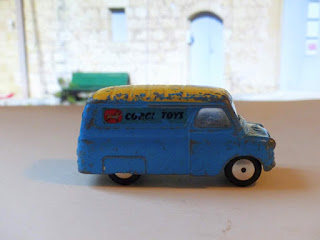 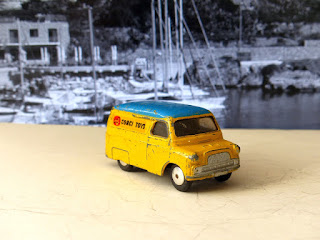 The wheels are usually smooth on these models and, from my research, exclusively so for the two less common types. The yellow model with a blue roof has shaped wheels on its later issues. 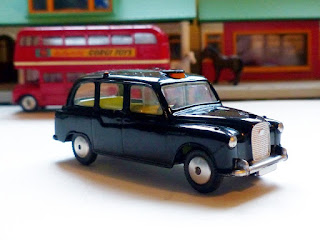 418 is the Austin Taxi. It appears here for the first time in an extremely long run as it will stay in the catalogue right through to the 1970s when a 1:36 scale version eventually replaces it. I think that makes it the longest-running model without a change to the body. Land Rovers and Minis have a good life too but they get quite a few adjustments made along the line. The Austin Taxi stays just as it was in October 1960, getting only different wheels, interior colour, screen tint and a couple of drivers at various points. 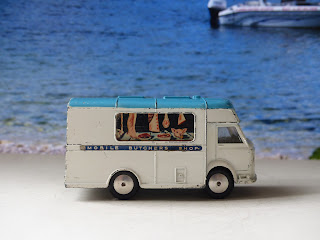 Another commercial and another outing for the Karrier Bantam, now as 413, a Mobile Butcher's Shop. It's very similar to the 407 Mobile Shop, little changing over three years and this has the same style of metal with illustrations visible at the rear and paper stickers at the side and front. Early editions have smooth wheels, later ones have shaped wheels, all fixed. 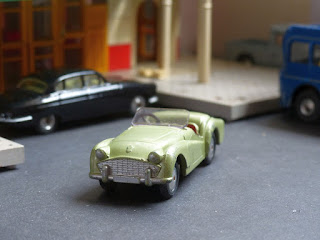 Two cars are issued too this month - the TR2 gets a re-worked front end and becomes a TR3. It is always in a pale metallic olive-green with red seats. Early editions have smooth wheels and later ones shaped wheels but always fixed. Although production continued for some years I don't believe any got free spinning wheels. 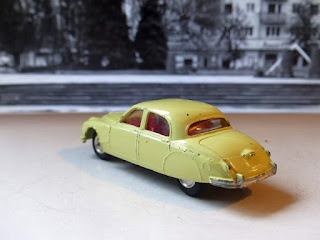 The final items on the October agenda is the revised Jaguar 2.4 Litre, now as 208S and with an interior, suspension and a coat of pale yellow paint. Again, early editions have fixed smooth wheels and later ones fixed shaped wheels. This doesn't get free spinning wheels.
Posted by Andrew Hill at 13:39