A very nice example of the Ghia L6.4 in gold arrived this week. As well as having only the slightest marks on the paintwork, this one has good suspension all round. I shall not tempt providence, though, by racing it around the carpet. Not many of the older models have survived 57 years so well, the brittle plastic which provides the suspension being very prone to breaking.
Having to press down on the front to open the bonnet tends to ruin the chances of the front end staying up so that's often the first to go.
Incidentally, the piece of plastic that pushed up through the air filter to lift the bonnet and the piece that is visible when the boot is open are both cream, as the interior, on this model. Many metallic blue editions, and some gold ones, that I have seen have had red in those two places although still cream interiors.
A later edition lemon gold model sold for £176 on Ebay this week, a quite remarkable price, even with a box, as I had never regarded that later shade as being particularly scarce. My 'order of scarceness' and hence value would be:
1 Copper
2 Sage green
3 Gold
4 Metallic silver-blue
5 Metallic blue with cream interior
6 Lemon-gold
7 Metallic blue with red interior 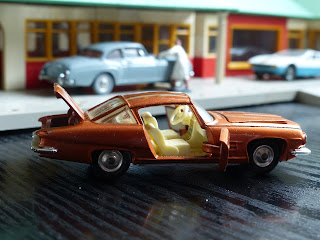 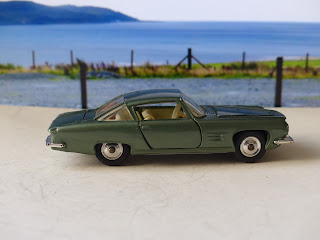 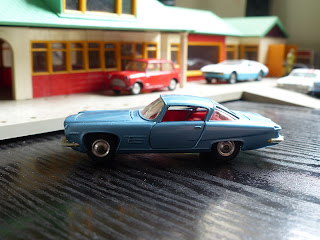 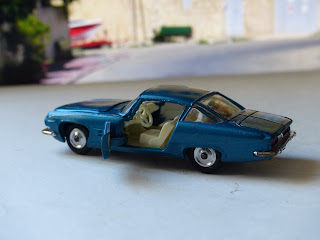 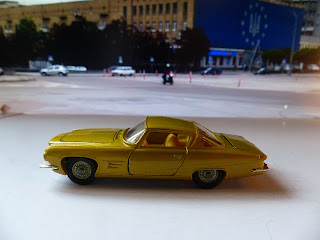 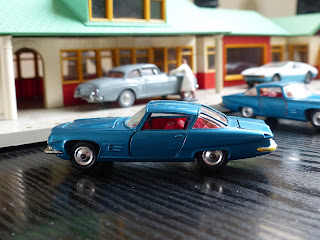 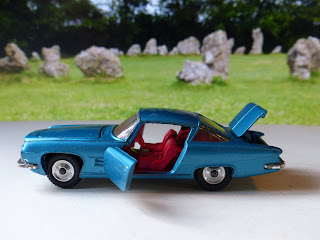 There are many variations of 'blue' in 7 but I have yet to distinguish any obvious groups. There seems to be a possible group in a deep blue-turquoise shade and another in just plain deep blue but one tends to merge into the other and I can't draw a strong enough line between them yet and, in any event, all the 'blues' (as opposed to 'silver-blues') are still the most likely models that you'll find, vastly outnumbering the others.
And do remember what I said in the earlier article about the rear wheel tyres!
Another Ghia also arrived today as I was writing this. It is the Ghia Mangusta De Tomaso which, despite only being around for about a year in this form, also has three notable varieties. Early editions have a Ghia logo on the bonnet which was replaced by a T (De Tomaso) logo at some point. There are also two types of chassis. One has an all steel engine unit, the other has a gold unit. 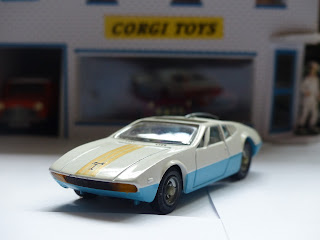 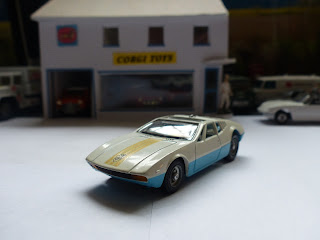 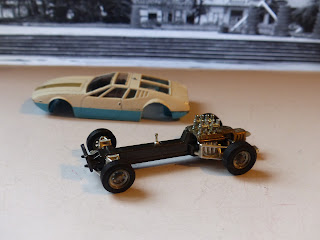 I have one with the T logo and an original intact aerial in a good original box which will be added to the shop and listings in a few days.
The similarly short-lived 203 model with Whizzwheels is also due in soon and that will be the first of those that I have had with an original intact aerial too! It also will have a good original box. Although quite a lot more scarce, the Whizzwheels edition has yet to match the prices people are prepare to pay for the 271 model with an aerial. Without an aerial both remain cheap - at least until someone comes up with a good replacement that can be fitted reasonably simply. 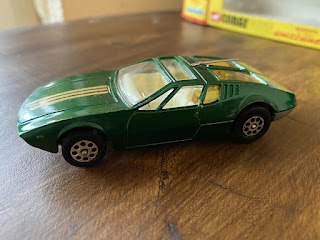 The other Ghia models are the little Fiat 600 Jolly in Ghia form which has light and dark shades of metallic blue as well as a mid blue non-metallic finish for the 240 model and just the one yellow for the 242 model. All of these are expensive now. Then finally there is the Volkswagen Karmann Ghia 1500, the first Ghia from Corgi, which you'll find in cream, red and gold. There are yellow and red interiors for the gold model and the red may have cream or yellow. Finding models in good condition that still have the little brown case and the spare wheel is not that easy and the gold models seem the scarcest. To date I have only had fairly well-worn examples of the gold Volkswagen. 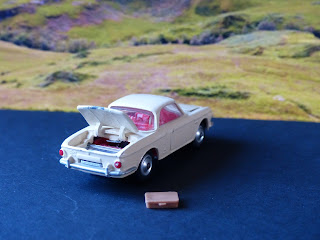 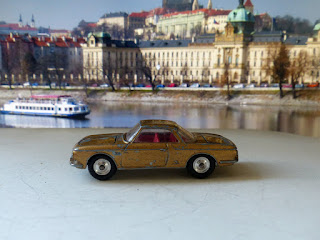 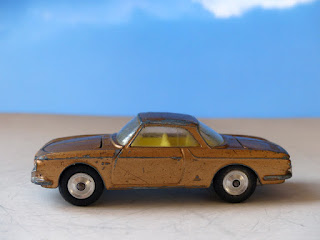 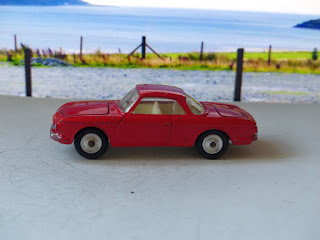 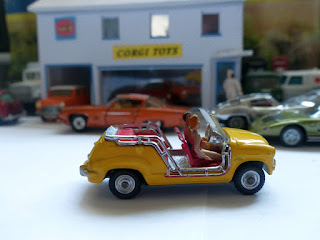 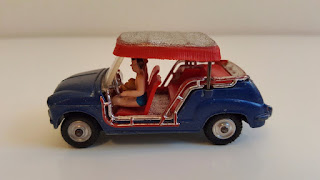 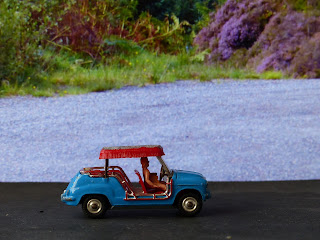 I have yet to find a lighter blue metallic Fiat Ghia Jolly and I have to say that I am not a great fan of the 240 model with its ridiculous roof! So the idea of paying more than a few pounds for the missing model goes against the grain.
So you'll see that you could have quite a task on your hands if you decided to get a complete 'Ghia collection' together - and it is something that I have not achieved yet myself!