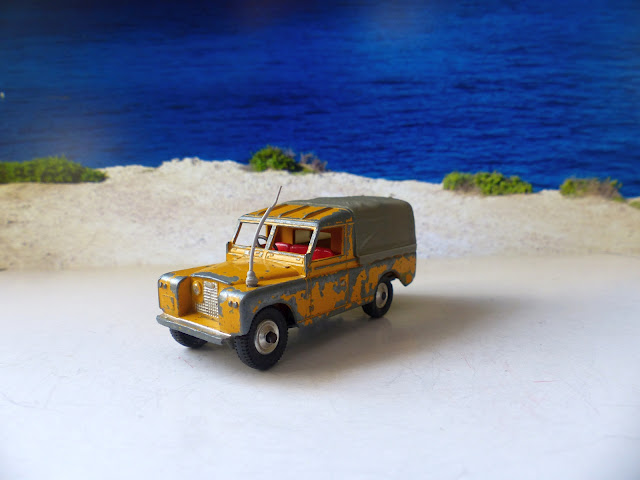 My German friend Andreas is particularly good at spotting interesting Land Rovers for sale, unearthing a lovely 438 in deep green with red seats a couple of weeks ago, and last week bringing to my attention what he described as a 406S with an aerial hole.

At first I thought it might just be a mark on the wing but, no, there was a neat hole where an aerial would have been fitted. then I realised that there was no spare wheel on the bonnet, nor sign of there ever having been one and the only Land Rover which doesn't have a spare wheel on the bonnet and with a aerial hole is the 416S. I then noticed that this was for sale in Belgium and the mystery is solved. This is a 416S Belgian rescue service Touring Secours edition, albeit in a bad way. 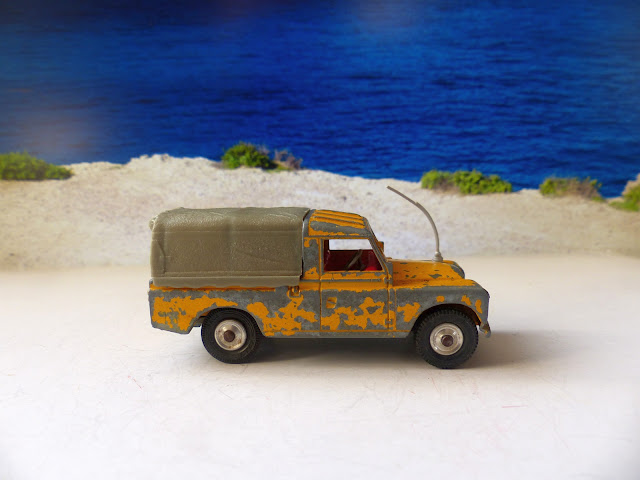 The windows were all badly broken, with holes not just cracks, and so I decided it would look better without any. I had been fooled by a Daktari Land Rover in an otherwise immaculate Gift Set 7 box which a customer sent me as part of his collection some years ago. That too had no windows and I didn't notice for some time. To be honest, this model's lack of protection from Belgian rain or wind is pretty obvious but I still maintain it looks better than it used to.

The interior survived the operation which was a relief as had that been split or broken then I would have had to take the thing to bits. As it is I am inclined to keep it intact. These models are very scarce and, although in very sad condition, with no hook and the wrong canopy, it is the only one I've had and am likely to have for many a year.

I can do something about the hook and I may be able to patch up the paintwork with the help of a friend who mixes pots of colours which seem to have no relation themselves to the desired colour and yet the result she achieves is perfect.

The windows will have to stay paneless and I would like to do something about that replacement aerial. I do wish Mr Flowers Model Supplies would stock some better aerials than the annoyingly inappropriate and odd-looking ones they supply at the moment. We need aerials for all sorts of models and a nice, finer design with a gentle curve would sell very well, I'm sure. Update: I have found a marginally better one and changed the photos here but it's till not very good.

Another update: I made some labels for the RADIO text and TS logo. They're accurate but the transparent film I have to use is a bit too thick and the paintwork doesn't exactly help to display them! The cab now has front windows too. As I'm unlikely to find any other in a hurry I have had to make the most of what I have! 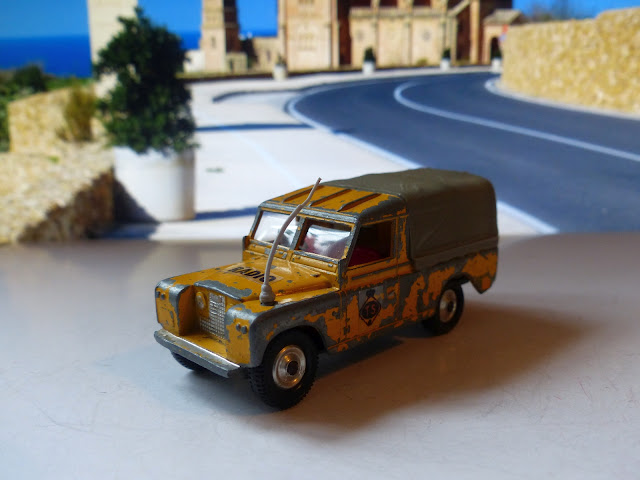