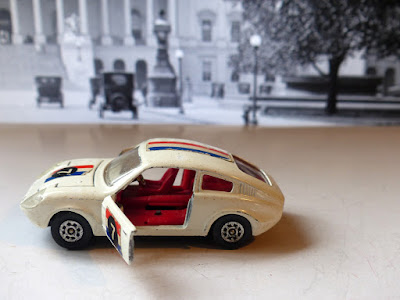 The 305 Whizzwheels version of the Mini Marcos is lacking a passenger seat but has more paint than any others I have seen for a long time! I have no idea when I'll find another seat, though. So I expect it will be around for a long time. 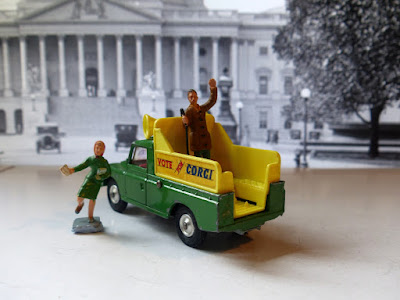 This Land Rover has been in a drawer for several years but I finally found a girl handing out leaflets at a reasonable price. 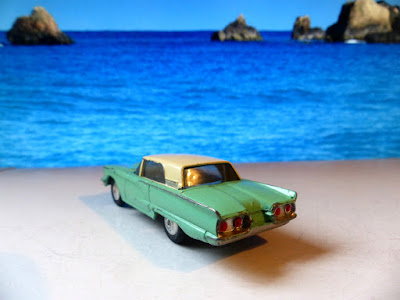 Another collection is completed with the arrival of this 214 Ford Thunderbird. It looks pretty normal but is the scarce version with smooth wheels but no 1959 on the rear plate. There are three versions of each of the 214 and 215 models: smooth 1959, smooth blank and fixed shaped blank. 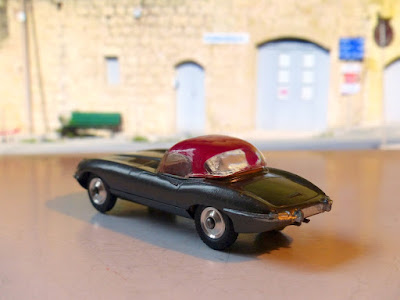 Having sold the lovely dark grey E Type I had to get another one. These are one of my favourites. Although they were only issued with the plum red top, I do like the black version of the canopy that Mr Flowers sells. 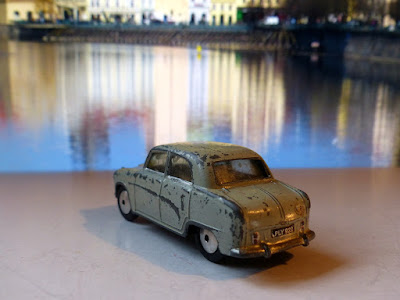 This pretty well-weathered Austin Cambridge is the 201M edition and was advertised as 'white'. I had assumed it was cream or grey, colours I know about. It turns up, though, in a sort of green-grey-brown shade which is entirely different. I have no idea where this comes from and it may be a sample which found its way into the playground. All quite original so I'll see what others have to say about it. 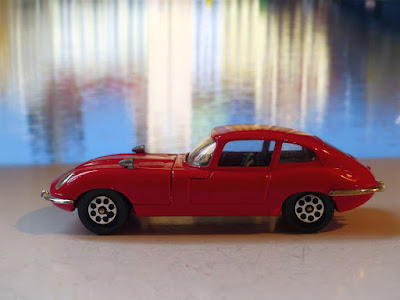 As well as the dark grey E Type, I also sold the later Whizzwheels 374 version of the bigger 335 2+2 model in red. This is a replacement of the 4.2 version which was not around for long and of which most versions are yellow. It was superseded by the V12 5.3 model, also apparently entirely in yellow. 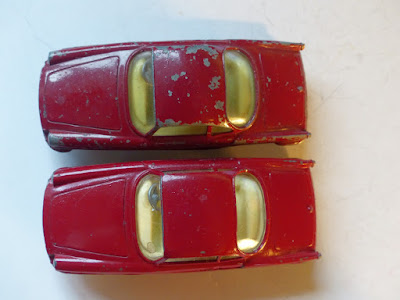 On the subject of red and yellow I bought my umpteenth Renault Floride in the belief that it had closed vents only to discover that it hadn't when it arrived. Someone will have to put me out of my misery soon and find me one with closed vents as I am failing miserably to identify them from people's photos. This one is a bit messy but it does have a lemon plastic interior instead of the cream colour of all my other models in red. 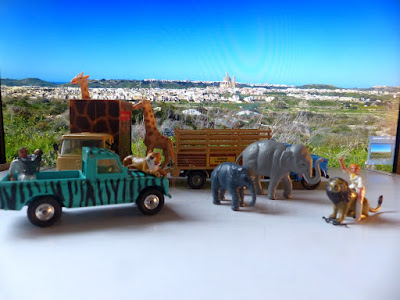 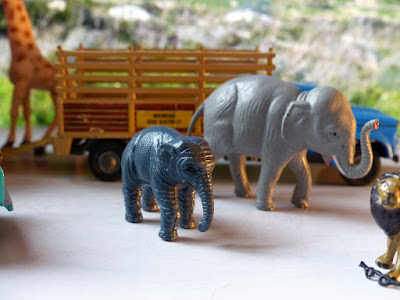 A small dark blue-grey elephant has finally, after a long search, completed my Daktari Gift Set 14. A box would be nice but they're simply not to be found. This is an impressive set which is almost all original - just the lion's glasses are replacements. I have made this by extending the Gift Set 7 that I had in an original box and now realise that I need to replace the Land Rover with one with cast wheels which is what would have been fitted when this Gift Set 14 was issued. The Giraffe Transporter, Kew Fargo Truck are also unique to this set, along with the elephant. The elephant is by far the hardest to find, though! 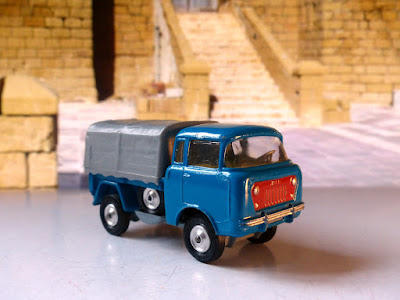 The Jeep FC-150 was around for a long time in the Corgi catalogues, starting without suspension or interior and finishing up with both and cast wheels as well as a plastic canopy. This version with shaped wheels can be found with either lemon or red interior. I am not sure whether both can be found in cast wheel editions. 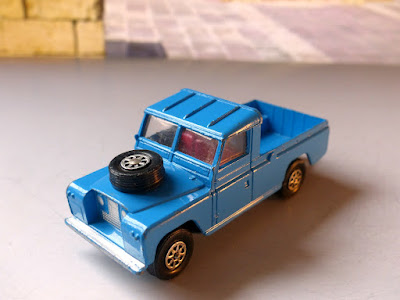 Another rare Land Rover here - a Pony Club Gift Set 15 model with Whizzwheels and a red interior. Similar to the deep green 438 edition, most were fitted with lemon interiors so these red versions are quite sought after. 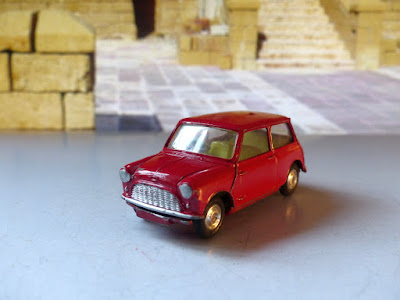 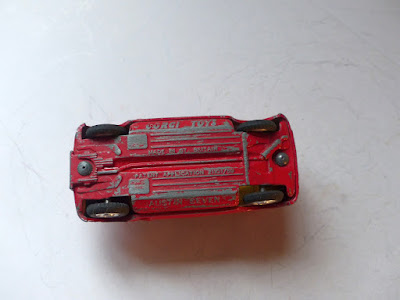 Another little model which looks pretty common but is actually quite scarce, this Austin Seven has what I term a Type 1c base - with a narrow front section to the base and the earlier text layout. With the fixed shaped wheels, this edition will have been likely only to have been produced for a short period in 1962. 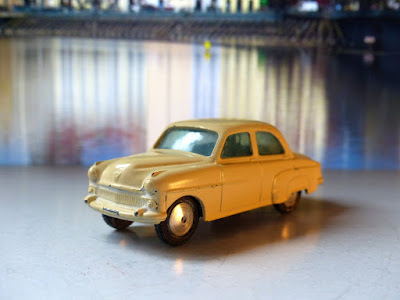 I didn't notice at first and it was only when I was preparing to advertise this 203 Vauxhall Velox that I noticed the lack of silver paint. Anywhere. I am familiar with some models which did not get the two streaks on the bonnet but this is the first I have encountered with none at all! 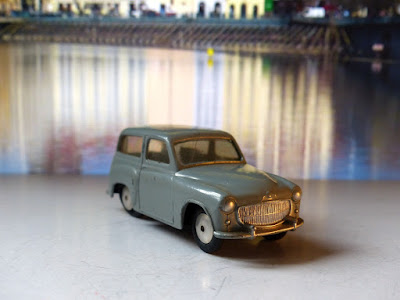 With the Vauxhall came a nice little Hillman Husky 206M with a decent motor. 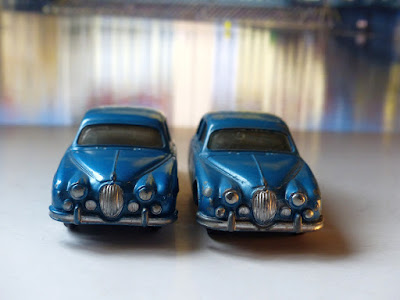 From the same collection as the Vauxhall and Hillman came these two fine 208M Jaguar 2.4s. Very minimal wear to either model and they are quite special with good motors too. Although not obvious from this view, the two cars are slightly different shades, one being noticeably richer and brighter than the other. 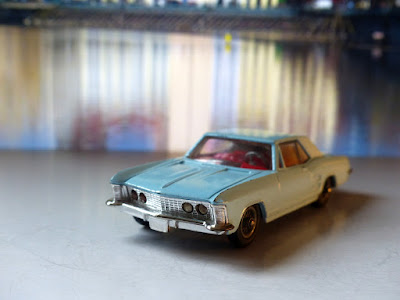 I love this Buick Riviera in the pale blue finish. The colour does tend to show every little flaw to the paintwork so it is a true delight to find one like this which is near immaculate. I am very unlikely to part with this in a hurry. I can see that it is going to have its photo taken rather a lot.